I’m writing this sitting on the train coming back from Campbelltown Stadium. We’ve just passed Minto, so this seems like as good a time as any to reflect on the most difficult fact about today’s game between the Wests Tigers and the Gold Coast Titans: namely, that this was much more of a Jarryd Hayne comeback than a consolidation of the Tigers’ brilliant performance against the Cowboys at Leichhardt last weekend. As we passed through Minto on the way, I reflected that this was probably going to be a fairly emotional game for Hayne as well: after all, he’s now come full circle, returning to Sydney’s western suburbs for his first full-length game of NFL since departing Parramatta for the United States eighteen months ago.

It felt appropriate, then, that this afternoon’s match felt like a vehicle for the former 49er, with Hayne putting in what amounted to two try assists – including a dash up the field that almost amounted to a try itself – and clinching the game for the Titans with a field goal kicked ten seconds before the final siren. Watching the last minute of the match from the stands, you could almost see it coming – all the pieces were in place – and the Titans seemed to feel the same way, with the team all making way for the Hayne Plane to have the final say. Even at five-eighth, it’s clear that Rugby League is Hayne’s natural game, and I’d say it’s only a matter of time before he slots in at the back again, especially given his ability under the high ball over his last two appearances.

While there was something powerful about seeing Hayne finally come home – to Rugby League, to the NRL, to Sydney’s west, to Minto – it was a pretty bitter pill for a Tigers fan to swallow. Personally, I can’t think of a worse way to lose than a field goal to Hayne, and if last weekend’s home match erased some of the memory of Cooper Cronk’s field goal during Golden Point earlier in the year than Hayne’s final one-pointer brought those memories flooding back. Yet again, it seems, the Tigers have brought an incredible momentum to key episodes in the game but haven’t quite been able to pull through. 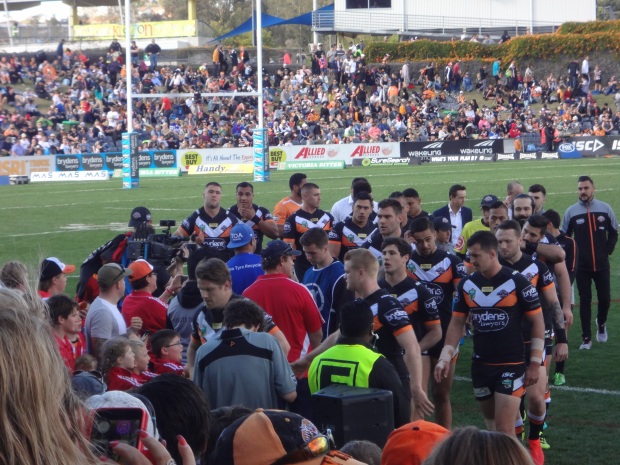 The conclusion was all the more galling in that the team got off to an incredible start in the opening minute, with Kevin Naiqama putting in a play and setting down a try that was straight out of last week’s game against the Cowboys. For a moment, it felt as if the Tigers were not merely going to rival but actually outdo their momentous performance against North Queensland. As someone who has been in the stands both weeks, it felt as if I was simply watching a continuation of the first game, and that the Tigers would use the good fortune of having two home games in a row to really consolidate and cement the winning streak that has been eluding them all season. 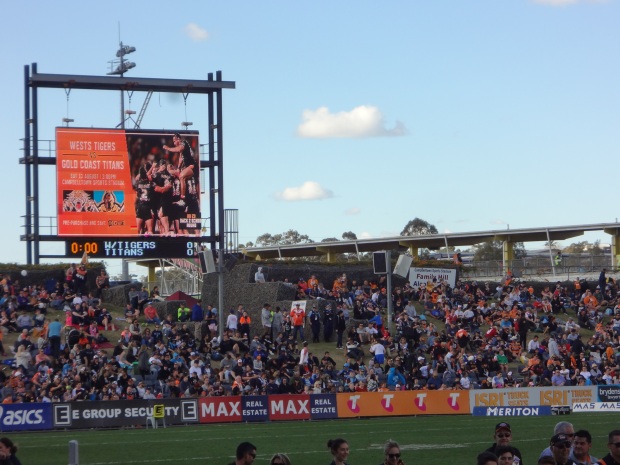 That they didn’t has to be attributed, in part, to the continuing absence of Luke Brooks as well as Teddy’s removal from the field in the second stanza with what appeared to be a broken jaw. At various moments in the last twenty minutes it felt as if Mitchell Moses, in particular, was executing moves that needed his natural synergy with Brooks to really come to fruition, while the mounting tension and increasing determination of Gold Coast really called out for the kinds of ingenious and improbable last-minute moments of inspiration that Teddy has made his own. Put simply, if there was ever a game when the Tigers needed their no. 1 there for the dying minutes, it was this afternoon, and a sombreness fell over the stadium and the team after Teddy was led off that was light years away from the exuberant sequel to the Cowboys victory that opened the match.

Still, some responsibility has to lie with the team, and this was very much the inconsistent Tigers outfit of the first part of this season, rather than the increasingly lean and disciplined outfit we’ve seen over the last couple of weeks. Certainly, some players were as consistent as ever – David Nofualuma, in particular, doesn’t seem capable of a bad game, bringing in two of the Tigers’ tries, while Kevin Naiqama and Aaron Woods both put in pretty bracing performances. Still, Tim Simona was uncharacteristically quiet while Dene Halatau had a fairly uneventful afternoon for his last big send-off by the boys and the fans.

It was Moses, though, who really struggled to come up with the goods. If this afternoon’s game was a match-up between Hayne and Moses, then there could be no doubt as to who came out on top. While some people might not have been surprised that Hayne was ascendant, I genuinely believed that Moses had a chance to show him how it was done – and, what’s more, that there were various moments in the game at which the Wests Tigers no. 6 was the better man on the field. Still, Mitch’s inconsistency with the boot was more painfully evident than it has been at any other moment this season. It’s one thing to miss conversions consistently, but another to miss the kinds of penalty goal opportunities he was offered, and the game could have been won by the Tigers at any number of moments if Moses had managed a bit more focus and direction.

Of course, Moses would probably be the first to admit this, and to their credit the Tigers supporters in the crowd didn’t give him much of a hard time. Still, it was the kind of kicking performance that made me realise how much the Tigers’ inconsistency often comes down to Moses’ inconsistency – one of the most mercurial players in the NRL (and certainly the most mercurial in the Tigers), he can rally the whole team around him when he’s on point but can also diffuse the momentum and adrenaline when he has such a bad kicking run. Last weekend I wrote that he had a bit of a captaincy strut and swagger to his game, and I’ve increasingly felt that some kind of leadership opportunity in the club is perhaps what’s needed to bring Moses’ sense of focus and clarity to the next level.

All of which is a roundabout way of saying that this was a fairly disappointing match for Tigers fans. In many ways, it wasn’t all that different from many of our losses early in the season – including the loss to the Storm – but that’s just what made it so crushing after such a string of great games, culminating with last week’s victory over the Cowboys. The fact that it was lost to a Hayne field goal just made it that little bit worst – for a long time, the Tigers have been forced to occupy the shadow of celebrity teams and players, and now that they’re just starting to get a little bit more celebrity pull themselves it was pretty disheartening to see them go down to the NRL’s biggest international celebrity. 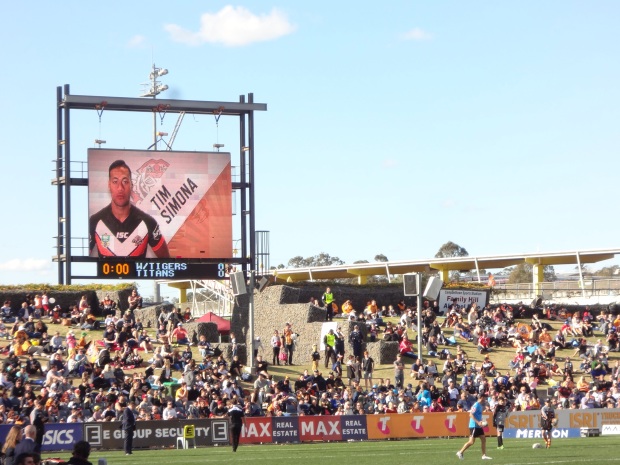 Still, there were plenty of good moments, from Naiqama’s opening dash to Nofualuma’s double-whammy. Similarly, it’s worth remembering that – even without Hayne – the Titans are a very good team by this point in the 2016 season, and would probably have been expecting a greater win margin than what they actually achieved. Still, Teddy’ season-ending injury has inevitably put a bit of a dampener on things, although I’ll look back on his brilliant form in 2016 in another post. For now, full credit to the boys for a good game, and here’s hoping that they manage a genuinely great game next round – even without Tedesco – since this afternoon’s loss just makes it all the more important that the Tigers rally and recapture the spirit they’ve shown over the last couple of weeks.