With a team like the Wests Tigers, it’s often a matter of losing well rather than winning outright. Nobody in their right mind, however, could argue that last night’s match against the Panthers was a good loss or that it demonstrated the Tigers in anything other than a state of defensive disarray, a situation that was all the more confronting in that the team had put in one of their very best performances of the season against the defending premiers at Leichhardt Oval only two weeks before. For the second Battle of the Cats for 2016, however, the story was very different, with the Panthers putting in an utterly dominant display to come up with their biggest halftime lead against the Tigers (28-4) since 2003.

Add to that the fact that Penrith managed seven line breaks, dominated possession and field position, and managed to make the Tigers cough up 49 missed tackles, and it was a display that led some pundits to beg the question as to why Robbie Farah continues to be relegated to reserve grade. For my money, the Taylor-Farah feud is done and dusted – it’s probably better for everyone, Robbie himself, if he just carves out a new spaces for the last part of his career at Souths – but it was the kind of game that made you want to blame someone or something, since it’s painful to watch a football team in such a state of chaos. 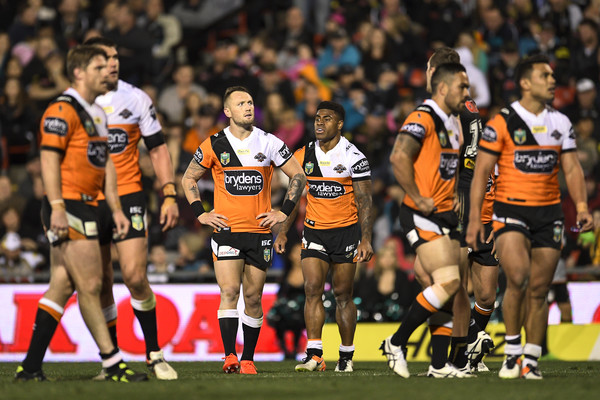 As with the game against the Titans the week before, the Tigers actually had an amazing burst in the first couple of minutes, but things went south pretty quickly after that, with the team letting through some of the softest tries of the season in the buildup to half time. The most spectacular of these was undoubtedly the first, with Dallin Watene-Zelezniak breaking straight through the line on a kick return to hand the Steeden to Waqa Blake, who then ran the length of the park to put down the Riff’s first four-pointer at the eleven-minute mark. In both its dexterity and its speed and conviction, it was a move that set the scene for much of what was to follow, with the Panthers building off the Tigers’ fragmented defensive line with a series of rapid play-the-balls and deft offloads that seemed to leave the boys in black and gold a couple of moves behind, scratching their heads to figure out how the latest try had just happened.

If DWZ’s try assist was spectacular, however, there was a different kind of spectacle in seeing wave after wave of Panthers discovering that the Tigers’ defence was effectively non-existent, with Bryce Cartwright (18), Isaah Yeo (24) Reagan Campbell-Gillard (29), Peter Wallace (39), Trent Merrin (48) and James Fisher-Harris (57) all seeming to stroll up to the line without much interference from the visiting team. Both in the middle of the park and at the goal line, the Tigers didn’t seem to have any real conviction or interest in preventing points, while the Panthers surged to present possibly their most impressive last defensive quarter of the year. As Anthony Griffin pointed out afterwards, those last twenty minutes are where Penrith often seem to slacken, but the last game of 2016 at Pepper Stadium seemed to finally provide them with the consistency that has been eluding them all season, with only a late surge of inspiration from David Nofoaluma preventing Josh Mansour crowning their dominance with the final try of the night.

Of course, the Tigers’ performance was in part a response to James Tedesco’s absence, as well as – more generally – to the demoralising and frustrating way in which his broken jaw has been handled by the NRL judiciary. It’s hard to play when your skipper has been injured and nobody has been accountable, and the Tigers very much felt like a team without a leader, not least because Friday night felt like the definitive failure of the Jordan Rankin experiment at fullback. While Rankin has been really effective at other moments this season – and was pretty good filling in for Teddy in the dying moments of last week’s match against Gold Coast – he was no match for the Panthers, and no match for Nathan Cleary’s towering bombs, and it felt as if the night turned on his struggle, with even his try 67th minute ruled a knock-on.

To be fair, Rankin was placed in a difficult position, forced into dummy-half in attack while Dene Halatau was off the field but also wearing the no. 1 jersey when it came to defence, in what may be one of the most challenging demands of a player, utility-wise, in any game this season. At the same time, don’t underestimate the damaging brilliance of Cleary’s boot, which was absolutely stunning on Friday night. Barely old enough for first-grade footy, he already has to be one of the deftest and highest kickers in the NRL, managing to lob the Steeden at just the right moment to allow it to float, apparently effortlessly, in mid-space, as the opposing team struggle and scramble to get themselves underneath it.

From the very beginning, then, it was clear that the young halfback was planning to target Rankin, with a brilliant floating bomb around the twenty-minute mark providing some of the best footage this season: a long shot of Pepper Stadium, shrouded in darkness, with the Steeden just seeming to hang forever, slow-motion, in mid-air. It’s at times like that you can really see why they call it a bomb, and reminded me of some of Mitchell Moses’ floating masterpieces during the rained-out game against the Chooks earlier this season, although Moses is nowhere near Cleary’s league, with last night’s game serving to remind Tigers fans just how desperately Moses needs to get in line when it comes to his own kicking game.

As might be expected, Rankin turned out to be utterly inadequate to Cleary’s boot, and I found myself wondering whether this will turn out to be a pivotal moment for the young halfback, just because it represents almost the first moment in his NRL career that he’s been faced with a fullback who’s sufficiently inexperienced to be really tormented by his kicks. In the last issue of Inside Sport, there was a great article about how we’re in an era of particularly promising fullbacks, as well as an era in which the transition from veteran to gun fullbacks is occurring fairly seamlessly, as in the case of Billy Slater and Cameron Munster at the Storm. It may be the case, then, that Cleary’s true abilities have been masked by a culture of fullbacks who are particularly strong under the high ball, and Friday night’s game was a devastating example of what he can do with a no. 1 who isn’t up to his game.

It wasn’t just Cleary, however, who used Rankin as an opportunity to perfect his skill with the boot, with a pitch-perfect kick from Cartwright at the 26th minute and a follow-up tackle forcing Rankin over the line for a goal-line dropout that proved to be particularly destructive for the Tiges. Watching the game, I found myself wondering whether Nofoaluma might be more effective in the no.1 jersey, since he’s been almost as reliable as Teddy under the high ball this season, and arguably even more visionary in attack. Sure enough, Nofo will be placed at fullback this week against the Warriors and it’ll be interesting to see how he fares as custodian of the team for these last couple of games before the end of the 2016 Tigers season.

In some ways, then, the pain of seeing the Tigers lose was mitigated by the brilliance of the opposing side. While it’s always difficult to be trounced by the Storm, or the Broncos, or the Roosters, there’s something about seeing another Western Sydney team thrive that’s heart-warming. Similarly, while he may have proved utterly destructive as far as Rankin was concerned, there was also something heart-warming and exhilarating about seeing Cleary’s brilliance really start to shine, and the game probably ranks as one of my favourites of 2016, even if we lost. Unlike last week’s game against the Titans, it felt like a honest loss, a loss you could walk away from without any hard feelings, and at this point in this season that’s about the most that any Tigers supporter can ask for.