After the last couple of weeks of Wests Tigers games, it was a breath of fresh air to watch tonight’s match between the Broncos and the Roosters. Here were two teams that were evenly matched – at least for the first half – and which – more importantly – played with utter conviction and dedication for the full eighty minutes. Moving from the one end to the other with lightning speed, it has to be one of the most entertaining games so far this season, with eight line breaks in the first half alone and a dramatic turnaround in favour of the Broncos over the second stanza that saw them snatch a stunning 32-8 victory. 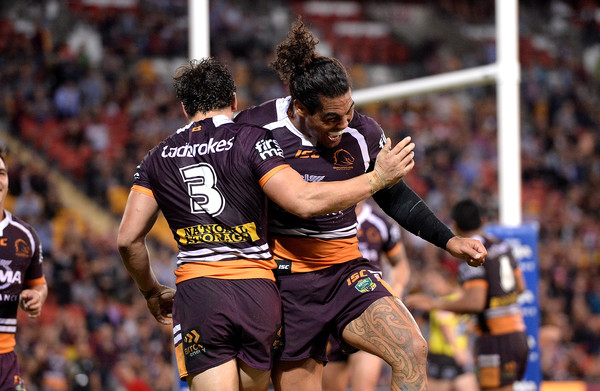 Of course, Brisbane had a lot to prove with this game. Over the last week, they’ve copped a fair amount of criticism for their attack, while two of their star players have had to wrestle with some unpleasant media attention. On the one hand, all eyes have been on Anthony Milford since Benji Marshall’s comments about his training acumen, while Jordan Kahu has been trying to live down one of the biggest bungles so far this season. To their credit, though, Milford and Kahu put in outstanding matches, definitively laying any concerns about their performance to rest and contributing in no small way to the Broncos victory. 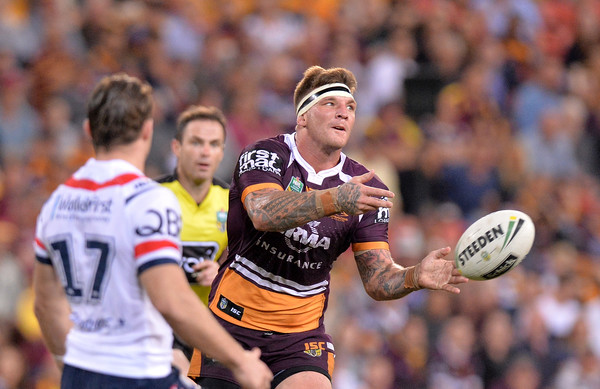 In a game so full of dramatic moments it’s hard to know where to start or which turning points were the most significant. Indeed, both stanzas were exciting for different reasons, making for a perfectly escalating footy narrative. Across the first half, Brisbane and Sydney were neck and neck, culminating in an extraordinary countdown to the halftime siren, in which the Broncos scooped up the ball on the last Roosters tackle and ran the length of the field, only for a great tackle from Mitchell Pearce to put an end to what would have been one of the greatest tries of the season. 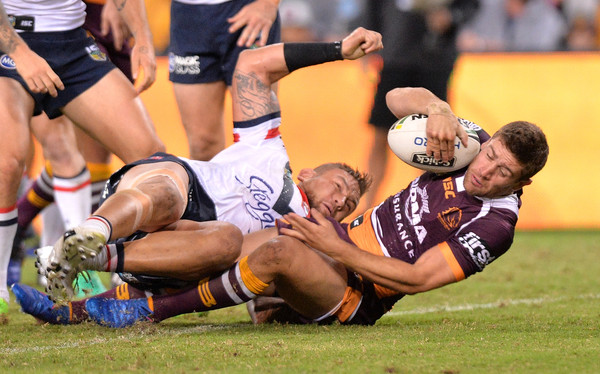 At the same time, the second half was exciting for a different reason, as Brisbane steadily built a lead and the Roosters found themselves unable to match their opening form. As the camera continually cut to Trent Robinson’s frustrated face, the Chooks barely managed to reach the inside of their own twenty as set after set of Broncos attackers converged on the Brisbane line. At times, it felt as if we were watching the same plays over and over again, creating a sense of stalemate that was strangely exciting as it became clearer and clearer that Sydney City had to do something spectacular to regain their earlier momentum. 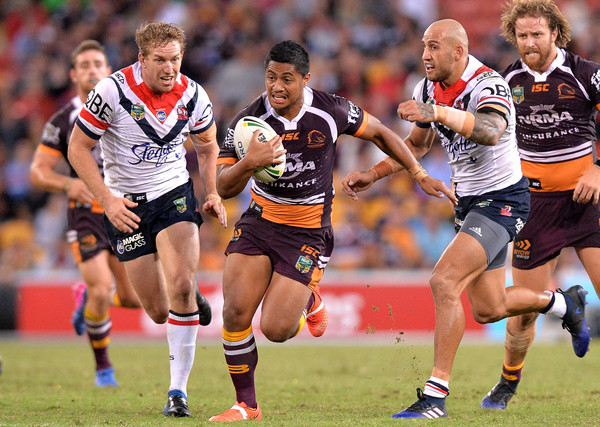 Part of the drama came down to the continuous struggle between Blake Ferguson and Tautau Moga, who formed the key match-up of the night in terms of entertainment value. After Fergo managed to brush past Moga for the second Sydney try at the 22nd minute, the burly centre seemed determined to have the last word, targeted the Brisbane push to tackle the Roosters’ left wing. Given that Shaun Kenny-Dowall was having a pretty off night, it was good move, and by the end of the evening Moga probably managed to make his point.

As any Roosters fan will tell you, the rapport between Fergo and SKD is a drama in itself, and contributes in no small way to the peculiar suspense of the team. While Ferguson’s performance for the Four Nations signaled a new era of consistency and maturity for the wayward centre, SKD can run hot or cold without any apparent trigger. Sometimes he’s hot, sometimes he’s not, and tonight he was definitely not. Given that Kahu was effectively playing as a second fullback, often outdoing even Darius Boyd under the high ball, it was embarrassing to see SKD bring in mistake after mistake, from a clumsy pass that nearly let in an easy Broncos try to his failure to retain the high ball and so pave the way for James Roberts’ try towards the end of the second half.

While the pace and momentum was ceaseless, two more moments epitomised the drama of the night as a whole. Most agonisingly for Brisbane fans, Ben Hunt almost brought in the third try for the Broncos, only for the referee to incorrectly disallow it on the basis of a supposed forward pass from Anthony Milford. When Bunker footage definitively depicted Hunt as onside, it felt as if fate had temporarily turned against the unlucky halfback once again. Sure enough, he was taken from the field with a hamstring injury during the following Roosters set. It felt lucky, then, that Brisbane didn’t seem to be a in a position to fully digest the Bunker footage, since it would have surely sapped their moment at this point in the night. 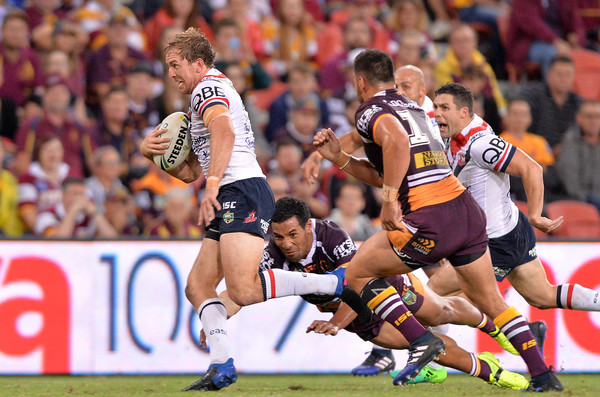 It felt only right, then, that Andrew McCullough brought in the single best Broncos moment of the entire evening shortly after Hunt departed the field. McCullough had already proven his attacking mettle with the first Brisbane try at the fifth minute, but a well-placed ankle tap brought down a Michael Gordon burst a mere ten metres from the line. As Gordon coughed up the Steeden it was intercepted by Brisbane who began yet another plummeting movement towards their own line, in one of the vertiginous changes in direction that characterised the game as a whole.

For all that these moments defined the game, it was a match of small moments as well. In fact, so quickly did the ball change hands that it was sometimes hard to pinpoint just how the energy and excitement had changed. As mentioned, Roberts was brilliant, bringing down the fourth Broncos try after Josh McGuire brought SKD to the ground under the high ball. Yet it was Milford who really set up the four-pointer, inserting himself as first receiver the moment SKD started to hit the deck. Time and again, Milf demonstrated his impeccable sense of timing, playing a role in virtually every point even if he didn’t bring home a single try himself. 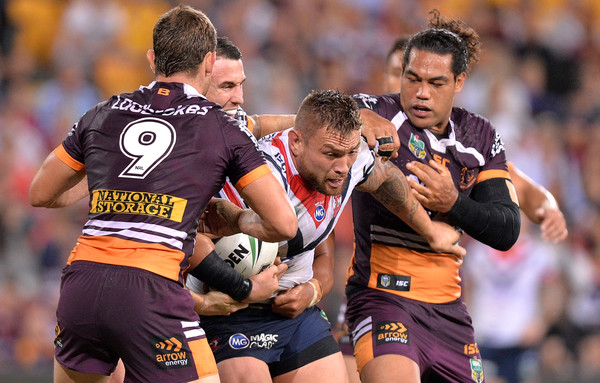 The big Brisbane men had a good night of it as well, with two tries brought in off the interchange. Sam Thaiday scored his second four-pointer in as many weeks, while Korbin Sims put in a classic twist-and-touch at the fifty minutes, spinning out of a mass of Roosters defenders to plant the Steeden over the line. And let’s not forget David Mead, who saved Brisbane from a goal-line drop-out right on the line at the eleventh minute, as well as putting down his first try in Brisbane colours four minutes before the end of the game. As the prime collateral damage of Jarryd Hayne’s move to the Titans, I’ve been hoping to see Mead really thrive at Brisbane, and tonight was evidence of him regaining the form he was showing in Gold Coast colours. 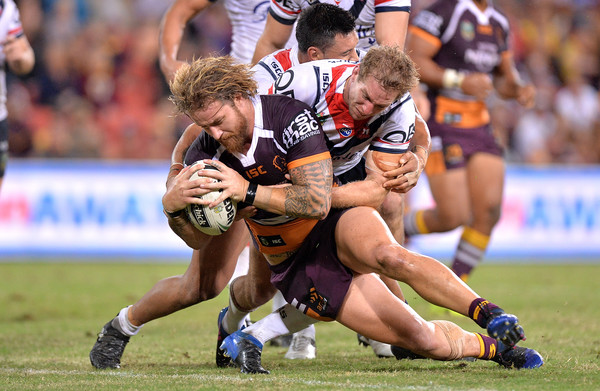 On the Roosters side, the most promising part of the evening was the growing rapport between Mitchell Pearce and Luke Keary in the halves. Keary, in particular, is a wonder, especially in defence. At the hour mark, he managed to get between Roberts and Milford, outspeeding Jimmy the Jet to ground and hold onto Milf’s grubber, saving what initially looked like a certain Brisbane try. At the same time, it was the pass from Pearce to Keary that set Ferguson up for his four-pointer, testament to the intensive passing game that sets these two apart from most other halves pairs in the competition. I always wrote Keary off as a bit of a second-rate partner to Reynolds, but if his form at the Chooks suggests anything, it’s that he really wasn’t syncing at the Bunnies and genuinely needed a change of scene to achieve his potential.

And that brings me back to James Tedesco. At first, the rumours about Teddy joining the Roosters made me a bit hesitant to watch tonight’s game. With Moses apparently moving to Parramatta, the thought of Tedesco in Sydney City colours just feels to raw. However, watching the conviction of the team in defeat was so different from watching the disarray of the Tigers in defeat that I found myself wondering whether the NRL really owes it to their best fullback to find him a proper new home, especially since the move seems to have been so beneficial for Keary. Certainly, Michael Gordon isn’t thriving at fullback, despite a few good plays earlier in the season, and could easily be shifted to another position. Only time will tell, I suppose, but for now couldn’t the Tigers have a shot at losing as gracefully and grittily as the Chooks did last night?

[Note: a version of this piece was also published at The Roar]