I don’t really know what I was expecting from this week’s clash between the Cowboys and the Tigers at 1300SMILES Stadium, but I certainly wasn’t expecting something this dramatic – or this emotional. On the face of it, that might sound like a strange thing to say, since this week – and year – has been nothing but drama and emotion for the Tigers. As if the deregistration of Tim Simon and termination of Jason Taylor’s tenure as coach weren’t enough, the last seven days has seen a whirlwind of emotions as Luke Brooks has resigned and Mitchell Moses has announced his decision to sign with Parramatta in 2018. 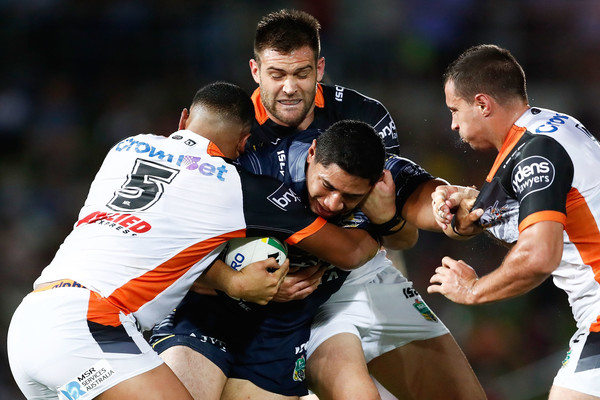 But that’s not all. At the same time, Ivan Cleary has been announced as Tigers coach, while Mitchell Moses compounded the drama of his imminent departure by requesting an immediate release, with some pundits initially suggesting that he might have been playing for the Eels as early as next week, in their game against the Tigers at ANZ Stadium. Add to that the growing speculations around James Tedesco heading to the Roosters and Aaron Woods heading to the Bulldogs – as well as Teddy and Woods’ growing openness around their dissatisfaction with management – and it’s been a roller coaster ride for Wests Tigers fans.

For all those reasons, however, I’ve had to disinvest myself a little bit. Going into this match, I assumed that the Cowboys would win and that, if they didn’t win, it would be due to the combined absence of Matt Scott, Antonio Winterstein, Jake Granville and Lachlan Coote, rather than to any resurgence on the part of the Tigers. Even if the Tigers had a dominant opening, I figured that the disastrous second stanza against the Storm a couple of weeks back should check my enthusiasm. And even if the Tigers came away with the win, I told myself, there was no guarantee that it meant anything, just because Tedesco and Woods could announce their departure any day now.

In fact, the Tigers did start off on a very strong note, scoring two more tries twenty minutes into the match than they had across the entire duration of their last visit to Townsville in 2014. Not unlike the opening of the Sea Eagles-Dragon clash earlier in the day, an unusual – if less contentious – opening try seemed to provide the Dragons with momentum, not least because it was brought home by Ava Seumanufagai, who also introduced the Tigers’ terrific first game of the season with his first four points for the club as well.

From then on, the tries flowed fast and free, with Elijah Taylor, David Nofoaluma and Matt McIlwrick following in Seumanufagai’s wake at the ninth, sixteenth and thirty-third minutes respectively. Each of the try showcased the Tigers at their best, with Moses helping out Taylor with an elegant cutout pass by way of Nofoaluma (who else), Nofoaluma in turn taking advantage of a mad burst from Tedesco up the middle of the park, and McIlwrick relying on nobody but himself as he stepped over the line for the softest try of the night after realising that the North Queensland defense hadn’t regathered in the wake of a massive tackle on Aaron Woods. 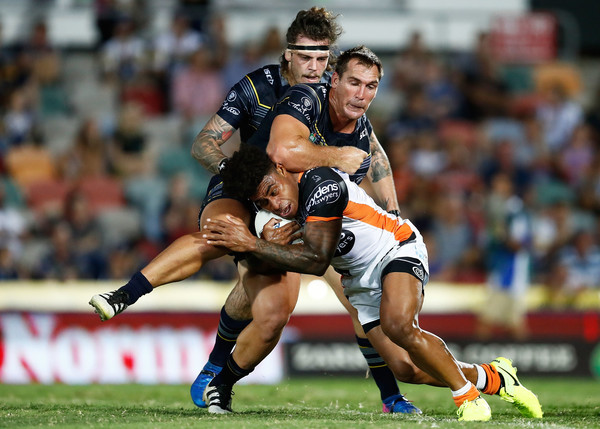 Still, it was hard to get too excited, especially since the Tigers didn’t manage to score again until the end of the game. With that kind of sudden drought, the match against the Storm inevitably came to the forefront of my mind, even if the team proved peculiarly adept at targeting and containing Thurston, most notably in a brilliant tackle from Michael Chee Kam that forced JT to cough up the ball ten minutes into the second stanza. With the Cowboys missing many of their key players and the Cleary era just beginning the game seemed to have a strange anomalous quality, a sense that the conclusion didn’t mean as much as it normally would, or that – despite the events of the previous week – there wasn’t as much at stake as normal.

Yet, as so often occurs in footy games, things took a sudden turn twenty minutes from the end. As the Cowboys were gifted a series of repeat sets on the Tigers line, the black and gold were roused into their single most passionate defensive effort all season. The more frantic North Queensland became, the deeper Wests dug, as if exorcising all their recent demons over the course of these subsequent sets. Across the evening, every North Queensland try was put down by a barging forward – one from Taumalolo and two from Coen Hess – and the Tigers knew it, bringing everything they had to a Cowboys outfit determined to simply barge through their defensive line. 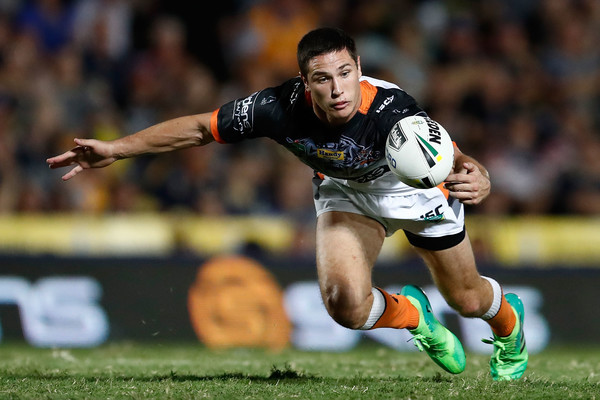 As the heat and humidity set in, each team became sloppier and messier – but it was the kind of sloppiness you see when both teams are throwing everything at the wall and seeing what sticks. In an extraordinary sequence around the seventy-minute mark the Steeden changed hands four or five times, with each side coughing it up and Chee Kam fumbling what would have been a certain try at the sixty-eighth minute. Neither side completed a set for about five minutes (or maybe it was longer) until Coen Hess brought in the third try for North Queensland seven minutes out of the full time siren.

It was the kind of situation where the Cowboys nearly always win – and where you’d expect them to win in this case. That they didn’t was partly due to the dexterity and vision of Jacob Liddle, who managed a try two minutes out of full time, but also because Thurston was suddenly debilitated by what appeared to be a calf injury so bad that he was unable to put any weight on his leg and had to be escorted it off the field as play continued around him.

It was one of the most dramatic moments of the year so far – JT walking off in the foreground, Moses lining up the conversion in the background – and yet nobody would have argued that Thurston’s absence was what guaranteed the Tigers the victory. If anything, Wests had shown themselves adept at targeting and containing the game’s greatest halfback all night, even if he still managed to rack up his 2000th point for North Queensland in the process.

All of a sudden, the Tigers had won it and, as a fan, I was taken aback by how emotional the impact of the victory was. It didn’t matter what might happen next week, or next year, the win was enough for now. No image will stick in my mind this season like that of Tedesco clutching his chest in relief – it was a beautiful glimpse of the vulnerability every footy player faces when they run out on the field, and found its natural counterpart in Moses’ post-match interview, in which he could barely speak for the emotion he was feeling.

Of course, the next step is to analyse how and why the victory occurred, since it can’t simply – or simplistically – be attributed to a depleted North Queensland side. Was it a matter of disorganisation on the part of the Cowboys, as Jason Taylor suggested in his quite provocative guest appearance in the studio afterwards? Or is Cleary’s vision already starting to take effect? Certainly, the repeated footage of Cleary sitting calmly and impassively in the referee’s booth seemed to suggest a new era of vision for the team. Only time will tell though – for now, it’s enough to savour one of the most dramatic and emotional spectacles of footy that this season has offered so far.