Manly are back with a bang after a lacklustre two weeks following a dramatic struggle with the Raiders on Friday night and the second golden point loss for Canberra in the 2017 season. From the outset, the Sea Eagles were barely recognisable as the team that rolled over and died for the Dragons and the Storm in Rounds 6 and 7, dominating field position and attack strategy over the first couple of sets. They say that sometimes a team needs to play an away game at a formidable venue to really rediscover their mojo, and Manly certainly seemed to be galvanised by being on the road, having to reach deep instead of coasting on the atmosphere of Fortress Brookvale to bring them through.

That’s not to say that the Raiders weren’t determined to win at home either, but that Manly hung on with more grit than I would have expected, demonstrating a renewed defensive panache that was particularly impressive across a succession of earlyish Canberra sets that included an almost-try from Junior Paulo and an almost-punchup between Dylan Walker and Aidan Sezer. It was to be the beginning of the most volatile game of 2017 so far as sledging and saltiness was concerned, with most of the key tackles on the verge of spilling out into a fight and Walker getting amongst it with Josh Hodgson after some dirty talk on one of his final conversion efforts.

Apart from being entertaining to watch, these kind of high-octane matches are often determined by momentum, and across the second stanza – and the last twenty minutes in particular – the momentum shifted and heaved like a tidal wave. It wasn’t initially the case, however, since Manly’s failure to make good on their last tackle options meant that their increased conviction in attack never quite allowed them to settle into a groove until Jake Trbojevic brought in the first try some fifteen minutes into the second half.

Appropriately, it was a four-pointed that occurred despite Manly’s struggle with fifth tackle play, as a fairly standard grubber from Daly Cherry-Evans ricocheted off Iosia Soliola and Jake Turbo managed to make the most of it. Three minutes later, Dylan Walker managed to slam through the Canberra defence and put down a second four-pointer without the need for sustained fifth-tackle strategy, which provided Manly with the momentum they needed to compensate for being kept tryless in the first half. Shortly after, four Sea Eagles defenders dragged Jake Cotric over the sidelines and it felt as if the boys from Brookvale were well and truly back in the game.

From then on, Walker, along with Marty Taupau, personified the Manly drive to retain momentum. A couple of weeks ago Walker showed what he could do when he gets on a runner’s high, and while he may not have put quite as many points on the board on Friday night, his contribution was just as sustained over these final minutes, culminating with the penalty goal that won the Sea Eagles the game – a game bookended by Dylan Walker penalty goals. Taupau, too, demonstrated his best self, dexterous in setting up second phase play but also having a say in as many tackles as possible, even if that meant running from across the field to try and land a punch during Walker and Sezer’s early altercation. 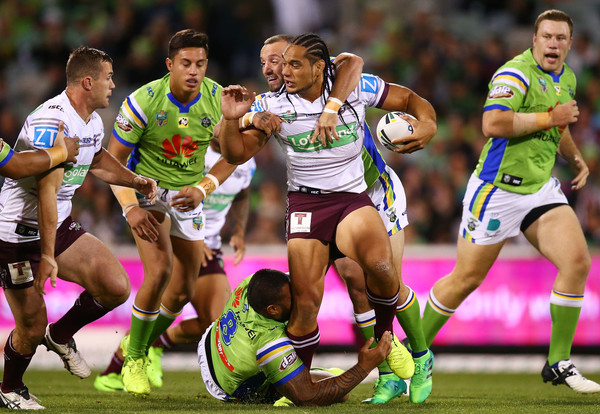 None of this is to say, however, that Canberra didn’t put in an amazing performance, since this was one of their best highlights reel of the season so far. Half an hour in Jarrod Croker brought in the first try off a nicely placed kick from Aidan Sezer that showed up Manly’s poor fifth-tackle options, especially since DCE had been caught before he could grubber on the previous set. Six minutes into the second half Josh Papalii put down the second four-pointer, running from the ten metre line to the try line through three Sea Eagles defenders to notch up the toughest try of the night.

And let’s not forget Paulo’s almost-try at the twelfth minute either. Initially, the ref called this a try but the bunker reversed it on the grounds that the Steeden hadn’t hit the turf. From what I understand, however, it’s enough for the ball to skim the ground. Similarly, from what I understand, the bunker can only reverse a ref’s decision if there’s sufficient evidence to the contrary. As far as I could tell, it wasn’t at all clear that the ball hadn’t skimmed the top of the grass – it was certainly the softest try I had ever seen – so this made me wonder whether we’re entering a more assertive and emphatic era for the bunker, something that seemed to play out a bit in the Bunnies-Broncos clash shortly after. 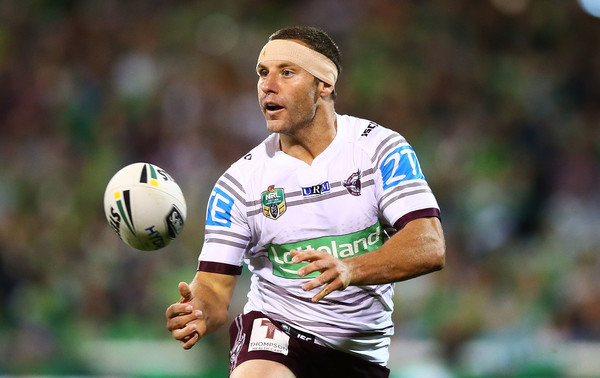 If anything, though, the Paulo miss just seemed to make the Raiders hungrier to continue their winning streak, and by the time that Jarrod Croker levelled the score with a 14-14 penalty goal they were hungry indeed. Several minutes after Croker’s penalty goal, Walker got a chance to take the two and missed, leading to a golden point matchup in which an error from Joseph Tapine – one of several that he committed throughout the night – would finally gift Walker the opportunity to make good on his botched two-pointer and bookend the game with penalty kicks. 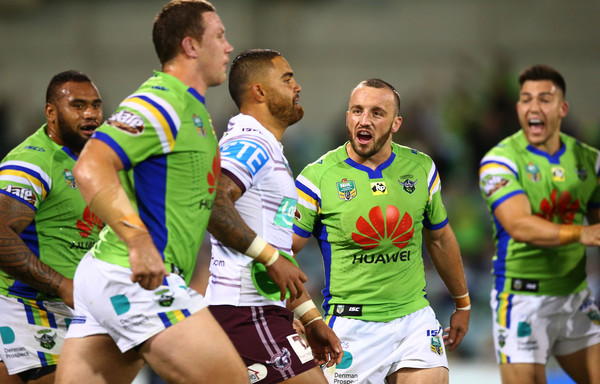 As exciting – and exhausting – as golden point was to watch, however, the suspenseful climax of the game came just before the two teams broke even at 14-all. Up until this point, Manly had done a pretty good job of neutralising Joey Leilua and Jordan Rapana, which is perhaps why it felt as if Rapana, in particular, would have to deliver something emphatic to turn the tide in Canberra’s favour again. And, boy, did he deliver. In a season that’s been defined by acrobatic Rapana tries and try assists, this was his best so far, a dazzling spin in the air that saw him land the Steeden in the right corner of the field milliseconds before he and it were spiralled into touch. 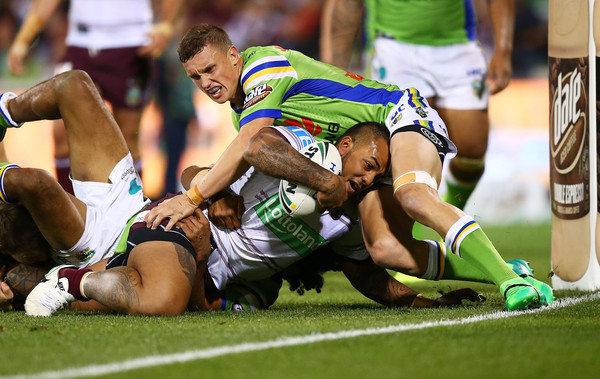 In some ways, the defining image of that try wasn’t the actual footage of Rapana but the subsequent image of the ball calmly sitting in the top right corner of the field. It looked as if it had been carefully placed there for a photo opportunity rather than slammed down in the midst of the most kinetic moment in the most volatile match of the year so far. That combination of intense focus and visceral momentum is Rapana’s hallmark, and in my opinion he managed the best try of the NRL year so far for pure talent, spectacle and elegance.

And yet. And yet. For all that this seemed to signal the absolute resurgence of Canberra, Tom Turbo still managed to get his try across, which was ultimately why I felt that Manly really deserved to win. To hang on in such a gritty way despite such an incredible display of dexterity and professionalism from Canberra – that was the achievement Manly needed to overcome their Lottoland slump of the last few weeks. Once again, they’re playing as they did in Rounds 3-5, if not better, and they will need to do everything in their power to build upon this when they take on the Bunnies next weekend at ANZ.