As far as the emotional stakes went, Friday night’s match between Brisbane and Penrith at Suncorp Stadium was one of the strangest of the year. From the outset this was going to be a critical game for the Panthers, after three crushing consecutive losses that seemed to have progressively erased their hopes of regaining their 2016 form. And, for most of the game, it seemed as if things were just going to get worse, with the Broncos managing to hold the visitors tryless until the last fifteen minutes, when Trent Merrin, Matt Moylan and Reagan Campbell-Gillard scored three four-pointers in the space of ten minutes.

Still, to call this a comeback wouldn’t be quite accurate either. Among other things, comebacks tend to erase or cancel the feeling of how the team were performing earlier in the evening. In my mind, at least, the overall mood of the game was one of desperation and despair on Penrith’s part, as the Broncos put down try after try after try. Up until Merrin breakout try, then, it felt as if there was something utterly conclusive about this loss that even the late surge never quite removed. From the beginning of the second half, it was clear that the Panthers had no real chance of winning, and certainly no chance of recapturing their comeback against Brisbane in Round 3 2016.

Last week the Panthers’ body language and facial expression were particularly haggard and that was just intensified this week, with the look from Waqa Blake’ seeming to say it all after he copped what some considered to be a pretty unlucky penalty eight minutes into the second half. While we often see frustration, excitement and adrenalin on the footy field, we rarely see this kind of incredulous, naked despair, and I reckon that even Broncos fans must have been relieved when Penrith finally got some points on the board, just because of how depressing their performance was against such a dominant and superior side.

For a while there, it looked as if the lone Penrith consolation was going to be James Tamou’s almost-try in the opening minutes, the first of a series of calls from the referee that made it clear it was not going to be the Panthers’ night. That’s not to say, however, that they didn’t have the opportunity to grasp control of the game, but that that turning-points seemed to emerge and then fade away like a mirage, leaving the mountain men even more desperate than before.

One of these moments came twenty-four minutes in, when Brisbane failed to make good on three repeat sets and Josh McGuire coughed up the ball early on the fourth, giving the Panthers an unexpected opportunity for some field position. Yet McGuire made good on his mistake, forcing his third Penrith error for the night on the following set. Again, the Panthers seemed to find a new momentum and spontaneity two minutes from the end, and were about to cross the line when Moylan was called out for the slightest of forward passes (if it was forward at all) to Dallin Watene-Zelezniak.

Meanwhile, the Broncos didn’t seem to be playing a regular match so much as demonstrating all the ways they could set up tries against a dummy team. Ten minutes in, James Roberts broke through the Penrith line and passed to Jordan Kahu, who passed to Kodi Nikorima for the first four-pointer of the night, an opening that was all the more disappointing for Penrith in that it came off the back of a dropped ball from Corey Harawira-Naera just as they were starting to glimpse some field position. Minutes later Roberts and Nikorima paired up again around a Penrith error, with the halfback intercepting the ball after Yeo coughed it up and then passing it to Jimmy the Jet who ran with it all the way from the Panthers’ twenty to put it over the line, eluding virtually every tackle along the way, with only DWZ managing to even come close to his blistering speed.

For the rest of the first stanza Penrith seemed to give up, with Kahu catching the high ball off Milford’s kick half an hour in to plant his own four-pointer. While Nathan Cleary and Peta Hiku had a half-hearted stab at it, there was no real competition from Penrith, and no try spoke more to the Panthers’ lack of belief and spirit over the first part of the game, especially since it wasn’t even such a great kick from Milford in the first place. With Kahu converting his own four-pointer seamlessly seconds later, it felt as if the Panthers had no prospect and no possibility of putting down points, let alone winning the game.

Sure enough, two minutes later Tautau Moga brought home another try, with Milford managing a deft offload to Alex Glenn who made big metres and passed to Darius Boyd, who made even bigger metres before handing over to Moga to finish off. Along with Roberts’ involvement earlier in the night, it cemented the game as a showcase for high-speed Brisbane tries. Ten minutes into the second half, Korbin Sims put down yet another one off the back of Blake’s agonising penalty, tackling and twisting over the line with shades of his performance against the Rabbitohs last week.

Fifteen minutes later, however, something started to shift, with Merrin managing the first Penrith try – another twist-and-spin at the end of a series of repeat sets that seemed to suddenly build momentum among the mountain men for two key reasons. Firstly, it bore such a strong resemblance to Korbin’s try – the last from Brisbane – that it felt as the Panthers had started to channel some of the Broncos’ energy and take control of the narrative. Secondly, it came just after the Panthers chose to attack the line instead of take the two, more than justifying their push for one final gritty effort.

Three minutes later Moylan brought home another try, creating an amazing Penrith surge that culminated in their third, last and best four-pointer of the night. After a fantastic run from DWZ that broke through three tackles, the Panthers moved the ball through Blake, Cleary and Moylan, with Campbell-Gillard finally planting it over the line. It was a genuine team try that strongly recalled Peter Wallace’s magnificent four-pointer against the Bulldogs last year – the best possible way to regain some momentum and pride in the dying minutes of the game.

At the same time, however, I don’t want to hype this up as a comeback. For one thing, Brisbane were undoubtedly the dominant team – both in terms of strength and strategy, as Matt Gillett made clear when he put down the last try of the night in the final seconds after a quick pass from Milford out of the ruck, a great little coda that stamped the game as Brisbane’s triumph. For another thing, it didn’t feel as if Penrith’s immediate and visceral goal was to win so much as to put points on the board and to regain the dignity and pride they need to have a shot at winning against the Warriors after Representative Round. 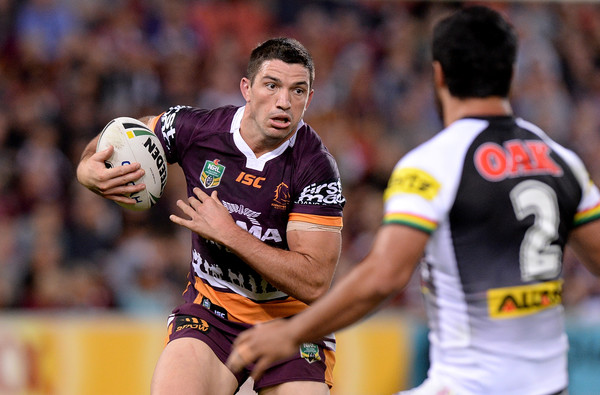 In other words, Friday’s match was one of those genuinely inconclusive games that crop up from time to time. Are Brisbane a force to be reckoned with? No doubt. But are the Panthers still finals contenders? That’s harder to say. All that can be really said is that they didn’t definitively or conclusively rule themselves out of being finals contenders, as it appeared they might do over the first half. For Penrith fans, that has to be consolation enough for the moment, as they prepare for what will surely be a make-or-break match in Auckland.