As the Fox commentators pointed out during Saturday’s first Pacific Test, the Cook Islands have produced the greatest number of top-tier rugby players of any country in the world when measured per capita. With a population of 21 000 – as opposed to Papua New Guinea’s 7.6 million – it’s a country in which almost every facet of life is touched by rugby league in some way. Given that rugby league is also the national sport in PNG, then, the stage was set for a powerful battle at Campbelltown on Saturday afternoon, not least because David Mead and Nene McDonald were out for the Kumuls as well. 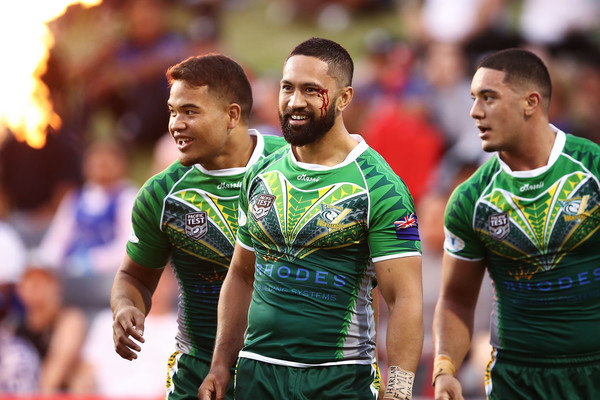 At first, the Cook Islands didn’t quite demonstrate the same discipline as the Kumuls, with Jono Ford almost bringing home the first try of the afternoon after beating PNG under the high ball, only to cough it up while grounded. As the first stanza proceeded, however, the Cooks proved themselves outstanding at forcing goal line drop out after goal line drop out – thanks in large part to the astute kicking game of Isaac John – although Papua New Guinea turned out to be just as good at defending them.

By the first siren, the Kumuls had twice as many points on the board but the Cook Islands had forced them to make twice as many tackles, while the Cooks had managed to grasp two thirds of possession but PNG had proven more efficient at converting field position into actual tries. Watching the incredible defensive effort from the Kumuls, I was reminded of how well suited the Pacific physiognomy is to the gruelling demands of rugby league, with both sides evincing much more dragging, lifting and pack defence than you’d see in a regular NRL game.

On the PNG side, Thompson Teteh brought home the first try fourteen minutes in off the back of a deft pass from Justan Olam, while Wartovo Puara followed up several minutes later. In the second half, Stargroth Amean managed a double, running through several Cook Island defenders five minutes into half time after a brilliant run and try assist from Wellington Albert, and then crossing over again ten minutes later shortly after a terrific tryscoring tackle on Charnze Nicoll-Klokstad. With Nixon Putt putting down another four points minutes later, the Kumuls finally felt like they were destined to win it. 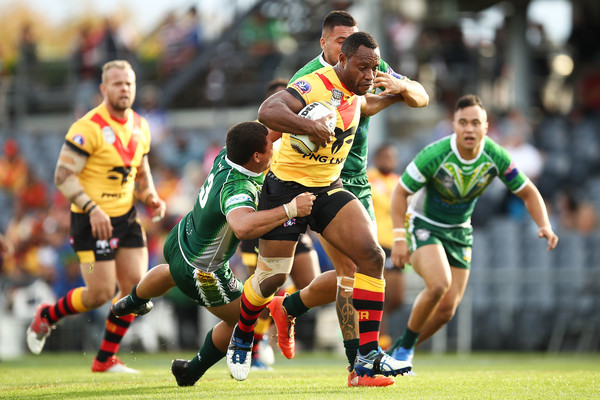 On the other side of the Steeden, the Cook Islands had a bit of an inconsistent second half, managing to put down most of their points but also finding it more difficult to complete sets and maintain a consistent momentum. Across the first half, they’d only managed one try, with Geoff Daniela grounding the Steeden after a terrific run and line break from Nicoll-Klokstad. Along with his debut for the Warriors last week, it has been a great fortnight for the up-and-coming winger, and his presence gave the Cook Islands a real urgency and propulsive drive.

It felt promising, then, when Daniela also put down the first Cook Islands try in the second stanza, not least because it involved one of the team’s best set pieces all afternoon. Following on from a deft Isaac John bomb, Daniela chipped the Steeden forward towards the goal line, where Olam fumbled it just enough for the Cooks’ wily winger to plunge forward and ground it. Given that Uti Baker had also scored just before halftime off the back of a terrific short pass from Kobe Tararo, it felt as if the Cook Islands might really have a chance at building the momentum they needed to fight back against the escalating PNG drive.

As it turned out, however, the Cooks would only make one more four-pointer, with Esan Marsters managing to put down points two minutes before the end. It was a great late gesture for the Cook Islanders, a last bit of fight that reminded the crowd just how hard-won the Kumuls victory really was, as well as one of the best possible way for Marsters to recommend himself to Ivan Cleary as he starts to rearrange and reconceptualise the Tigers’ forward pack in the buildup to Aaron Woods’ and Ava Seumanufagai’s departures for the Bulldogs and Sharks respectively. 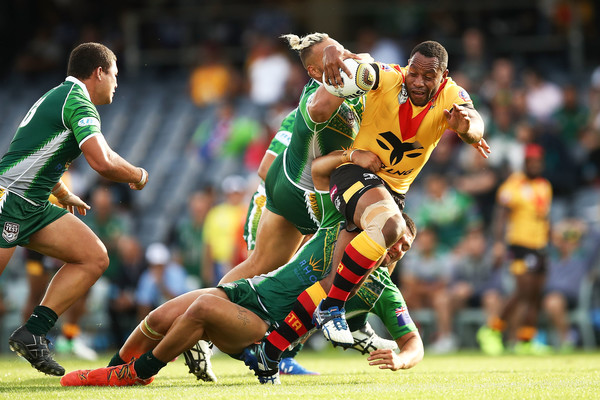 In that sense, the scoreline didn’t quite reflect the effort and talent displayed by the Cook Islanders – especially John, who was indefatigable in his kicking game, organisation and leadership, and who played a role in pretty much every try for the Cooks, most spectacularly in the banana kick that established the repeat set needed for Baker to score four minutes before the end. On the PNG side, Ase Boas was equally outstanding, ticking off every conversion and bringing home a penalty goal from fifty metres out on the final siren, in the perfect conclusion to such a focused and clinical afternoon with the boot.

All in all, then, it was the perfect start to the Pacific component of Representative Round, as well as a reminder of all the talent in rugby league that we don’t always see on the main stage. At the same time, it was a great introduction to some of the most promising current young guns – Nikoll-Klokstad is definitely one to watch – as well as a good showcase for players like Esan Marsters and Rhyse Martin who haven’t quite made the spotlight at their respective clubs. And, of course, a great testament to football community more generally, which is really what Representative Round is all about.