It’s almost unbelievable to contemplate what a dire state the Sea Eagles were in a couple of weeks ago, since they’ve managed possibly the greatest turnaround of the season so far, culminating in a 44-8 smashdown against the Rabbitohs at ANZ Stadium on Friday night. It’s been interesting, too, that Manly’s resurgence has occurred at away games  – perhaps it says something about taking Brookvale for granted, or taking the Fortress mentality cemented by the late great Sea Eagles generation for granted. 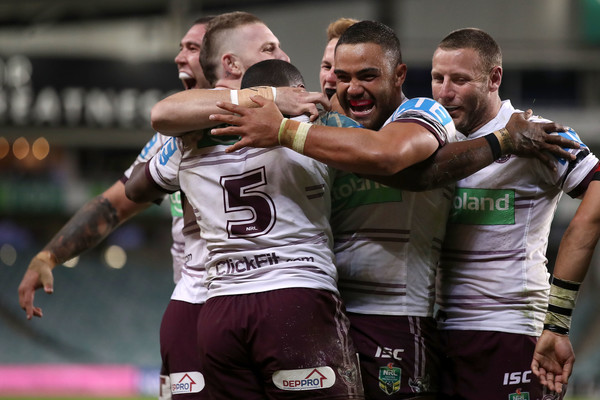 Whatever the reason, though, there can be no doubt that Manly put in one of their best performances of the year against the Bunnies, who are now faced with a terrible loss to contemplate over the next two weeks before taking on the Tigers at ANZ once again. As chance would have it, Souths put the first two points on the board – but it was a cautious two, with the team deciding to take a penalty goal instead of opting for a repeat set. In retrospect, it was probably a wise decision, given the way the scoreline turned out, but it didn’t exactly suggest a Bunnies outfit brimming with confidence either. 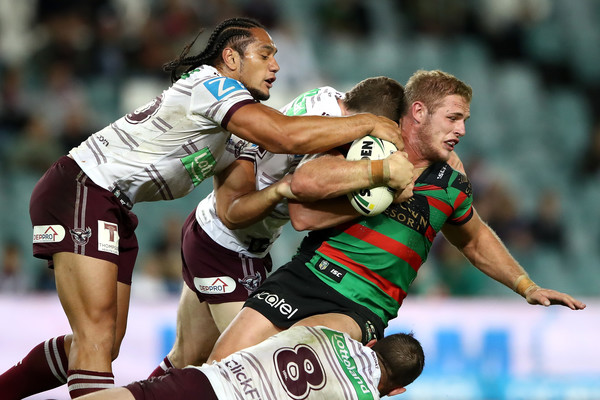 That’s not to say, of course, that there weren’t potential turning points, with the cardinal and myrtle managing to defend three very aggressive sets from the Sea Eagles and to contain some pretty dangerous offloads from Marty Taupau halfway through the first stanza. Throughout eight solid minutes of Manly attack the Bunnies managed to hold the score at 6-2, and for a moment there it looked as if we might be in for a fairly tight game. 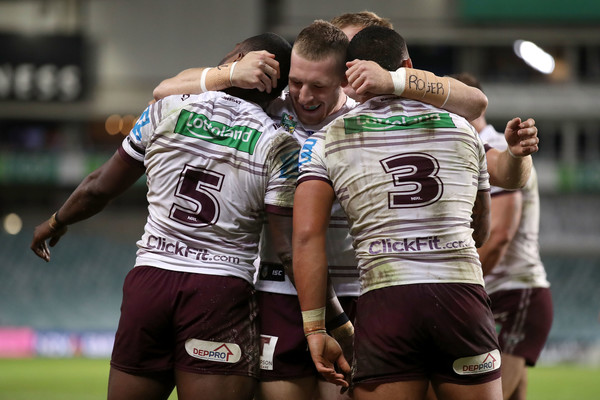 Things started to come apart after that, however, and not just because of the steady accumulation of Manly tries. At the beginning of the second half, and faced with a scoreline of 30-2, Robert Jennings made it across the Manly line at what could have been a critical tipping-point only to fumble the ball in the process. Five minutes later Robbie Farah managed a one-on-one strip of Apisai Koroisau only for Brian Kelly to intercept Adam Reynolds’ subsequent pass. 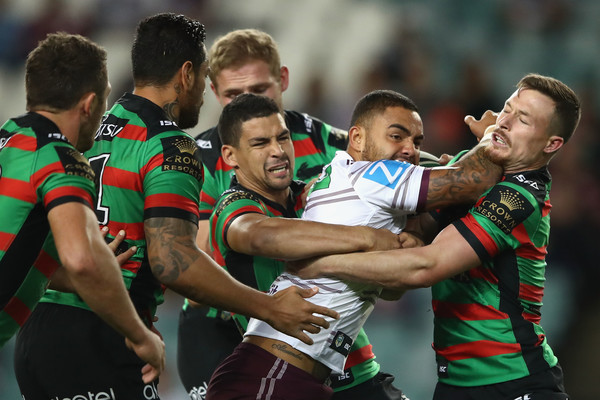 As the Souths sets mounted, the Bunnies got penalty after penalty but still couldn’t manage a try – with Jake Trbojevic slamming into Sam Burgess for a terrific trysaving tackle – until Hymel Hunt got over the line for a four-pointer that, in a weird kind of way, just seemed to reiterate the strength of the Manly defence across the game rather than signalling any kind of real resurgence for the Rabbitohs. 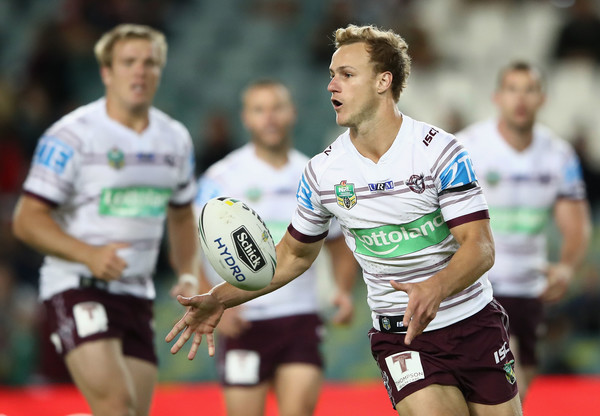 Still, there was to be one more point in the second stanza at which it felt like Souths might manage a comeback. As the Rabbitohs were gifted their sixth penalty, the possibility of a seventh penalty and ten minutes in the bin for a key Sea Eagles player suddenly made it feel as if the Bunnies might have a chance, and that we might be in for a level of suspense that you wouldn’t expect from some such a hefty win margin. Still, the fact the Burgess knocked on during the next play – and that Manly got their own first penalty on the subsequent set – seemed to put the Sea Eagles back in the spotlight, especially since it culminated with Uate’s third try as well. 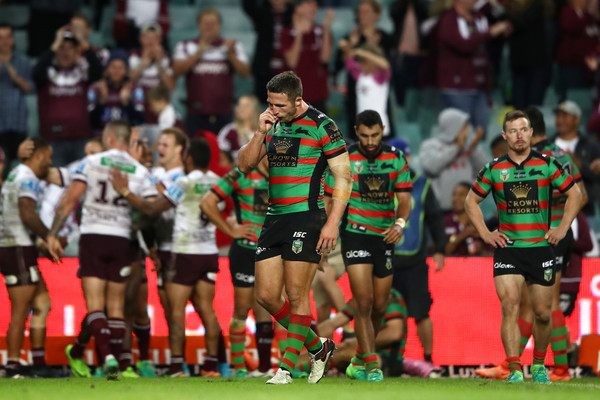 As many turning-points as there might have been, then, it was hard to deny the fact that the game played out in large part as a sequence of fairly dominant Sea Eagles tries. Yet for the most part the Manly four-pointers weren’t especially spectacular or gymnastic – at least not compared to some of the stuff we’ve seen this season – but just economical, efficient, professional tries that showed up the gaping holes in the Bunnies’ defence. Ten minutes into the game Brenton Lawrence managed the first on the back of Daly Cherry-Evans’ second 40/20 kick of the season – a try that should have been stopped by the Rabbitohs if they’d had their defensive organisation together. 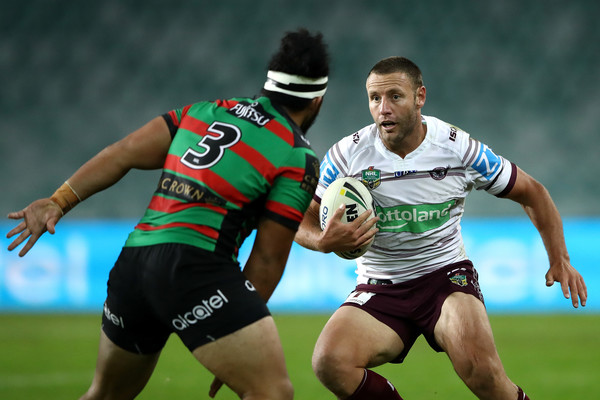 Ten minutes later, Curtis Sironen brought home the second – and the first of many in which Dylan Walker would play a critical role. Managing to edge Bryson Goodwin away from the Steeden without quite obstructing him, Walker managed to make space for Sironen with real dexterity. Last year his Origin call up felt a bit random, and probably created a bit of a backlash, but he’s really earned it this year, and has probably surprised even his most virulent detractors with his performance over the last couple of weeks. 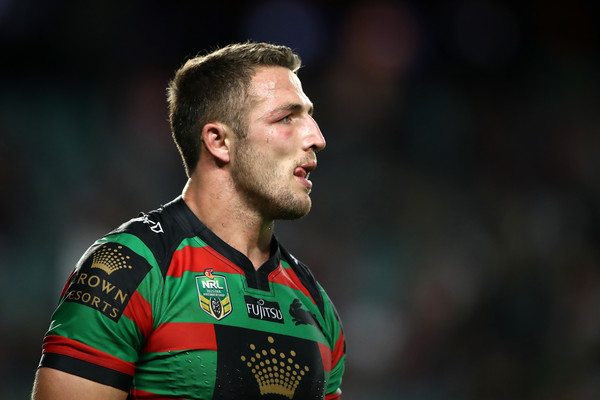 Only four minutes later, the ever-faithful Jorge Taufua landed his own four-pointer after Reynolds kicked the ball dead and provided the Sea Eagles with a seven tackle set – part of a fairly spotty night with the boot from the Bunnies halfback. Minutes later, Uate went over after Tom Trbojevic outdid Alex Johnston under a DCE bomb and then passed to Koroisau, who fed it on to Walker who engineered a brilliant short pass – almost a flick pass – to Uate. 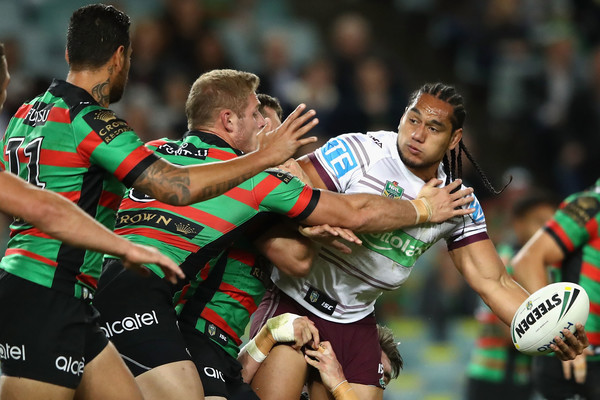 It was to be the first of four tries from Uate, each of which were facilitated by Walker in some critical way – and every time the ex-Knight scored the Sea Eagles’ sense of invincibility seemed to soar, until it felt more like a matter of years than a matter of weeks since their devastating home loss against the Dragons. Less than ten minutes later, Uate brought home the next Manly four-pointer on the back of another dead ball from the Bunnies – this time Farah’s doing – and another seven tackle set. 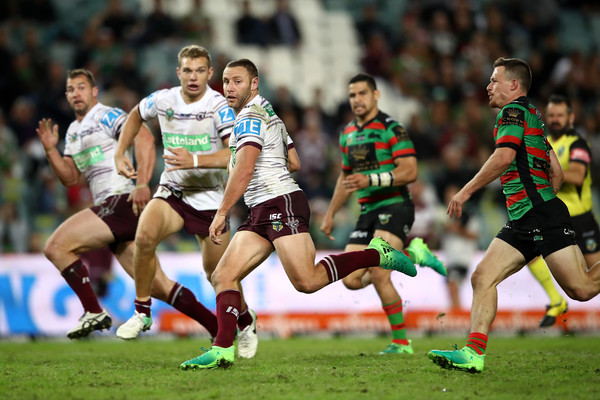 The ball passed through so many Sea Eagles hands that it was effectively a team try, but the key role came once again from Walker, who had to find a way to get the Steeden to his winger with Bryson Goodwin smack bang in the middle of the way. His solution: wait until the last minute, force Goodwin to tackle him, and then hand the ball over to Uate, in the most perfectly timed try assist we saw in Round 9. 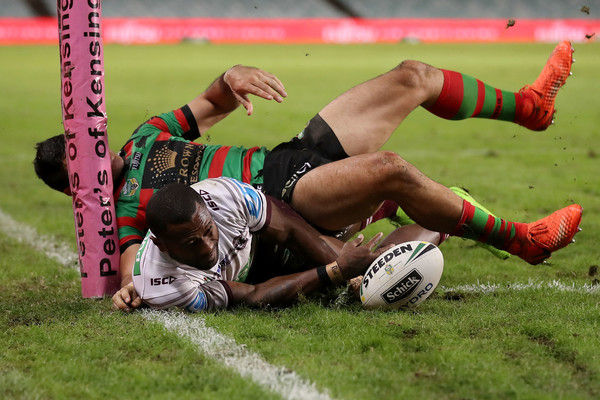 As if that weren’t enough, Walker dragged in three defenders at the one hour mark, providing Uate with room to crash over once again, in his eighth career hattrrick. Ten minutes later, Uate managed his second career fourtrick, once again at the expense of the Rabbitohs, but this time with the Sea Eagles, placing himself in the company of such illustrious forbears as John Hopoate and Steve Menzies. Once again, it came at the end of a set bookended by Walker, who regained possession with intercept so deft and seamless it was almost as if he were a part of the Rabbiths line, and then finished off the set sending a harbour bridge pass to Uate from the midst of a brutal tackle. 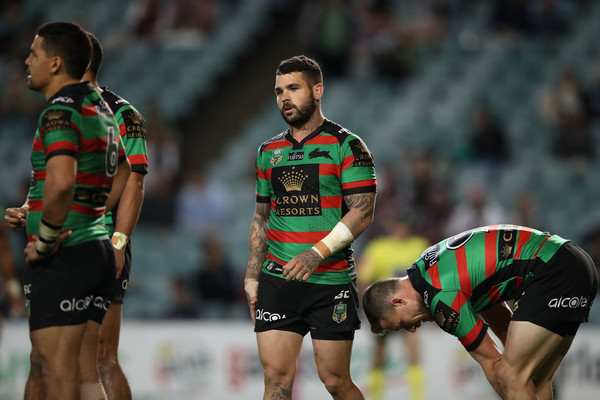 If that sounds like I’m just listing tries, well, that’s how it felt to watch the game as well. As fate would have it, I didn’t actually see the game live but taped it and watched it a day later. Although I tried to avoid NRL media, I heard about the scoreline – and Uate’s four tries – in the interim, and yet this was one of those rare games that are actually enhanced by knowing the score in advance. As excited as Uate and the rest of the Sea Eagles were with his first try, they had no idea what was in store – a game in which Walker and Uate momentarily felt like the most potent and powerful wing-centre combo in the entire comp. 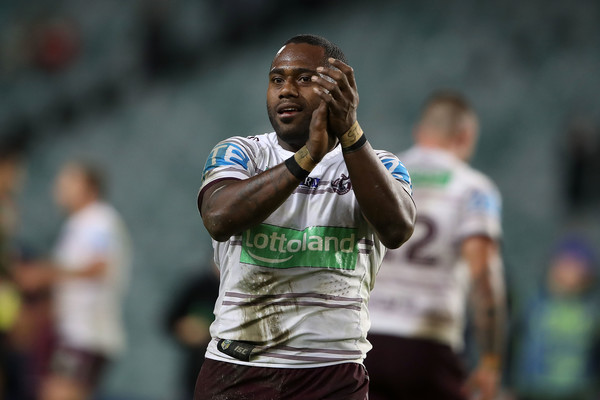 As much as Walker and Uate might have stolen the spotlight, however, it was a team effort from the Brookvale crew, wirh Jake Trbojevic and Blake Green also contributing two tries I haven’t even mentioned yet, at the end of the first and second halves respectively. Three minutes out from the first siren, Tom Turbo was tackled a metre or so out from the Bunnies’ line and managed to get the ball over to his brother miliseconds before it hit the ground. 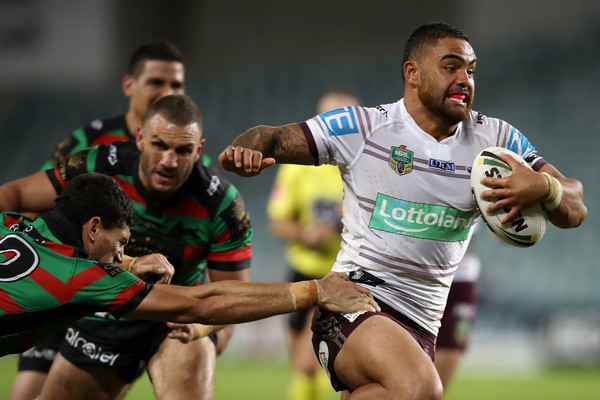 The sheer gymnastics of the try clearly wowed the audience, but it did more than that – for a moment it seemed like a vision of the future, a clear guarantee that the Trbojevics would eventually be as good – if not better – than Brett and Glenn Stewart at their best. With the Prince of Brookvale limping out of the spotlight over the last eighteen months there’s been no clear handover, so there was something cathartic about the way in which the try so emphatically and decisively claimed the new look Sea Eagles as the Trbojevic’s own. 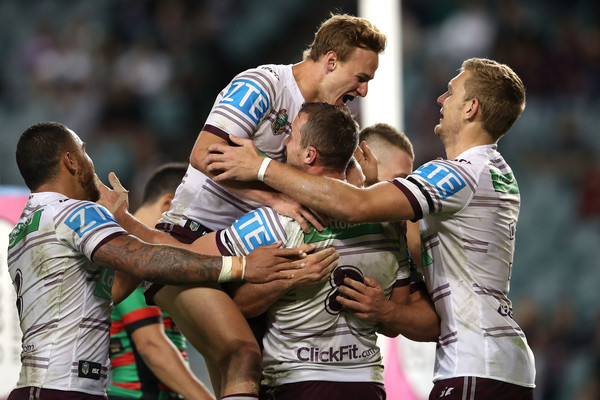 This was probably the moment of greatest humiliation for the Rabbitohs as well, not least because their performance in those last few minutes was so lacking. After putting through try after try, it was almost as if the Sea Eagles were playing with a dummy team or doing a tryscoring demonstration, rather than fronting up against a genuine defender. To some extent, Hymel’s four-pointer at the fiftieth minute took some edge off the humiliation, but it was too little too late, especially since the try was a bit suspect, with Hymel spending a lot of time in the tackle before actually – or apparently – grounding the ball in what looked a bit like a double movement, but was deemed to be a try by the ref. 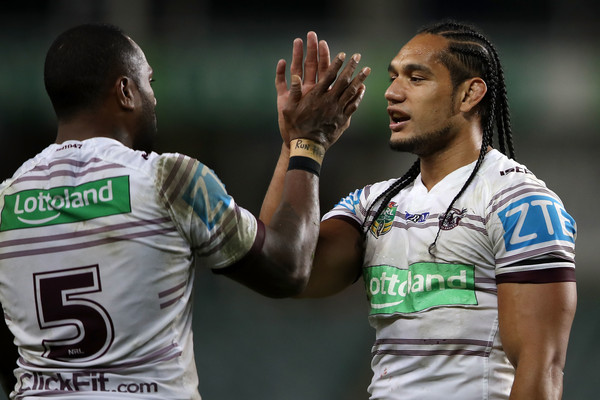 By the time Green brought in the last try of the night, then, the Rabbitohs were well and truly beat, with Sam Burgess’ haggard face during the preceding interchange saying it all, not least because he was the strongest player in the cardinal and myrtle over the course of the evening. On the other hand, Green has really been coming into his own as a Manly half, with his short kicking game proving critical in establishing the repeat sets that gave the Sea Eagles their momentum and energy. 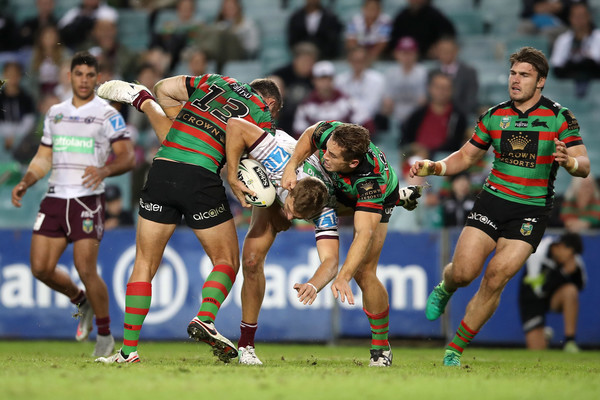 While I don’t want this to simply read as a Sea Eagles love-in, it’s also worth mentioning how Marty Taupau has found a new dexterity to his game. I’ll admit that when he was at the Tigers I sometimes wrote him off as a fairly unimaginative prop, but he’s shown that he has brains in a new way this year as well. Time and again, his size and strength drew in a huge number of Bunnies defenders only for him to offload before the opposition could reform their defensive line, buying the Manly players terrific field position each time. 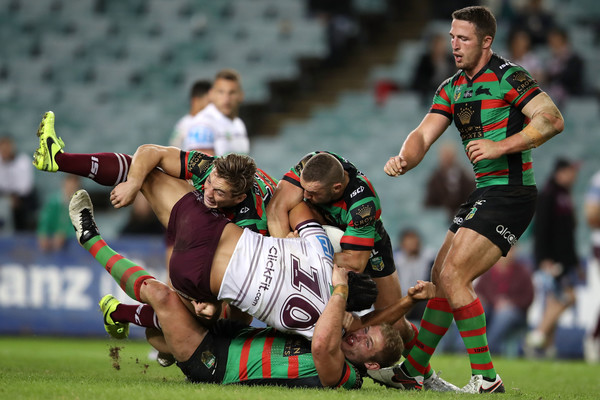 In fact, it’s probably not too much of an exaggeration to say that Kapow is well on his way to becoming one of the NRL’s masters of second phase play if he plays his cards right – and combined with his sheer bulk and muscle power that’s a lethal combination. No other player personified the Sea Eagles drive quite like he did on Friday night, and it’s going to provide the Brookvale boys with the motivation they need to take on the Broncos at home in Round 10. Meanwhile, as a Wests Tigers supporter, I can’t hope that the Bunnies win next time, but I don’t think anyone would begrudge them a less humiliating loss, if it does come to that.