Thursday night’s match at ANZ offered us the most promising vision of the post-Thurston Cowboys yet, with the visitors managing to win five straight games against the Bulldogs – and five straight games at a major NRL venue – for the first time in team history. Key to that was Michael Morgan’s fifth tackle play and organisation with the boot, paired with an impressive kicking game from Ethan Lowe, who managed to add the extras to all but one try. 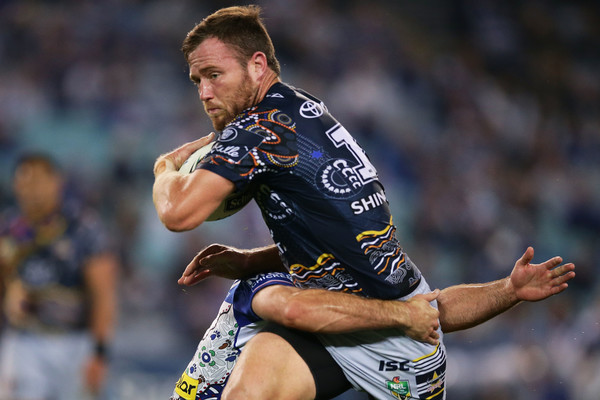 It didn’t help, either, that the Dogs put in one of their most disheveled and disorganised efforts in some time, with Canterbury-Bankstown only really feeling as it they might come back from behind at one key moment. Twenty minutes out from the end, they enjoyed a series of repeat sets during which Ray Thompson was sin binned after giving away three penalties in six sets. With Gavin Cooper looking as if he might follow suit after a particularly heated exchange wit Matt Cecchin, it was almost a carbon copy of last week’s clash between the Rabbitohs and the Sea Eagles, when Manly also found themselves one penalty away from the bin. 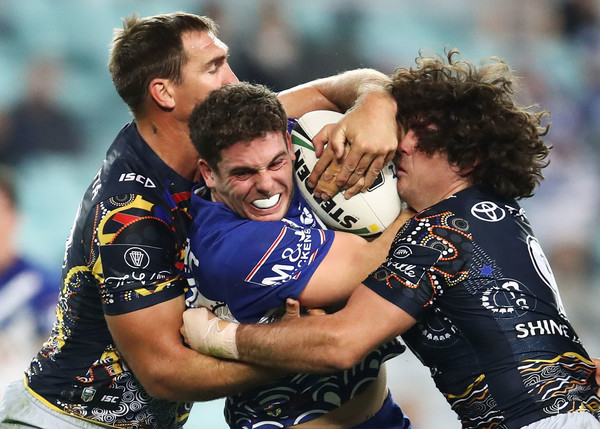 To their credit, however, the Bulldogs managed to make the most of Thompson’s absence, even if Michael Lichaa did lose possession two tackles into the subsequent set. With North Queensland’s stand-in halfback off the field, Kerrod Holland put down his second try of the night at the 68th minute and Danny Fualalo answered with a back-to-back try on the next set. In one move, the Bulldogs ran the length of the field, as the Steeden changed hands from Josh Jackson to Brenko Leeto Matt Frawley to Moses Mbye to Holland, who almost managed a third try only to flip it over to Fualalo just before being brought to ground.

It was a team try that showed what the Dogs could have done with a bit more of a competitive advantage, but with Thompson returning to the field on the next set the Cowboys felt dominant once again, as they had been for most of the game. Indeed, their momentum had started five minutes in, with Kyle Feldt managing to put down the first four points off a nicely weighted crossfield kick from Morgan. Seeing what was coming, Brett Morris ran hard at the ball, but so hard that Feldt was able to just stop suddenly and allow the winger to continue on his trajectory before moving on to plant the Steeden over the line.

It was to be the first in a long line of trymaking kicks from Morgan, who brought in his own four-pointer twenty minutes later. Choosing to run the ball, he managed to dodge both David Klemmer and Moses Mbye right on the Bulldogs’ line, slicing between them with some of the deftest footwork of the match. Morgan’s grubbers also set up Coen Hess for the third and fourth North Queensland tries, which came shortly before and after half time, cementing the visitors’ control over the pace and narrative of the match as a whole. 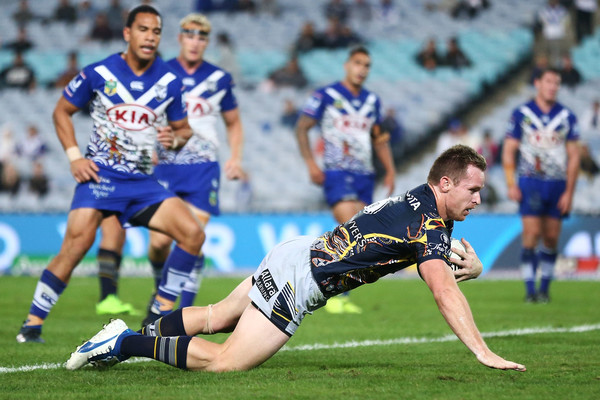 Full credit has to go to Hess, however, for how deftly he managed to make good on Morgan’s grubbers, kicking the first on himself and than leaping onto it to drag the ball over the line as he pivoted around it and ricocheted off the goal post. It was a particularly smart piece of play, as was Hess’ contribution after half time, when he took advantage of a particularly nasty bounce on Morgan’s ball that defied Brett Morris – and Morgan himself – but didn’t prevent the burly front-rower storming over to clean up.

Over the latter part of the second stanza the absence of Thompson certainly gave the Dogs a competitive edge, partly because it seemed to reiterate Thurston’s absence to the team as well, who played with much less organisation and structure than they had demonstrated over the rest of the match. Still, Ben Spina’s try at the 74th minute – once again off a kick from Morgan, paired this time with a rapid play-the-ball from Lachlan Coote – reasserted North Queensland’s supremacy, as well as the efficient communication between their spine and back line.

For the Bulldogs, then, it’s back to the drawing board before they take on the Roosters next weekend for their third home game in a row. For the Cowboys, however, it’s the best evidence yet that they can bank on a future without Thurston, as well as one of the most concerted and focused performances from Morgan all year. While Morgan himself has always been open about his dependence on his halfback, Thursday night also suggested how J.T.’s absence might push Morgan to new heights as well, and it’ll be interesting to see how he steps up in the following weeks.