The Rabbitohs have delivered a stunning turnaround after their drastic loss to the Sea Eagles last weekend and reversed their loss to the Wests Tigers in Round 1 this year as well, thanks in large part to a series of positional shifts that have provided them with their most stable configuration of the season. Between moving Alex Johnston to the wing and Cody Walker to fullback, placing John Sutton at five-eighth and starting Robbie Farah in the no. 9 jersey and giving him a full eighty minutes, the Bunnies may have just found the formula they need to have a genuine crack at finals footy in the back end of 2017. 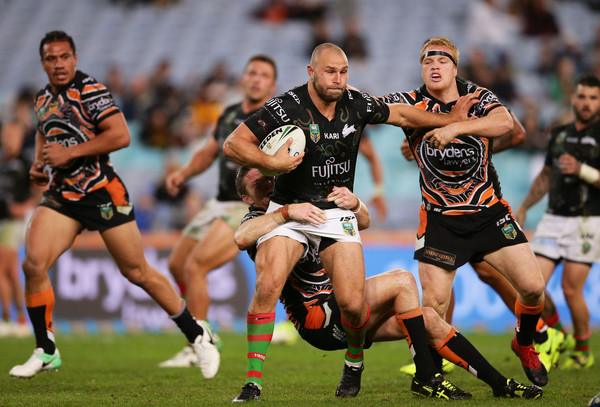 Farah, in particular, shone at ANZ on Friday night, taking on some of the halves’ responsibilities and striking the perfect balance between running the ball and passing to his first and second receivers – a performance that couldn’t be better timed in the buildup to the first Origin match amidst speculations about Peter Wallace and Nathan Peats as contenders for Blues hooker. You could tell, in Round 1, that Robbie wasn’t happy about how he fronted up against his former club, and Friday night’s match seems to have been an opportunity for him to put some of his ghosts to bed and to assert his independence from the Tigers’ jersey in the process. 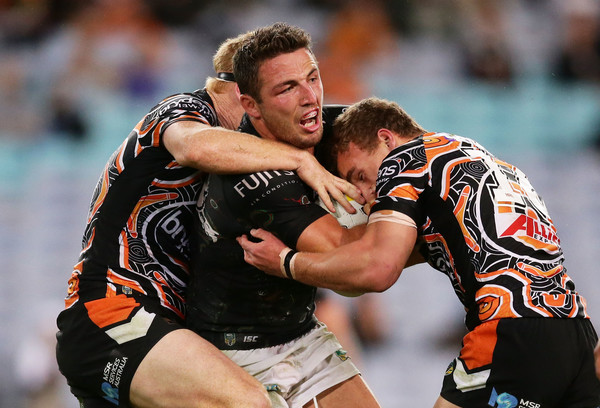 Given the fragile state of the Tigers at the moment, it’s no surprise that Farah’s explosive presence made for a pretty convulsive game. With the rain settling in pretty heavily, it was already a pretty messy, error-prone affair, with three handling errors from Tom Burgess in the first fifteen minutes and three more from Moses Suli in the first half hour. Add to that a pretty spotty night from James Tedesco and Mitchell Moses and tempers were at fever pitch by the time that Farah gave the Tigers a penalty for holding down Matt McIlwrick, halfway through the first stanza. As if channelling all the frustrations of the club over the last six months, Ava Seumanufagai threw a punch at his former team mate, and ended up finding himself sent to the bin. 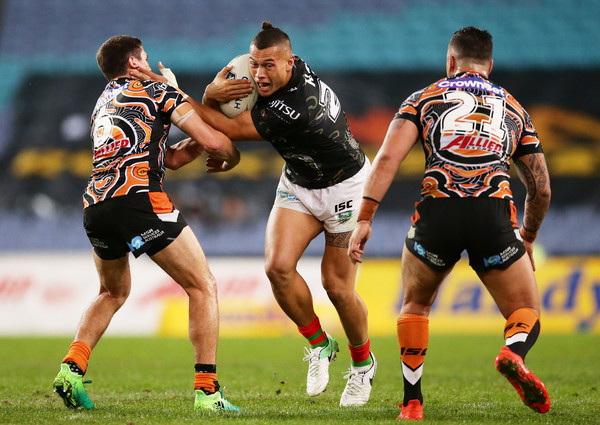 The fact that the Tigers still got the subsequent penalty just intensified the suspense, so it was only a matter of time before another fight broke out – this time just before the first siren, as a shove from Aaron Gray on Luke Brooks looked set to spill into an Origin-worthy fracas before the leaders of both teams intervened to clean up and Henry Perenara got the action going again as quickly as possible in order to channel all the aggressive energy back into gameplay during those critical final moments. 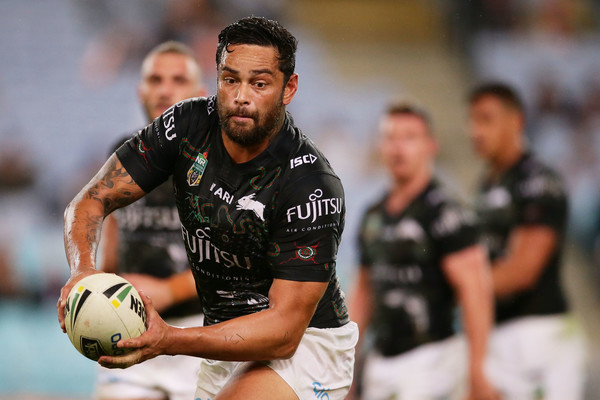 It was a skirmish that would seem, in retrospect, to encapsulate the Tigers’ impotence over the course of the game. Throughout the entire evening, they only managed one try and even then only on the back of Farah’s first handling error as he tried and failed to scoop up a Luke Brooks grubber, gifting Elijah Taylor the opportunity to grab the Steeden and plant it right under the posts four minutes into the second half. 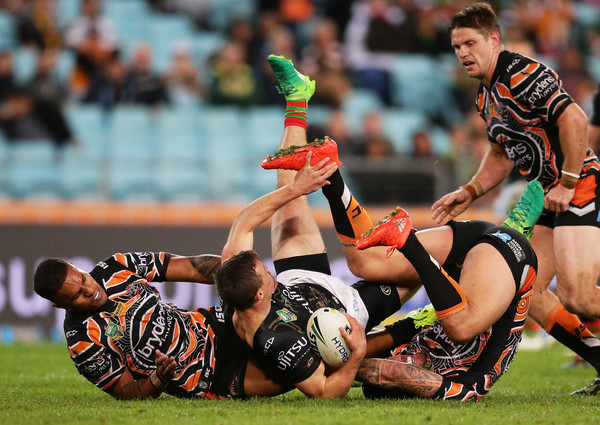 Apart from that, the Rabbitohs mirrored the Sea Eagles two weeks ago, bringing home tries so effortlessly and elegantly that it almost felt as if we were watching a training session or a tryscoring demonstration rather than a fully-fledged game of NRL. As much as Johnston is yearning to play fullback, his stint on the win paid immediate dividends, resulting in the first tries for the Bunnies in both stanzas. Supported by a harbour-bridge pass from Walker at the 12th minute and a brilliant play from Sutton at the 48th minute, both four-pointers were a testament to the efficiency and economy of the newly reconfigured Souths outfit. 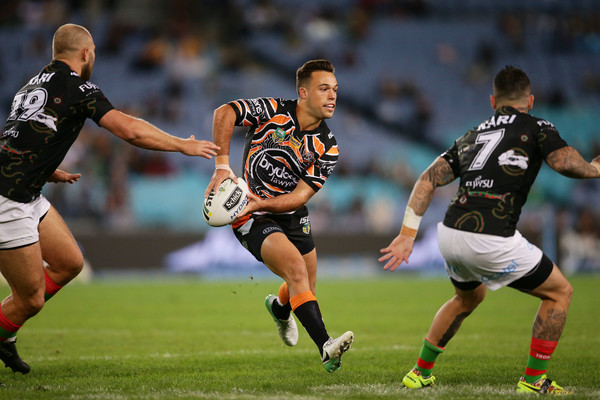 Sam Burgess also managed two tries over the course of the evening, each of which were dependent upon Farah’s speed and vision from dummy half. Midway through the first half, Farah chose to run the ball, making a few dummy passes before collecting enough defenders to provide Sam with enough space to make it across. Ten minutes into the second-half, a well-timed short ball from Farah provided Burgess with another opportunity, and the big man slammed through Tedesco like he wasn’t even there to put down four more points. 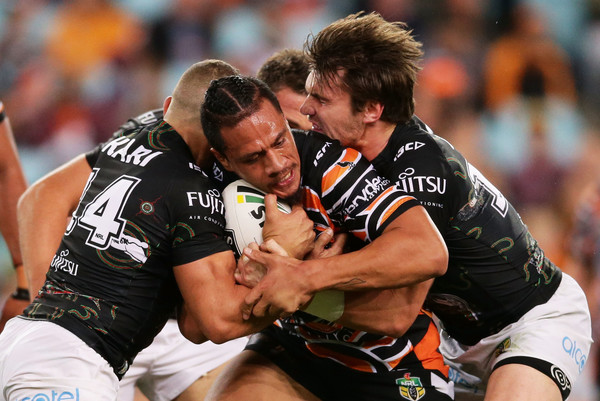 Still, Farah’s most impressive moment arguably came on the stroke of half time, when he managed a brilliant wide pass out from the ruck that managed to edge out several Tigers defenders and find Burgess at just the right time. From there, Sam and Reynolds took advantage of Farah’s momentum to get it over to Angus Crichton, who showcasde his rugby credentials by managing to run a full thirty metres to the line without a single touch from the home team. 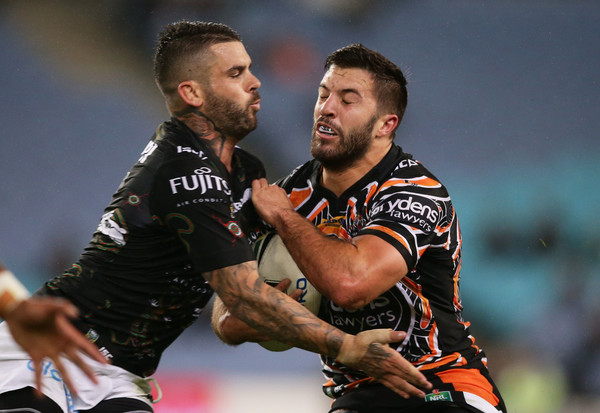 In retrospect, then, it may turn out that the flogging at the hands of the Sea Eagles was just what the Bunnies needed – the straw that broke the camel’s back in terms of actually getting Michael Maguire to commit to the positional reconfigurations that have been looming around the team’s performance as a possibility all year. As a Tigers fan, the loss was hard, but it’s also great to see Farah thriving, and elevating him to starting hooker seems to be a fairly obvious trajectory for Souths in the next couple of rounds. 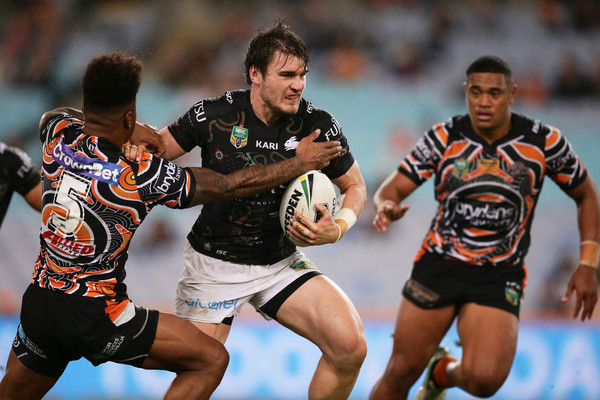 At the same time, it’s hard to deny that the reorganisation of Walker and Johnston reaped rewards as well, while Sutton was equally impressive in the halves. All in all, then, it may just be that the Rabbitohs have stumbled upon the formula that they needed in the absence of Greg Inglis – and for the first time this year his absence didn’t feel particularly oppressive. On the other side of the Steeden, the Tigers have chalked up yet another loss, placing even more pressure on Ivan Cleary to bring home a win – however unlikely – against the Broncos next Friday.