Mitchell Moses has now played the Rabbitohs for the second time in almost as many weeks – an appropriate backdrop for what felt like a gesture of revision from the new Eels five-eighth on Friday night at ANZ. As if determined to relegate his underwhelming start for Parramatta and his underwhelming end for the Wests Tigers to the past, Moses fronted up to the Bunnies with a conviction and purpose that he hasn’t shown in weeks, and played a critical role in providing the Eels with one of their most satisfying wins of the season so far.

From the outset, Moses stamped his signature on the game, setting up Tepai Moeroa for the first try of the night only eight minutes in with some deft, dodging footwork. Ten minutes later – and barely two minutes after having been subbed on – Beau Scott came up with another four points after Cody Walker lost the ball in-goal area, culminating a bit of an assault on the new Souths fullback over the first part of the game that often made it feels as if the Eels were targeting the Rabbitohs’ confidence in their “new and improved” arrangement as much as the individual players themselves. 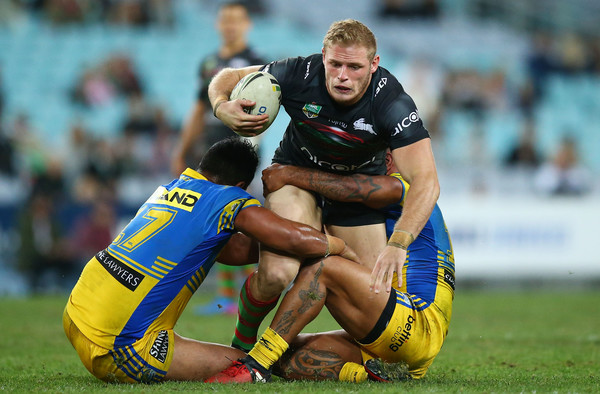 Once again, Scott’s try had a bit of Moses in it, since it came at the end of a set that started with a brilliant, skittering run down and across the field that initially looked like the new resident five-eighth might be about to put down his first four points for the team. It has to be said, too, that Moses’ game looks a lot better when he’s not required to be a goal-kicker, with Clinton Gutherson adding the extras over the course of the night with more confidence than Moses ever really showed when he was at the Tigers. 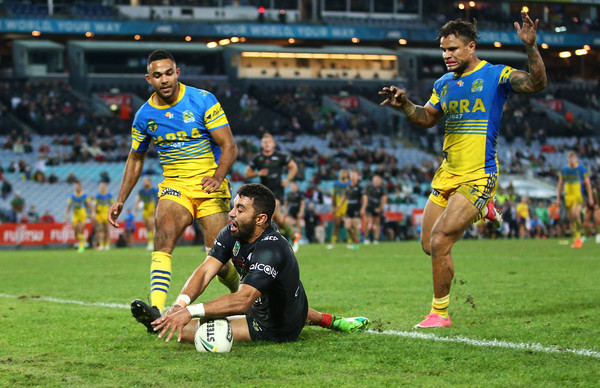 Ten minutes later a brilliant run and some dangerous footwork from Gutherson allowed him to link up with Semi Radradra right on the cusp of the Bunnies line – and then propel him through it. Leaving a handful of struggling Rabbitohs defenders in his wake. Semi coasted around and planted the Steeden right behind the posts, in one of the most elegant movements of the entire night. For a while there, Semi seemed like the great hope of the Eels, and there’s still something galvanising whenever he scores a four-pointer that seems to provide the team as a whole with a fresh surge of momentum. 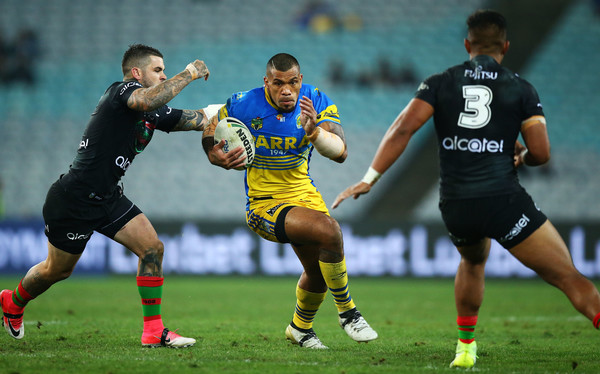 If that just sounds like a list of tries, well, that’s how the first half largely played out, with the Eels comfortably dominating field position and possession while showing no signs of slowing down. On top of that, the first forty ended very badly for the Bunnies, who were gifted a series of penalties right on the Eels line, one of which came from Suaia Matagi tripping up Anthony Cherrington and forcing him to collide with the referee. 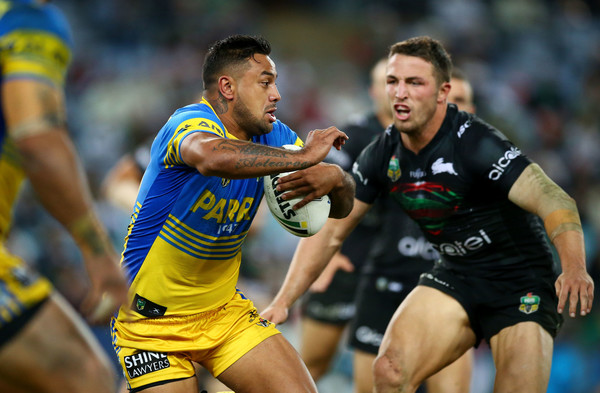 As the successive sets escalated, the Rabbitohs couldn’t manage to make good on their field position, culminating with a shove from Beau Scott on Zane Musgrove during the play-the-ball – which should have been penalised – having a ripple effect on Robbie Farah’s subsequent pass out of dummy half. From there, Walker coughed up the ball and returned possession, finally, to Parramatta, but not with all the pent-up frustration of the Bunnies almost erupting in one of the biggest fights in weeks. 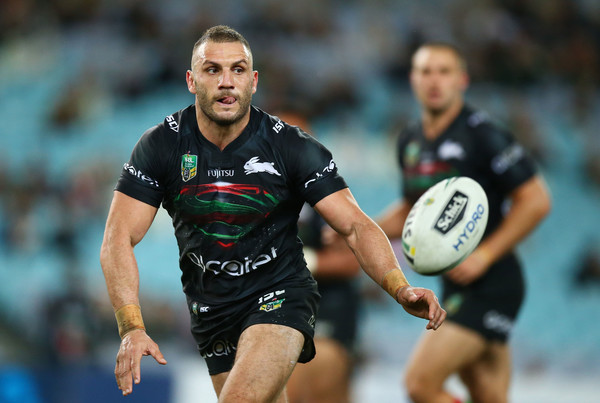 Not only did it feel like a dress rehearsal for the added volatility and intensity of Origin, but Farah’s frustration, in particular, seemed to speak to his response about being looked over for Nathan Peats. Certainly, his performance against the Eels didn’t do anything to question that decision – it didn’t reach his brilliance over the last few games – and it must have been frustrating for him not to be given the opportunity to showcase his talent on the eve of Origin 1. 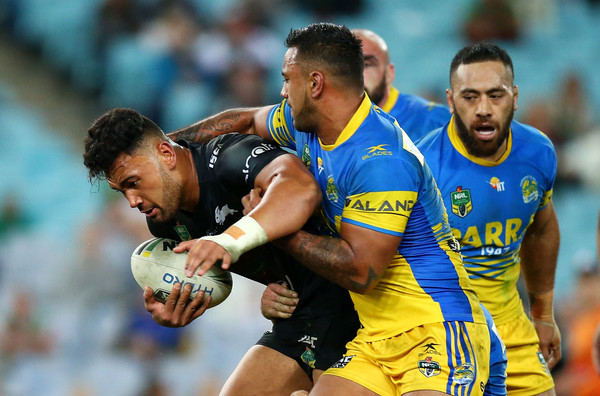 Once again, the Bunnies were gifted a series of penalties after half time and, once again, it all went flat, thanks in part to a forward pass from Robbie Rochow at just the wrong moment. By this stage, they desperately needed something spectacular to provide them with a shot at winning – and, incredibly, they delivered, with Angus Crichton putting down the first points for the cardinal and myrtle in what initially looked to be a real game-changer.

In a blistering display of speed and strength, Semi had run the length of the field, only for Hymel Hunt to effect a one-one-one strip and send the Steeden over to Crichton, who upstaged Semi by dashing ninety metres down the other end. It was all the more impressive in that Kaysa Pritchard almost got to Crichton in time, but only managed to bring him down once he had reached the in-goal area, right beneath the posts. In the conviction in which it outplayed Radradra – and responded to Radradra’s earlier try – it was exactly the kind of four-pointer the Rabbitohs needed to regain momentum.

Much of the Bunnes’ subsequent effort hung around two brilliant efforts from Johnston on the wing, but before that Josh Hoffman managed to put down the most gymnastic try of the night at the sixty-fourth minute, showcasing exactly the kind of dexterity needed for Parra to regain momentum as the Bunnies started to dominate field position and possession. Part of what made Hoffman’s four-pointer so uncanny was that it felt as it it had been made by another player, with the new Parra winger channelling Tupou, Rapana, Vunivalu – al the most prodigious and entertaining flyers in the NRL – to plant the ball right in the top right corner of the field while hovering on the very edge of touch.

The subsequent Bunker replay showed just how close Hoffman had come. As he squared up the Steeden, the heel of his foot had been planted in the field of play, while the ball of his foot had hovered over the sideline but never quite came down. It was the kind of try that defies any debate about conscious intention of pure luck, since it was clear that, in that moment, Hoffman was acting out of pure footy intuition – an intuition that was all the more impressive in that he’s had a few spotty moments for Parra over the course of 2017. 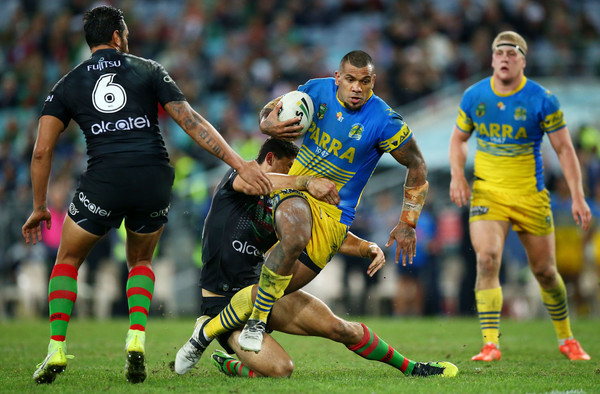 If this final four-pointer felt like Hoffman’s decisive arrival at the Eels, then it also cemented Moses’ involvement over the course of the game as well, with a deft flat pass from the new five-eighth to Kirisome Auva’a setting up the play in the first place. Between the ex-Tiger and the ex-Titan, it was a promising moment for this new-look Eels outfit, and demanded that the Rabbitohs provide something extra special to make up for it.

Fortunately, for Bunnies fans, the team more than delivered, with two tries from Alex Johnston down the left wing momentarily making it feel as if Souths might just come up with the momentum they needed to win it. Given that the new-look Rabbitohs outfit hadn’t gelled as well as last week – Sutton was quieter and Walker struggled under the high ball and around the in-goal area – Johnston’s final surge seemed to affirm Madge’s plans, even if it also reiterated Johnston’s own burning desire to lead the team from fullback as well.

Yet while Johnston’s first try was undoubtedly impressive – a powerful burst down the left side of the field – it also felt a bit undeserved in that it came off the back of a disallowed try from Will Smith. This almost-try was set up by yet another brilliant run from Hoffman, followed by a pass that was called to be forward but which, upon replay, turned out to be perfectly alright. It was a great example of how damaging one bad call can be, especially at a time in the season when finals contention is a major issue, and I’ve got no doubt that the subsequent momentum helped propel Johnston through to his second our-pointer.

Of course, that’s not to take away from Johnston’s try at the seventy-ninth minute, on the back of a terrific chip from Adam Reynolds that landed right on the goal-line. Showcasing his fullback attributes once again, Johnston showed great judgement in allowing the Steeden to bounce before grounding it, even if it initially looked like a knock-on (and from some angles still looked like a knock-on in the replay). It was a great throwback to last week’s match against the Tigers, providing the Bunnies with some much needed continuity as they look forward to taking on the Broncos after the bye. 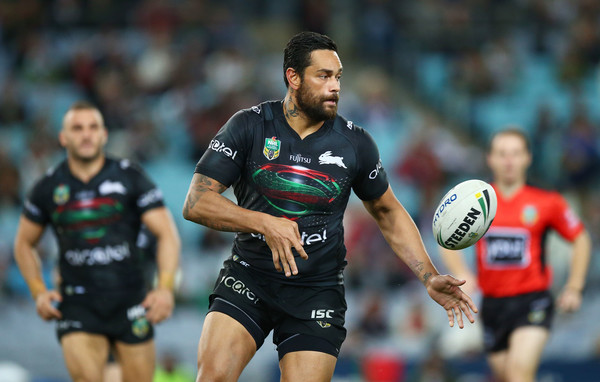 Johnston’s talent aside, however, the match was a worrying example of how bad referee calls can really change the momentum of a game. Of course, refs are human, and there is always a margin of error, but hopefully, with two on the field, these kinds of mistakes become less and less common. At the same time, it only reiterated the strength and grit of the Parra victory, and Moses and Hoffman will both be looking to continue cementing their rapport with the team when they take on the Warriors at ANZ after Origin.