Saturday’s match at ANZ Stadium saw some fresh faces on both sides, with Gareth Widdop returning for the Dragons to put down the first twelve points of the game, Tuimoala Lolohea making his debut for the Wests Tigers, and Esan Marsters making his debut in the NRL full stop. For the most part, it was a fairly uneven contest, with St. George-Illawarra clearly dominant over the course of the afternoon, and always on the verge of busting through a fragmented and dishevelled Tigers defensive line.

That said, Saturday’s game was a real turnaround for James Tedesco after his lacklustre performance against the Broncos two weeks before. When it comes to fixtures immediately after Origin, players tend to go one of two ways, either succumbing to total exhaustion or managing to channel and continue the high of representing their state. Teddy was in the second category, with his defensive brilliance continuing undiluted as he single-handedly prevented Josh Dugan breaking into open space just before half time, stopped Sims from going over the line moments before, and contributed several critical tackles to forestall a try from Jack de Belin early in the first stanza, only for de Belin to be deemed offside anyway.

In other words, this was clearly a man who’d played his best very game of football a couple of days before, and by the time the match had finished it felt as if Tedesco had managed to stop pretty much every Dragons player at one point or another. Still, not even Tedesco was enough to stop the St. George-Illawarra surge, with Tim Lafai giving Martin Taupau a run for his money in the dexterity and precision with which he set up second phase play across the afternoon, and the big men putting in a pummelling performance that not even Aaron Woods was able to combat. 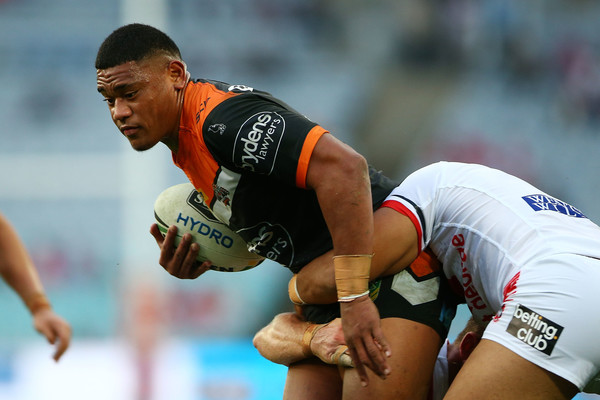 By the time we were halfway through the first stanza it was clear that this was going to be Widdop’s afternoon – a bad omen for the Tigers after their scoreline against the Dragons in Round 5. His first try was effectively a team try – so many classy moves went into it – although special credit has to go to Kurt Mann for a dodging, skittering run across the field that helped cement some set structure after the Steeden had made its way in the opposite direction a couple of passes before.

Combined with some great decoy work from Lafai, along with a brilliant split-second decision from Widdop to run the ball, it was clear that the St. George five-eighth’s footwork had returned with a bang and fifteen minutes later he went over again, after a massive tackle from Jason Nightingale on Kyle Lovett set him up for an intercept. Running half the length of the field and then converting to put down the first twelve points of the game, it was the show of strength the Dragons needed to run the Tigers ragged over the next sixty minutes.

That’s not to say that the Tigers had nothing to offer, however, with Kevin Naiqama putting down four points five minutes into the second half, off the back of a deft pair of passes from Jack Littlejohn and James Tedesco. It was a cathartic moment, and not just because it represented the first try for the Tigers in the last three weeks, but because the team had spent most of the set making short passes right on the goal line that had been shut down immediately by the Dragons defenders. 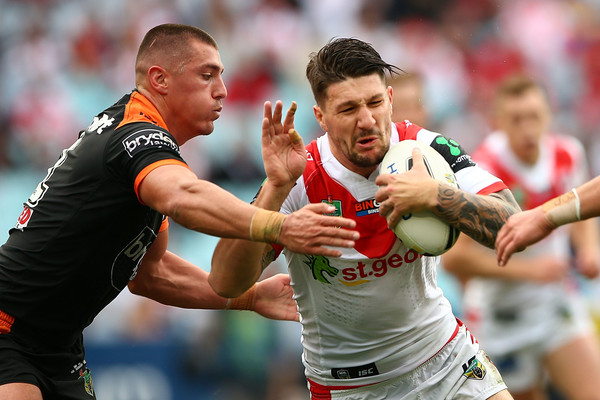 Given that the Tigers had also received two penalties in a row – the first for a particularly brutal tackle on Elijah Taylor that forced him to cough up the ball – it was critical that they score at this juncture to have any chance of regaining momentum across the second stanza. It was a temporary victory though, as a wide pass from Cameron McInnes paired with a short pass from Hame Sele five minutes later put Tyson Frizell in open space, where he gained enough traction to plough through two Tigers defenders on his way to the line.

Like most big props who are also fast on their feet and dexterous with ball in hand, Frizell is a bit of a momentum-builder, and while his try might have been the last of the night for St. George-Illawarra, it decisively undid the conviction that the Tigers had just started to build. By the time Michael Chee Kam put down four points five minutes out from the end, it was clear that all the Tigers could really hope for was a consolation try. Still, it was an impressive four-pointer in itself, concluding a set that started with a line break from Tedesco that would itself have culminated in a try if Josh Dugan hadn’t brought him down with a terrific low tackle, followed by a brilliant short ball from Marsters to mark his NRL debut.

With two minutes to go, the Tigers had anothr set, only to cough up the ball as soon as they’d got it. And, to be fair, the Dragons deserved to win, since while Dugan and Tedesco might have been evenly matched, bringing the spirit they showed for the Blues last week to wage war against each other, the Tigers were almost as scrappy as when they last faced St. George–Illawarra. In truth, too, the scoreline probably didn’t reflect the Dragons’ full supremacy, thanks in part to an unlucky bit of disorganisation at the twenty-fifth minute. 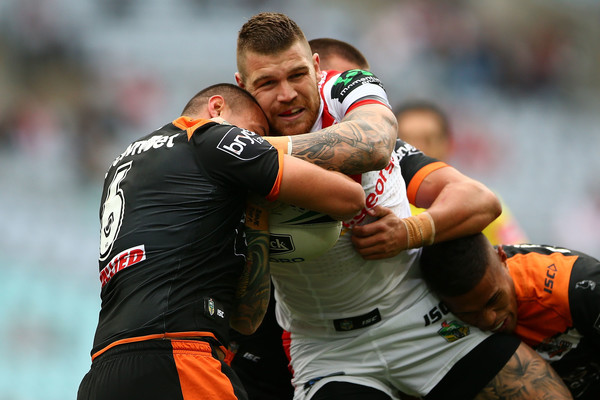 If this play had gone through it would have been one of the tries of Round 14, as an offload from Lafai at the very end of the tackle – he couldn’t have timed it more closely – led to a brilliant run and line break from de Belin, who was taken down by Teddy but managed to pop the ball back, where it changed hand a few times before Dugan skipped through the defenders and got it over the line. While de Belin was deemed offside, it was proof of how high St. George were flying even in their errors, and the Red V are going to be keen to showcase the same spirit when they take on the Dogs at the end of Round 14.