In one of the massive turnarounds that can make the NRL season so exciting and unpredictable, the Bulldogs have gone from a 38-0 loss to the Panthers at ANZ last weekend to a win over the fourth-ranked team in the League, managing to keep the Dragons tryless for the first time since 2000. It was a late-scoring game, however, with points stuck at 0-2 until Josh Morris put down the first try for the Dogs fifteen minutes into the second stanza, building the momentum for Matt Frawley and Michael Lichaa to cross over for a 16-2 finish.

Like Origin a couple of weeks ago, then, this match was so evenly placed that all it took was a slight advantage for one team to break the game wide open – a pretty incredible achievement for the Bulldogs given that St. George are currently the competition leaders for line breaks and points scored. In part, Canterbury-Bankstown were assisted by some sloppy defense from the Dragons in the second half, especially from some of less experienced players.

James Graham’s return was also a bonus, not just as a critical part of the front row but by offering the galvanising leadership that the Dogs needed in the wake of last week’s loss, especially since Josh Reynolds was a last-minute exclusion after having appeared to be ready to return to the field this game. Similarly, there was something powerful about seeing Chase Stanley return for his 101st game to take on his former club after being on the sidelines for nearly a year. Few players are as dignified in their bad luck with injuries as Stanley, and seeing him run out onto the field was an affirmation of a deeper Bulldogs continuity and connection to the past that transcended the horror loss a week ago. 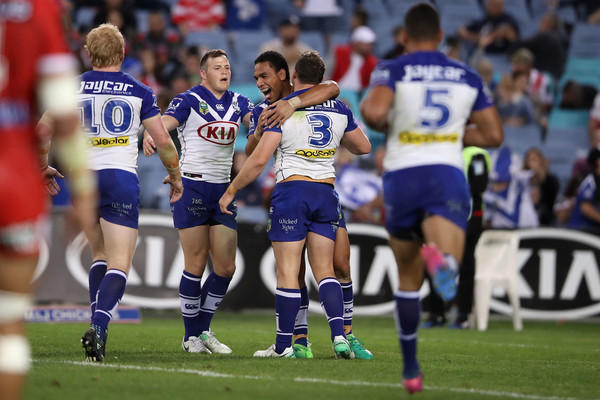 Above and beyond these contingencies, however, it was clear that the Bulldogs were still smarting from their form against the Panthers and determined to make up for it with as much possession as possible over the opening minutes of the game. They started with a bang, gaining a goal line dropout on the first set, followed by two successive penalties and a further goal line-dropout on their subsequent set. From the very beginning, Matt Frawley and Moses Mbye were running right at the defensive line, while Kerrod Holland almost stormed right through the left wing defenders like he was a steamrolling forward.

It was an agonising moment, then, when Brett Morris lost control of the ball after a perfect short pass from his brother, in what should have been the culmination of all the Dogs’ possession and field position over these opening minutes. While he made up for it – sort of – by preventing St. George scoring off the high ball in the seventeenth minute, it was a sobering moment for Canterbury-Bankstown, with Des Hasler looking graver than he did at any point at ANZ last week. 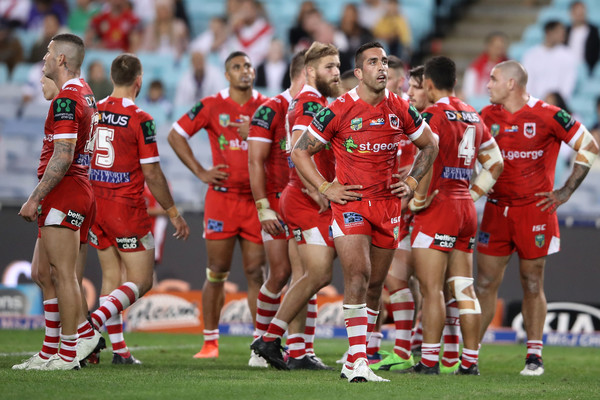 If that wasn’t enough, six minutes later, Will Hopoate threw a pass out to Marcelo Montoya in the middle of a seven-tackle set that not only missed his winger entirely but found touch at the worst possible moment. Combined with Morris’ gaffe, it felt like it might be another horror night for Canterbury-Bankstown, and yet I now wonder in retrospect whether these additional frustrations were what the Bulldogs really needed to build to their final surge – or, alternatively, if they would have managed to hold the Dragons out so decisively if they had actually scored in the opening stanza.

Things took an interesting turn in the lead up to half time, as the Bulldogs renewed their defensive effort to prevent some big Dragons attacks right on their line, culminating with an incredible charge from Jack de Belin that they somehow managed to shut down. As things were reaching a critical head, Sam Kasiano was penalised for a tackle on Josh Dugan, after which Dugan himself almost made it over the line, only for the Dogs to bring all their cover defence to bear on keeping him out with barely half a metre to spare.

In the process, however, Dugan copped a head knock, and was sent off for a HIA assessment. You could tell he was frustrated, and rightly so, since he’d been critical to the St George momentum over these final minutes, and I think it’s more than likely that the Dragons would have managed to score if he’d still been on the field. It would turn out to be the beginning of a bad luck night for Dugan, who once again made it over the line in the second half off the back of a scrum only for the Dragons to have just exceeded the scrum clock, turning what could have been a game-changing try into an agonising changeover. 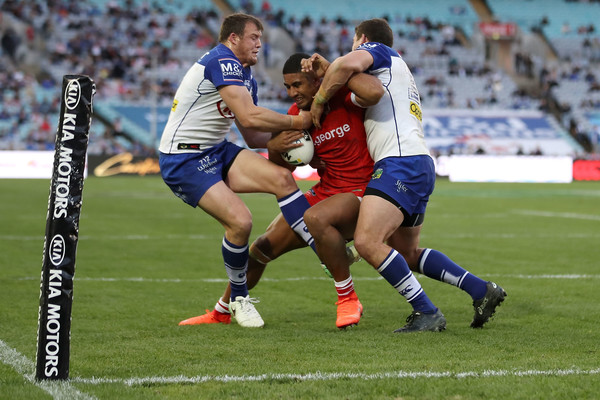 As if sensing their advantage at the end of the first stanza, the Dogs abruptly changed their strategy and went for a much longer goal-line dropout than they’ve generally demonstrated this season, forcing a St. George error in the process and regaining possession two minutes out from the siren. While they didn’t manage to score, they did manage to prevent the Dragons from scoring, and at this point in the game that was more than enough. 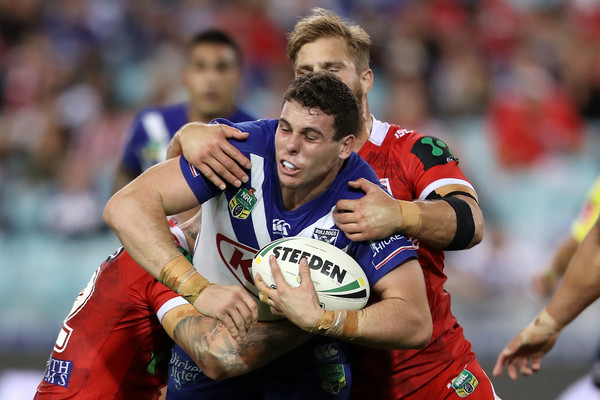 When the Dragons returned after half time, they’d made the unusual decision to replace Kurt Mann with Taane Milne – a decision I can only attribute to the need to mix things up a bit and break the deadlock, since Mann hadn’t been injured or demonstrated especially poor form over the first stanza. If anything, Milne would turn out to be a bit of a chink in the St. George armour over this second half, and almost a symbol for the Dragons’ frustration and impotence, epitomised by his slap on Josh Morris that saw him binned three minutes out from the end. 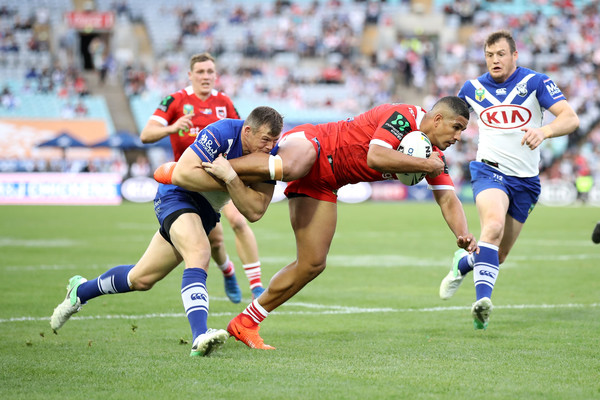 At the same time, Canterbury-Bankstown were struggling, especially with fifth tackle options. Nowhere was that clearer than in Frawley’s inexplicable decision to kick halfway through a flowing set five minutes in, only for Dugan to clean it up on the full. While Mbye might have cleaned things up nicely a couple of sets later and prevented a likely St. George try after a well-weighted kick from Gareth Widdop, the halves initially felt much closer to the game we saw against the Panthers than their form over the opening minutes here.

Things changed, though, with Josh Morris’ try at the fifty-fourth minute – the shift in power that the Dogs needed to really rack up some momentum. After a high kick from Frawley, Stanley managed to pop the Steeden back, where it changed hands a few times before Hopoate ran it right up the left side and broke through the line before sending it over to Josh Morris to plough through a fairly underwhelming tackle from Hame Sele and put down the first try of the night.

Not only was a try cathartic in itself by this point in the game, but it was also exactly the kind of try that the Dogs needed to rebuild some belief in themselves. For one thing, it felt as if Josh was making up for Brett’s frustrating moment earlier in the game. For another thing, it was great to see Stanley playing such an important part in his 101st game. Similarly, it was terrific to see Hopoate running through the line in such an uncharacteristic manner and position, while the fact that Frawley’s kick hadn’t been all that spectacular to begin with suggested that Canterbury-Bankstown could still win it without necessarily having the best fifth-tackle options on the night. 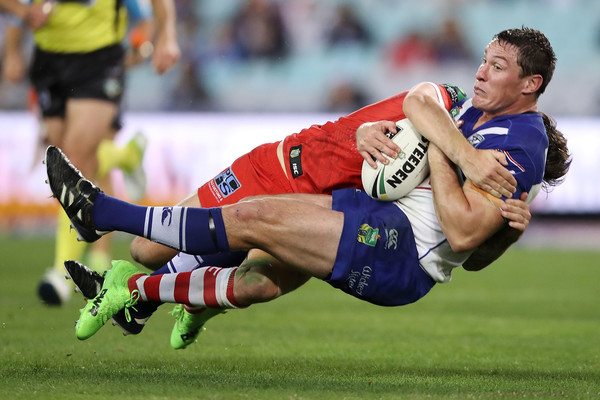 Sure enough, Michael Lichaa went over again fifteen minutes later, after a rapid play-the-ball from Graham allowed him to dart through the defense right on the St. George line, leaving the Dragons looking disheveled and disorganised. Given that Taane Milne had put in a massive hit on Frawley a couple of sets back, it must have been frustrating for him to be out of position as Lichaa charged through, and It was only a matter of time before he took out his frustrations on Morris.

Five minutes later, the Dogs sent the ball up the right edge of the field in a desperate effort to muster a fifth tackle option, improvising the Steeden from one player to the next until Marcelo Montoya finally put it over the line. By this stage, it was clear that St. George were done, and yet full credit has to go to Canterbury-Bankstown for making sure that the Dragons were kept tryless, in the gutsiest final twenty minutes since the first game of Origin.

And gutsy was the best way to describe the Canterbury-Bankstown performance, with the Bulldogs managing to wrest a win in whatever way they could, despite not necessarily being the best team on the field. Sometimes those desperate, spotty victories can be more powerful than clinical, streamlined victories, and so it was at ANZ Stadium – the challenge for the Bulldogs will now be trying to find a way to retain that momentum when they take on the Warriors at Mt. Smart after the bye.