The Panthers have treated their Bathurst fans to the best single finish in the NRL this year at Carrington Park on Saturday night. In an amazing comeback, Penrith were trailing 20-12 to Canberra only to put down twelve points in the last two minutes with back-to-back tries from Corey Harawirea-Naera and Tyrone Peachey off the final set and then once again off the restart. In its own way, it was as big an achievement as the 38-0 win over the Dogs last week – and yet another heartbreaking loss for the Raiders – as the mountain men continue to consolidate their vision in the wake of Josh Mansour’s return to the wing after half a year on the sidelines.

It was a dramatic conclusion to a fairly fractious game, full of volatile changes in possession and simmering tension. Shortly before half time that all escalated as Jordan Rapana was given a penalty for backchat, Corey Harawira-Naera was sinbinned for ten minutes for a slap on Joseph Tapine, and Tapine himself was also binned for his response. With the announcement that no penalty would be awarded to the Raiders – the Penrith infraction had occurred after the final siren – it looked as if we might be in for an old school footy fight, spurred on by a cold night, a frustrating first half for both sides (but especially for Canberra) and the more visceral, grassroots atmosphere of Carrington Park.

While both teams managed to get it together before heading back to the sheds, that sense of barely concealed frustration and restless attitude never really left the field. In the first half, that led to a fairly low-scoring game, with only Rapana managing to cross for Canberra three minutes in, for his fourteenth try in fourteen games and the fiftieth of his career, set up by an artful harbour bridge pass from Jack Wighton, who played with more purpose and focus than he has demonstrated all year. At first, it looked as if this might be the beginning of yet another prodigious run for the Canberra winger, but for the most part the Panthers managed to shut down the Leilua-Rapana machine, which contributed in no small sense to the Raiders’ mounting sense of frustration.

Nowhere was that clearer than ten minutes into the secons stanza, when Mansour slid to his knees to clean up a skittering grubber from Josh Hodgson moments before Leilua took it over the line. As if that weren’t enough, Sauce managed to scoop up the Steeden and scoot thirty metres forward to get the Panthers out of their own end in the process. It was to be the – distant – beginning of the Penrith surge, with the mountain men catching a penalty on the next set and then gaining a goal-line dropout after trapping Blake Austin in the in-goal area, and then trapping Jarrod Croker in turn after Austin sought to pass to his centre partner in one of the riskiest moves of the night.

Before we even got to that point, however, Matt Moylan managed to provide two decisive answers to Rapana’s opening try. The first came twelve minutes into the game, when he tempted Wighton to move out of the defensive line too quickly, allowing him to surge straight through the defenders to put down the first Penrith points of the afternoon. One minute into the second stanza, Moylan came up with the goods once again, running right up to the line for a second time only to link with Dylan Edwards who passed the Steeden onto Nathan Cleary, who converted his own four-pointer moments later.

From there, however, Canberra started to steadily build momentum, with Nick Cotric answering Cleary a couple of minutes later. As if anxious to assert his supremacy in the no. 1 jersey, Wighton outplayed Edwards under the high ball to deflect it back to Croker, who sent it on to Cotric. From there, the young winger was able to stroll across the line quite leisurely before the Panthers’ defence caught up with the play, making Cleary’s previous try feel like a distant memory. 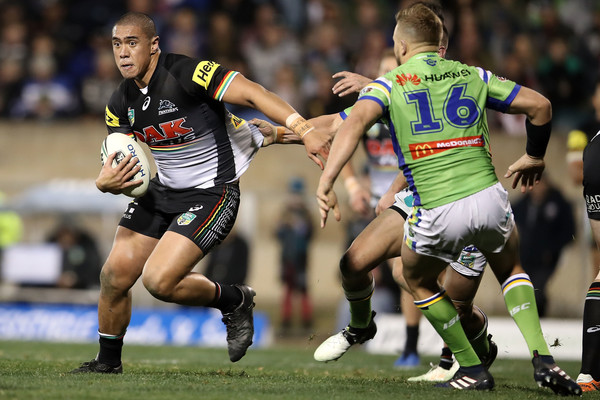 Two more tries over the next twenty minutes seemed to cement this as Canberra’s night. Fifty-seven minutes in, Elliott Whitehead caught Aidan Sezer’s high ball on the full as effortlessly as if he were the Canberra fullback and then flicked it over to Leilua a millisecond later, in an incredible display of agility for such a burly backrower. The result was all the more cathartic for the Raiders given that Mansour had blocked Leilua so decisively off Hodgson’s grubber a couple of sets before.

Things didn’t end there, however, with Cotric bringing home the fourth Raiders try after the Canberra players made the most of a penalty to go the length of the field. In some ways, the try belonged to Croker, who showcased the most consummately calm timing to draw out the Penrith defence and get the ball onto his winger. At the same time, however, Cotric’s own judgement and dexterity in getting it down cemented this as one of his key games for the year – a prodigious performance in what is already coming to feel like an early showreel for one of the great future wingers.

With the score 20-12 Canberra’s way at the 75-minute mark and Mansour knocking on – uncharacteristically – on the subsequent set, it felt as if there were no possible way that Penrith could win it, even if the Raiders were appearing to tire. When Cotric appeared to bring home his third try at the 77th minute the game seemed like a done deal, and even if the try was reversed by the bunker, it felt like enough – more than enough – to cement the Raiders’ momentum and possession over these final minutes.

Then the unthinkable happened, with both Harawira-Naera and Peachey putting down tries, each of which were indebted to Moylan’s vision, organisation and dexterity at five-eighth. For the first, Moylan dummied an inside pass only to send it out to Harawira-Naera; for the second, Moylan made four touches in a single tackle, skipping through the defense with as all the agility he’d demonstrated during his own opening try to set up Peachey for the final points of the evening. 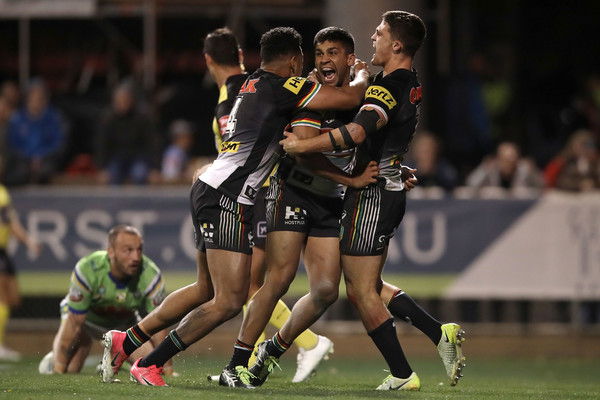 It was a terrific finish for all the Penrith fans from the other side of the mountains who had come out to see their team play on such a cold night – and for those last few minutes the roar of the crowd was suddenly as loud as anything to be heard at ANZ at Allianz. No doubt, too, the crowd reserved most of its enthusiasm for Moylan, who played a critical role in every try of the night. Surely this will cement his return to five-eighth, since he’s lead much more emphatically from the halves than he ever did from fullback, making me wonder what kind of magic he might muster when the Panthers take on the Cowboys in Townsville after the bye.