By this stage, it feels as if the Tigers’ 2017 season is pretty much over. Over the last six months, the team have lost – or been told they are going to lose – James Tedesco, Mitchell Moses, Aaron Woods, Ava Seumanufagai, Tim Grant, Jordan Rankin, Matt Ballin, Jamal Idris and Taniela Paseka. That’s close to a third of the team, along with nearly all the major playmakers, and while the Tigers may have signed a few new players (Moses Suli, Malakai Watene-Zelezniak, Tui Lolohea), ensured a few more for 2017 (Chris McQueen, Ben Matulino) and started to blood some of the young guns (Esan Marsters, Matt Eisenhuth), it’s hard to see the team really congealing again until they’ve put this disastrous season behind them. 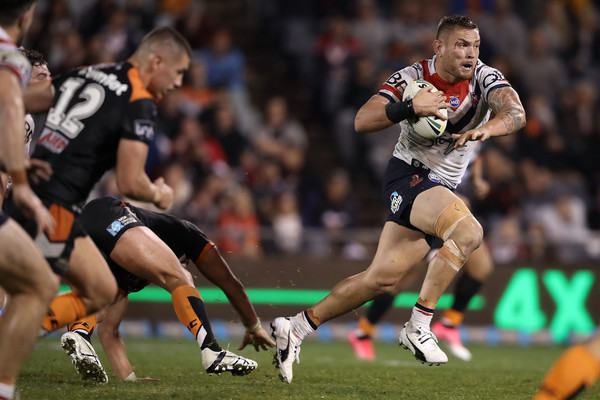 As a result, while the Tigers may not be consistently at the bottom of the ladder, they tend to feel like the bottom team, since even the Knights have been capable of some big efforts and displays of unity that just aren’t possible given the chaotic situation at Leichhardt at the moment. Without necessarily being defeatist, then, it’s hard to expect a sustained performance from the Tigers at this point in time, and their home game against the Roosters was a case in point, with the guests running the Tiges ragged for most of the eighty minutes to come away with decimating 40-18 scoreline at Campbelltown Stadium. 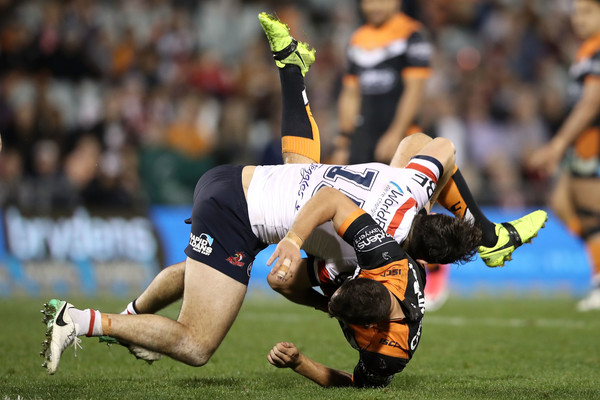 For the first half, the Tigers were actually alright, with Lolohea putting down the first points of the afternoon four minutes in, along with his first try in the orange and black jersey for his first home game. It came off the back of a deft pass from Elijah Taylor and some equally good footwork from Lolohea himself that saw him skirting through Jared Waerea-Hargreaves, Michael Gordon and Luke Keary. No doubt, it was a rousing start for the Tigers, and momentarily made me wonder whether they might replicate their first game of the season and manage to beat the Chooks for the first time with Tedesco on the field. 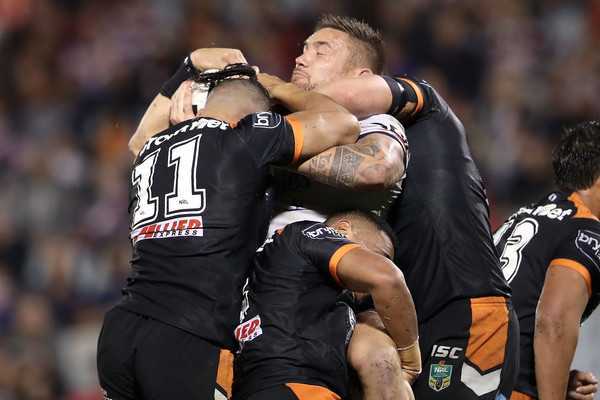 Fifteen minutes later Lolohea would have made it a double if he hadn’t been blocked by Gordon while chasing his own grubber to the line, after having already chipped it forward a couple of seconds earlier. If it didn’t turn out to be a pointscoring moment, it was certainly momentum-building, and shortly after Tedesco put down his first try since Round 1 this year, breaking the longest drought in his NRL career against his future club. It was a bittersweet moment for Tigers fans, even if it did make it feel like a victory might at least be conceivable against such a sterling Roosters side. 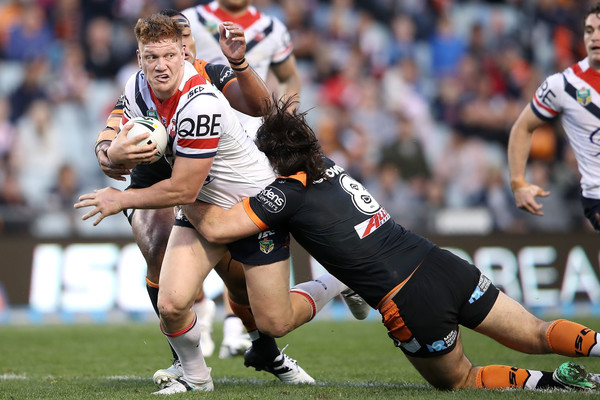 During these first thirty minutes, however, the Chooks had also been pretty busy, with Blake Ferguson putting down their first four points eight minutes in. For all the thrill of seeing Lolohea go over, the elegance and precision of this try signalled the Roosters’ supremacy from the outset, with a perfect kick from Mitchell Pearce finding a perfect catch from Ferguson, in a move they’d clearly practiced time and time again. So clinically was it executed that it was almost as if the Tigers weren’t there at all and the Roosters were simply holding their own private training session at Campbelltown Stadium. 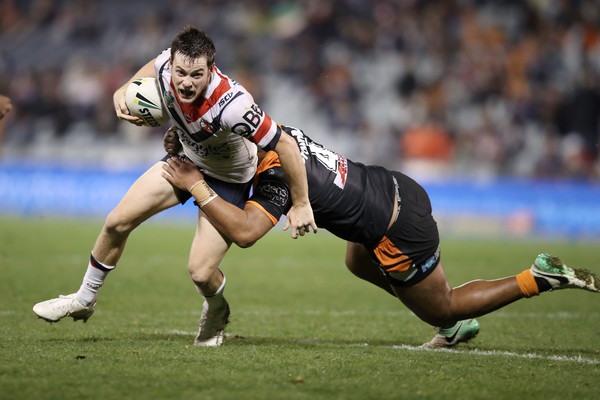 It would turn out to be the beginning of a cracking night for Ferguson, still shining from his Origin performance, who put in one of his best moves all year later in the game. After taking the ball halfway up the field, he was on the verge of being dragged into touch by Naqiama only to lob the ball over to Joseph Manu within microseconds of hitting the turf. Few wingers are able to navigate those few centimeters and seconds on the cusp of touch like Ferguson, and it was almost as if he had scored a try, so abruptly did it disrupt the Tigers’ plans.

Following on from the restart from Fergo’s try, Conor Watson went over again, after David Nofoaluma tapped the ball backwards halfway up the field for the Chooks to receive six again. As it turned out, however, they didn’t need six, with Latrell Mitchell finding open space and then sending the ball across to Watson to put a pin in the Tigers’ opening momentum. It was the beginning of an uncharacteristically messy night from Nofoaluma, who failed to clean up the high ball from Keary twenty minutes in and then coughed up the Steeden again in the wake of Mitchell Pearce’s magnificent try at the one hour mark. 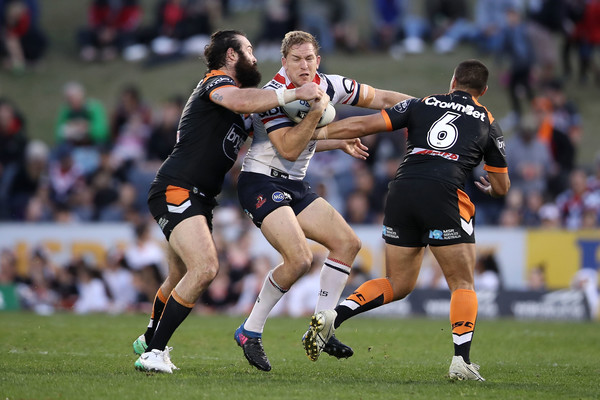 Given how dominant Nofoaluma can be at Campbelltown Stadium, his performance was in itself a bit deflating for the Tigers, since he’s one of the most reliable players on the team. At the same time, even reliability has to rely upon a strong sense of team unity, and it may be that the Tigers, as they currently stand, have just become too disparate and disillusioned for even Nofoaluma to be able to synergise them on the field. However you read it, his performance is often a good litmus test for the health of the team as a whole, so his uncharacteristically messy form on Sunday had warning signs written all over it. 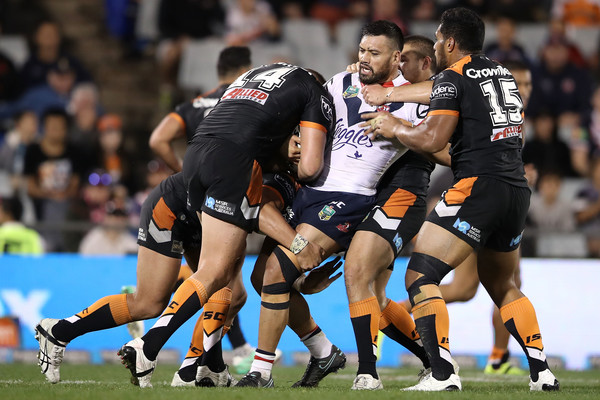 Just before the half hour mark, the Chooks went over again, following a great pass from Pearce to Keary, who in turn ran right up to the Tigers’ defensive line, clearing up a bit of space for Aiden Guerra to crash over. In fact, so close did Keary leave it that Guerra fumbled the ball but managed to regain possession, thanks in part to the focus of Keary’s short pass. Burning through the Tigers’ defence, not even Tedesco was able to keep Guerra from crossing over, in a brilliant four-pointer that was nevertheless a bit bittersweet for Chooks’ supporters on the back of reports of Guerra moving to the Knights next season.

With Tedesco making up for his defence by going over several minutes later, the score remained at 12-16 heading into the sheds. However, any residual sense that the Tigers might be in with a chance was quashed shortly into the second stanza, with Pearce going over for a try four minutes in, and then going over once again for the fifth Roosters try – and the best try of the game – about ten minutes later. 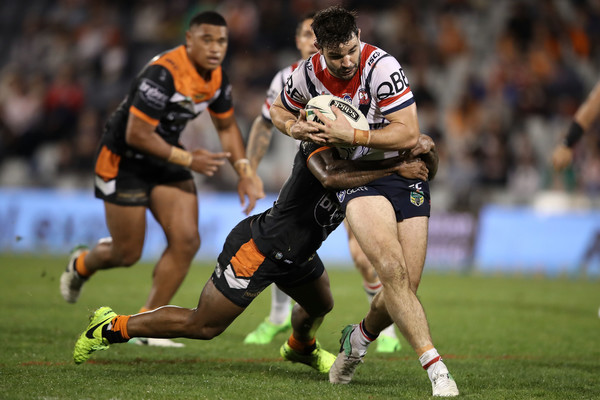 In an extraordinary sequence, Keary moved the ball rapidly up the left side of the field, only for Mitchell to find open space and run it about thirty metres before kicking it over to the in-goal area at high speed, in a play that was reminiscent of Jordan Rapan’s incredible kick on the run to Blake Austin against the Tigers earlier in the year. Despite the déjà vu, however, the Tiges didn’t scoot forward to clean up the ball – whether because they couldn’t reach it in time, whether because they thought the Chooks couldn’t reach it in time, or whether because they thought the Steeden would find touch, is anybody’s guess. 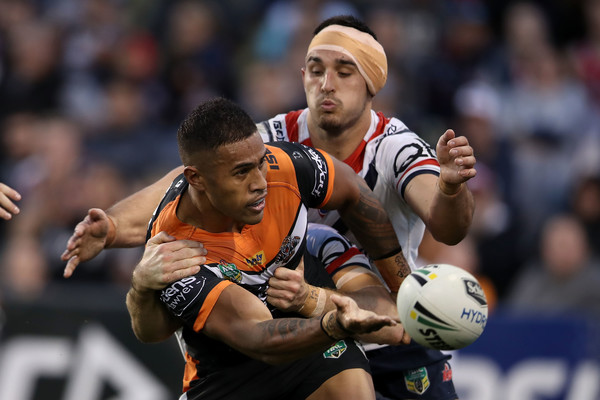 As it turned out, however, Mitchell’s kick was perfectly placed, standing up and slowing down just shy of the line, as Pearce put in the most blistering run of the game – a run that still looked fast in slow-motion – to leap up from behind and ground the ball miliseconds before it went into touch. When they say a player crashes over, this is what they mean, as Pearce narrowly missed lurching through the sideline fence, in a memorable sequel to Naiqama’s mad grounding in the first half, which had seen him plough into the midst of the onfield Tigers cheer squad while trying to keep the Steeden out of play. 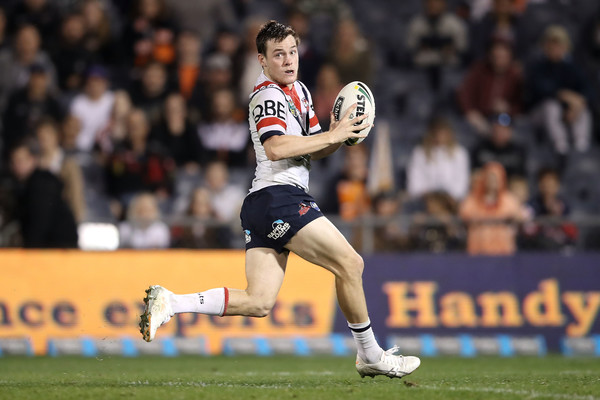 It was a testament to the brilliant form that Pearce has brought to the Roosters this year, along with Keary’s ongoing evolution as a player, showcased on Sunday by his move to dummy half after the Chooks lost Jake Friend to a HIA. The Roosters weren’t done yet, however, with both Guerra and Watson managing to make it a double – Guerra at the sixty-third minute, after scooting between Littlejohn and Suli; and Watson at the sixty-ninth minute, after a great run from JWH combined with brutal fend on Elijah Taylor.

It’s hard to know whether Sausao Sue’s four-pointer five minutes out from the end could even be called a consolation try, so dominant were the Roosters, but at least the Tigers managed to have the last word. To be fair, too, it culminated a pretty impressive set from the hosts that included Naiqama making a spirited effort to knock the ball back into the field of the play after the Roosters defenders surged him over the line. If nothing else, it was also nice to see one of the Tigers’ big men crashing over after Ava Seumanufagai had almost put down four points a couple of sets before.

Still, it was another disappointing match for the Tigers, and one that they’ll be anxious to remedy in the coming weeks, especially once they have Tedesco and Woods back from Origin. As far as the Roosters are concerned, they performance was probably a bit more error-prone than they would have liked – especially in the opening minutes of the second stanza – and that’s something they’ll presumably be looking to remedy when they take on the Storm at home after the bye, in what should be one of the key match-ups of the next couple of weeks.