The Warriors have come away with a rousing win over the Bulldogs after a foggy game in Auckland on Friday night. With Kieran Foran and Solomone Kata out, Josh Reynolds back in, and Josh Jackson and David Klemmer returning to the front row two nights after Origin, this was always going to be a more dynamic game than statistics might suggest. Sure enough, momentum swayed, with the Dogs seeming to dominate at the start, only for the Warriors to regain control before and after half time. From there, New Zealand seemed to have hit a sweet spot, but Canterbury-Bankstown managed to make good in the last ten minutes, and would have stood a good chance of winning with just five minutes more on the park. 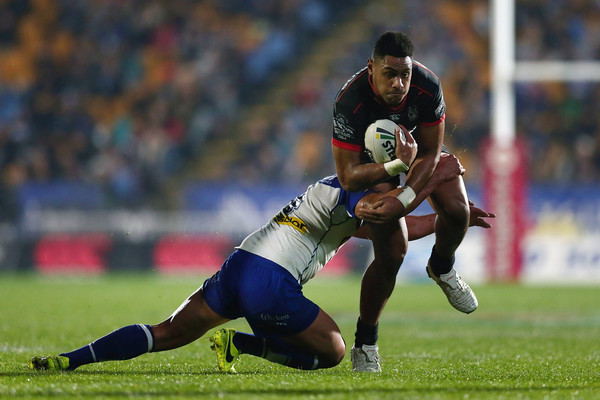 The first twenty minutes, in particular, dished up some of the best Bulldogs defence in weeks – pretty incredible when you consider that Klemmer and Jackson were wearing lighter blue jerseys a mere forty-eight hours before. Of course, they may have still been high from the adrenalin of Origin, since they were both clearly amped up over the course of the game, especially Jackson, who played right on as if he was still wearing a Blues jersey.

It wasn’t just Klemmer and Jackson who were galvanising in defence, however, with multiple players dashing in to hold up Charnze Nicoll-Klokstad when he pummelled over the line for what initially looked like the first try of the night. Minutes later, Morris dragged the young winger into touch as he was making his way back to the line and, from thereon, it made sense for Canterbury-Bankstown to target Nicoll-Klokstad. It didn’t hurt, either that he brought home the first of two unforced Warriors efforts in the first fifteen minutes, knocking on under the pressure of Moses Mbye’s high ball. With Ben Matulino knocking on halfway up the field shortly after, it seemed as if the Warriors might be having one of those nights that makes them so mercurial, inconsistent and downright frustrating as a team. 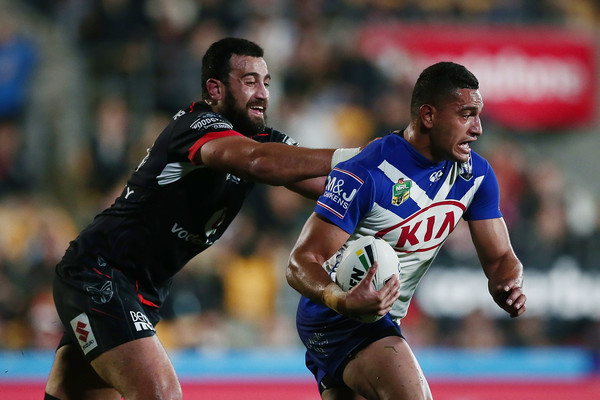 It was a stirring moment, then, when Ken Maumalo put down the first four points of the game at the fifteen minute mark. By all acccounts, this shouldn’t have happened – the Dogs’ defence had been stellar up until this point and they really deserved the opening try. Nevertheless, Maumalo managed to break through Josh Reynolds and Marcelo Montoya, ploughing through Reynolds for a second time before eluding Will Hopoate right on the line. A miracle of footwork, speed and dexterity, it broke the game wide open for the Warriors and proved to them that they could muster their forces if they really committed.

While they wouldn’t score again in the first stanza – neither side would – the sheer surprise of Maumalo’s mad dash led to a terrific crescendo from New Zealand as the siren approached. Shortly before half time, Nathaniel Roache ran right through Sam Kasiano and Aiden Tolman before gifting a perfect offload to Shaun Johnson, only for Josh Jackson – who else? – to bring the sprinting halfback down at the last minute. While it didn’t result in a try, both Roache and Johnson came so close to repeating Mamalo’s miracle run that it kept the adrenalin alive. 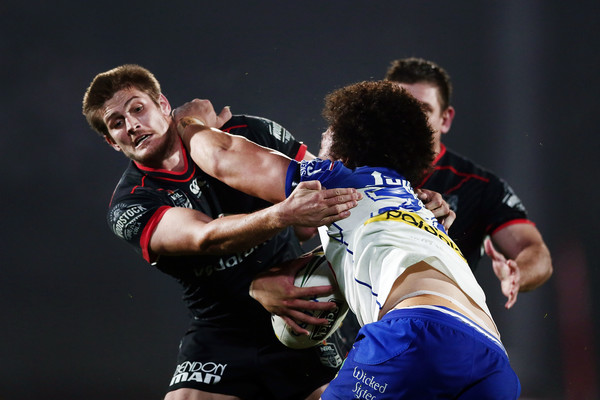 At the same time, Jackson was sent off for two minutes for holding Johnson down for too long, leaving the Dogs to face the prospect of playing a twelve-man side for the first ten minutes of the second act. On the brink of half time, that would have been more than enough to give the Warriors the advantage, but New Zealand also made good on the resultant penalty, with Johnson kicking the Steeden straight through the goal posts to bring his team to a 8-2 lead as the siren sounded.

With Blake Ayshford putting down the second try for the Warriors two minutes into the second stanza, New Zealand were coming into their own, not least because Johnson set Ayshford up with one of the deftest grubbers of the night. When Johnson is firing consistently, it seems to prompt the Warriors to achieve their best as well, and witnessing his dexterity with the boot both before and after half time was as critical to the team’s focus and conviction as the freaky spectacle of Maumalo’s opening try.

Ten minutes in, however, things seemed to reach a bit of a turning-point, as the Dogs finally glimpsed some decent field position on the back of a knock-on from David Fusitua. With Jackson back on the field and an extra penalty to boot, it seemed as if they had to score, only for Klemmer to lose a particularly slippery ball in what initially looked a bit like a three-on-one strip but was ruled a loose carry. 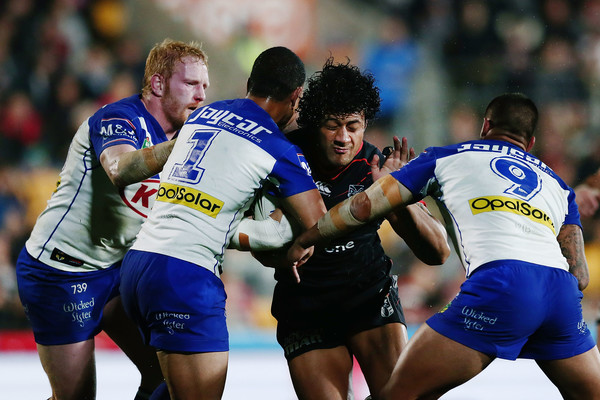 Nevertheless, the Dogs were gifted an almost identical scenario a few minutes later, except that this time the Canterbury scrum came off the back of a messy pass from Ata Hingano that skittered into touch. Once again Canterbury got some field position, and once again it was bolstered by a penalty, but this time Raymond Faitala-Mariner managed to get across for a try that was all the more cathartic for the botched attempt that had preceded it.

It was also one of the best tackle evasions of the season on its own terms, as Faitala-Marina slammed into a tackle about ten metres out from the line only to somehow get out of it just before it came to completion. From there, he skipped and jumped ahead to plant the ball on the ground, in a try that was almost as astonishing – in its own way – as Maumalo’s, and put extra pressure on the Warriors to deliver something special. 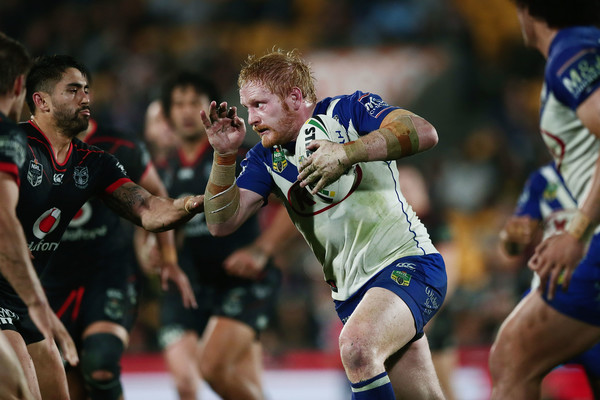 It may have taken them until the 73rd minute but they managed it, with Roger Tuivasa-Sheck putting down four points straight out of dummy half as if to show Faitala-Mariner how to really make an elegant dash at the line. Only a few metres out, he made as if to pass but instead plunged forward through Graham and Faitala-Mariner himself, coming to ground just short of the line but relying on the slipperiness of the pitch to propel him forward and ground the Steeden in the midst of the tackle. 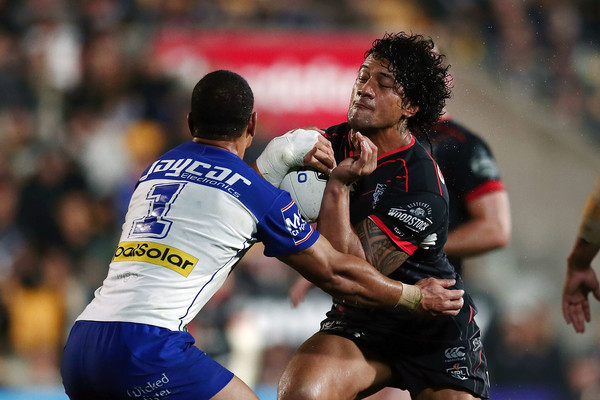 If there had been a few more seconds or centimetres in it, he might have found himself stuck with a double movement, but with onfield ruling of try, the bunker were content for it to go through. The result was all the more cathartic for New Zealand in that their previous two try attempts – each of which had been pretty spectacular and each of which had seemed to definitively offer them the game – had been disallowed upon further video inspection.

Things weren’t quite over, though, with Kerrod Holland bringing home a terrific consolation try two minutes out from the end, off the back of a great cut-out pass from Mbye. While it showcased great timing from Holland, who managed to ground the Steeden in the corner miliseconds before his left arm found touch, it also capped off a really solid night for Mbye as well, who put in one of his best kicking games all year.

So plosive was Mbye and Holland’s final gesture, in fact, that it probably wouldn’t have been a consolation try had Johnson not managed to slot in a field goal at the 68 minute mark. With the hosts seven points ahead, though, there was no way that the Dogs were going to be able to come from behind with two minutes to spare, and they played as if they knew it, failing to muster the adrenalin and ingenuity that had characterised their game at its best. It was a fitting end to a Warriors effort that had depended in large part on Johnson’s organisational acumen, and let’s hope we see the same focus, diligence and resilience when New Zealand take on the Sea Eagles at Lottoland next week.