The Cowboys have won without Johnathan Thurston in a nail-biting finish at 1300SMILES Stadium after an early Penrith surge made it look as if the visitors might come away with the victory. Given that the Panthers are currently the best defensive team in the competition, it was always going to be difficult for North Queensland to put down points without JT, and as it was the Cows went into the sheds at half time smarting under a 6-0 advantage to Penrith. 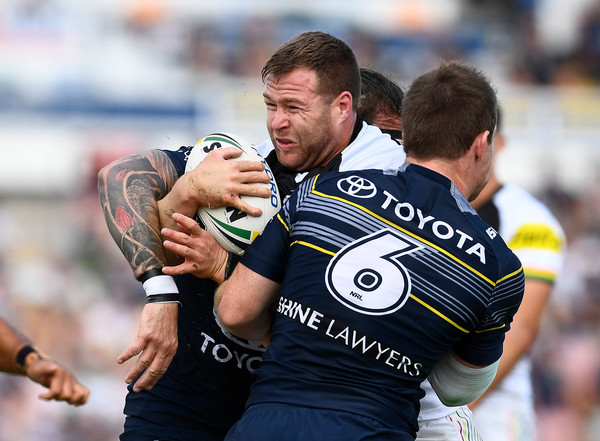 To make matters worse, they had to rearrange their interchange structure after Jake Granville opted not to go off for a HIA assessment following an early tackle on Matt Moylan. Several sets later, his gaping cheek laceration hadn’t got any better, and so the ref ruled him off for some stitches, but by this stage it had to be counted as part of the formal interchange, forcing Queensland to reshuffle their options in the face of an apparently unbreakable Penrith defensive line.

Speaking of Matty Moylan, Saturday afternoon’s game was yet another emphatic argument for his shift from fullback to five-eighth. While his clash with Granville may have momentarily throw his defensive instincts, he was all over the park for the rest of the game, continually scheming and strategising on behalf of his team, and leading better from the halves than he ever has from the back. Few other players would have the nerve to call the ball from Jason Taumalolo ten minutes out from the end, but Moylan pulled it off, in the softest turnover and one of the best single stealth moves of the 2017 season.

Not surprisingly, Moylan played a critical role in the first Panthers try, which came at the ninth minute – the only points put down in the first stanza. It came off the back of the best Penrith set of the after thus far, with Waqa Blake breaking through the line and getting on the outside of Kane Linnett before being taken down by Gavin Cooper thirty metres out, although not without gaining a penalty for his team in the process. 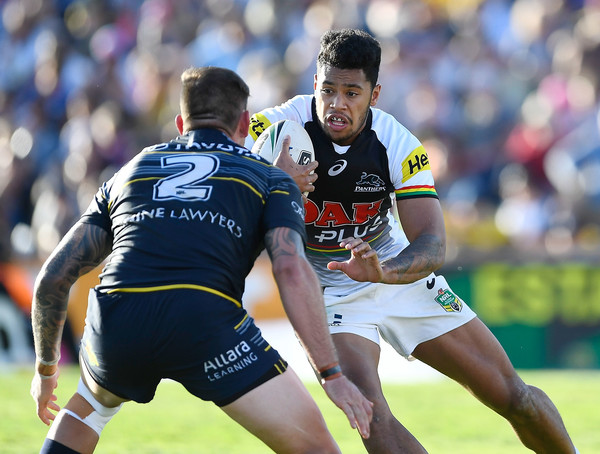 From there, Trent Merrin charged at the line before sending the ball back to Mitch Rein, who got it over to Moylan, through Cleary, in turn. If Moylan’s focus had seemed to wave in the wake of Granville’s hit, he made good now by running right up to the line for a brilliantly timed inside pass to Corey Harawira-Naera, who managed to crash over without a single Cowboy laying a hand on him, for his third try in as many games.

Those four points – six, after Cleary converted – remained unanswered over the first stanza, despite North Queensland receiving some golden opportunities. Half an hour in the Cows received two successive penalties and glimpsed some great field position, only for Coen Hess to cough up the ball and return possession to Penrith. It was a pretty relieving moment for the mountain men, given that a third penalty for North Queensland would likely have resulted in a formal warning.

Several minutes later, however, the Cowboys got another penalty and some equally promising field position, but this just prompted Penrith to up their defense, especially towards the end of the set. On the fourth tackle, Harawira-Naera shut down Hess right on the line, while a handful of Panthers players managed to scoop up the fifth tackle seconds after the play-the-ball, forcing an instantaneous changeover, in what would turn out to be the last real opportunity for North Queensland to put down points before half time. 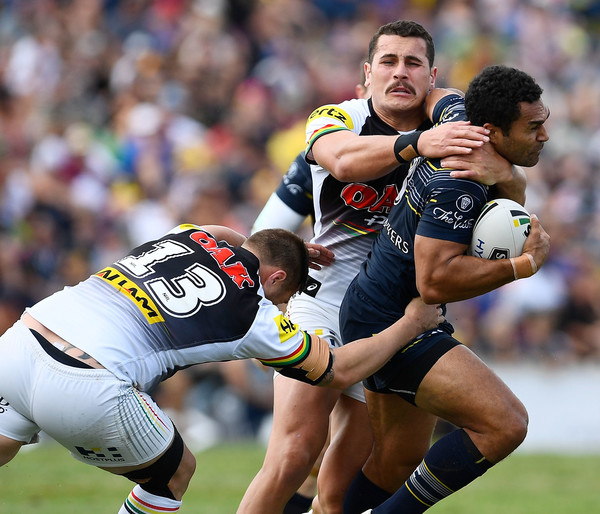 When the Cowboys returned from the sheds, it was with a new level of grinding determination, yet this only stimulated an even more extraordinary display of goal line defence from Penrith, who spent the first ten minutes right on their line. As North Queensland clocked up a series of penalties – some deserved, some lucky – Penrith dug in, refusing to let the Cows build too much momentum from their renewed field position.

Finally, fifty-seven minutes in, Corey Jensen managed to cross over for his first NRL try, off the back of a Michael Morgan offload. He came to ground just shy of the line but managed to slide forward with just enough momentum to avoid collapsing into a double movement. With Lowe kicking the Steeden square between the posts, the Cows levelled the score for a 6-6 game, and seemed to have gained an edge for the first time, as Dylan Edwards knocked on minutes later, setting up North Queensland for the first penalty goal of the night.

For the last twenty minutes, it was a mad scramble for points, and the Panthers were next to go over, with Nathan Cleary putting down a try at the sixty-seventh minute that left a fair few commentators scratching their heads. In a couple of rounds when the distinction between double movement and natural momentum has been repeatedly called into question, this was one of the closest, with Cleary – just – managing to maintain possession and channel his own momentum into one of the most fleeting and evasive tries of the season.

While it might have prompted some pretty strong words from Gavin Cooper, it was a dazzling vision of grace under pressure, and yet another prodigious display of creativity from Penrith’s most promising young gun. To respond, the Cowboys had to effect yet another dramatic shift in momentum, and they succeeded eight minutes out from the end, with a couple of big men managing to drag Dallin Watene-Zelezniak back into touch a tackle after the Panthers had cleaned up the North Queensland high ball.

A couple of tackles into the next set, the Cows once again received a penalty for a Penrith hand in the ruck and then another, two tackles later, for an illegal strip. Even without Thurston, they had to find a way to pull out something special on the subsequent set, and so they did, with Kyle Feldt jumping a whole foot above Josh Mansour to catch the Steeden on the full. From there he pivoted around perfectly on one foot to ground it so gently that it was almost a soft try, before tumbling over into touch.

So astonishing was the brute strength and balletic dexterity of Feldt’s move – and so reminiscent of his role in the 2015 grand final – that it seemed to all but guarantee North Queensland the game, not least because of how emphatically it affirmed the capacity of the team to construct magnificent set pieces without JT around to orchestrate them. Once Lowe added the extras from the hardest angle of the afternoon – staring into a blazing tropical sun – the Cowboys finally took the lead with three minutes to go.

You couldn’t rule out the Panthers though, so it was a nail-biting finish as the mountain men wrangled possession out of the restart and found themselves with a whole minute to make good. As fate would have it, they couldn’t quite manage to put the ball over the line, making for one of their most heartbreaking loss of the season. Still, it was a proud loss, and there’s no doubt that they’ll be aiming to make the most of their stirring momentum – so similar to their finals form last year – as they front up against the Bunnies at ANZ next week.