The Sea Eagles have come away from Shark Park with a rousing win over last year’s premiers, leaving the home crowd groaning as Daly Cherry-Evans put down his most decisive Origin case yet. Despite an early try from Curtis Sironen, it initially looked as if the game might go either way, with both teams offering up one of the most error-prone opening quarters in some time. With one knock and and changeover after another, you’d have thought we were watching a rainy night game, rather than dry conditions on a golden afternoon at Wooloware, with only a slight southerly disturbing the serene atmosphere.

Similarly, with both sides struggling to gain momentum after apparently endless penalties and slow play-the-balls, it initially looked to be quite a low-scoring game. At the moment Cronulla are at the bottom of the ladder in terms of their discipline in completions, and that showed over the first twenty minutes, where they barely finished half of their sets without being interrupted by an error or stoppage of play, resulting in possibly the most dispiriting first stanza of football all year from Cronulla, especially for a home game.

On the other side of the Steeden, the Sea Eagles were coming back fully refreshed after sixteen days off the park, and without having sacrificed any of their players to Origin. Fully charged and ready to roll, they injected an intensity from the outset that saw Brenton Lawrence and Andrew Fifita almost turning the first scrum, at the sixth minute, into a full-out fracas, before their teammates quickly calmed them down. With Sironen going over two minutes in off a great short ball from DCE that Maloney failed to contain, it was clear that Manly were going to try to beat the odds and come back from the bye with a bang. 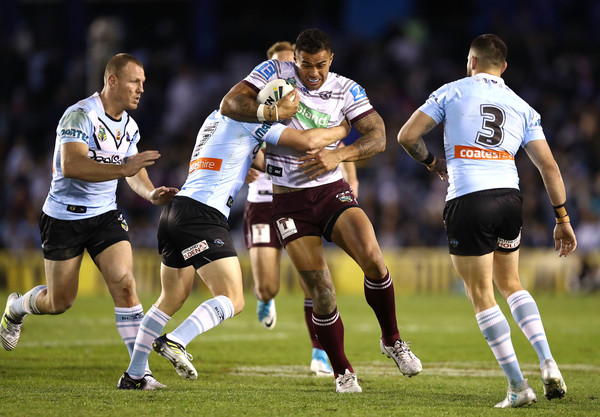 As it turned out, however, this first four-pointer didn’t necessarily produce the momentum that Manly were after, with Sironen knocking on during the subsequent set and coughing up the Steeden once again five minutes later, just as the Sea Eagles were starting to glimpse some good field position. Nevertheless, the visitors would be the next to score, as Matthew Wright went over at the nineteenth minute, off the back of a great pass from Tom Trbojevic.

Slamming the Steeden to the ground milliseconds before it came loose – the slow-motion replay showed it just starting to leave his hand – Wright nevertheless managed to exert just enough downward force to satisfy the bunker. It was a particularly empowering moment for Manly, not least because it justified their decision to opt for a quick tap instead of taking the two off the back of the penalty that set it all up in the first place.

It was doubly heartening for Manly given the loss of Jorge Taufua for the remainder of the season – the only part of this Brookvale lineup that has really changed since the beginning of the year – and while Wright may not be operating at Taufua’s level, it’s clear that he’s already an asset with the boot. In a spectacular conversion, he gracefully accommodated the slightly southerly to kick the ball through the posts from the most difficult angle of the afternoon, taking a fair bit of goalkicking pressure off Dylan Walker in the process. 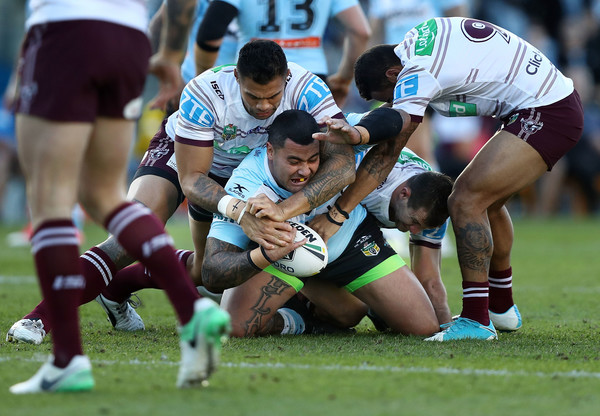 Several minutes later, Sironen went over again, off the back of the subsequent kickoff, as the ball travelled the entire length of the field, moving its way through DCE and Tom Trbojevic before finding its way to Sironen once again. Where DCE had been largely responsible for the first four-pointer, Sironen made his mark here, maintaining possession and momentum through an extended tackle from Valentine Holmes without ever going to ground until he was over the line. There wasn’t even that much of a twist-and-spin to it – just a hit-up that continued until Sironen managed to crash over, in a brilliant combination of patience and strength that signalled the very nadir of the game for Cronulla, who had been unable to muster even a single tackle between tries. 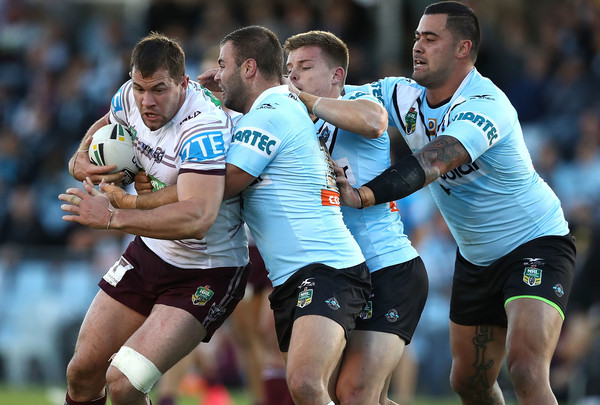 It was clear that Cronulla needed to bring something special to the table, and sure enough Luke Lewis scored the first try for the Sharks at the half hour mark – exactly the kind of try that the hosts needed to regain some face at this point in the game. For one thing, it was the most spectacular and emphatic four-pointer thus far, as Lewis intercepted the ball and ran two-thirds of the length of the field to plant it right beneath the posts, with DCE and Akuila Uate almost catching up with him but falling short at the last second. 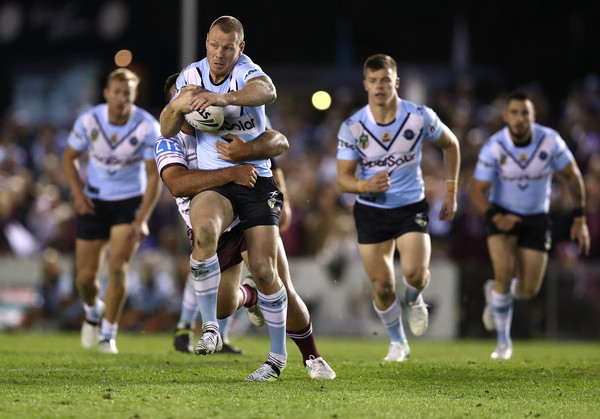 At the same time, Lewis’ intercept went some way towards demystifying DCE’s incredible form so far, with the 2016 grand final man of the match seizing onto a beautiful pass from the Manly halfback to his five-eighth. On top of all that, the fact that Cronulla’s key veteran was able to hold his own was clearly a galvanising spectacle for the team and fans and, despite the fact that the Sea Eagles were still comfortably ahead at 18-6, it felt as if this might well turn out to be a definitive turning-point for the Sharks.

Four minutes later, Sosaia Feki put down the next try, which was as spectacular, in its own way, as Lewis’ mad dash. It came after Cronulla got a penalty right on the Manly line and Maloney chose to kick sideways for touch, a move that initially seemed counter-intuitive, since it didn’t gain the Sharks any additional field position, but which found dividends a couple of seconds later when the hosts rapidly shifted play to the left and managed to put Feki over. It’s no secret that Maloney is one of the smartest players in the competition, and this moment of brilliant intelligence compounded Lewis’ moment of brilliant agility to make it feel as if the Sharks were almost ahead, especially with the crowd at Woolooware behind them, although DCE would have the last laugh with a field goal right on the first siren.

Things slowed down a bit after half time, as the Sharks ground in, and neither team was able to make good on their respective momentum. Eleven minutes in, however, Jack Bird dropped the ball and turned over possession, during which Manly managed to secure themselves a goal-line dropout. It was during the subsequent set that DCE put in his most astounding move, evincing an almost superhuman peripheral vision to glimpse that Wright was unmarked, and then lobbing the Steeden three positions over to bypass the entire Cronulla right wing defence to put Wright over the line for the second time in the game.

It was a dire moment for the Sharks, especially since Jayden Brailey, who had been recently taken off with a lip injury, was announced to be on his way to hospital with a suspected broken jaw, seconds after Wright once again sent the Steeden through the posts. As Daniel Mortimer ran onto the field for the second time this year – his last appearance before heading off for the Centurions – Cronulla gathered the wagons, but it wasn’t enough to prevent Blake Green going over ten minutes later. 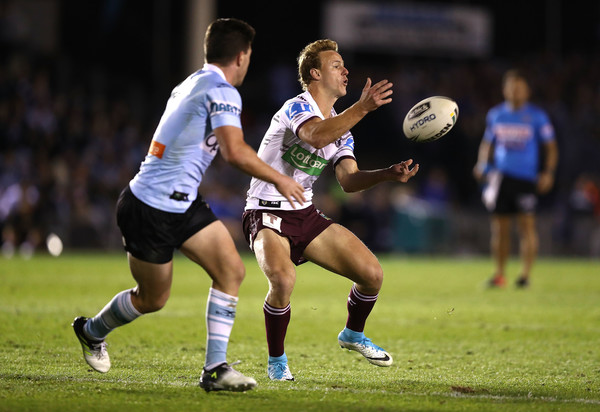 Fifteen metres out from the line, Green made as if to kick, but instead ran through three defenders, including Gallen, to smash the Steeden to earth. It was a daring demand to be taken as seriously as DCE, and an emphatic insistence that this is no lopsided halves pairing. Ten metres later again, Wade Graham would respond with his own consolation try, and while it might have come off the back of a nice pass from Maloney – which bypassed DCE for about the only time in the afternoon – it was still a bit anticlimactic given how much time had passed since Cronulla’s magnificent first two tries in the opening stanza. 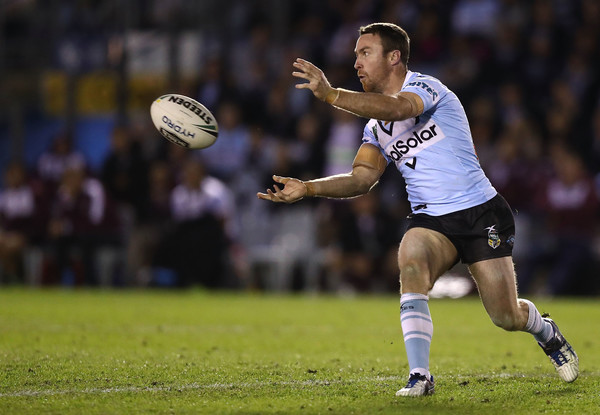 Instead, Dylan Walker had the last word two minutes out from the end, scooping up the high ball after Feki failed to contain it. From there, he pivoted, skewered and skidded about four or five times, weaving his way through – or around – Maloney, Feki, Leutele, Holmes and Fifita before finally going over, in the single most freakishly dexterous try of Round 16. Even in slow motion, it looked more like ice skating than football, as Walker skidded right to the brink of falling – most of the defenders slipped over at once point or another – but somehow managed to remain upright to add the icing to a near-perfect game from the Sea Eagles.

In fact, so good were Manly that it was almost like watching a match of Origin, with DCE, in particular, playing pre-emptively in Origin mode with a clear eye to Kevin Walters’ selection announcement in the lead up to the third game. Whether or not he’s selected, however, you can be sure that Manly will be absolutely raring to make good on their incredible performance when they take on the Warriors at home next week, while the Sharks will be looking to resume their finals surge against the Roosters at ANZ.