The Bunnies have come away with a rousing 42-14 win over the Panthers at ANZ after an early 8-0 lead from the visitors made it look as if Penrith might be set to regain some momentum after last week’s heartbreaking loss to North Queensland. After scoring in the opening minutes, however, the Panthers would be held tryless until the dying seconds of the game, when Josh Mansour would cross over for what would barely qualify as a consolation try. 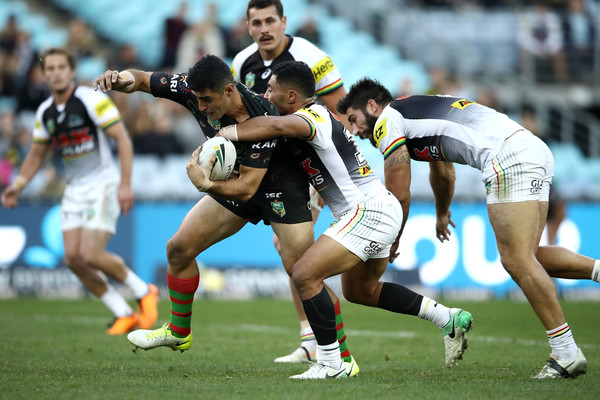 Between those bookends, the Rabbitohs managed to put down seven tries, five of which came from Alex Johnston, who would have made South Sydney history if he’d managed another four-pointer. If last week’s game hadn’t been enough to convince you that Johnston was thriving on the wing, then Sunday’s match was the clincher, with the ex-fullback putting down his best performance of the year. It did’t hurt, either, that Adam Reynolds also put in his best game of the year as well, consistently hitting the mark with his fifth-tackle option and setting up his wingers for some of their deftest groundings of Round 17.

The result was all the more incredible in that this initially looked as if it might be Penrith’s gane, with the Riff putting down the first points with a penalty goal and then scoring off the back of an a twenty-metre inside pass from Dallin Watene-Zelezniak at high speed that found Moylan right on the chest, allowing him to crash over. Shortly after, a brilliant tackle from Sam Burgess DWZ turned into a full-out fracas that saw both players sent to the bin for ten minutes, in a bit of an unlucky decision for Burgess. With the penalty also going Penrith’s way, the Bunnies seemed to be galvanised by rage, which may very well be what won them the game, with Johnston scoring the first of his five tries on the subsequent set. 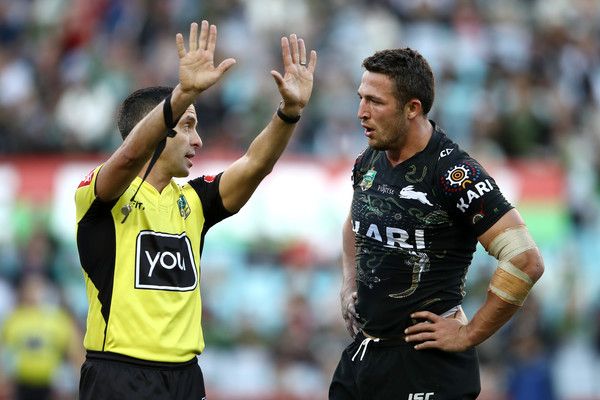 It came off the back of Moylan’s first real error of judgement – a cut-out pass that you could only assume was meant for Corey Harawira-Naera, since he was the nearest player, but looked more angled towards where DWZ would have been if he weren’t in the bin, as if Moylan were trying to conjure him back onto the field. All it took was for Johnston to intercept and then showcase his notorious speed to run the length of the field and plant the Steeden right beneath the posts, in what must have been an enormously cathartic moment for Souths supporters

Indeed, the opening of the game had proven so frustrating for the Bunnies that the comeback seemed to be doubly energising, with Braidon Burns crashing over several minutes later. Despite receiving a goal line dropout, the Rabbitohs had put in a fairly lacklustre set of six, only for Reynolds to redeem it with the first of a whole string off magnificently placed kicks over the course of the evening. 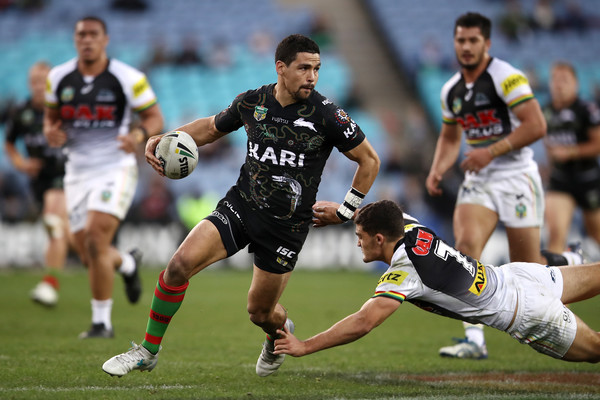 From there, Burns outdid Mansour under the high ball to plant the Steeden right under the corner, gifting Souths the winning margin that would balloon as the game ploughed on. It was a rough moment for Mansour, not just because of how precisely it replicated Kyle Feldt’s match-winning move last week, but because the goal line dropout had only occurred in the first place after Sauce had been unable to clean up a deceptively difficult grubber from Sam Burgess on the previous set. 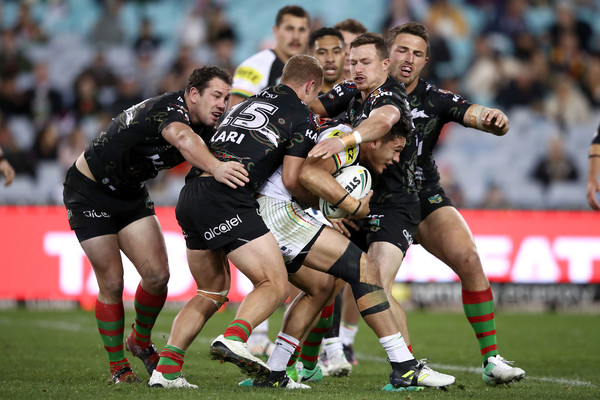 To make matters worse, Mansour hit back with a massive tackle on Burns five minutes out from the first siren only to be called offside, granting the Bunnies the penalty they needed for Johnston to crash over a second time. Once again, it came off the back of Reynolds’ boot, with John Sutton knocking the ball back to Johnston, who was unmarked, in a mirror image of Burns’ try a couple of minutes before.

As if we needed any more proof that the Bunnies wingers were on fire, Johnston brought home a third try off the restart, five minutes before the end of the second half. Still smarting from his ten minutes off the field, Burgess managed to dodge and weave his way around both Dean Whare and Nathan Cleary to offload to Dylan Walker, who in turn kicked it forward for Johnston to pick up and ground without skipping a beat. It was the kind of momentum you only see when a team has a grievance – something to prove – and it may just be that DWZ’s slap on Burgess was the biggest favour the Panthers could have given to the Bunnies in those opening minutes.

Johnston wasn’t done, however, putting in yet another try one minute into the second stanza, once again off a perfectly weighted kick from Reynolds after Burns was unable to get over on the right wing. Glimpsing a couple of unmarked players out on the opposite wing – incredible peripheral vision – Reynolds put in a terrific crossfield kick that found – who else – Sam Burgess. From there, Whare leapt in to spin Burgess around, but not without his target managing take advantage of the twist to offload to Johnston, who strolled over, incredulous that nobody appeared to be around to even try and defend the line.

It was the second try in a row that was set up by a Sam Burgess offload, so it felt only right that Slammin’ Sam put down his own four-pointer minutes later off the back of Reynolds’ boot, and following a line break from Reynolds that got the Bunnies to the Panthers’ line in the first place. Finally, Burgess got closure, as he outran Whare here as dexterously as he’d managed to spin and offload out of his tackle for the previous try.

All of a sudden, we were at that tipping-point at which it felt that rugby league history might be made. Sure enough, Johnston brought home his fifth try twenty minutes in, off the back of an incredible dart and pass from Damien Cook shortly after the interchange. If Reynolds, Walker and Burgess had been Johnston’s partners in crime before this point, his final four-pointer was a magnificent solo effort.

Burning up the left side of the field, he didn’t stray more than a couple of centimetres from the sideline, eluding both Whare and Dylan Edwards while also managing to stay just within the field of play. By the time he got to the try line there was ample to time to curve around and plant the Steeden beneath the posts, watching the incredulous faces of every player on the field until Sutton arrived first with his congratulations for becoming only the eighth player in South Sydney history to score a handful of tries in a single game.

From this point on, the game took on a different kind of suspense for Souths supporters, as everyone waited with bated breath to see if Johnston could go over a sixth time. While he may have come pretty close on a number of occasions – the whole Rabbitohs push seemed to suddenly converge on their left wing – the final points were put down by Mansour, thanks in part to a skidding, skittering grubber from Waqa Blake. 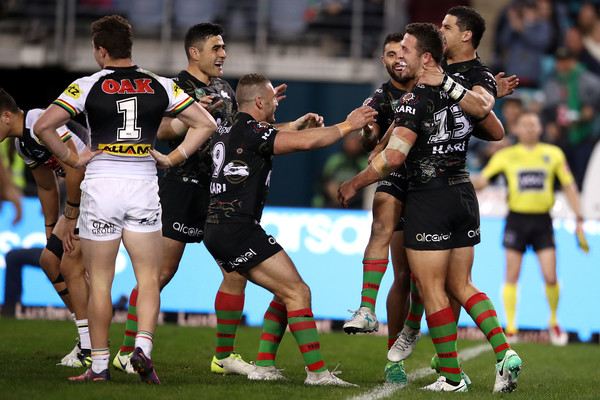 Two minutes out from the end, and in the face of 42-8 scoreline, it wasn’t much solace, but it was still heartening to see Mansour putting down points after a pretty rough opening half. For now, however, the Panthers are going to be keen to head back to the drawing board in preparation for Sea Eagles at Pepper Stadium, while the Bunnies have set themselves the challenge of building upon their most impressive performance of the year when they take on the Roosters at the beginning of Round 18.