The Roosters may have won their first encounter against the Rabbitohs this year, but they still came into their second match with something to prove, having suffered their most damaging loss of the 2017 season so far the week before, while the Bunnies had brought home their most emphatic victory against the Panthers. Add to that the absence of Blake Ferguson, Dylan Napa and Mitchell Pearce for Origin, compared to an unchanged Rabbitohs lineup from the week before, and the Roosters were at a distinct disadvantage both in terms of manpower and morale, although that sense of being the underdogs may have been what won them the game. 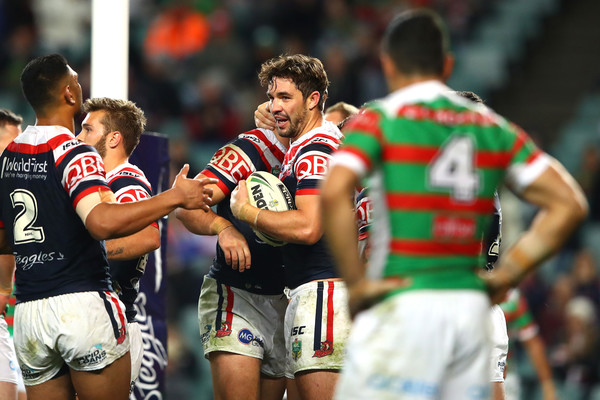 It was nearly a full twenty minutes before either side put down points, with both teams completing set after set and the pressure mounting as it became clear that whoever managed to break the deadlock first would have a pretty good handle on this first part of the night. Several times, the Roosters looked set to burst over the left corner, thanks to some deft footwork and running from Luke Keary, but to their credit, the Rabbitohs managed to contain these bursts, with Adam Reynolds, in particular, arranging the play well around his ex-halves partner, as well as putting in a massive tackle for one of his strongest openings in some weeks. 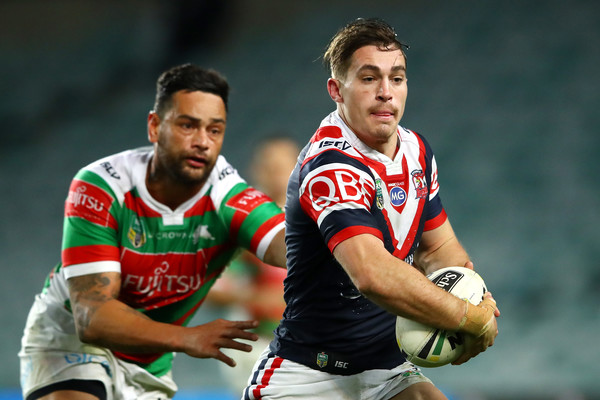 The deadlock was broken, however, with a spotty fifth-tackle kick from John Sutton, who skidded the ball into touch at the end of a stunning set, a situation all the more frustrating in that the South Sydney five-eighth had reprimanded Robbie Farah for not being in place for a comparable kick a few minutes before. With the Roosters getting a penalty for a long hold on Jared Waerea-Hargreaves at the beginning of the following set, momentum shifted in their favour, and they crossed over at the end of the subsequent set, thanks to a short kick right on the line from Jake Friend, who slammed through Sutton and Tyrell Fuiamano to ground the ball himself, but found that Joseph Manu had got there first, burning across from the side of the field right in front of Friend’s eyes, who had the best seat in the house for these opening four points. 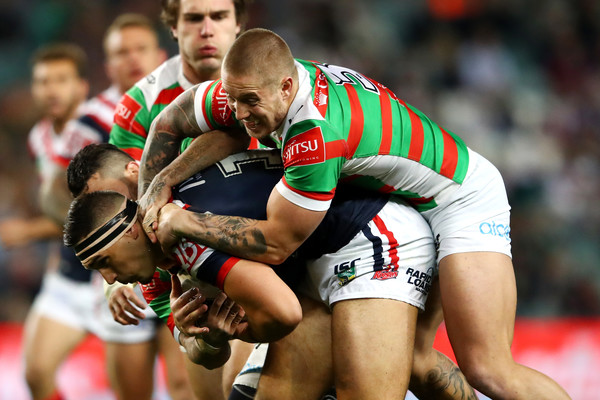 A few minutes later, a terrific bomb from Mitch Cornish disheveled the Rabbitohs defence, leading to some miscommunication between Cody Walker and Braidon Burns about who was going to clean it up. Taking advantage of their indecision, Michael Gordon sped forward to tackle his opposite fullback in the in-goal area, granting the Roosters the first goal-line dropout of the game so far. Once again, the Roosters got another penalty shortly after the Rabbitohs error, and this time they chose to take the two, with Gordon complementing his tackle with a clean kick that brought his team to a 8-0 lead, a pretty dispiriting start for an outfit that had won 42-14 over the Panthers the week before. 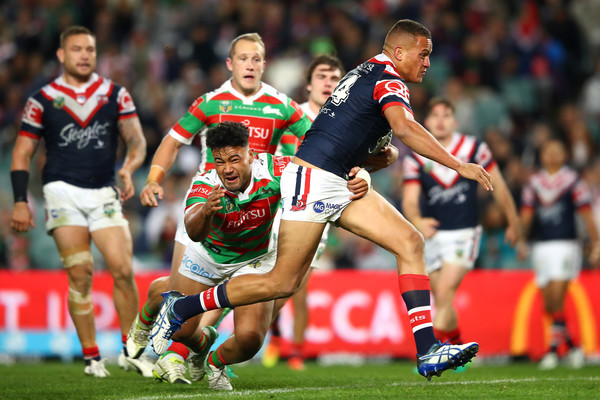 The second half ended with what initially looked to be a surge for the Bunnies, with Alex Johnston almost crashing across eight minutes out from the siren, and momentarily recapturing something of his incredible momentum against the Panthers from the previous week, only for Gordon to clean him up as effortlessly as he’d cleaned up Walker a couple of minutes before. Still, it was a great display of energy for the Rabbitohs, and things only got better a minute later when they received a penalty on the fifth tackle – a welcome reprieve for a game in which they were leading the penalty count 6-1 – and Reynolds put through a brilliant kick that took Mitch Aubusson a while to clean up in the in goal area, by which time Reynolds himself had slammed forward to trap the Roosters utility behind the line, with Angus Crichton only joining the tackle as a formality, so deadly was Reynolds’ determination at this particular moment. 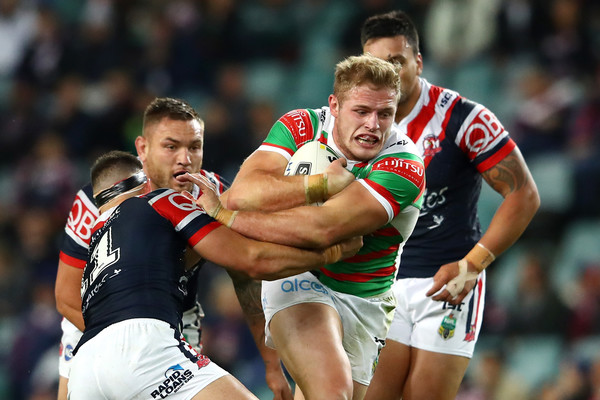 A strip on Jason Clark two tackles into the next set brought the Bunnies to 50% of the Roosters’ penalty count, with the referees not seeming to notice a sideways play-the-ball from George Burgess that could have easily undone it all. From there, South Sydney put in one of their fastest and deftest sets of the night, culminating with a pass from Farah to Sam Burgess, and then back again to Farah, that initially looked to have turned the Roosters around sufficiently for Farah’s cut-out pass to Johnston to result in points. Unfortunately, Farah’s pass wasn’t quite deep enough, clipping Bryson Goodwin on the way over, and producing a knock-on instead of four points, with the big centre unable to either catch and pass the ball or properly cut himself out of the field of play, in the single most frustrating moment of the night for the Rabbitohs so far. 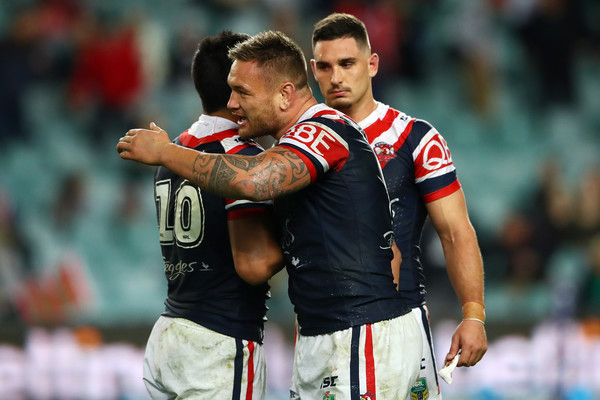 It was all the more cathartic, then, when Reynolds intercepted Keary and ran half the length of the field, only to be brought down by Cornish and lose the ball in the midst of the tackle. Given Reynolds’ strength and versatility over the course of the past forty minutes, it didn’t seem right that he would just cough up the Steeden, especially on the back of such an impressive run, and sure enough the replay showed that this easily could have been a penalty on Cornish, who held on overlong in the tackle, and got a hand to the ball himself shortly before Reynolds lost hold of it. 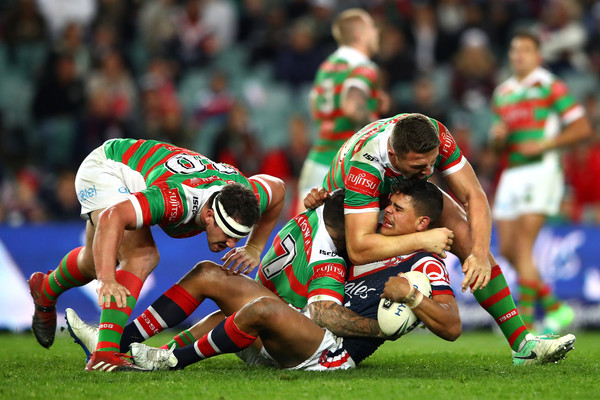 That just made it all the more frustrating, however, for the Bunnies to head into the break with no points on the board, especially after such an impressive game last week, although to their credit the Roosters scoreline could have been much higher as well, and had only been confined to a single try and penalty goal thanks to some fairly robust defence from the visitors. Still, Souths managed to respond ten minutes into the second half, on the back of some escalating field position and possession, as well as the fact that the Roosters didn’t manage to consolidate their lead in these opening ten minutes either, which surely gave the visitors some confidence. 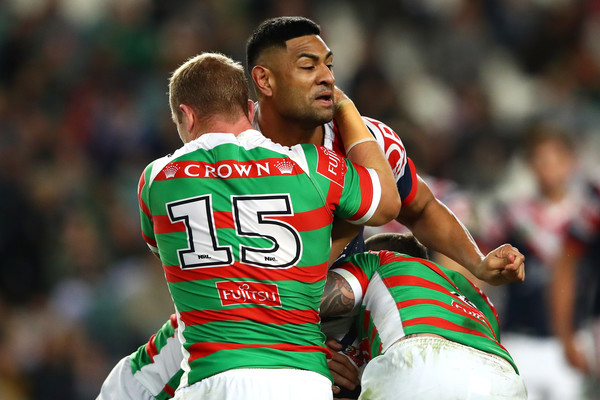 No surprise, then, that the team went wild when Farah managed to provide a move that more than mirrored Friend’s short-range option earlier in the game, finding himself with the play-the-ball five metres out from the line only to bend his head down and burrow through Friend and Gordon to slam the Steeden over the chalk. At first, in fact, it looked as if Farah hadn’t managed to get the ball to ground, but Bunker footage showed that he’d fumbled and then regained the Steeden, retaining just the slightest touch of possession – the tips of his fingers – before regathering it to put down the first four points of the night for the Rabbitohs. 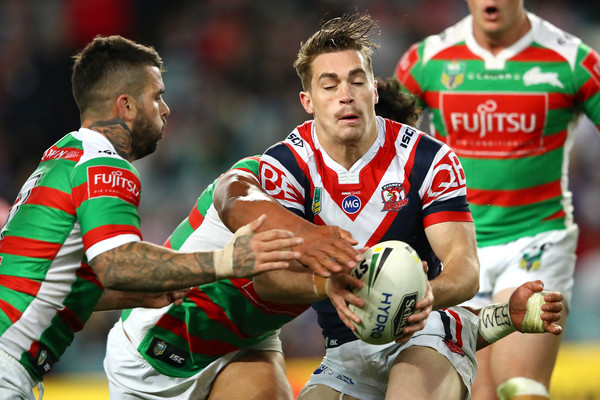 With Reynolds kicking the ball seamlessly through the posts, we were back to a two-point game, with Reynolds’ 40/20 a couple of minutes later suggesting that the Bunnies might be set to score again, only for Sam Burgess to cough the ball up on the first tackle. With that sudden rupture of momentum, the Roosters didn’t have to wait long to regain their eight-point lead, with Friend putting in yet another big play and showcasing just how well he can step up in the absence of Sydney City’s key playmakers for Origin. 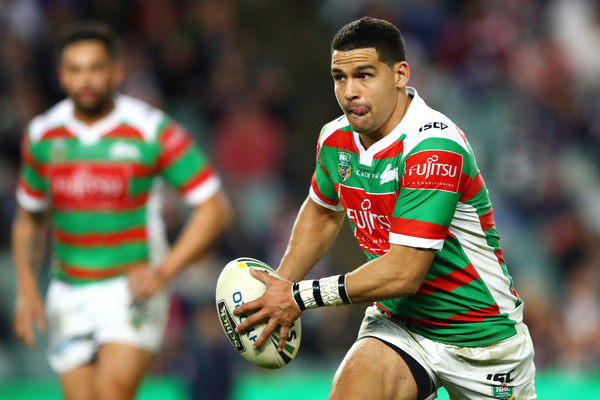 This time, he was given a terrific platform from Cornish, who showed some quick thinking in tandem with Lindsay Collins to provide the Roosters hooker with enough time and space to send over a cut-out pass to Aidan Guerra, which the second-rower caught cleanly and elegantly on the full, outplaying Sutton to slam the ball to ground for the Chooks’ second spectacular short-range effort of the night. The four points – and six, once Gordon had converted – were all the more dispiriting for the Rabbitohs in that they came on the back of a string of bad luck, from a knock-on from Keary that wasn’t identified by the referees, to an error in the play-the-ball from Burns early in the tackle count, with even Reynolds’ outstanding leadership proving unable to gel the Bunnies into any real momentum. 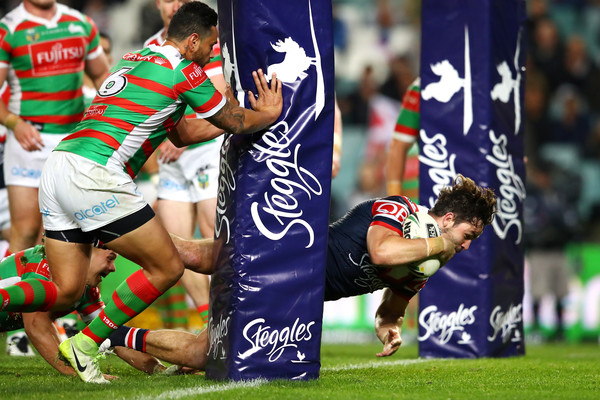 At this stage, then, Souths really needed a breakout effort from a key playmaker to remain in the game. A few minutes later, Crichton provided just that, putting in a damaging run to bust through tackles from Connor Watson and Guerra to get the ball across to Goodwin. From there, Bunnies centre showcased a deft left-foot step to get around Manu, and then the same step to get around Gordon, speeding down the field towards the try line. Ten metres out, Manu finally got him to ground, but Goodwin’s momentum was enough to slam him over the line once he got to ground, with Daniel Tupou crashing in from the side to try and get a hand under the ball, but arriving much too late. 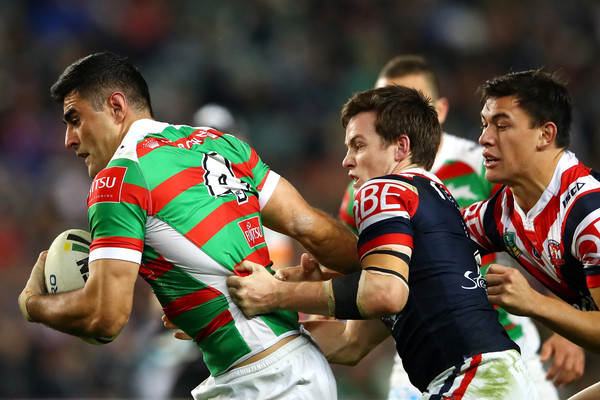 After a game dominated by short-range tries, this stunning, breakout effort was just what the Bunnies needed to prove to themselves that they had a shot at notching up aa win, bringing it once again to a two-point game with barely ten minutes left on the clock. As might be expected, there were a fair few moments of drama during the countdown including an injury to Gordon and a badly timed penalty from Sam Burgess for some facial action on Latrell Mitchell after the tackle had been completed, but the most dramatic came four minutes out, with possibly Reynolds’ best bomb of the year – a kick so good, and so dangerous in its bounce, that it seemed to dishevel both teams, with Sam Burgess unable to clean it up on the edge of the field until Watson slammed in, getting between the big prop and the Steeden, and forcing him to fumble it in his efforts to make it over to the wing. 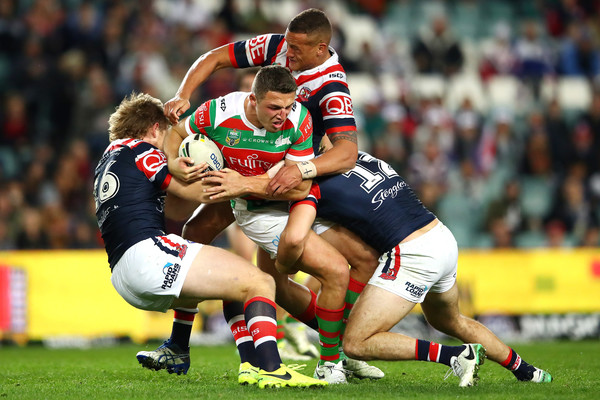 Combined with some fairly spotty defence from the Bunnies in the closing moments, Burgess’ uncharacteristic lack of discipline sealed the deal, with the Roosters bringing home one of their most exuberant wins of the 2017 – a win all the more dramatic in that it was their second victory over the Bunnies this year, the outcome of such a close game, and a big turnaround from the week before. They’ll be looking to continue consolidating that form, then, when their big names return from Origin, while Souths will be desperate to recapture something of their magnificent performance over the Panthers in the coming weeks.