The Panthers brought home a rousing win at Pepper Stadium on Saturday night, marking up their first victory since they played against the Raiders in Round 14. In reality, that’s only two losses – against the Cowboys and the Rabbitohs, with the bye making up the third week – but the dispiriting nature of both those losses made the Penrith losing streak feel more emphatic than a mere two week hoodoo. Similarly, the fact that Manly had remained unbeaten since Round 11 compounded the sense of the mountain men finding some kind of closure with this particular game, which will surely come to be seen as a pivotal moment in their push towards finals football.

James Tamou started the tryscoring nice and early, opting for a hard run through Marty Taupau, Tom Trbojevic and Brenton Lawrence off the back of a nice short ball from Nathan Cleary, and following two back-to-back sets for Penrith. With Cleary adding the extras as reliably as ever with barely five minutes on the board, it was clear that the Panthers were determined to regain the form they’d showcased in their 38-0 win over the Bulldogs in Round 13. In particular, the 42-18 loss to the Rabbitohs the previous week must have been a sticking spot, and from the moment they hit the field it was clear that they were aiming to put that scoreline as far behind them as possible. 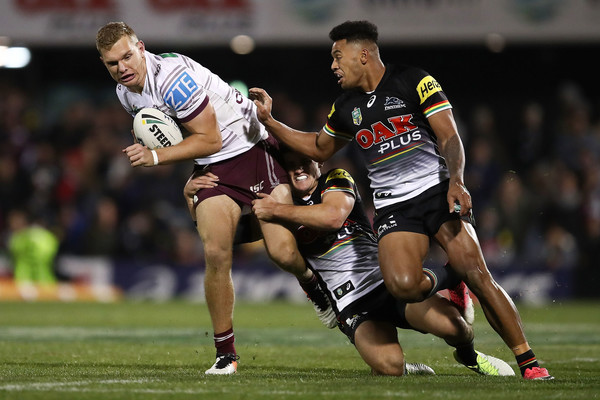 With the Panthers taking the Sea Eagles by surprise in these opening minutes, it was critical for the visitors to put down something special to prevent Penrith coasting on their opening momentum. That they managed to do so was largely down to Daly Cherry-Eans, who was clearly determined to put in an Origin-worthy performance. The critical play started with a terrific kick from the Sea Eagles halfback, who dropped the ball right on the tip of his toe, inflecting it in such a way that it was able to curve around behind the dead ball line, trapping Cleary in the in-goal area and notching up DCE’s fifteenth forced dropout of the season. 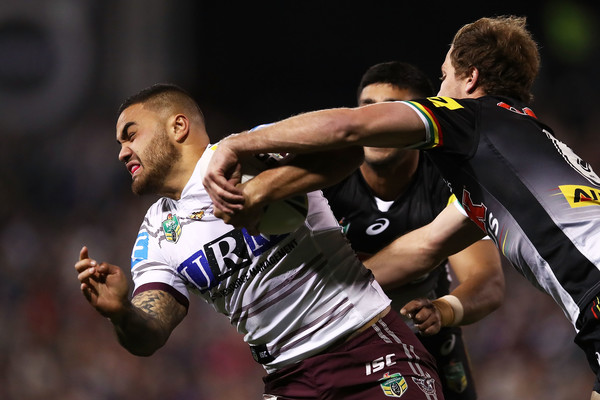 At the end of the subsequent set, Blake Green took his cues from his halves partner and trapped Dylan Edwards in the in goal area with his own ingenious kick, forcing the Panthers to reform their defensive line once again for a second successive dropout. A great run from Taupau through Tamou, Reagan Campbell-Gillard and Cleary then provided DCE with the platform to send a deft cut-out pass to Dylan Walker, flicking the ball across so rapidly that Tyron Peachey was forced to watch it pass right before his face before he knew what had hit him.

Full credit has to go to Tamou for the run, and to Walker for sensing DCE’s plan and getting where he needed to be, but there was no doubt that this stunning passage of play had been bookended by – and belonged to – the Manly halfback, with Walker’s four points bringing him to the equal top try assister in the NRL (with Ashley Taylor), as well as ensuring his best year to date in terms of try assists, with at least another eight rounds of football to go.

As the half hour mark loomed, things started to get a bit convulsive for the Sea Eagles, with the penalty count rising to 7-2, and DCE receiving a formal warning from Henry Perenara. Despite that warning, however, Frank Winterstein opted for a blatantly late tackle on Cleary, who copped an elbow to the chin a full few seconds after having disposed of the ball, leading to a reiterated formal warning from Perenara to DCE. Given how emphatically the previous warning had been delivered, it was a bit curious that Perenara didn’t send a player off the field then and there, especially give how explicit Winterstein’s infraction had been, making me wonder whether DCE’s powers of persuasion had actually had some impact upon mitigating the result this time around, despite Perenara appearing to dismiss his claims.

Still, things were in a precarious state for the Sea Eagles, and they grew even more so following an amazing pick-up from Brian Kelly right on the line, with the young centre spinning out of the Penrith defence for what initially looked as it if might be the start of a barnstorming run down the field, only for him to cough up the Steeden instead of putting through the tackle bust that his momentum seemed to guarantee, granting Penrith a fresh set of six in the process. Yet, sensing that things were growing desperate, the Sea Eagles forced the hosts into some of their messiest play over the following minutes, determined, above everything, to prevent them putting down more points before the break. 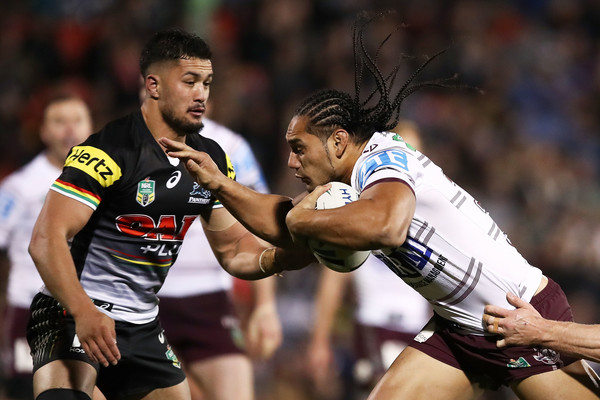 It was to no avail, however, with Dallin Watene Zelezniak managing to put down four more points five minutes out from the break, off the back of one of the more unusual high ball contests this season. It started with a terrific fifth-tackle kick from DWZ that was contested by Matthew Wright, but as it turned out DWZ’s main opponent wasn’t the Manly winger but Waqa Blake, who had also gone for the ball only to find it ripped out of his hands by his own winger.

As a spectacle of miscommunication, it was comparable to the indecision between Braidon Burns and Cody Walker in the wake of Mitch Cornish’s high ball during the Roosters-Rabbitohs clash the night before. This time around, the outcome was more favourable for the defenders, with DWZ managing to just retain possession, shifting the Steeden from one hand to the other, and more or less grounding with his fingers. Still, the try raised the question of whether the Panthers had knocked on in the process of the ball shifting hands from Blake to DWZ, since there had clearly been no communication between the two edge players, nor anything resembling a pass, making the Penrith lead all the more frustrating for the Sea Eagles as they headed into the break, and even more so when the Panthers had a try from Blake disallowed on precisely these grounds midway through the second half. 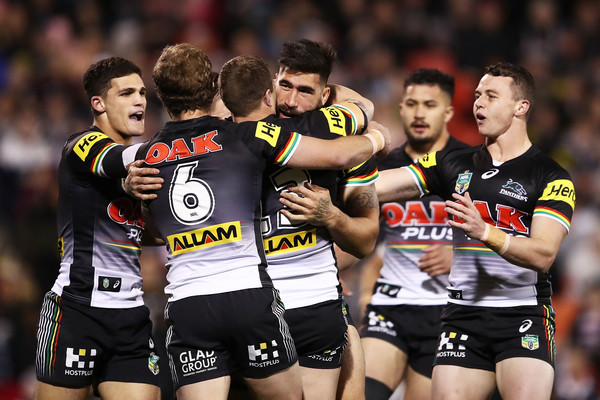 Coming back after the break, it was clear that Manly had to emphatically make this half their own, and it augured well for them they they finally got a penalty in these opening minutes, thanks to Tim Browne holding Wright too long in the tackle. From there, the Sea Eagles put in their most stunning sequence of the night so far, thanks, once again, to some quick thinking from DCE. About twenty metres out from the line, the Manly halfback popped the ball across to Shaun Lane, and came so close to being tackled by both Isaah Yeo and Matt Moylan that his pass effectively felt like an offload – call it a pre-emptive offload – drawing in the Penrith defensive line but forcing them to commit to Lane as much as to him.

Accordingly, Lane took the brunt of Moylan’s tackle, but fended him off and stayed with the Steeden just long enough to draw Peachey in from the line as well, before flipping the ball backwards to Tom Trbojevic in one of the best offloads of the 2017 season. The dexterity didn’t end there, however, with Turbo dodging around an ankle tap from Josh Mansour and busting through a tackle from Edwards to put down the most spectacular try of the night so far – a testament to what Manly can do in attack when they get their timing and strategy right.

This time around, kicking duties fell to Koroisau, instead of Walker, and once again, the Sea Eagles failed to add the extras, but so spectacular and sudden had these four points been that the missed conversion didn’t really seem to matter, with Manly seeming to reach their comeback mode, even as these would turn out to be the last four points of the night, with Penrith relying on two penalty goals to edge out their lead to a more comfortable 16-8. 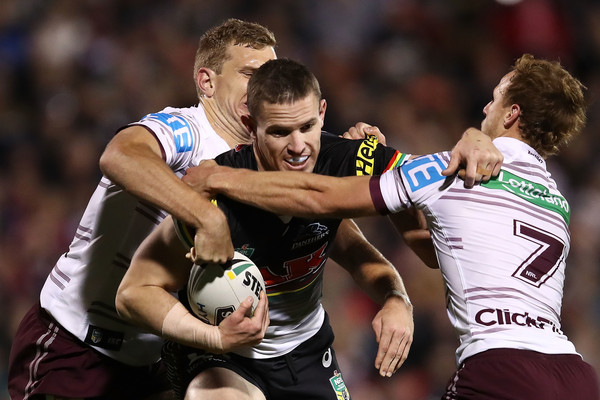 The first of these goals came at the fifty-seventh minute, on the back of a stunning sequence from the Panthers – or, rather, a stunning sequence from DWZ, who made up for his team granting Manly a seven tackle set with a spectacular run from the Penrith line, where he collected the ball from a DCE kick, ran twenty metres, dodged around an ankle tap from Walker, was momentarily brought to ground by Lawrence, only to finally bust through the tackle, and then hit the turf for good thirty metres out from the Manly line.

His extraordinary combination of speed and agility was all the more cathartic for Penrith fans in that Peachey had made a similar run a couple of minutes before, collecting the ball after Walker coughed it up and then running the length of field, with Mansour burning up behind him in support, to put down what appeared to be four points at the other end of the field, only for the whistle to blow and Perenara to reveal that he’d knocked the Steeden on ever so slightly in the process of getting a hand to it.

After that wasted energy and spectacle, DWZ’s run was like a fresh start for the Panthers, with Sione Katoa successfully milking a penalty a couple of tackles later, despite Trbojevic rolling away as soon as Katoa played the ball, and despite Robbie Farah going for a similar move the previous night to no avail, setting up Cleary to put the Panthers ahead by a converted try. By the time that the second penalty goal came, eleven minutes later, Penrith had more or less taken control of the game, which fizzled a bit in its later stages, as the Sea Eagles became more desperate and lost some of the discipline of the first stanza.

Manly will be raring for a victory, then, when they take on the Tigers at Lottoland next week – a home game that they need to win if they are going to be able to hold their heads up with pride over the later part of this season. Meanwhile, the Panthers may have broken their three week drought, but they’ve still got the spectacle of two fairly frustrating losses at their back, and are going to need to quickly compound their victory with a win on the road when they take on the Warriors in Auckland.