Saturday night’s game between the Titans and Sharks at Cbus took wet weather footy to a new level, making for one of the most surreal clashes I have ever seen. So bad were the conditions that the Fox commentators were wondering whether the game might actually be called off, with torrential rain setting in twenty minutes before kickoff, and only intensifying over the course of the first stanza. For the most part, it looked more like a tropical storm than a regular winter shower, with the pitch already full of deep puddles as the first set got underway.

The Titans’ goal line, in particular, was one giant swamp, making it almost impossible to predict where grubbers would land, or even what would happen with possession more generally whenever the action started to converge on their end. It didn’t help, either, that the floodlights were on, reflecting off the water and making it almost impossible to see the line in certain places, while also suffusing the entire field with a brilliant and blinding glare.

Combined with the driving rain, that came as close to a zero visibility game as I’ve ever seen – at least during the first half – with the torrential downpour just seeming to get heavier and blurrier in slow motion, rendering the Bunker all but useless. At times, the sheer amount of water being splashed up around the players made it impossible to even locate the ball, with the result there was no way of telling whether Gerard Beale had managed to put down a try twenty minutes in, just as the exact nature of a contest between Jarryd Hayne and Andrew Fifita five minutes later was also lost in the murk. 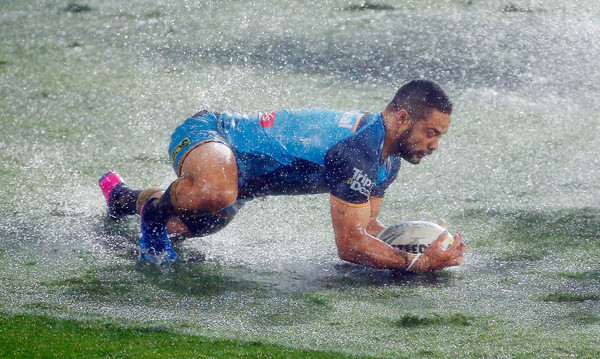 By halfway through the first stanza, both coaches had instructed their players to move in pairs or groups of three, while even the ostensibly safest decisions turned out to be unpredictable. For his first conversion, at the ninth minute, Ashley Taylor seemed to be set up in an ideal position to put it through the posts, but with a boot full of water, a sodden pitch and a slippery ball, the Gold Coast halfback was unable to kick with his usual precision, looking on in frustration as the Steeden curved away at an odd angle to the right. 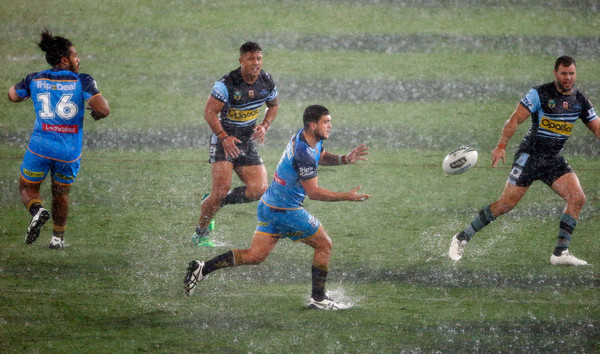 Under those conditions, it was almost a matter of chance who would score first, and the fact that the Titans dominated the first stanza was probably as much a matter of their relative familiarity with the field and dependence upon the home crowd as anything else. Nine minutes in, Konrad Hurrell put down the first points, off the back of a deft kick from Taylor that threaded between Wade Graham and Jack Bird with as much dexterity as you’d expect on a cloudless day. With Anthony Don and Kevin Proctor right behind Hurrell to clean up if necessary, it was just the display of organisation and focus that Gold Coast needed to take ownership of the dreadful conditions.

Taylor himself was the next to go over, with a great run out of the scrum that saw him outstepping Bird to crash over the line. It culminated some terrific momentum from the Titans, with a well-placed kick from Nathan Peats (especially given the escalating rain) having trapped Bird to provide the hosts with the goal line dropout in the first place. While Taylor may have conceded goalkicking duties to Tyrone Roberts after his opening effort, the five-eighth found the sodden conditions just as debilitating, and Gold Coast went into the break 8-0 against the reigning premiers.

By the time the first siren had blown the rain was starting to lighten up, and there was little more than a drizzle when the teams ran back onto the field. It was a testament to the design and drainage of Cbus, then, that the field was almost completely devoid of puddles by about ten minutes in, as the game started to resemble regular footy a little more. Still, the Titans had gained the momentum by this point, and with James Maloney out the Sharks were unable to muster much in the way of defence after such a disorienting opening half.

It felt appropriate, then, that Taylor was the next to go over, off the back of a deft pass from Peats, for the first double of his career. Showcasing the same nifty footwork he’d brought to bear on his previous four-pointer, he scooted inside the defence and curved around to plant the ball right beneath the posts, with James Segeyaro arriving just too late to put a hand beneath it. This was one of the most empowering moments of the night for the Titans, not just because it culminated a heartstopping couple of plays (including Peats coughing up the ball only for Gold Coast to recover it moments later), but because by bookending the break Taylor made it clear that his team were prepared to be even more dominant in this second stanza.

And so they were, putting down three more unanswered tries in the next twenty minutes to leave the Sharks sweating under the possibility of a 30-0 scoreline. It started four minutes later, as a short flat pass from Taylor allowed Kevin Proctor to suddenly straighten up the play and weave his way through the defenders, bringing the score to 20-0 once Roberts put it through the posts. While Taylor may have been taken off conversion duties, it was his high ball that set up the next try, with Roberts reaching it just as it was bouncing to flick it fifteen metres behind his back, where it found Pulu and then Greenwood a pass later, who was perfectly placed to crash over the line for the fifth try of the evening.

Two minutes later, Pat Polintoni chanced his hand and ran at the line straight out of dummy half, crashing through Valentine Holmes and James Graham – because why not? – and taking the rest of the Cronulla defence entirely by surprise. At this point, it felt as if the Sharks were almost fighting for their season, with Kurt Capewell finally going over eight minutes out from the end for what felt more like a desperation try than a consolation try. 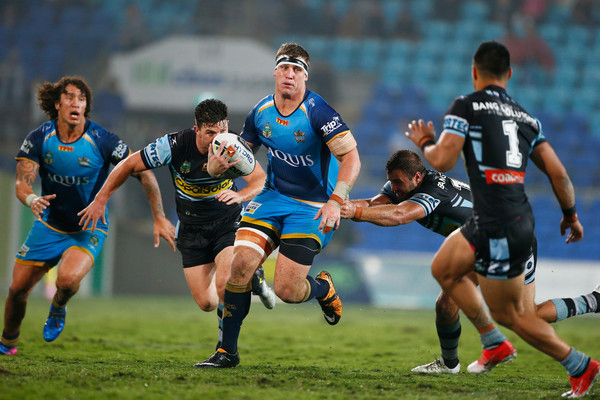 As it was, it came off the back of a lucky break for the visitors, as Tyrone Roberts knocked the ball forwards towards Chad Townsend as the Sharks were converging on the Titans goal line. With the ref calling play on, Townsend suddenly found himself with possession, and while Gold Coast may have worked quickly reform their defence, and the Sharks may have had to take the Steeden the long way around – it was virtually a team try – the young centre finally managed to crash over and prevent the night being a total decimation for Cronulla. 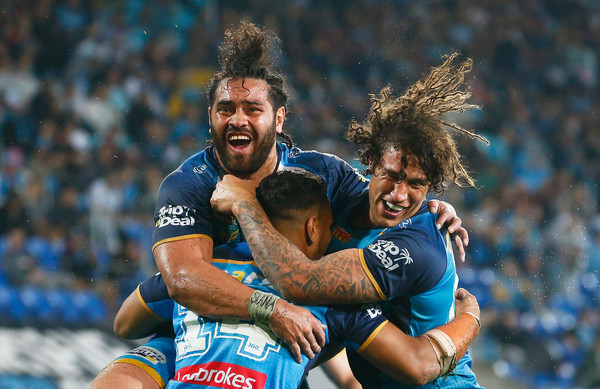 For now, it seems as if they’ve broken the pattern. Still, the blinding conditions probably mean that their home ground advantage was more pronounced than usual. Similarly, you can’t underestimate the absence of James Maloney although, to be fair, the Sharks still had the vast majority of their Origin core in Holmes, Fifita, Bird and Graham. For that reason, this didn’t seem like as definitive a win for the Titans, or as emphatic a loss for the Sharks, as you might expect from the scoreline, and there’s no doubt that the game will be looming large in each team’s mind as they head into Round 20.