The Rabbitohs have put in one of their most dispiriting performance of the 2017 season against a Cowboys side that, conversely, have gelled more seamlessly in Johnathan Thurston’s absence than at any other point this year. While the Barlow Park fixture was technically a Bunnies home game, North Queensland stole the show with a calm trio of tries right on the Rabbitohs goal line – the first two assisted by Jake Granville and the third put down by Granville himself.

Combined with a fairly spotty afternoon from Robbie Farah, and successive ball handling errors from all three Burgess brothers, that made this a game to forget for South Sydney – or at least to remember only as a cautionary tale for the weeks to come. Still, things started well for the cardinal and myrtle, with Cody Walker putting down the first try, after some terrific footwork from Adam Reynolds, who collected the Steeden from Farah right on the line and then put in a terrific right foot step to beat both Gavin Cooper and John Asiata before sending the ball out to his fullback.

From there, all Walker had to was build on his halfback’s momentum, scooting out of an ankle tap from Jake Granville and a late tackle from Lachlan Coote to ground the ball right beneath the posts, in a stirring try for Souths for more reasons than one. First, the game had been pretty even – or pretty evenly messy – from both sides over these opening moments of the game, with five penalties clocked up in the first ten minutes alone. Second, the Rabbitohs have been held scoreless in the first stanza of four of their five last clashes against the Cowboys, turning it into something of a statement of purpose for them to get down the first four points this time (and first six points, once Reynolds had bookended the try with an effortless conversion). 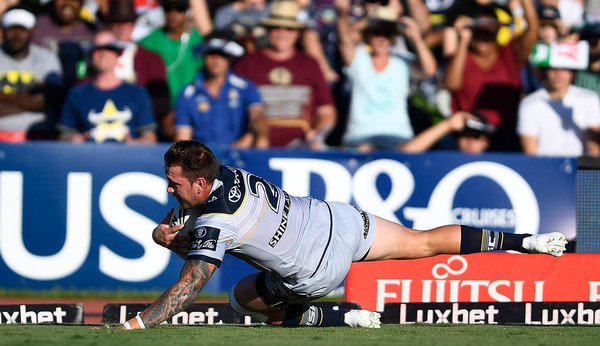 Third, the Bunnies had been kept scoreless full stop last time they played in Cairns – a prospect and memory that this opening try immediately exorcised from the field. Finally, this was a testament to Walker’s increasing confidence at fullback, and his newfound synergy with the spine. For all those reasons, this may have been the most important opening points scored by the Rabbitohs this season, and went a long way to cementing Barlow Park as a temporary home venue.

Still, that just made it all the more frustrating when Tom Burgess coughed up the Steeden on the restart, under the pressure of a barnstorming tackle from Asiata, who was clearly keen to make up for letting Reynolds through a couple of minutes before. The Cowboys then continued to compensate for the Bunnies’ opening six points, with Granville making up for letting Walker through with a quick short ball to Taumalolo right on the line, allowing the big lock to twist and spin through Farah, Walker and a escalating group of other last minute Bunnies defenders to crash over the line. 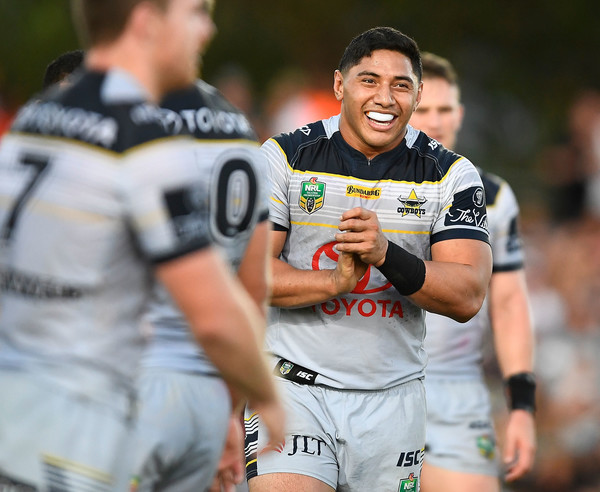 The commentators described it as soft defence, but, in reality, Taumalolo can make any defensive line look soft. Instead, this was more disorganised defence, with the Rabbitohs making no real accomodations for the twist-and-spin that’s always imminent whenever Taumalolo gets too close to the ball and the field of play. For the try to come so quickly on the back of the Bunnies’ opening effort was bad enough, but the fact that it was a similar short-range effort, and involved several of the key players from the Bunnies try, allowed the Cowboys to really feel as if they’d regained control of the ground, especially once Lowe slotted the ball through the posts and brought the scoreline to 6-6.

A couple of minutes later, a trio of cut-out passes form Granville, Michael Morgan and Lachlan Coote sent Kyle Feldt over the line, complementing Granville and Taumalolo’s short-range effort with a spectacular long-range display of power and dexterity. Coote’s pass was particularly ballsy, and so improbable that his brief pause forced Alex Johnston to commit to the tackle, and draw in the Rabbitohs defence behind him, so unlikely did it seem that the Cowboys fullback would be able to get the Steeden all the way out to his winger. As it turned out, however, that’s just what he did, with the ball clearing a good third of the width of the field, and finding Feldt unmarked, who simply had to accelerate to put down four more points in the corner.

While the try assist was the star of the show, however, full credit has to go to Granville and Morgan as well, whose cut-out passes timed things just delicately enough to put Coote in the right place at the right time. With their second successive try, and a try that showcased their skill sets in such a different way from their opening try, the Cows had well and truly retaken ownership of Cairns – at this point, it was a Townsville home game in spirit – while the fact that Feldt had put down the second four points made their resurgence particularly rousing, since he’s a bit of a rallying point for the team’s ability to come back from behind, and to put down unexpected and game-changing moves.

Things got even better for the Cowboys a couple of minutes later, when Granville more or less replicated his opening try assist, but this time with Coen Hess, who twisted and spun through Jason Clark and Angus Crichton to put down four more points for North Queensland, and his eleventh try of the year – an extraordinary achievement for a backrower. If the Rabbitohs defence had seemed disorganised before, now it genuinely seemed soft – or perhaps just more disorganised, since it apparently hadn’t learned the lesson of Taumalolo’s opening four points.

At the same time, the fact that the Cowboys were able to simply replicate these opening points spoke to their increasing assurance, calmness and organisation without Johnathan Thurston at their helm. In effect, they were playing in a Thurston-like way, as if Thurston was commanding the field, despite their skipper and figurehead’s absence, and there’s no better compliment you could give the team in the build up to finals footy. 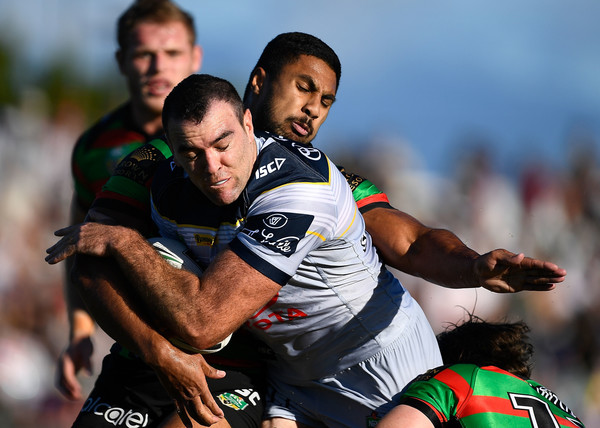 From there, the Rabbitohs tried to rally their game, but couldn’t quite manage to get things together. Two minutes out from the siren Reynolds aimed for a goal-line dropout, only to kick too far and grant the Cowboys a seven tackle set to see out the first stanza. Another spotty fifth-tackle option from Reynolds after the break, combined with some scrappy ball handling from Sam Burgess under the pressure of a tackle from Feldt, just disheveled the Bunnies further. Things just got worse for South Sydney when Granville went from try assister to tryscorer five minutes into the second half – ironically, off exactly the same move that had got Taumalolo and Hess over in the first stanza.

Collecting the Steeden right on the line, Granville dummied as if to look for another frontrower to twist and spin over the chalk. With two tries by forwards on the board, the Bunnies were finally prepared for this move, but unfortunately Granville chose this exact moment to run the ball himself, taking advantage of a massive gap between Reynolds and Crichton to slam forward and score the easiest four points for the Cowboys – and the most embarrassing four points for the Rabbitohs – so far this year. It was the third time the Bunnies had been taken by surprise right on their goal line, and the third time their judgement had been belated. From this point, then, they weren’t simply playing for points – they were playing to regain some pride after some of their most undisciplined form this season. 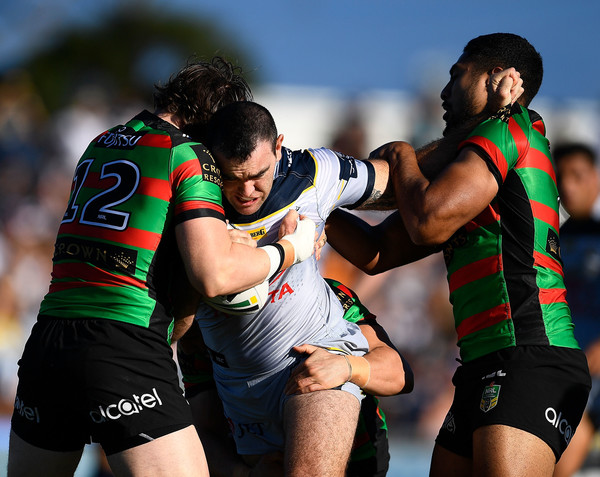 The Cowboys may not have scored for a while, but a massive run from Taumalolo gifted them a sustained period of field position, until a knock-on from Kane Linnett returned possession to the Rabbitohs. Yet, over the next ten minutes, South Sydney proceeded to put in possibly their scrappiest play of the 2017 season. At the fifty-eighth minute, Taumalolo and Ben Hampton drove Sam Burgess eight metres backwards, a damaging sight for the Rabbitohs back row. A minute later, the Bunnies got some good momentum, shifting the ball over the side of the field, only for some miscommunication to result in their most vulnerable moment of the game so far.

All Braidon Burns needed to do was to stay on the wing, collect the ball from Robert Jennings, and storm up the sideline, but he instead chose to shift inside, thinking his centre might opt for an offload instead of a regulation pass, leaving Jennings behind him to send the ball into open space, and over the sideline. Shortly after, Farah was deep in conversation during the play-the ball, and then chose to grubber on the fourth tackle even though the outside players weren’t prepared for it, allowing Feldt to scoop up the ball and preclude a goal-line dropout. To make things worse, Morgan aimed for a 40/20 on the restart, and while he may not have quite nailed it, Feldt and Justin O’Neill stormed down the field to drag Johnston over the line after he collected the Steeden, turning what should have been a Farah-enabled goal line dropout into a dropout for the Cowboys, and on the first tackle to boot.

With Te Maire Martin coughing up the Steeden early in the next set, however, the Bunnies were given a bit of breathing-space, and a couple of minutes later they had the chance to repeat the formation that had almost sent Burns over a couple of sets before. This time they were closer to the line, and this time Burns held his position, as Farah and Reynolds put in a spectacular pair of cut-out passes, setting Jennings up for the short ball needed for his winger to get to ground. Reynolds, in particular, put in a superb pass, sailing the Steeden across Crichton’s chest, in a nice rejoinder to Coote’s looping long ball earlier in the game.

In any other match, this would have put the Bunnies back in competition, but their form meant that they didn’t even feel like contenders now, especially once Reynolds’ conversion bounced off the post, and Farah tried to play the ball too quickly on the restart, returning possession to the Cowboys almost immediately. With Jennings taken off for a HIA, it just didn’t feel like the Bunnies’ afternoon – or, rather, it felt like the Cowboys’ afternoon, with North Queensland synergizing more seamlessly than in any other game this year without Thurston, With Coote slotting through a field goal three minutes out from the end, the Cowboys had stamped their signature on the game, and will be looking to maximise this momentum when they take on the Warriors at home next week.