The Broncos put in one of their most dominant performances of the 2017 season against a hapless Bulldogs outfit at Suncorp on Thursday night, breaking what little momentum the visitors had managed to glean from a two-point win over the Knights two weeks before. The loss was even more painful in that the started with a surge, with Marcelo Montoya putting down the first points of the game six minutes in, after Canterbury managed to move up the right side of the field and get outside of the Brisbane defence with surprisingly little effort.

It wasn’t just in attack that the Bulldogs started strong, however, with a terrific defensive set ten minutes in managing to hold off the Broncos following two penalties and a restart, culminating with a terrific trysaving tackle from Josh Morris on Matt Gillett that saw the second-rower coughing up the Steeden moments before he was about to ground it, restoring possession to the visitors in the process. 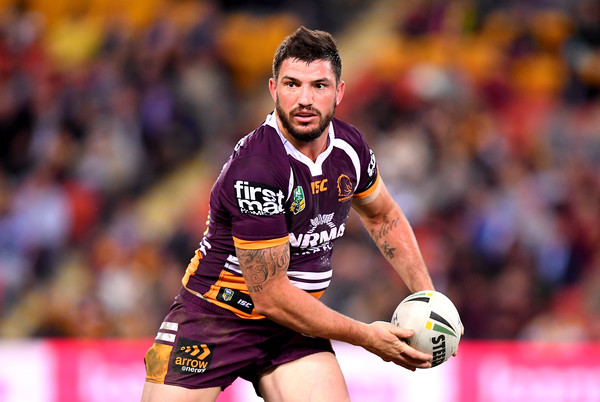 You could tell that the Broncos were a bit shocked during these opening minutes, and yet shock is sometimes the best motivator for a team. So it was on Thursday night as well, with Brisbane responding to Montoya’s opening points with a string of six tries before Chase Stanley managed to put down one four-pointer seven minutes out from the end. Even that, though, was upstaged by James Roberts, who not only managed to make a consecutive double, but to slam the ball to the ground on the very stroke of the final siren.

It wasn’t just the frequency but the regularity of the Brisbane push that was so impressive, with the Suncorp custodians putting down points roughly every ten or fifteen minutes from the twenty-minute mark, when they managed to run the length of the field on the third tackle. It started with Andrew McCullough, who ran right up the ruck out of dummy half, dodging Aiden Tolman and Josh Jackson to send the ball across to Tautau Moga, who in turn scooted through a low tackle from Montoya and outran Josh Reynolds to get the ball over the line.

Ten minutes later, Ben Hunt went over again, for one of the strongest tries of the evening. After making several shows at passing the ball, he dodged his way around several tackles before finally putting down points, with only Matt Frawley managing to lay a hand to him. It was a particular impressive display given that Hunt had rolled his ankle earlier in the game, and especially damaging for the Dogs’ momentum, since it came off the back of a renewed period of possession for the Broncos following a knock-on from Adam Elliott on the first tackle of what initially looked to be a fairly promising Bulldogs set.

The Broncos weren’t done with the first stanza, however, as a terrific offload from Hunt with twenty seconds to go allowed Jordan Kahu to put down four more points after the siren, thanks in part to some deft play from Anthony Milford and Matt Gillett. As Kahu converted his own try, it felt as if the Dogs had already been defeated, and yet the second stanza would offer them a few potential turning-points as well.

The first came five minutes in, when Moga once again looked set to cross, or to set up any number of other Broncos to cross, only for Brett Morris to bring him down with a trysaving tackle, leading Montoya to then punch the ball into touch in the process. Once again, Brisbane received a goal-line dropout, and once again it ended badly for the visitors, with Will Hopoate knocking back the high ball to set up Moga, who skidded over the sideline moments before he could get a hand to it, in an incredible let-off for the Dogs.

If that wasn’t enough the Broncos got another goal line dropout, and then a penalty, only to take the unusual decision – with a ten point lead and plenty of momentum – to opt for penalty goal instead of a touch-and-go, in the biggest reprieve for the Bulldogs so far, who got some much needed breathing space after a series of punishing sets. Apparently Wayne Bennett’s half time address in the sheds had focused on keeping the ball moving and the Dogs tired, so you could only assume that the Broncos now realised that their own big men needed a bit of a break before moving into the last thirty minutes of the game.

Around the one hour mark, the hosts once again started to put all sorts of pressure on Canterbury, who just seemed to concede one penalty and goal line dropout after another. For a moment, it looked as if there might be shift in momentum after Jonus Pearson bombed a certain try on the back of a terrific high ball from Milford that bounced in all kinds of unexpected directions and eluded every Canterbury player trying to get their hands to it. Still, with Reynolds called out for an obstruction on the same set, Brisbane were granted another penalty, with the Bulldogs once again managing to somehow hang on until Reynolds, now at fever pitch, knocked on in the midst of a trysaving move on the final tackle.

From there, it was almost inevitable that the Broncos would score next, and they did it in the most dispiriting way for the visitor, as Kodi Nikorima simply managed to elude Raymond Faitala-Mariner on the first tackle after the subsequent goal line dropout. As if the simplicity and elegance of the try weren’t bad enough, the Dogs hadn’t even managed to target Nikorima’s comparative inexperience at fullback with any especially challenging bombs or high balls. As a result, it now finally felt as if Nikorima had outclassed anything the Dogs might still throw at him, and even reached a new evolution into the no. 1 jersey in the process. 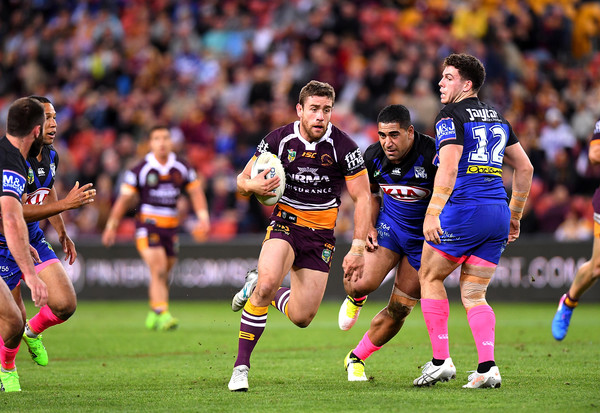 To their credit, Canterbury had managed to keep Brisbane scoreless for a good twenty minutes, but when the drought broke the floodwaters came, as the hosts put down two tries in quick succession. The first came from Josh McGuire at the sixty-second minute, off the back of a lovely kick from McCullough that threaded its way through the Dogs’ defensive line to send the Origin lock over the line for the first time in 2017. 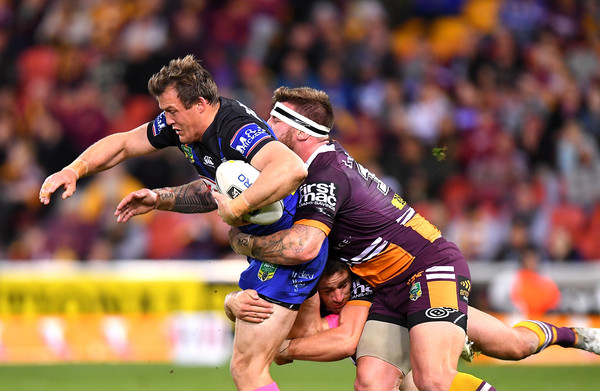 The next try came from James Roberts, who dodged and weaved all the way from the left to the right wing until he found a line break and did what he does best, storming past the most fleeting attempt at a tackle to slam the ball over the line. It was the third successive try without the Dogs touching the ball, and so it was hard not to see Roberts as a symbol for the entire team at this point, speeding away from a straggling Canterbury outfit that hadn’t managed to lay hand to Steeden for a set of six for twelve straight minutes. 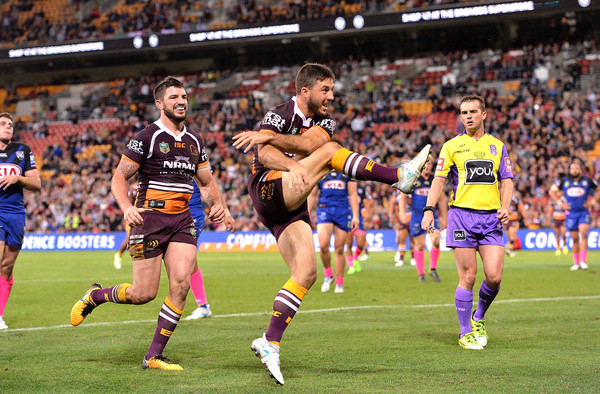 Still, for a moment there, it looked as it there might be a brief swing back towards the Dogs, with Adam Blair binned with exactly ten minutes to go and Montoya putting down his consolation try three minutes later. Despite Stanley’s efforts, though, and even with twelve men on the field, the Broncos still felt dominant, and by the last few minutes it was as if they were simply practicing their goal line defence against a depleted team in preparation for their more demanding adversaries over the following weeks.

Indeed, so disempowered did the Bulldogs become in these final minutes that it started to feel as if the Broncos were actually using them as an opportunity to experiment with their game plan, with Hunt taking the bold decision of opting for a short goal line dropout despite the Dogs having an extra man on the field. Given that Des Hasler had made short dropouts a signature at Belmore in the early part of the year, it was a cruel irony that saw Brisbane now using the Dogs as a testing ground for how well it might serve them in the build up to finals footy. 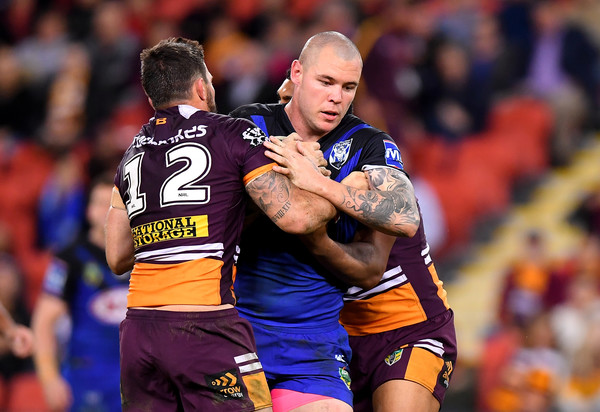 It was both incredible and predictable, then, when Roberts went over again one minute out from the end, off the back of some deft passing from Nikorima and Benji Marshall. Bringing the score up to forty points, it ensured that the Broncos stamped their signature on the second siren as much as they had on the first siren, even as Roberts’ double seemed to accelerate beyond anything the Dogs could even fathom, let alone counter.

With Kahu slotting the ball through the posts moments later, the visitors felt almost incidental, as if we were just watching a Brisbane display game for the benefit of the fans. It’s a good sign for the Broncos in the build up to the finals, although their opponents will get more challenging as the next few weeks proceed. On the other side of the Steeden, it has to be one of the most harrowing losses for the Bulldogs this year, and you can be sure they’ll be looking to regain some pride when they take on the Panthers at Pepper Stadium next week.