The Raiders came away with a stunning win over the Sharks at Southern Cross Group Stadium on Saturday night, offering their fair share of spectacle after what initially appeared to be a bit of anticlimactic performance following on from such a decimating display by Brisbane the game before. With six tries to Canberra’s two, they made over Shark Park in their image, playing with such conviction and intensity that you could have been mistaken for assuming that this was their home crowd and ground. 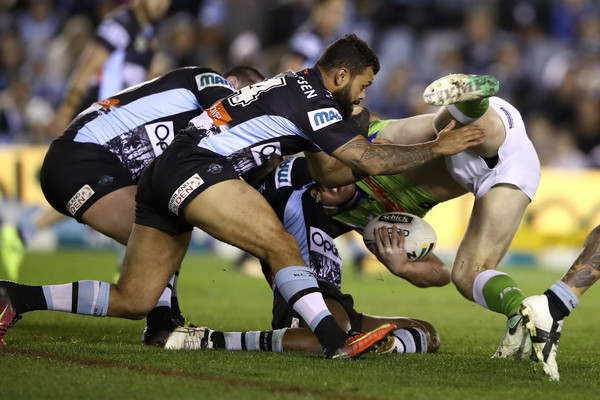 Sosaia Feki put down the first points for the Sharks early on, thanks to a repeat set right on the Raiders’ line combined with a good hard run from Andrew Fifita early in the tackle count to make a statement to the Canberra forwards. From there, Cronulla put in fairly standard set play, but executed it beautifully, as Chad Townsend ran right to the line and drew in Aidan Sezer before sending the ball over to the left side of the field. 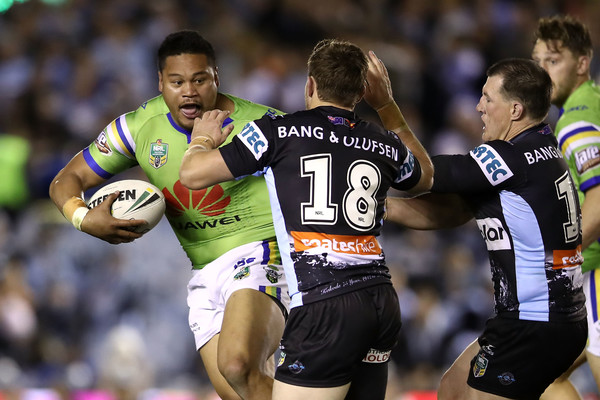 With Joey Leilua turning in and Jordan Rapana following, there was more than enough space on the edge for Feki to crash over, for a try that felt quite effortless and boded well for the hosts. Part of the power of these openings points were also how effectively they compensated for James Maloney’s absence, with Townsend imitating the absent half’s dexterity in getting just on the outside of the defending team, and Valentine Holmes pulling off a difficult sideline conversion to put the Sharkies six ahead. 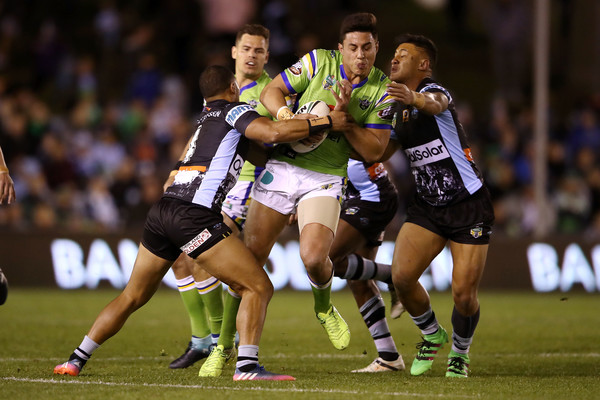 Ten minutes later however, Canberra got an opportunity to reply, thanks to a pair of successive penalties that got them down the Sharks’ end of the field. The second penalty was especially galvanising, since it initially looked as if it might have been an error in the play-the-ball from Elliott Whitehead, only for the the referee to – correctly – call that Matt Prior had got caught up in the ruck and still had a boot on the ball while Whitehead was trying to play it. 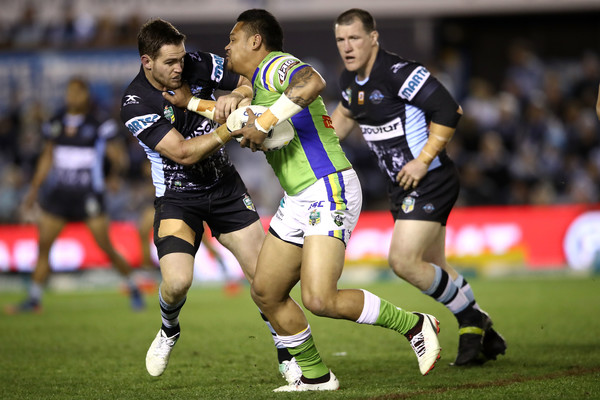 From there, Canberra barely needed to march down the field, but march they did, with Josh Papalii putting in a punishing run down the left side and Josh Hodgson consolidating things with a trademark piece of deception right on the line – a quick dummy to the right before popping the ball over on the short side to Papalii, who slammed through Townsend, Holmes and Jack Bird to put down the first try for the Raiders. With Jarrod Croker adding the extras, and the Raiders getting a penalty goal on the back of their opening try almost as rapidly as the Sharks had, the score was levelled at 8-8, with the game almost appearing to be reset, or to begin anew, now that the Raiders had finally got into their groove. 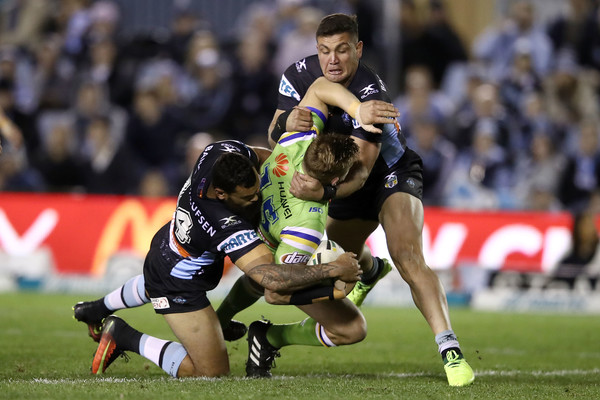 Sometimes coming from behind in this way can give the underdog the advantage, and that was definitely the case with Canberra here, with the green machine crossing over almost immediately after their penalty goal to put down fourteen unanswered points in about five minutes. If Papalii’s four-pointer was a testament to short-range clutch options, then this try was all about their long-range clutch options, with Blake Austin responding to some Cronulla pressure at the thirty-metre line with a massive crossfield bomb that found the line as perfectly as if he’d booted it from ten metres out. 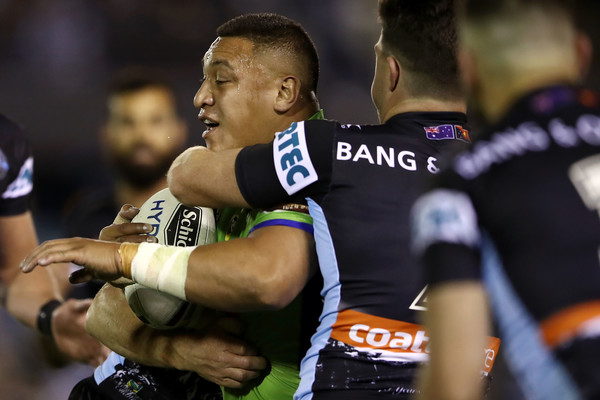 No doubt, the length of the kick gave the Sharks ample time to prepare, but the height and spin of the bomb also meant that Sosaia Feki was unable to properly clean it up, despite positioning himself directly beneath it, with the Steeden spinning out of his hands and straight into Rapana, who was waiting beneath him to catch the ball and slam it to ground all in one movement. If the previous Canberra try had seemed to reset the game, then seeing Feki give away a try totally annulled his opening effort, especially once Croker had slotted the ball through the posts as effortlessly and elegantly as ever to put the visitors ahead by a converted try. 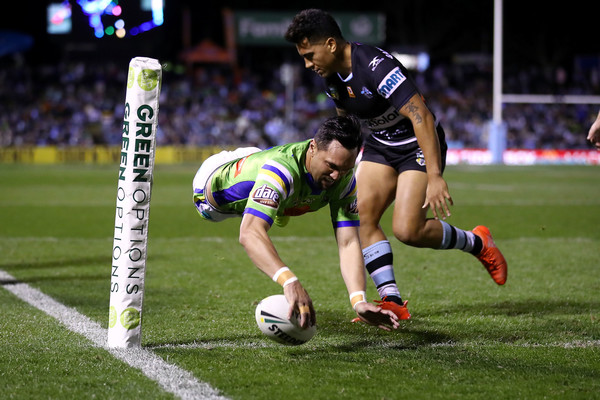 It took the Raiders a bit longer to put down their next points, but when they did they did so in style, with Rapana making it a double thanks to one of the best passes of the year from a centre – or anyone, really – from Leilua right on the line five minutes out from the siren. Before we even got to that point, however, the writing was on the wall – at least for this second stanza – with Cronulla growing more undisciplined and giving away a couple of silly penalties, the first for a high shot from Fifita and the second for a dangerous lift from Wade Graham on Nick Cotric. 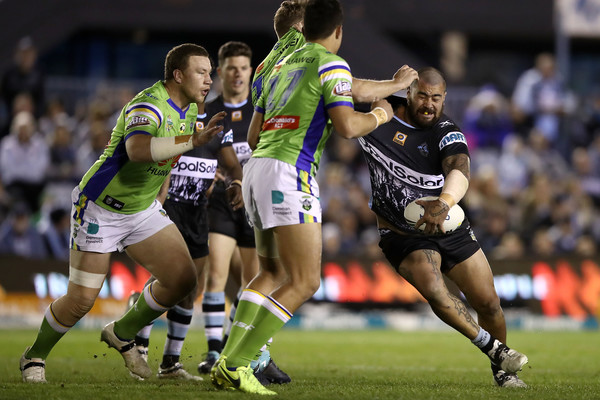 Meanwhile, the Raiders escalated into possibly their best half of football on the 2017 season, full of great moments and touches, including a terrific bit of judgement from Nick Cotric out on the wing to pre-empt the Cronulla attackers trying to get around him as elegantly as Townsend had got around Rapana and Leilua in the opening minutes of the game. That all culminated with Austin making a massive run at the Cronulla defence right on the line, not quite crashing over, but disheveling and disrupting the defence enough for Leilua to put in the play of the night. 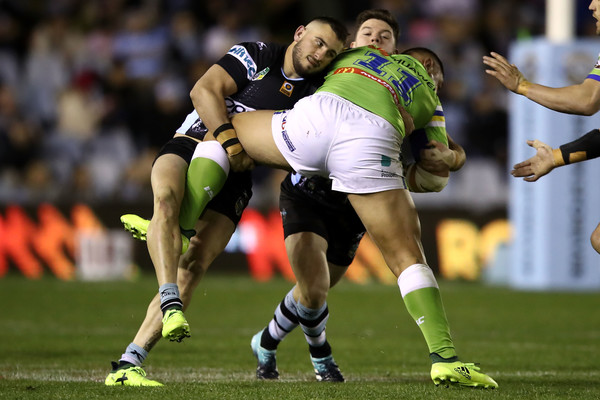 Scooping up the Steeden straight out of dummy half, the big centre passed across the chest of Feki – once again the casualty of a Canberra try – to allow Rapana to get on the outside of Cronulla despite the fact that both attack and defence were within about two metres of the line. It was the kind of play that would have looked impressive even if it wasn’t so compressed, and cemented Rapana and Leilua’s genius collaborative abilities after a game against the Bunnies in which their combined playmaking had been sorely missed at key moments. While Croker’s conversion may have bounced off the posts, this was still more than enough for the Raiders to head into the sheds on a winner’s high. 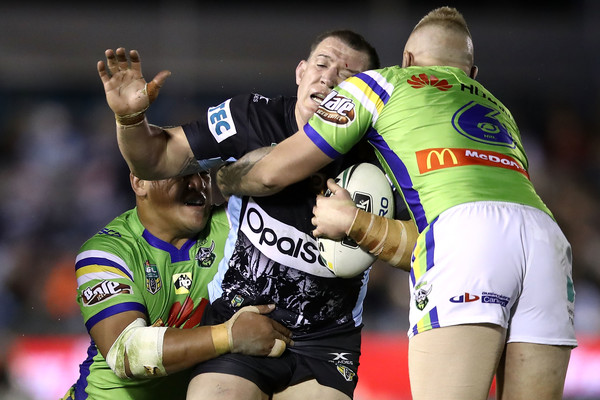 As it turned out, however, they got a further boon, with Hodgson crashing over a minute out from the break – and Croker converting – to bring the Raiders to triple the Sharks’ scoreline as they headed into the sheds. It was the kind of hard, sharp, simple, decisive action that we so often see in the dying minutes of the first half, with Whitehead putting in a massive run before getting the ball across to Hodgson with a terrific one-handed offload. 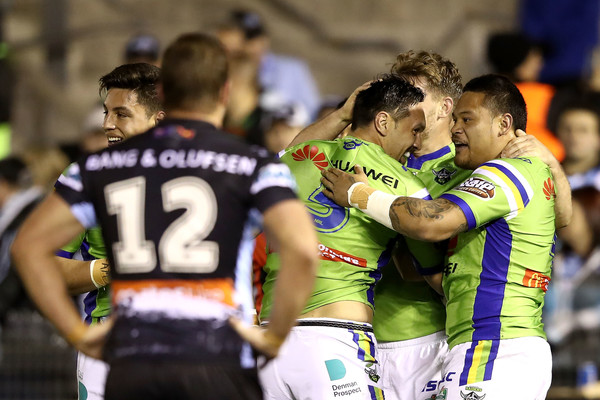 From there, the Canberra hooker looked set to send the ball across in a similarly epic way, putting in an enormous dummy to the left – the kind of dummy that suggested a tryscoring cut-out pass – to turn Bird’s head before skipping through a tackle from Luke Lewis and running a diagonal line to simply slice through the Canberra defence and slam the ball over the line. It was an absolutely glorious way for the Raiders to conclude the first half – an ending worthy of finals footy – and as they headed into the sheds Feki’s opening try seemed to belong to another game. 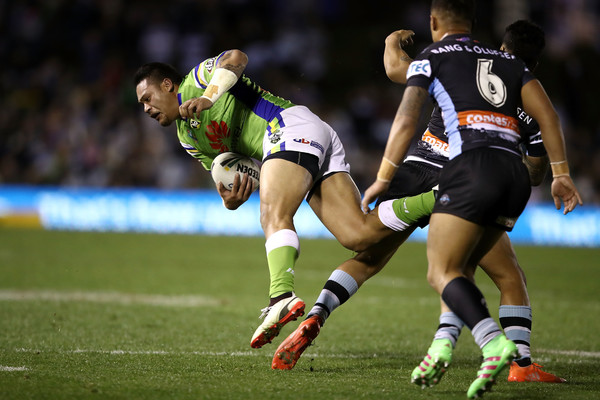 Despite that magnificent escalation of momentum, however, this would turn out to be the last try put down by the Raiders all night, with only Gerard Beale scoring another four-pointer at the fiftieth minute and Josh Papalii being binned midway through the second act. Still, with three penalty goals in the last ten minutes of the match, the green machine managed to regain some steady momentum – enough, at least, to coast to the final siren on the back of Hodgson’s terrific try, consolidating their sense of focus and determination as they prepare for next week’s game against the Warriors in New Zealand.