Friday night’s game at the SCG might have been a bit lacklustre in places, but it ended with one of the best comebacks in weeks, with the Bunnies managing to edge out the Dragons following a deft sideline conversion from Adam Reynolds at the 76th minute. On the back on last week’s shock loss to the Knights, St. George-Illawarra now face a dramatic and unexpected dent in their road to the finals, making you wonder what kind of wild card match we might be in for against the Titans at UOW Jubilee Oval next Saturday, especially after Gold Coast copped a 54-0 thrashing from the Broncos the following night.

From the first part of the game, however, it almost seemed inevitable that the Rabbitohs would win, since despite the Dragons’ supremacy on the ladder their confidence was clearly shot from last week’s game in Newcastle. In the first twenty minutes they gave away six penalties, but the real howler came at the eighteenth minute when they received a penalty of their own, only for Bryson Goodwin to catch the ball before it found touch and send it back over to Alex Johnston for a fresh Rabbitohs set.

Despite some pretty scrappy form, however, the Saints managed to put down the first points, as Jason Nightingale bagged his thirteenth try of the season off the back of a beautiful cut-out pass from Gareth Widdop. Seeing that his winger was unmarked, the skipper sent the ball over in the first of many attempts to target Campbell Graham, who was making his NRL debut for the Bunnies out on the right wing. As Reynolds dashed out of position to try and clean up the damage, it felt as if the Dragons might have found the weak spot in the Bunnies’ armour, but to his credit Graham never felt like a liability over the course of the evening, with the team rallying around him from that moment onwards.

Five minutes later, Nightingale set up the second try for the Bunnies after securing the high ball and trying to get on the outside of South Sydney’s wing, only to be forced into touch as he lobbed the Steeden back into the field of play. From there, the guests swiftly moved the ball back across to the other side of the field, where Johnston managed to break out of a tackle from Josh McCrone, skip through an aborted tackle from Josh Dugan, and finally dance through a mass of converging Dragons defenders to plant the ball over the line.

It was about this time that the Dragons penalty count really started to soar, and the Rabbitohs took advantage of their disarray, with Damien Cook crossing eight minutes later off a deft inside pass from Johnston. Once again the Bunnies showed up the looming gaps in the St. George defence, as their hooker ran straight between Matthew Dufty and Cameron McInnes, only accumulating a mass of St. George forwards on his back once he had well and truly made it over the line.

Nevertheless, it was to be the last try from the Rabbitohs until the 74th minute, as the Dragons started to get their game plan together and look more like the team we saw at the beginning of the season. From hereon out, they would enjoy three unanswered tries, the first of which came from Joel Thompson about half an hour in, following on from one of their most promising sets of the night.

While it may have ended with a St. George scrum rather than a try, it was critical for rebuilding the hosts’ momentums on the subsequent set, where it culminated with Thompson outdoing the Bunnies under Gareth Widdop’s high ball. It was one of the more spectacular tries of the season to watch in slow motion, as Thompson outleaped Sims and several Rabbitohs defenders to twist and crash down from an enormous height with what seemed like half of the players on the field collapsing on top of him, all the while maintaining possession to finally – and almost gently – bring the Steeden to ground.

With Widdop converting moments later, the score was levelled to 12-12 and the Dragons were well and truly back in the game, with the addition of Tyson Frizell shortly before the break providing them with just the fresh pair of legs they needed. In fact, the big man would probably have gone over himself had it not been for a professional foul from Sam Burgess that saw the Rabbitohs forward sin binned at the 36th minute, granting the Dragons a penalty kick and the prospect of a twelve man opposition to bookend the break. 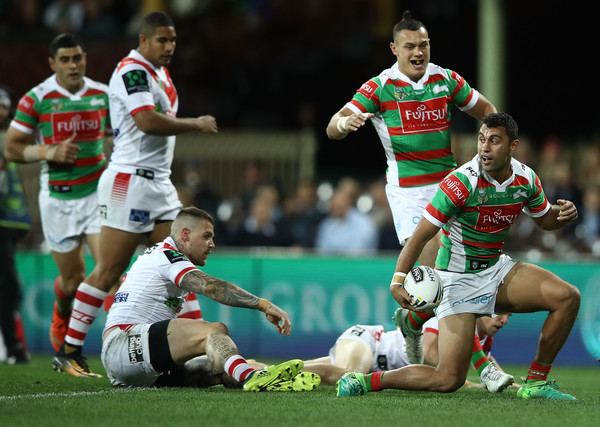 They made the most of it too, with Kurt Mann finally restoring their lead one minute out from the siren. It came off the back of a scintillating run from Nightingale down the left side that made his aborted dash out of the Bunnies’ ten earlier in the game feel like a rough draft. From there McCrone took advantage of the depleted Rabbitohs squad to put some pressure on their left wing, as he opted for a crossfield kick that found Nene Macdonald square on the chest, who managed a deft basketball pass to put Mann over the line.

As fate would have it, the next thirty minutes would pass in a bit of a blur, with each team seeming to gain some headway only to fail to bring it to fruition. Throughout most of the second stanza the Dragons were dominant, so they really should have scored earlier than the seventieth minute, when a punishing run from Frizell through the ruck paired with a deft offload from Dufty to Mann a couple of plays later opened up space for Macdonald to cross for the last St. George four-pointer of the night.

With the score still locked at 24-14 with six minutes to go, it seemed as if the Dragons had to win it, and yet the Bunnies managed one of those bizarre feats of rugby league that makes them so beloved amongst their fans. Just as the rhythm was all swinging St. George’s way, Souths managed to regain possession at the seventy-fourth minute after two successive kicks from Widdop ricocheted off players. It was a bit of a freakish way to get the ball back but, then again, it was that kind of game.

Despite a furious Dragons retaliation, Goodwin managed to keep the ball in play despite being shoved over the sideline, lobbing it over to Johnston who caught it and sent it back to Sutton. From there, the second rower passed it on to Cook, only to eventually double around to receive it from him again and make for the posts, even as Tim Lafai was pulling him to ground, with a dozen other Dragons at his back, stretching out his left hand to put the Bunnies back in the game.

As if that wasn’t enough, Goodwin then brought home the fourth Rabbitohs try off the restart, off the back of a terrific short pass from Johnston that not even a desperate dive from Macdonald was able to clean up. There was no particular set piece or spectacular strategy – just professional football and incisive opportunism up the left edge – which in a way made the Souths win feel all the more accomplished.

To their credit, St. George fought hard in the last minute, managed to get through an entire set and would have scored if a Dragon – any Dragon – had been in place to make the most of Sims’ final offload. Yet Reynolds’ conversion would turn out to be the winning moment, even if the climactic Dragons push made those two points feel even more precarious and hard-won by the time the final siren rung out. From this point out, the Red V are going to have to work overtime to save their season, although it’s going to be just as interesting to se whether Souths can continue this winning streak as they play for pride, rather than points, in the countdown to finals footy.