While the Bulldogs may not be at the bottom of the ladder, they’ve somehow turned into the NRL team with the most existential angst in 2017. With the Knights scoring their first back-to-back win in two years, and the Tigers building to a rousing win against the SeaEagles at Leichhardt, two of the most desperate outfits of the year finally seem to be glimpsing some light at the end of the tunnel. The Dogs, however, haven’t arrived at that point at which they can start to work their way towards a new horizon of hope and aspiration.

In part, that’s due to the continual reconfiguration of the Canterbury-Bankstown spine over the course of the year, which was only exacerbated by a calf injury for Josh Reynolds early in Thursday night’s game against the Rabbitohs, resulting in Will Hopoate at fullback, Matt Frawley at five-eighth, Chase Stanley at halfback and Moses Mbye at hooker – a combination that nobody would have been able to predict earlier in the season.

Speaking of Reynolds, it was pretty sobering to see him sitting, head in hands, as the game continued without him, since this can’t have been the way he wanted to leave the club that’s turned him into such an iconic footballer. So dejected was his body language that I wondered whether he was also thinking of all the Bulldogs players that will be departing Belmore at the end of the year, as every game brings us closer to the end of what once promised to be a new Canterbury-Bankstown generation.

While the Dogs have had more disappointing losses this year, then, none have been quite so melancholy or mournful as Thursday night, not least because the Bunnies were fresh off their rousing win against the Dragons last week and Michael Maguire was celebrating his 150th game as coach. Yet that’s not to say that the Rabbitohs didn’t take a while to warm up, with Adam Reynolds’ kicking game leaving a bit to be desired in the opening twenty minutes, and two successive sets posing a particular challenge for his boot.

In the first, he kicked to the right wing only for it to soar over the dead ball line, a bad enough move for a fifth tackle option, but even worse on the third. To add insult to injury, the Bunnies were just starting to amp up the pressure on the Bulldogs, thanks in part to a punishing run from Tom Burgess that almost put him over the line from fifteen metres out, as if in a pointed riposte to Mark Carroll’s comments during the week. Yet that momentum had all but dissipated by the end of the following set, when Josh Morris caught Reynolds’ high ball so effortlessly in goal that it almost felt as if the Bunnies’ halfback had kicked directly to him, with Morris simply standing still to take possession for a seven tackle set.

Nevertheless, the Rabbitohs felt like the dominant team once they got into gear, with Reynolds eventually bringing home one of the most elegant and dexterous try assists of the season later in the game. Five minutes in, Bryson Goodwin put down the first points, thanks to a great pass from Alex Johnston who saw that his winger was somehow unmarked, in a real indictment on the Dogs’ defence, especially given that the Bunnies’ left edge have been responsible for well over half of their tries during the 2017 season.

Twenty minutes later, Alex Johnston went over, off the back of a line break from Damien Cook right out of dummy half that sent his fullback straight between the posts. In a way, it felt like a continuation and completion of the Rabbitohs’ drive at the line on the previous set, which had started with a similar run and line break from Angus Crichton, followed by a pass that didn’t quite find Cook in time. After a spotty couple of minutes, it was clear that the Bunnies were finding the confidence to self-correct, providing them with the momentum they needed to prevent the Dogs putting down a try before the half time siren.

As it turned out, Canterbury-Bankstown got quite a bit of possession and field position in the dying minutes of the first stanza, but that just made the payoff seem even more lacklustre. One minute out from half time they were granted a penalty and opted for another set, at the end of which they received a penalty – after the siren – and opted to kick for goal, in one of the most anticlimactic two-pointers of the season. For my money, it would have been better to run the ball, since even if they’d come away with nothing their effort would have kept them hungry, and more desperate across the second stanza.

That said, the next forty minutes were kinder for the visitors, with Chase Stanley making the most of Matt Frawley’s boot to smash over two minutes in, for only the fourth Dogs try off a high ball this season. Given Stanley’s history of injury, and the melancholy two-pointer that ended the first half, it was possibly the most rousing try of the night so far, and yet when Raymond Faitala-Mariner coughed up the Steeden on the next set the Dogs just seemed to be back where they started. 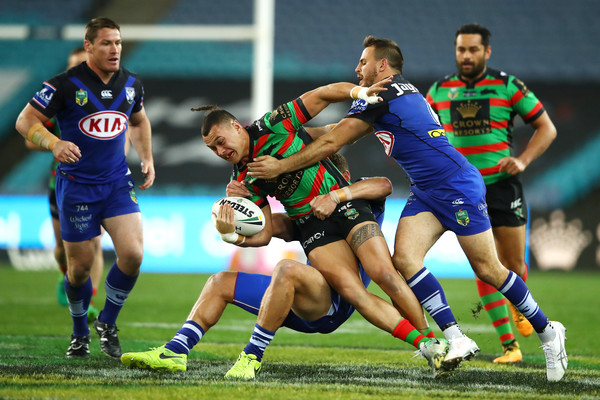 The Bunnies knew it as well, with Alex Johnston taking advantage of the disarray following Faitala-Mariner’s cough-up to put down his nineteenth try of the year, off the back of yet another inability from Canterbury-Bankstown to read the defence. If things had gone to plan we should still have been in the Dogs set, and I can’t have been the only person who was wondering whether the Rabbitohs fullback might be in for another crazy string of tries in the back end of the game. 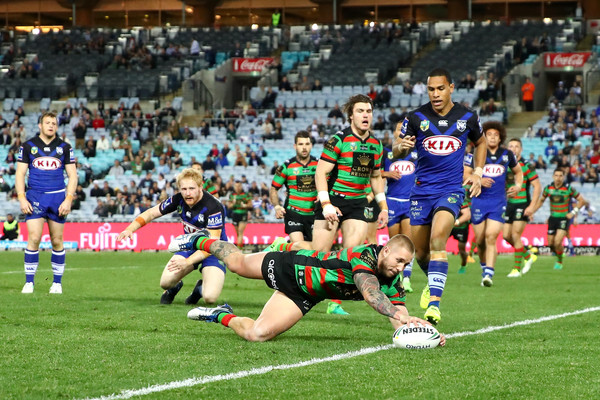 Yet as fate would have it the Bunnies only scored once more, four minutes later. At first, this felt like the four-pointer destined to break the game open for Souths, yet it turned out, more simply, to be the four-pointer that won the game. While it was Aaron Gray who crashed over, full credit has to go to a pitch-perfect try assist from Adam Reynolds. Straightening up the play, Reynolds could have opted for a short pass to Crichton, but instead went for a long one to Gray, sending the ball spinning across Josh Morris’ chest to find his centre with utter precision, and set himself up for an effortless conversion a couple of minutes later. 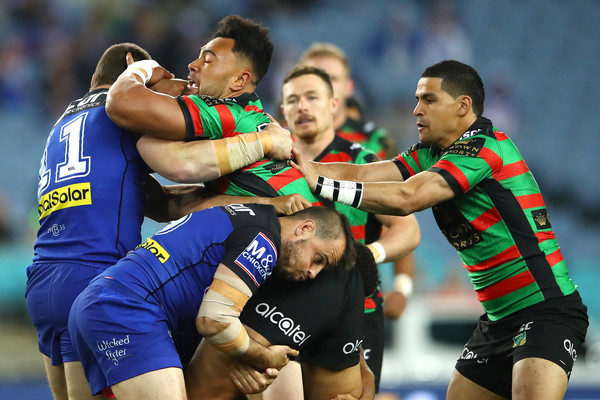 It was a display of dexterity that the Dogs couldn’t possibly hope to rival, especially with yet another comparatively new spine. Instead, the most they could bring to the table was brute force and raw spirit, so it felt right to see James Graham cross over twenty minutes later for his first try in forty-three games. Taking advantage of Sam Burgess being off the field, Graham put on his own slammin’ display, opting for a double right step to break through Cook and get over the line, with a pack of Rabbitohs defenders on his back.

Unfortunately for Souths, this was exactly the moment that Johnston revealed his relative inexperience in fullback defence, with the Canterbury skipper taking advantage of the most momentary of gaps to put his team back on the board. Still, it was probably fortunate for the Dogs that the referee didn’t go upstairs, since if there has been a finer line between put down and knock on this year I haven’t seen it, as the ball curled off Graham’s fingers just as the combined weight of the Bunnies’ defence squad brought him to the ground.

From this point out, it seemed pretty clear that Souths had it in the bag, and yet a big opportunity opened up for the Dogs about five minutes from the end, thanks to two calls of six again and a penalty to boot. As they surged at the Rabbitohs line again and again, it became a matter of pride to crash over, even if the fourteen point differential made it unlikely that they would manage to get back in front.

It was particularly dispiriting, then, when Robbie Farah put in a courageous piece of play to finally regain the Steeden, coming up for air with blood on his face but also having prevented the Dogs from stamping their signature on the last minutes of the match. Nevertheless, this final surge was also a testament to the passion and determination of Canterbury-Bankstown since this is a team that clearly wants to win, even if they haven’t currently got the structure to back it up – and it’s that pride that will need to sustain them as they take on the Sea Eagles, Titans and Dragons over the final three weeks of the 2017 season.