Heading into Round 25, last Friday’s match against the Cowboys initially promised to be just what the Tigers needed to round out their 2017 season with a bit of momentum. For one thing, this was a home game. For another, the Tigers beat North Queensland at a home game in the build up to last year’s finals – and that was with Johnathan Thurston on the team. While they may have been a bit lucky with that win, it still felt as if it might be enough to motivate them to come through with a victory for their second last game of the year.

As it turned out, North Queensland came home with the win, but even then this was one of the better losses of 2017 for the Tigers, who have experienced a pretty broad spectrum of defeats, from the most depressing possible to – more recently – those in which there has been a bit more of an equal playing field. It didn’t hurt either, that it was Aaron Woods who put down the first points, after dummying and running through the North Queensland defence and then slipping out of a tackle from Scott Bolton, eluding about five other Cowboys defenders in the process. 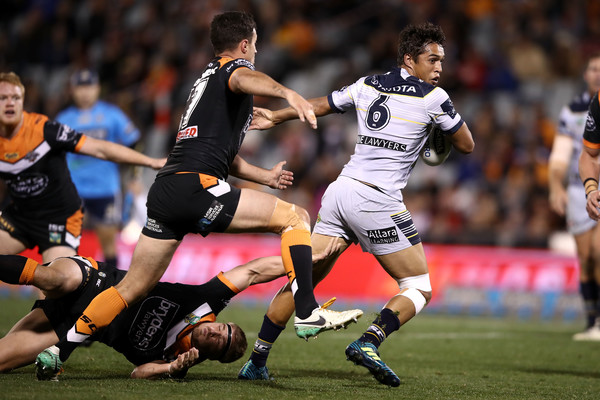 North Queensland hit back pretty quickly, however, with Te Maire Martin crossing over five minutes later off the back of a deft pass from Michael Morgan. Taking his cues from Woods, the young five-eighth dummied and ran between Esan Marsters and Matt McIlwrick, with James Tedesco arriving just a little too late to get a hand beneath him. Martin’s ball handling skills were all the more impressive in that Campbelltown had hit eighty percent humidity by this point, making for a pretty slippery Steeden, and a higher dummying risk than usual.

Between them, Woods and Martin’s tries had roused their teams in different ways – Woods with the assurance that comes from seeing a veteran put down points; Martin with the spirit that comes from seeing a recent addition to the team, and a new generation, make good on their promise. It was clear, then, that the next person to crash over the line would play a major part in shaping the narrative of the game, and so it felt right that it was a player who fell somewhere in between – Josh Aloiai, as crucial in some ways, as Woods, to the Tigers spirit, but as humble and self-effacing as if he’d only joined the club yesterday.

Aloiai’s effort was all the more impressive in that it was a genuine one-man try – a brutal, brave and determined run right through the Cowboys’ defence. Earlier in the game, he’d garnered an important penalty by ploughing at the North Queensland line with all that he had, while his running game was also a highlight of the match against the Roosters last week. Once again, the slippery pitch made it all the more important that the Tigers rely on their big men to make metres, and with their second try from a forward it felt as if they were going to defend Campbelltown to the death.

Above and beyond the points scored, it was also a great example for the team to see that kind of hard work ethic, especially from a player who will be sticking around next year, and especially for the new breed of Tigers who will be there to build a platform off his bulk. Few images have summarised the best side of Leichhardt this season like Aloiai in the moment after he emerged from the tackle, since with blood pouring from his nose and his face utterly exhausted by his effort, it was palpable that he’d exerted himself harder for those four points than just about any tryscorer over the course of 2017.

In such a low-scoring game, every try accrues more significance than normal for the set, or even the couple of sets, that precede it, and Friday night’s game was no exception, with Malakai Watene-Zelezniak’s final four-pointer seeming to gather up the entire twenty minutes that preceded it. It came an hour into the game, and started with the Tigers regaining possession after a rare miskick from Lachlan Coote tumbled into touch and was met with a good read from Tedesco, who just waited for the ball to bounce over instead of scooping up the Steeden on the spot, biding his time for an extra tackle on the next set.

A couple of plays later, Lolohea got the ball across to Nofoaluma, only for Martin to bump the usually reliable winger into touch with a sharp collision tackle. Yet on the following set the Cowboys were finally called out on their third forward pass of the night – not from Jake Granville, as had occurred the first two times, but from Martin himself. From there, the hosts took another shot at the line, as Littlejohn set up MWZ with a terrific try assist.

In an indirect way, Bayley Sironen also played a crucial role in his debut game, since the fact that he was in front of Littlejohn when he caught the ball meant that the Tigers halfback had to run up to the line and opt for a harbour bridge pass, soaring the ball over to his left winger for what initially felt as if it must be the turning point for the Tigers, even if Lolohea ricocheted the Steeden off the sideposts for the second time in the evening shortly after. 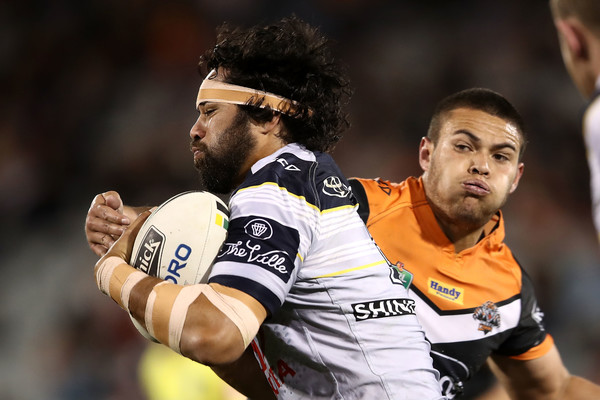 As if aware of the Tigers’ propensity to choke in the dying minutes of the game, North Queensland now mounted a comeback that saw them clock up three more unanswered tries by the final siren. The first came from Kyle Feldt, after Teddy came out from cleaning up a high ball only to find that his team had been dealt a penalty in the process, providing the Cowboys with the field position they needed to put themselves back in the competition.

If anyone on the North Queensland side can be guaranteed to put down points at the eleventh hour it’s Kyle Feldt, so it felt almost inevitable when he crashed over shortly after. While Feldt’s speed at close range is never in doubt, full credit has to go to Coote too, who made up for the spotty kick that preceded the earlier Tigers try by now moving forward into the hosts’ defensive line to pop the ball back to his winger at just the right moment for Feldt to run straight through MWZ as if his the last four points for the hosts had never occurred.

One try from Feldt late in the game is always a momentum-changer, but two is almost a match-winner, and so it was here, as the lanky winger crossed over again on the restart two minutes later. It came off the back of a long, limbre grubber from Michael Morgan twenty metres out from the tryline (and from the sideline to boot) paired with an outstanding kick chase from Feldt himself, in what initially looked like nothing more than a bid at another goal line dropout, until the Tigers saw him slam past them and ground the Steeden just before it skidded into touch.

As a try disguised as a goal line dropout it was arguably as effective as Mitchell Moses’ dummy run and Michael Jennings’ stealth move against the Broncos the previous night – a display of ingenuity that seemed to destine the Cowboys the win if they could only maintain their concentration. The game felt done and dusted, then, when Michael Morgan crossed over five minutes later, thanks to North Queensland’s best set play of the night.

In the final touch to his team’s late resurgence, Granville scooted around to one edge of the ruck for a low kick as Morgan circled around to the other side to catch it on the full and ground it in the same swift movement. For the visitors, it must have been cathartic after last year’s loss at Leichhardt, while a win without Thurston is always a cause for confidence. Yet this wasn’t a really bad loss for the Tigers either, and they’ve got a good chance of ending the year with a bang if they tighten their discipline against the Warriors next Sunday, for what promises to be a galvanising home game at Leichhardt to send out the 2017 season.