It was always likely that the Broncos would win over Penrith for the second round of finals footy, especially at Suncorp Stadium. Yet the Panthers’ win over the Sea Eagles the week before had been so rousing that it was still pretty anticlimactic to see them come away with only one try, even if the Broncos only managed to bag two in the process. Sometimes one unlikely victory can give the team the motivation and self-belief to bring home another unlikely victory, and for a moment there I wondered whether the Panthers might also be in for the fairytale trajectory that has guided the Cowboys so far this finals season. 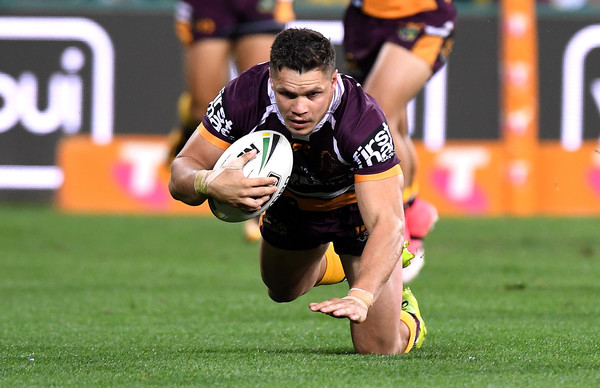 It didn’t take long for the Broncos to settle into their groove and game plan, and seven minutes in they scored points in the most predictable way – from Corey Oates out on the wing. It started with a dummy, skip and run from Ben Hunt to find Oates on his outside, with the winger then dashing between Nathan Cleary and Dallin Watene Zelezniak, both of whom were taken by surprise, and clearly expecting Hunt to feed the Steeden to the other side of the ruck. 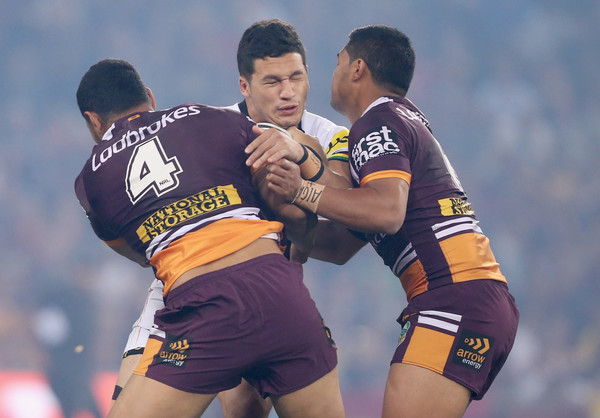 While Dylan Edwards may have managed to get Oates to ground five metres out from the line, his marked man was close enough to retain possession, stretch forward and ground the ball while the Penrith fullback still had him around the ankles. After a couple of messy kicks from Benji Marshall earlier in the game, it was an important display of assurance from the hosts, and all the more dispiriting for the Panthers in that it had come off their first really messy moment of the night – an aborted 40/20 attempt from Peter Wallace that Kodi Nikorima regathered to set up the play that got Hunt field position in the first place. 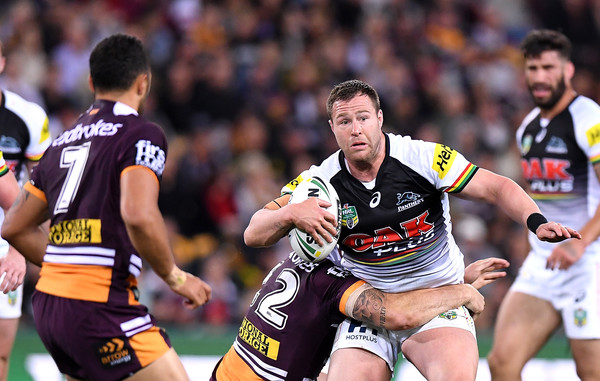 For all the momentum of this early surge, Brisbane wouldn’t score their second and last try until six minutes into the second half, although there were plenty of near-tries from both sides over the rest of this stanza. Seventeen minutes in, a kick from Hunt ricocheted off Wallace’s head and all way back to the ten metre line, where Nikorima scooped it up and eluded tackles from both Cleary and Waqa Blake to bring it forty metres back down the field before finally being dragged into touch by Corey Harawira-Naera – an incredible piece of play from the stand-in Brisbane fullback, and an important show of strength in the absence of Darius Boyd. 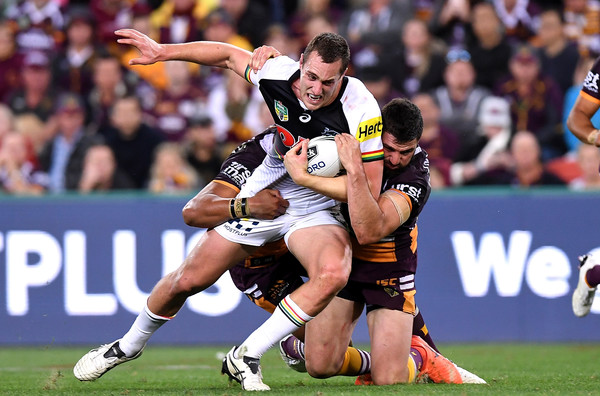 Twenty minutes in, the whole shape of the game was changed by a massive head collision between Oates and Anthony Milford, both of whom were running at high speed, and whose slow-motion slam into each other was as chilling to watch as Will Hopoate’s injury earlier in the year. It was a sobering moment for Brisbane, not just because Oates had to be stretchered off, but because he had scored the first and only try in the game, and had almost scored another so quickly afterwards that it seemed all but guaranteed that he would down more points later in the night. 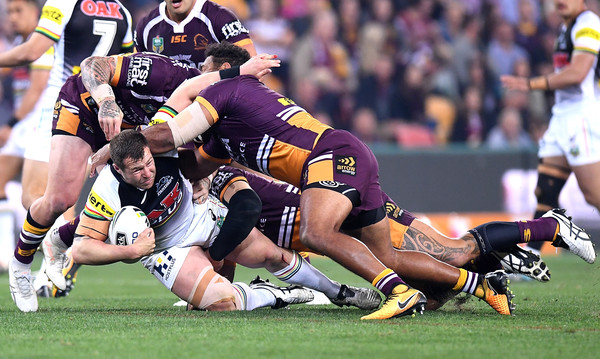 Fortunately for the Broncos, David Mead proved himself more than capable as Oates’ replacement, cleaning up high ball after high ball, and almost effecting a line break and try after transforming another average kick from Marshall into one of Brisbane’s best opportunities in about ten minutes. Still, without the Boyd-Oates magic, the Broncos struggled to score over the first half, heading into the sheds with only a 6-0 lead. 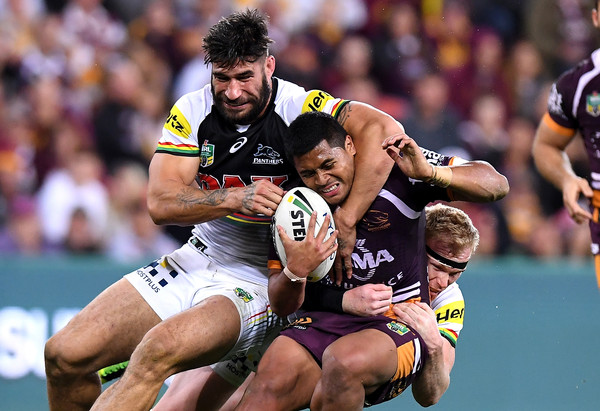 Despite losing Oates, Brisbane had managed to keep things challenging for the visitors, thwarting two goal line dropout opportunities about ten minutes before the break. In the first Jordan Kahu showcased some brilliant footwork to get out of the in goal area without Tyrone Peachey even laying a hand to him, circling around behind his fellow backrower like the punchline to some rugby league slapstick routine. With Alex Glenn coughing up the ball on the subsequent set, the Panthers finally got an opportunity to implement a dropout, only for Brisbane to opt for a short kick, Bulldogs style, that saw them recover possession of the Steeden immediately. 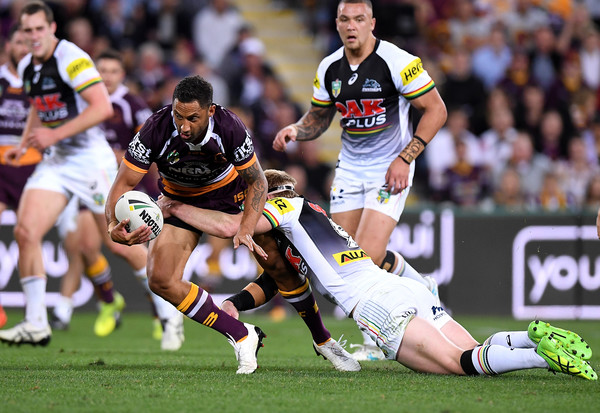 Two minutes before the siren the Panthers had their own injury scare, with Tyrone May being brought to ground with a nasty knee twist just as they’d regained possession. After trying to get to his feet, the five-eighth was escorted off the field to get some strapping, as Penrith anxiously awaited their scrum feed with a minute and a half to go, and Reagan Campbell-Gillard subbed on to help the Panthers rearrange themselves, almost crashing over a couple of seconds later, only for the Broncos’ big men to hold him up right next to the goal posts. 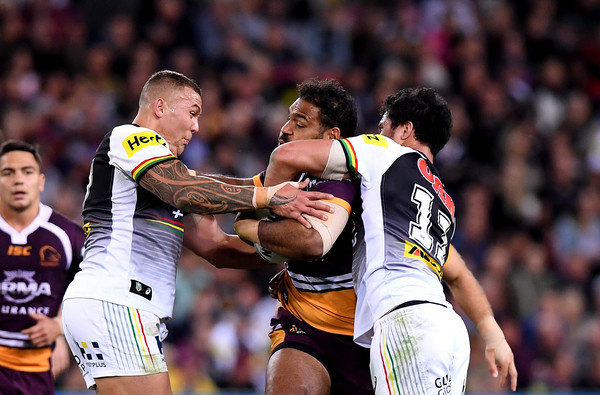 With so much at stake, it was critical that Brisbane put an emphatic stamp on the second half, and so they did, with James Roberts scoring at about the same time that Oates had scored in the first. Full credit has to go, again, to Hunt, who managed a beautiful cut-out pass to Nikorima, with the stand-in fullback then waiting just long enough for Jimmy the Jet to get into position. From there, Roberts did what he does best, accelerating through the narrowest of spaces between Peachey and Josh Mansour before outrunning Edwards for good measure to curve around and plant the ball beneath the posts. 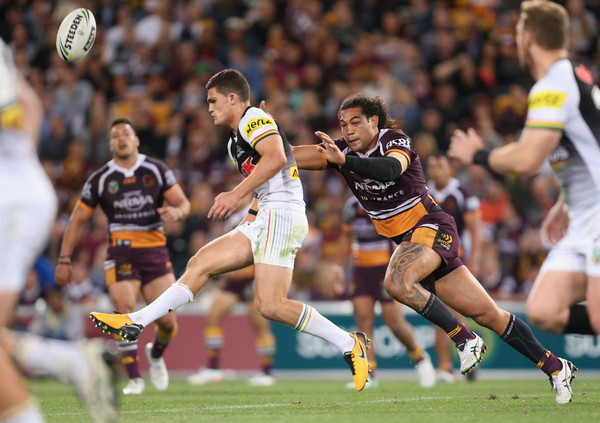 Like North Queensland, Brisbane were now playing finals footy without two of their signature players, so it was a massive momentum shift for Roberts to pull off such a signature move. It didn’t hurt, either, that the Broncos had put down their second try without the Panthers scoring. To add insult to injury, the subsequent Penrith kick went out on the full, making it just that little bit easier for Brisbane to build upon the dominance they’d secured over the beginning of this second stanza. 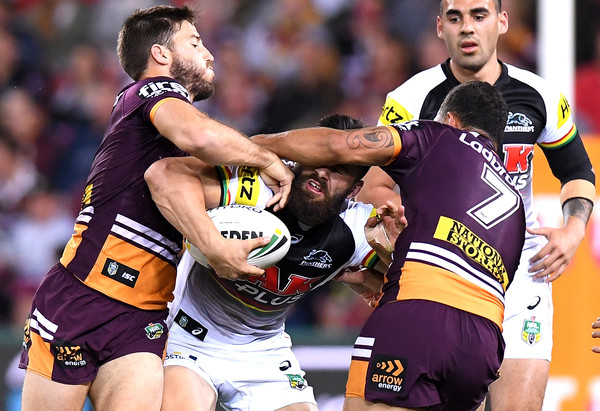 Not surprisingly, the Broncos remained dominant for the next ten minutes, with the Panthers glimpsing their first real shot as the one hour mark approached, after a penalty from Hunt for being offside during a slow play-the-ball finally got them out of their own twenty. From there, they received two more penalties to take them to the other end of the film – the last on Adam Blair for standing in the ruck – and looked set to make good on their field position, only for Campbell-Gillard to poke his nose through the line five metres out and find nobody coming up in support. 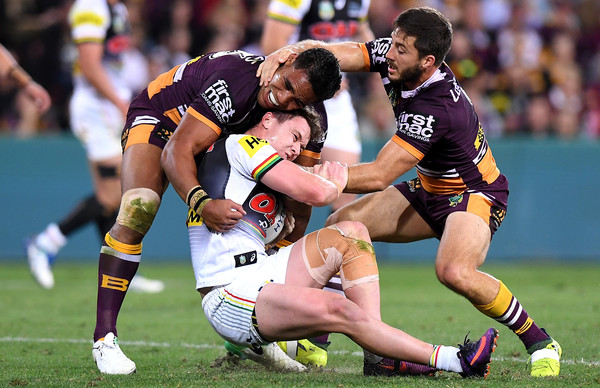 Worse still, Campbell-Gillard actually coughed up the ball as the tackle coalesced, returning possession to Brisbane and sending the Panthers back down the other end of the field. Yet as the clock wound down it felt as if all the visitors really had to do was score one try to get back into the game – Penrith are good at escalating quickly in the second stanza – even if for that very reason Brisbane were even more determined to keep them at bay. 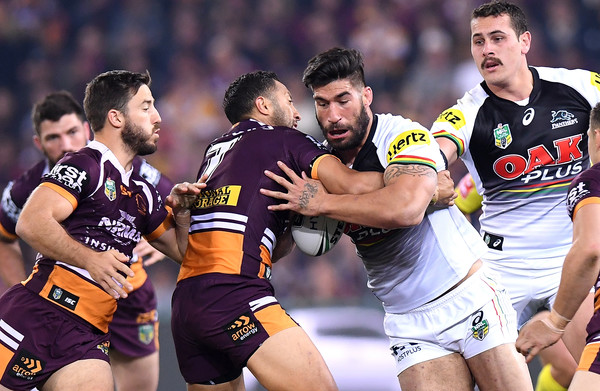 No surprise, then, that the small Panthers contingent at Suncorp erupted when Campbell-Gillard crossed over four minutes later for the first Penrith try and the final try of the night. The previous set had ended oddly for Brisbane, with Glenn initially aiming to offload but dropping the ball and then improvising a kick that ended up returning possession to Penrith anyway. From there, the Panthers ferried the Steeden back down the field, until a terrific offload from James Tamou to Wallace, a quick step from Whare to around Milford, and a deft pass from Cartwright paired with a fairly underwhelming tackle from Thaiday, saw RCG planting the ball squarely beneath the posts. 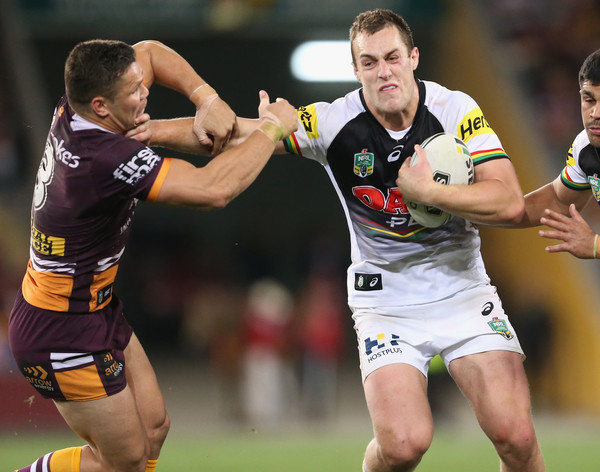 They were assisted by some uncharacteristically sloppy defence from Brisbane, who seemed to segue into slow motion for the last couple of tackles, initially making me wonder whether there might have been some kind of error for Campbell-Gillard to get through so effortlessly. The replay showed, however, that the critical ingredient was the disorienting change in pace from Penrith, who paired a series of rapid runs and kinetic play-the-balls with a more ponderous, deliberate move from Cartwright, offsetting the Broncos’ rhythm just enough to allow Campbell-Gillard to crash over. 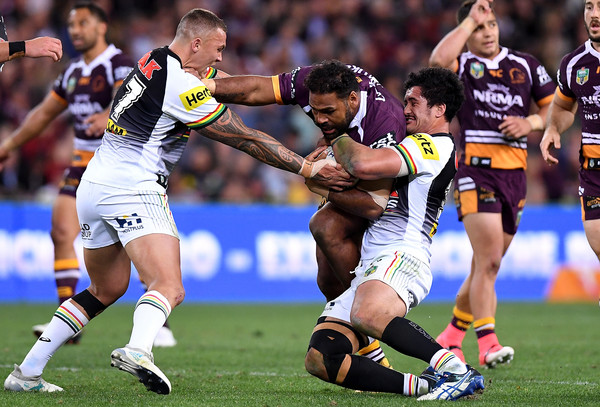 With Cleary converting as seamlessly as he always does, it could well have been the turning-point for Penrith, not least because of the way in which it continued and completed RCG’s truncated run at the line a couple of sets before. The fact that Campbell-Gillard had been brought on in the first place to reconfigure the team around May’s injury also made it particularly cathartic to see him put down points. To make matters worse for the Broncos, the sequel to Thaiday’s tackle was an injury that saw him taken off the field shortly after, leaving them with only Herman Ese’ese on their bench. 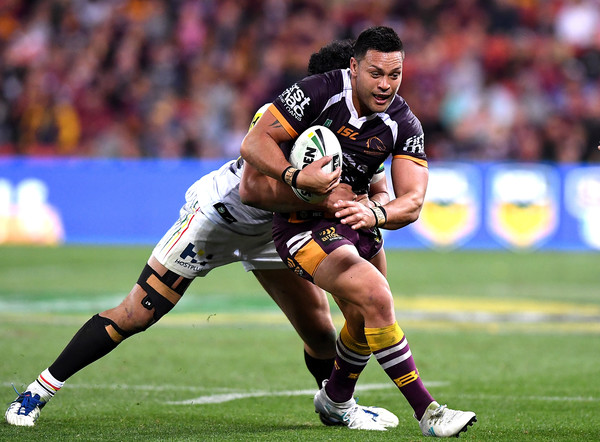 Given that the Panthers have been better than any other team this year for late wins – they’ve averaged more and conceded less than any other during the final twenty minutes – this was quite a precarious situation for Brisbane, inducing Kahu to slot through a penalty goal a couple of minutes later to make their lead just that little bit more secure. As it turned out, these would be the last points of the game, which in some ways felt like one of the most inconclusive and even anticlimactic of the finals season so far. 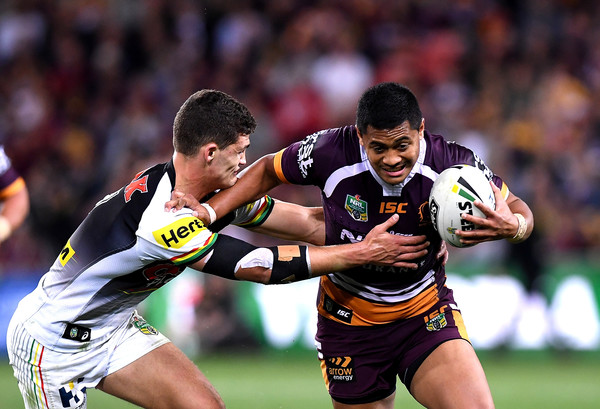 Sure, the Panthers might have lost, but with only a seven point lead, and with Oates and Thaiday taken off the park, it didn’t feel as if the Broncos had won emphatically either – at least not by their standards, especially at Suncorp. They’re going to be more desperate than ever, then, to beat the Storm this Friday night, in a matchup that many of us thought might actually be the grand final, but which some of the freakier wins over the last few weeks – particularly the Cowboys’ resurgence – has relegated to this penultimate match.