The Storm have put down their most emphatic argument for taking home the trophy, with a 30-0 win over the Broncos in what was initially predicted to be the grand final matchup of 2017. It was an even more stunning victory in that the game started with the spottiest fifty minutes for Melbourne in weeks. A solitary penalty goal twenty minutes in and then a converted try right on the half time siren meant that the boys in purple hit the sheds with a relatively tenuous 8-0 lead, and yet that just made their final cascade of points – including two tries from Billy Slater – feel even more cathartic and conclusive.

Conversely, the Broncos really looked like a force to be reckoned with over those first fifty minutes, especially in their scrambling goal line defence, which was often reminiscent of the superhuman efforts of the Blues throughout Origin 1. Six minutes in, Suliasi Vunivalu cleaned up the high ball and put in a quick tap that took him halfway up the field, where Felise Kaufusi found open space, busting through a series of Brisbane defenders only for Anthony Milford to move through a trip and misstep to take him down ten metres out from the line with the ankle tap of the year.

The Storm had built up momentum, though, and a couple of tackles later Cameron Munster found open space right in front of the line, only for Sam Thaiday to put in the second trysaving tackle of the rapidly paced set. With Cooper Cronk kicking wide on the fifth tackle and Vunivalu proving unable to end the six as well as he’d begun it, Brisbane’s goal line defence had paid its first dividends of the night, preventing Melbourne from achieving the early lead that so often seems to get their game in gear at AAMI Park. 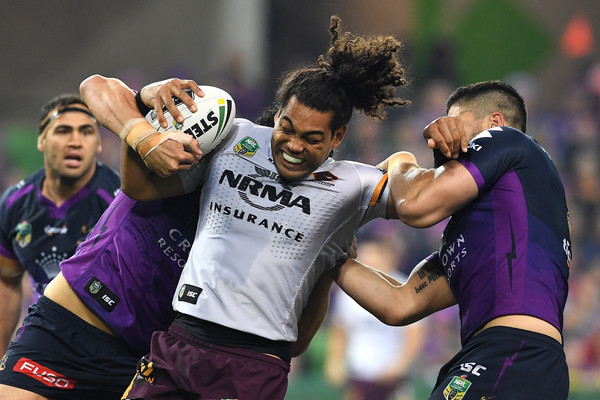 Throughout these opening minutes, the contest between Cameron Smith and Darius Boyd was particularly interesting. On the one hand, Boyd was clearly struggling with his acceleration under the high ball, while Smith was clearly targeting and testing just how far the Brisbane fullback could handle his kicks. Yet Smith’s boot was a bit lopsided as well, resulting in two seven tackle sets for the visitors in the first twelve minutes alone. 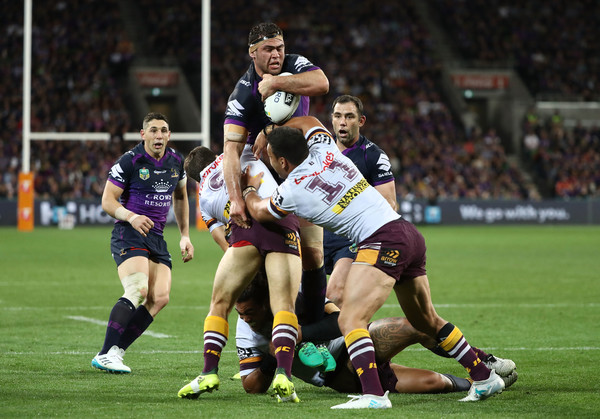 About twenty minutes in Melbourne received their first of three penalty goals for the night (the second and third both came in the final ten minutes). In a pivotal moment, the Storm had garnered some good field position, only for the whistle to blow for what initially appeared to be a forward pass. As it turned out, however, the touch judge was calling out Brisbane for being outside, gaining Melbourne some additional field position, along with all the renewed momentum that comes when a call unexpectedly goes your way. 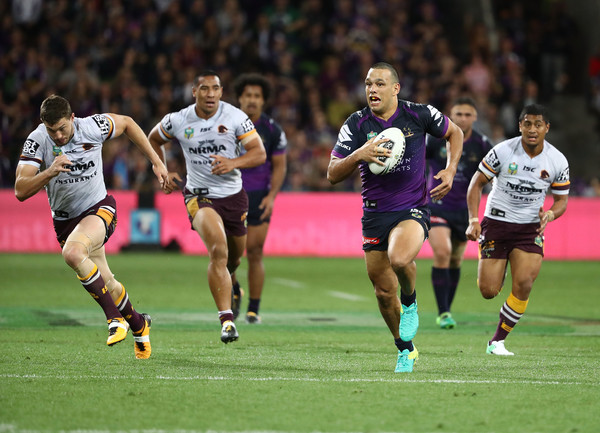 From there, they surged at the Broncos’ line and almost scored, with Munster lobbing the ball over to the left wing, where Josh Ado-Carr would have put down points if he’d been in position. As it was, the Storm got a goal line dropout, and with an additional Brisbane error right in front of the posts they chose to take the two, in what felt more like a converted try than a modest penalty goal. Moments later, they looked poised to put down their first try, as Tautau Moga tried to intercept a Melbourne pass only to bounce the ball back to Will Chambers, who found open space and then sent it across to Vunivalu, who was completely unmarked. 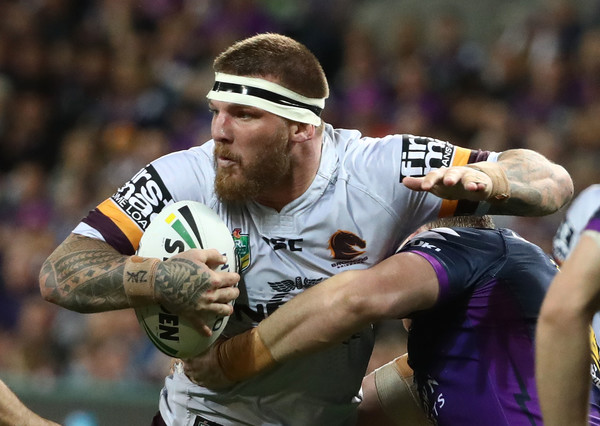 Yet, in one of the strangest spectacles of the Storm’s season, Vunivalu then proceeded to drop the ball so quickly that it almost looked deliberate. More a bounce than a drop, it was as if the Melbourne flyer had been momentarily transplanted to the match between the Crows and the Cats taking place simultaneously at Adelaide Oval. Four minutes later, he compensated – partly – by knocking the ball out of Corey Oates’ hands just as he was about to score in the opposite corner, as Melbourne’s two point lead started to feel more and more precarious, and the home crowd grew more and more agitated. 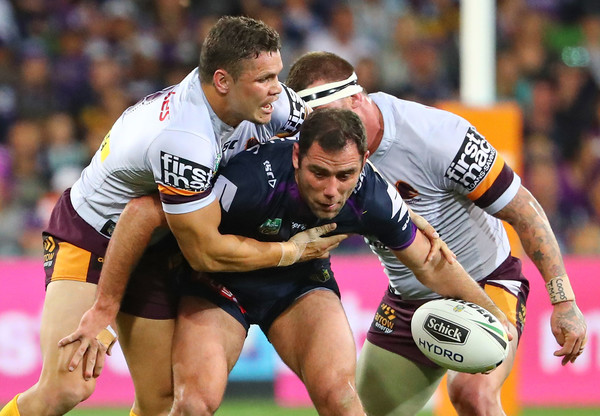 If that weren’t enough, Moga then pulled a Jarryd Hayne in Origin 2, slamming through three Storm defenders right on the line despite the fact that Oates was unmarked on his left, and coughing up the Steeden in the process. Animated by all the tries that should have been scored by this point – and the fourth seven tackle set granted by the Storm – both sides became more desperate to put down points, in some of the most convulsive minutes of finals footy so far.

So cathartic was it, then, when Ado-Carr put down points just before the half-time siren, that it was almost as if the Storm had won the game. Facing their predicted grand final partners, Melbourne had been more nervous and distracted than usual, and that distraction had intensified as the game had remained tryless, with Smith apparently compensating by barking out instructions in the sheds that silenced even Craig Bellamy. It must have been good for him, then, to have this prelude to the tryscoring bonanza of the second stanza, and proof of what the Storm can do when they really put their mind to it. 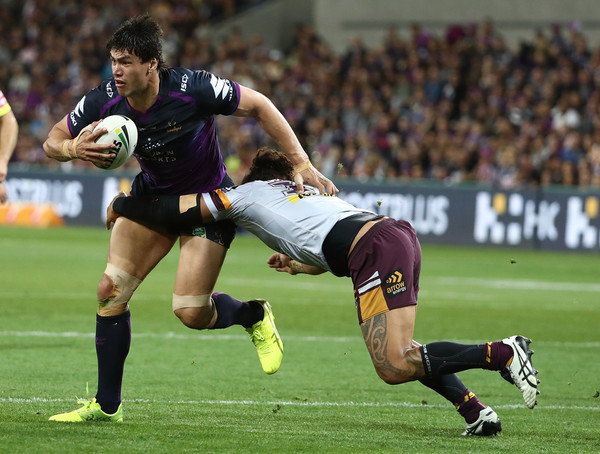 The points came off the back of a terrific dodging, weaving run from Curtis Scott, followed by the best offload of the night so far to Ado-Carr, as three or four Broncos defenders crashed onto the young centre’s back. From there, the Fox put in a deft left step to storm down the side of the field, leaving Brisbane with no chance of catching up with him, and transforming Melbourne’s two point lead to eight points once Smith had converted.

It was to be the beginning of a Melbourne landslide, but the purple army wouldn’t start their burst to the final siren until a good hour in, reserving nearly all their pointscoring for the last twenty minutes. Even then, though, there were warning signs for Brisbane, especially around the fifty-three minute mark, when Slater chased down the Steeden in the Broncos’ in-goal area and somehow managed to curve his entire body around the ball and keep the converging Brisbane players at bay without knocking on and granting the visitors a goal line dropout in the process.

For my money, Slater had never been better returning this year than in this single, stunning moment, so it was doubly dispiriting for the Broncos that their own fullback was led off the field seconds after, as Boyd limped off after fifty-three of the most valiant minutes of football we’ve seen so far this year. Despite the stoppage in play, Slater was clearly pumped, so it was almost inevitable that he would put down the next try, a mere seven minutes later, cementing and consolidating the incredible comeback that has been his 2017 season. 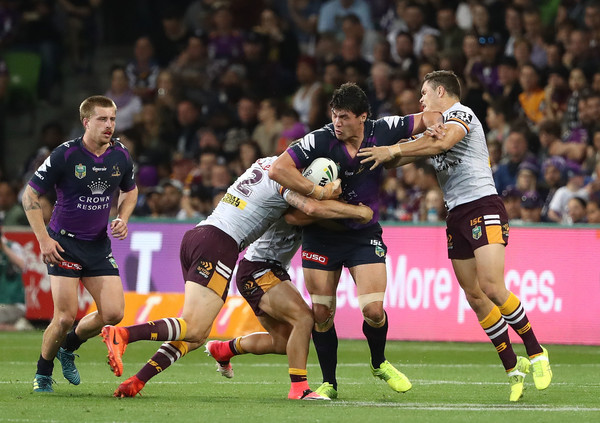 Simple and clinical as the best Storm tries always are, it came off a long pass from Smith to Cronk, a short pass from Cronk to Kaufusi and, then, finally, an inspired offload to put Slater in open space. Full credit to Jordan McLean for the brutal run that got Smith in position to pass to Cronk in the first place, but there was no doubt that this was Slater’s try – a testament to his unique capacity, at fullback, to thread all the movements and inspirations of his team into one single terrific bid for points.

Seeing Slater at his best has been particularly galvanising for the Storm this year, for obvious reasons, and there is no doubt that it generated the momentum that got Nelson Asofa-Solomona over the line six minutes later, off the back of a set that actually started with him getting Melbourne up the Broncos’ end with one of the best runs of the night. A couple of tackles later, Smith opted for a deft set play, drifting across field to isolate Kodi Nikorima and force him to go up against Asofa-Solomona after a stealth pass to his inside man.

It was a David and Goliath contest in which Goliath won, with even the mass of Brisbane defenders who surged into assist Nikorima unable to prevent Asofa-Solomona slamming over and setting up Smith for the 1000th goal of his career. The fact that it was Asofa-Solomona who crashed over was especially cathartic for Melbourne, given that he’d almost gifted the Broncos their first try of the night by mishandling the Steeden immediately after the kickoff that opened this second stanza.

By putting down what was probably the matchwinning try, he erased all but the faintest memory of the Storm’s unexpected vulnerability over those opening minutes, while their uncharacteristic scrappiness over the opening half might as well have been another game by this point. From here, they would gain two more penalty goals in the final ten minutes – one right on the siren for good measure – and yet the conclusion to the night was undoubtedly Slater’s second try nine minutes out from the end.

As so often happens when the Storm have hit their groove, these final four points came off a similar combination to an earlier try, with Kaufusi passing to Cronk who then sent Slater into open space. If last week marked the point at which Michael Morgan finally filled Johnathan Thurston’s massive boots, then this last try cemented Slater’s long journey back to first-grade football after the frustrations of 2016 – at the very moment at which he found himself scoring in tandem with Cronk for the last time at AAMI Park. 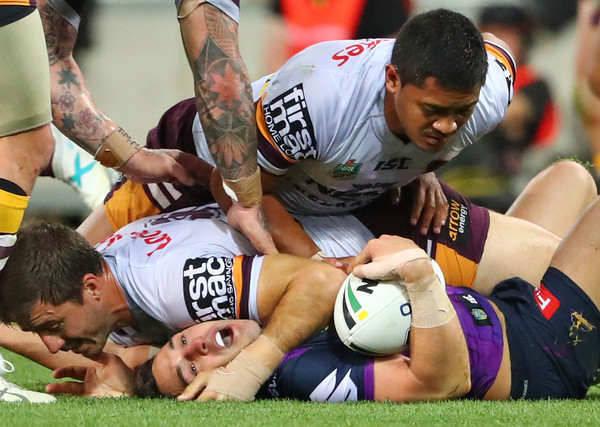 In other words, Friday night’s game wasn’t merely another Storm win, or even another decimating Storm win, but a legacy Storm win. Between Slater’s triumphant resurgence, Smith’s 1000th goal and Cronk’s final home game in Melbourne, the team’s spirit was stirred more than usual, even for finals footy – and that spirit is going to be every bit as important as raw talent when it comes to taking on a Cowboys outfit that have made it all the way from the bottom of the ladder to the grand final on spirit, determination and self-belief.