Along with Lebanon and France, the clash between Ireland and Italy was probably the most evenly matched contest of the 2017 Rugby League World Cup, and the first real upset of the series, since if the Italians hadn’t had two tries disallowed in the first ten minutes of the second stanza they would have given Ireland a serious run for their money. Conversely, while the Irish put in a terrific game, this wasn’t the barnstorming display of dominance that we saw from Papua New Guinea, Samoa or Fiji, which is to say that the Irish weren’t necessarily guaranteed a try every time they glimpsed a bit of open space, put a bit of pressure on the Italians, or gained a succession of penalties.

A good discriminator came around the eighteenth minute, when Michael McIlorum put Louie McCarthy-Scarsdale into open space, allowing the St. Helens forward to burn up the left side of the field, where he would have certainly scored were it not for a terrific trysaving tackle from James Tedesco, and Teddy’s first really emphatic statement of the afternoon. 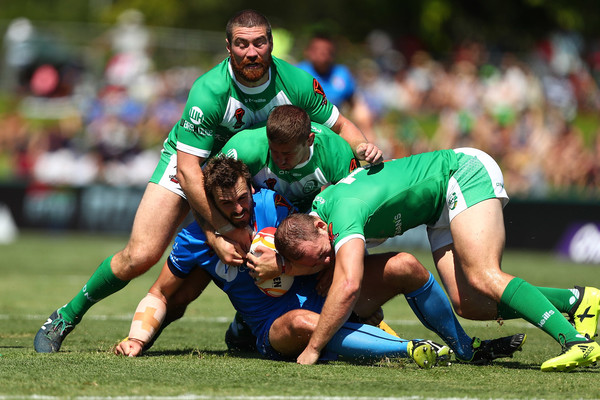 Slamming in low, even Tedesco was unable to stop such a big player moving at high speed, but he could ensure that McCarthy-Scarsdale’s pass to Scott Grix was dishevelled enough to move forward – a trysaving bit of play that we simply didn’t see executed so well under clutch situations in the previous three games. As a result, there were longer gaps between tries here than any game of the world cup so far – twenty minutes in the first half – and that alone helped to build some genuine suspense, making it feel less inevitable that Ireland would score or even win, especially over the first forty minutes of the match.

That said, Ireland did put down points as quickly as any of the other dominant teams, racking up their first try three minutes in. It started with Jack Johns holding onto Liam Finn too long on the fourth tackle – the first of several moments across the afternoon when the Italians would be disoriented by the speed and precision of the Irish play-the-balls. From there, a superb pair of cut-out passes from McIlorum and Finn set up Grix for the short pass that sent Liam Kay over for the opening four-pointer of the day. 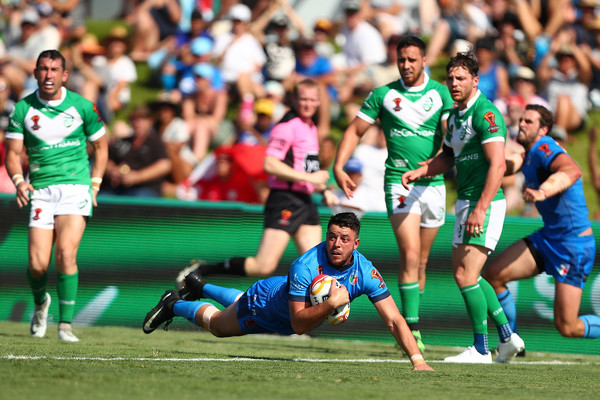 Finn, in particular, showcased some beautiful timing, drifting and waiting just long enough to force the Italian defenders to commit before slotting the ball over to his hooker, as well as adding the extras a couple of minutes later, for the first in an impressively consistent series of conversions. Putting down a try before the other team has even touched the ball is always a momentum-builder, and there’s no doubt that the elegance and economy of these opening six points set Ireland up for the stunning game that followed.

Seven minutes later, George King scored the second Irish try and, once again, it came off the back of a penalty, although this time the set started awkwardly for the Irish, with a bouncing pass and clumsy play-the-ball lulling the Azzurri into a false sense of security. At the last moment, however, the hosts put in a brilliant set piece, as McIlorum opted for a short, oblique kick half a metre out from the try line right and King ran a sharp diagonal line to slam to earth, catch the Steeden on the full, and then ground it right in front of Tedesco’s face – a nice, short-range sequel to the looping pair of cut-out passes that had set up Ireland a couple of minutes before. 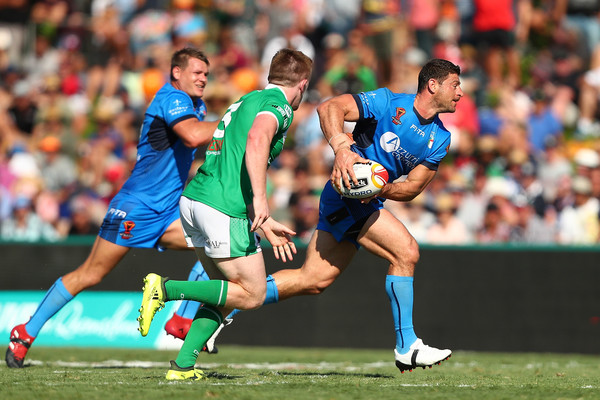 As the half hour mark approached, the Italians started to build a bit of momentum, after Finn tried to clean up a fifth-tackle kick from Johns but dropped it right on the try line, gifting the Azzurri six again. From there, the Italians put in one of their best sets of the afternoon so far, only for the Irish to target Tedesco, who had drifted over to the right edge, and shut down the play. A penalty on Mark Minichiello in the ruck a tackle later got the hosts back down the other end of the field, where Anthony Mullally almost strode over Paul Vaughan to get across, before sending the ball back to about fifteen metres out from the line.

Across the game, the Irish had opted for a very calm, methodical, and serene style of play – it seemed to be their way of dealing with the unfamiliarity of playing rugby league in such sticky, tropical conditions, and was certainly a more convincing strategy than Wales had brought to bear upon Port Moresby. That cool, calm quality only seemed to intensify in clutch situations, so it felt apt that they now more or less replicated their opening four points – developing a new formation would have expended too much unnecessary effort – as a massive pass from McCarthy and a dexterous cut-out pass from Finn set up Grix for a short ball to Kay to cross over once again, with Finn also adding the extras for a third time. 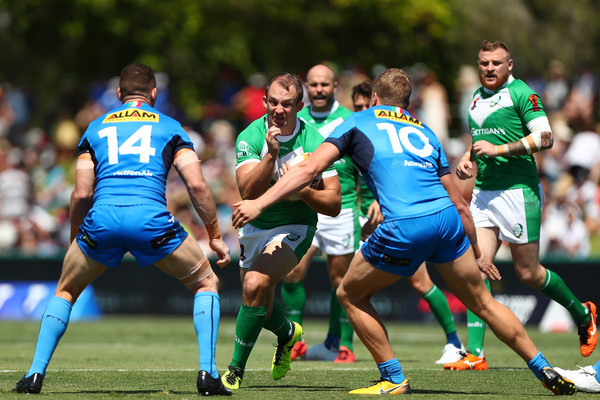 It felt like a potential game-changer, then, when the Azzurri put down their first try of the afternoon two minutes before the break, as Justin Castellaro intercepted a last-tackle pass from Grix to dodge between Michael Morgan and Kay, run two-thirds the length of the field and ground the ball right beneath the posts, setting up Josh Mantellato for the easiest conversion of the afternoon. One of the unusual aspects of the Rugby League World Cup is that it is both more global and local than the regular NRL or Super League seasons, and no opening try quite epitomised that like this one, put down by a local Northern Pride icon playing for his European country at his home ground of Barlow Park. 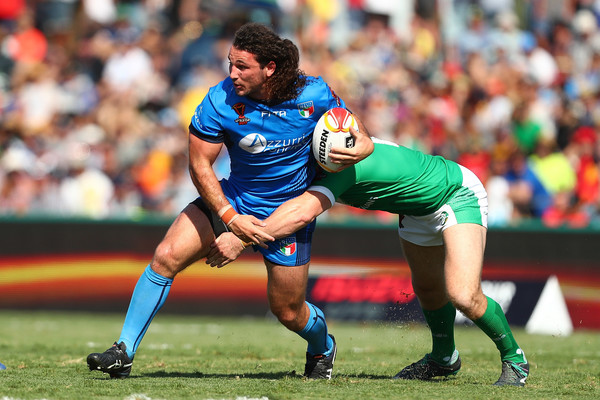 By contrast, the second stanza started with the most disappointing sequence of the afternoon for the Italians, off the back of a terrific fifth-tackle chip from Tedesco that found its way to the in goal area, where Grix fumbled it backwards and doubled around to try and clean it up, only to find that Castellaro had got there first. In a heartbreaking moment for the Italian side, however, the Azzurri centre then proceeded to knock the Steeden on himself, seeing a certain try evaporate before his very eyes.

From the very outset, it was clear that the Italians could only win if they managed to make the most of Tedesco, so seeing his skills go to waste here was especially dispiriting, particularly as Johns was led off a minute later with an arm complaint, forcing the Azzurri to reconfigure their spine with a full stanza of football ahead of them, begging the question of whether Tedesco might have a future in the Italian halves in the later part of this World Cup season.

It was all the more cathartic, then, when Nathan Milone crossed over a couple of minutes later, particularly because it started with a deft piece of play involving Tedesco – an offload from Brendan Santi that saw the incoming Roosters fullback dummy left before skidding the other way to gain a good ten metres for the Italian side. Moments later, Mantellato outplayed Shannon McDonnell under the high ball, crashing to ground under the momentum of catching the Steeden, but not without offloading to Milone just before he hit the turf, with the Irish too disheveled at the previous play to form their line in time to prevent the Wests Tigers’ NYC centre slipping through the defence to ground the ball.

Still, the Irish responded in kind eight minutes later, following a particularly dramatic, exciting and convulsive sequence of play. The prologue was intercept and run from McCarthy-Scarsbrook to rival that of Castellaro before half time – a run that would have ended with four points then and there if Mason Cerruto hadn’t chased him down and brought him to ground about twenty metres out from the line.

The Irish had built momentum, however, and a couple of tackles later Morgan slammed through Cerruto in the left corner, only for the replay to reveal that he’d lost the ball in the tackle, and that it was really the downward motion from the Italian winger that had wrenched the ball out of the Irish prop’s hands and got it to earth – a stunning display from Cerruto on the back of his run a minute before. Relief was short-lived for the Italians, however, with Amor putting in a dazzling combination of speed and strength to slam through the Azzurri line on the next set – his strength no match for Tedesco, who he casually fended out of the way, and his speed no match for Nathan Brown, who didn’t have a chance of arriving in time to get a hand underneath the Steeden. 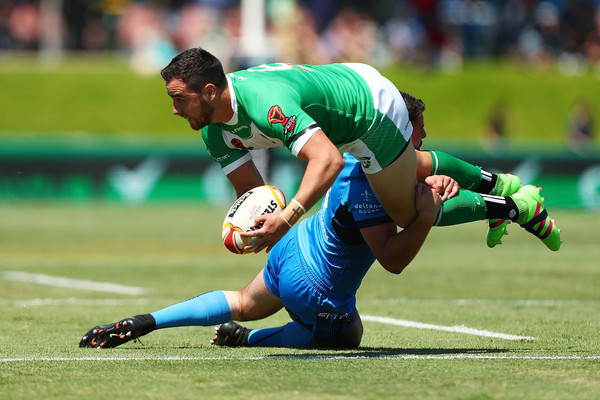 If that weren’t definitive enough proof that the Irish were regaining dominance, then six minutes later, Morgan managed to make good on his botched try, thanks to a deft grubber from Grix right on the line that Tedesco dove for but somehow failed to clean up, slipping onto the field and opening up space for Morgan to scoop it up and crash over. If there was one thing more dispiriting for the Italians than being unable to take advantage of Tedesco’s talents, it was seeing Teddy unable to take advantage of his own talents, especially given how decisively Amor had trampled over him for the previous Irish try.

As a result, this felt like a bit of a turning-point – the moment at which it became clear that the periodic surges of Italian assurance and confidence were probably not going to be enough to win it, especially once Finn slotted through his fifth of five conversions. Sure enough, McCarthy-Scarsbrook sealed the deal one minute out from the end, on the back of a brilliant sequence offloads, a pair of cut-out passes, and a good, hard run over Tedesco and Castellaro, sending a challenge to the Italian camp to make the most of their considerable talent when they take on the United States in Townsville next week.