It was a torrential backdrop to Johnathan Thurston’s testimonial match at Suncorp last Friday night, with the rain bucketing down to make for the wettest pitch, and lowest visibility on the field, since the already legendary Titans home game last year. With Billy Slater out with a jarred shoulder following the World Club Challenge, and Cooper Cronk now firmly entrenched with the Roosters, it was an odd way to see Smith at Suncorp, with the crowd actually – if comically – booing him as he lined up the tee early in the second stanza.

Melbourne put down the first points of the game, thanks to some deft movement on the right edge of the field, as Brodie Croft drew Thurston in from the line and sent the ball across to the wing, where Young Tounamaipea got it to ground. Under these torrential conditions, and staring directly into the floodlight – no pun intended – it was understandable that Smith didn’t manage the conversion, and with 0-4 on the board it felt as if we might be in for a fairly low-scoring game.

So it was, too, with the Storm remaining four points ahead until the Cowboys put down their own try seven minutes out from the half time siren. During that time, the low visibility conditions, combined with the absence of Cronk and Slater, made Melbourne a bit less efficient and clinical than usual. About fifteen minutes in they received a sustained period of field position and possession after Matt Scott knocked the ball on right on their line – a period that in any game last year would have virtually guaranteed them four or six more points.

That’s not to say that they were unimpressive, however, with Kane Linnett needing to put in the trysaving tackle of the first stanza to prevent Curtis Scott getting over the line, while Cameron Munster bent down and almost burrowed through a couple of tackles later. Still, the Cowboys held their own, with Kyle Feldt just beating Josh Ado-Carr to Munster’s grubber at the end of the set, and Will Chambers knocking the Steeden on at the start of the dropout, gifting North Queensland a much welcome let-off after an opening quarter that had seen them trailing 41% possession to the 59% enjoyed by the Cowboys.

Shortly after, Jahrome Hughes was taken off with a shoulder injury that was uncannily similar to Slater’s the week before, making the Storm feel even more provisional in structure and outlook with both their first and second choices for fullback off the park. When they let the Cowboys in, though, it wasn’t with one of their new players, or with a player out of position, but as a continuation of the Feldt-Ado-Carr rivalry that we’d glimpsed during this extended period of possession.

Finding himself wrapped up on the last tackle, Thurston popped the ball backwards, where Michael Morgan linked up with Feldt for a magical reprise of the 2015 grand final, as Morgan booted the ball into the right corner with a kick that initially seemed too long, but which Feldt cleaned up with one of the most prodigious catches I’ve ever seen in a long time – a catch that would have been stunning even in dry conditions, and that had more than a touch of Semi Radradra’s terrific work under the high ball during Parramatta’s torrential fixture at the back end of the 2017 season.

The catch looked even better in slow motion, as Feldt caught the Steeden, right on the tip, in one hand, before gathering it into his chest and then putting it to ground in a movement that was all the more impressive and dexterous for the number of handling errors we’d already seen over the course of the game. Despite hailing from a tropical climate, the Cows tend to be the team most disadvantaged by these kinds of conditions, given the extent to which they like to pass and maximise ball movement, so seeing Feldt able to take control of such a slippery Steeden was an important rallying point for the team as a whole, even if that slipperiness defied Ethan Lowe’s boot a moment after, with the ball ricocheting away to the left of the uprights to keep the score at 4-4.

Nevertheless, it was a good enough try – much more spectacular than the opening Melbourne try – that it would have sufficed for North Queensland to have headed into the sheds feeling on top, even if they’d only levelled the scorelines. They got a beautiful coda a minute and a half out from the break, however, when Thurston dummied to the left and bounced, more than slammed, over the Storm defence, taking advantage of the slipperiness of every surface to reach out his hand and plant the Steeden over the line.

While Lowe might have failed to add the extras once again, the symbolism of Thurston scoring – and scoring at this point in the game – wasn’t lost on the crowd, no matter whether they were North Queensland and Melbourne supporters, and their applause made this the first time in the match that it really felt as if we were watching a testimonial, rather than a regular trial. 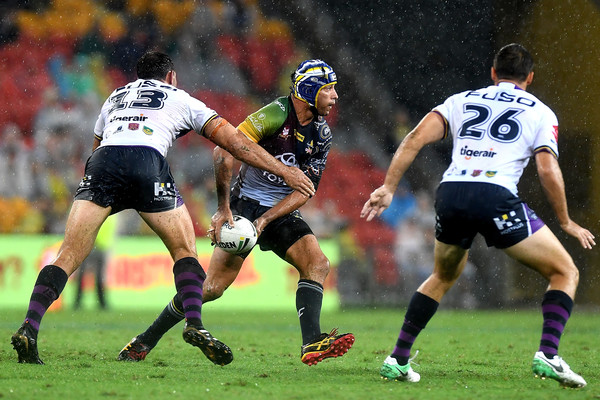 That testimonial quality came into play in a very different – but equally entertaining – way eight minutes into the second half, when Curtis Scott put down the second try for the Storm, thanks to a massive run up the left side of the field followed by a massive fend on Justin O’Neill. While this was quite an inspiring – and, for the Cowboys, sobering – vision of what this Melbourne young gun might achieve in the future, the real highlight was seeing the crowd boo Cameron Smith for the first (and probably last) time at Suncorp, with the sound echoing so resoundingly that you had to think that even the North Queensland fans were in on the joke.

While Smith had some good eyeplay with the crowd, part of the comedy of it all was how much it appeared to take him by surprise, especially since he has a bit of a history with missing conversions when he’s a bit disheveled or distracted. The same happened here, making for the most memorable missed conversion so far in a game that had been defined, in part, by its succession of missed conversion, with both teams looking at a 8-8 deadlock as they entered the last half hour of the game.

If Thurston’s try had been the moment at which this really felt like a testimonial, then this was the moment at which the game started to feel more about Thurston and Smith’s camaraderie – and the crowd’s affection for both – than anything else. Certainly, the spectacle of Smith’s kick eclipsed Scott’s try, and the momentum it would normally have built, which is perhaps one of the reasons why the Cowboys crossed so quickly and emphatically in its wake.

Once again, it came off the back of a Morgan-Feldt combination, with Thurston showing some quick thinking in the middle of the field to start sending the ball over to the right side, and Morgan then running up to the line, and drawing Scott in to commit, before opting for a harbour bridge pass that left Feldt with just enough space to slam over in the right corner. 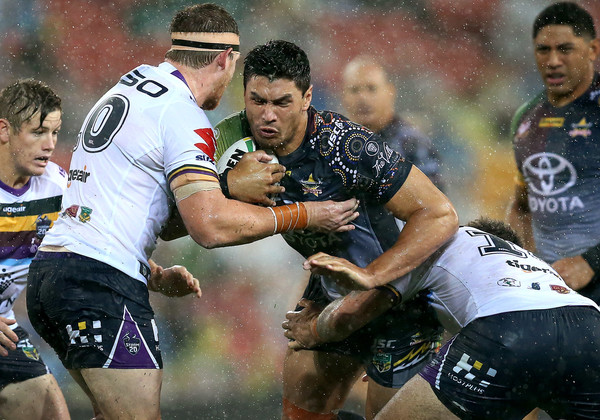 The four points felt all the more memorable in that Feldt now took over from Lowe to convert his own try, and yet as he teed up the Steeden the entire stadium – even the Melbourne supporters – erupted in a cheer that was almost as distracting as Smith’s boo, unsettling him just enough for the ball to bounce off the uprights miliseconds after it looked like we might be in for our first conversion of the evening. With five from five missed conversions, it felt like the absence of two-pointers somehow encapsulated the casual, comic and easygoing vibe of the game as a whole, which almost felt like an Auckland Nines fixture at times in its sense of carnival and fun.

The spectacle continued five minutes out from the end, when Billy Walters put down his first try for the Melbourne Storm, dodging around Thurston to get the ball to ground right beside the posts and setting up Scott Drinkwater for a seamless conversion to put the Storm back in front by two points. While there were a full five minutes left in the game, the fact that Walters had got past Thurston, and that the try had been preceded by a succession of North Queensland penalties and some escalating pressure from the Storm, made it feel like Melbourne might just have won it here, with Cam and JT’s testimonial match set to conclude with yet another affirmation of the next generation of purple army players. 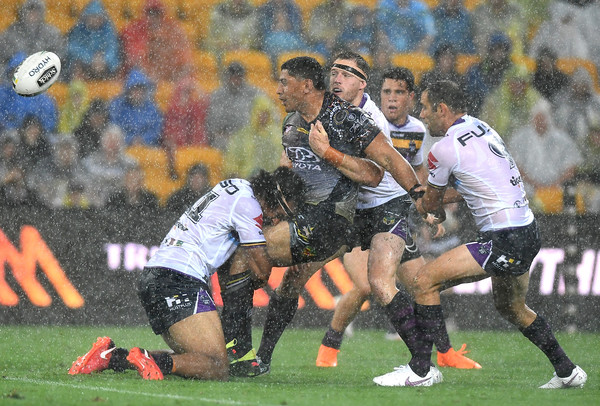 The fact that Drinkwater had booted through the first conversion of the game didn’t help the Cowboys’ case either, and from here their stocks seemed to plummet, with Coen Hess penalised for slipping up the play-the-ball (although you could easily make a case that Justin Olam had held on too long), and Feldt losing the ball after the last kick return, with the Cows scrambling to regather it before the Storm could it up and cross over once again.

Yet that just made it all the more momentous when Feldt and Thurston – the only two North Queensland tryscorers so far – combined once again for a last-minute piece of play that was even more stunning than J.T.’s try in the first stanza. At first, it looked as if this wouldn’t be Thurston’s set, since he was taken down early in the tackle count, but he bounced back and got in position for the fifth tackle option.

From his position and inflection, the Storm were expecting an in-goal grubber or chip, but Thurston instead delivered one of the best banana kicks in years, looping it around to the right side of the field like a harbour bridge pass that had come off the side of his boot – a difficult enough move to pull off in good conditions, but almost impossible in torrential rain. If the kick was amazing, the put-down was just as good, with Feldt catching the ball almost as deftly as he’d landed his earlier bomb, only to bobble it, momentarily lose it, and then regather possession to simply place it on the turf – it was the softest try of the night – under the pressure of the Melbourne defence.

Over the last fifteen minutes, I’d found myself questioning the decision to keep Thurston on the field, but that decision was more than justified in these final moments, with J.T. providing the winning points, but also something more – that almost miraculous ability to wrest leadership and vision out of seemingly impossible situations that not even Michael Morgan, at his very strongest, and for all his brilliance, has quite been able to replicate over the last eight months. Finally, it felt as if J.T. was back, and you couldn’t ask for a better way to conclude a testimonial – with one of the greatest players (possibly the greatest player) in the world putting in one of his greatest moves to date, and a tantalising vision of what North Queensland might manage with him at the helm again this season.