It was desperate times at GIO Stadium on Thursday night, with the Raiders having lost every game so far this season and the Bulldogs having lost every game bar one. From the beginning the intensity was high from both teams, but especially from Canberra, who were clearly determined not be shut out once again at home, with Ricky Stuart making an appearance on the sidelines from the very start of the match. 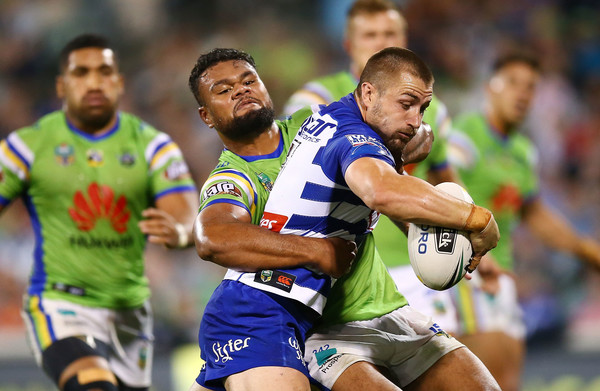 At first, the Dogs looked set to put down the first points, thanks to a sustained period on the Raiders’ line that involved two restarts and two penalties, and saw some of the Canterbury forwards actually crash onto, or over, the line, a couple of times, only to be held up by a sterling Raiders defence. As the pressure mounted, it felt as if the Bulldogs had to score, only for Aaron Woods to knock the footy on during the second tackle of a seven tackle set, in an enormous let-off for Canberra. 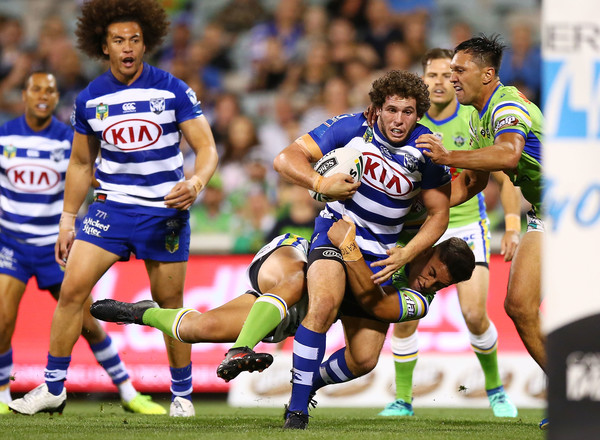 The green machine didn’t take time to breathe a sigh of relief, however, with Nick Cotric showcasing some split-second thinking to clean up the Steeden in-goal, return to the field of play, and then offload it to Jordan Rapana, who slammed up the side of the field with Josh and Brett Morris in hot pursuit. For a moment there, Rapana himself looked set to score, dancing out of an ankle tap from Brett, who caught a boot in the face, and had to be taken off the field a couple of minutes afterwards. 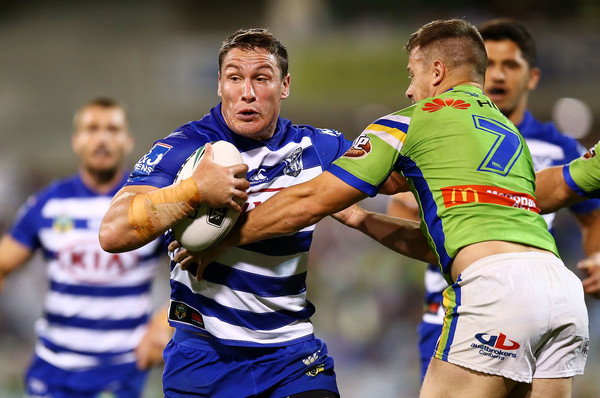 While the Morris brothers may have put in a valiant effort, it was actually Jeremy Marshall-King who brought Rapana’s mad dash to a close, slamming the winger to ground right on the line, but not before the wiry winger had sent the football across to his perennial partner in crime. From there, it was almost inevitable that Joey Leilua would score, so much momentum had Rapana accrued, and so galvanised had the Raiders been by getting out of their own twenty, and sure enough he fended off Mbye and dummied a couple of times before slamming over for the first four points. 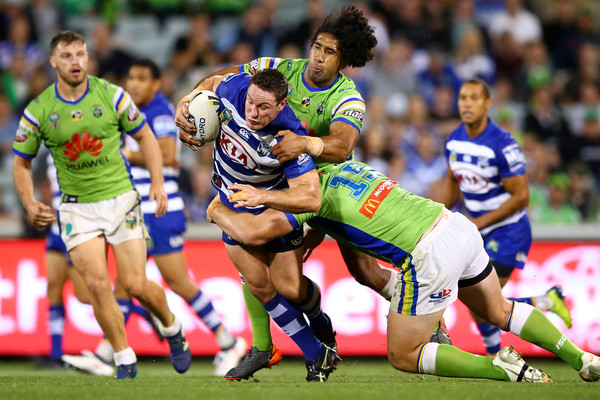 On its own terms the try was pretty magnificent, but the spectacle of Lepana returning to their former glory must have been a welcome sign for Canberra supporters, with Jarrod Croker barely needing to slot the footy through the posts for this to feel like the home team had decisively taken control of the evening. That just made it all the more rousing, then, when Leilua popped over a couple of sets later for a double, on the back of a line break from Jarrod Croker, a pitch-perfect crossfield kick from Sezer and – most memorably – a deft tap back right on the line for Rapana, who set up his buddy to put down the next four points of the night also. 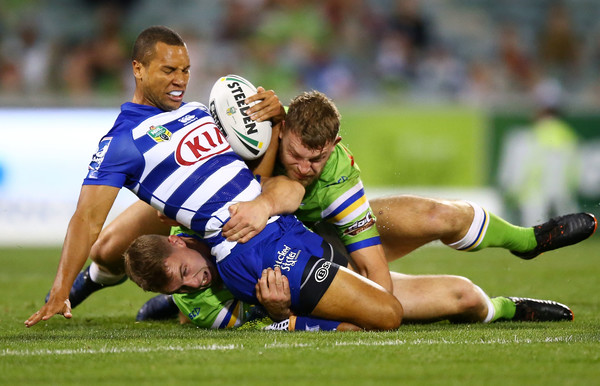 As half time loomed, the Dogs managed to build some sustained possession and field position, thanks to a goal line dropout and then – with fifty seconds to go – a call of six again. Although the Raiders were 12-0, it was still an enormously suspenseful period of play, with several major stoppages, and Olfield and Hingano both sent off with injuries, forcing Havilii to sub back on seven minutes after having hit the bench and forcing Canberra down to fifteen men. While the Dogs had been a lesser team by a long way, keeping them out in these final minutes was still a considerable achievement, and the crowd breathed a sigh of relief when nobody on the Canterbury side was able to get to Foran’s concluding grubber as the siren rang out. 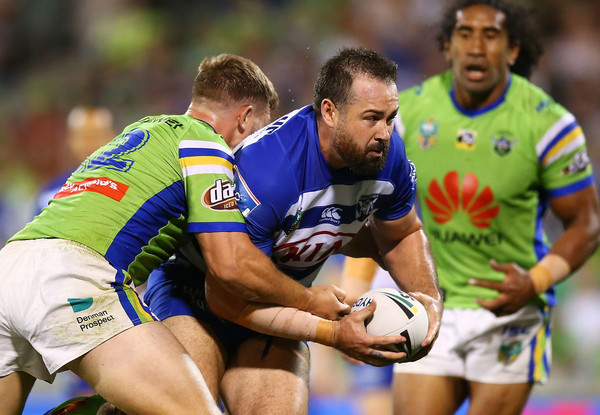 Still, the Raiders were faced with a daunting task during the second stanza, as Croker moved to the wing, Junior Paulo and Shannon Boyd faced the biggest effort of their season so far, and Havilii was confronting with the prospect of significantly extending his game, which had been largely confined to short intervals before this point. They dealt with it well, initially, enjoying a sustained period of possession after they forced Danny Fualalo to cough up the footy at the other end of the field, and gained some extra traction after a penalty on Marshall-King for a hand in the ruck. 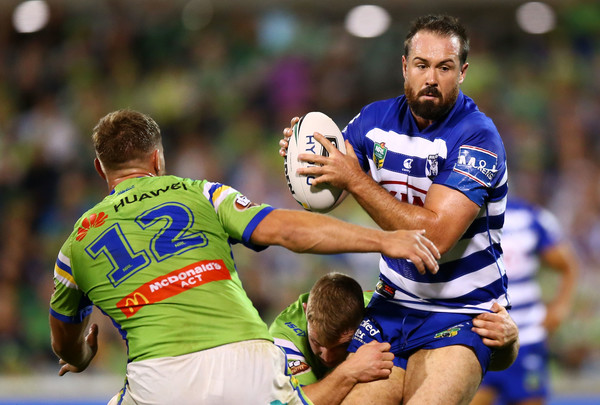 In an inversion of the first half, however, it was the Raiders who now failed to make good on their field position, as the green machine set things up perfectly on the left side of the field only for Elliot Whitehead to drop the Steeden at the critical moment. It was a fumble to rival Woods’ knock-on at the end of the Bulldogs’ opening attack, and had a similarly galvanising attack on Canterbury, and on Foran in particular, who followed up with a terrific, skittering run that might have been momentarily cleaned up by Cotric, but continued a tackle later when the ex-Warrior crashed over off a simple decoy play, with an exhausted Raiders front row barely able to get to him. 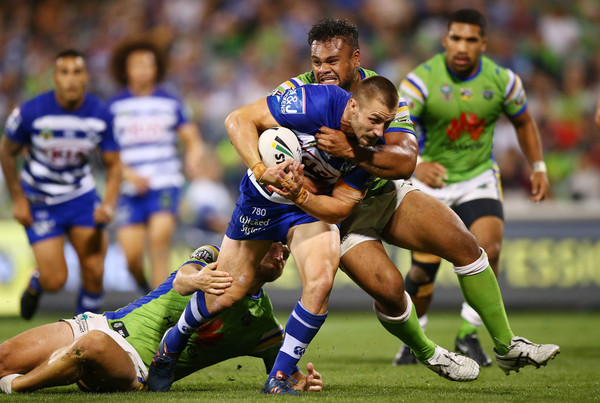 If seeing Lepana sync up had felt symbolic, then seeing Foran finally delivering for the Dogs felt equally momentous, and seemed to dishevel the Raiders much as Leilua and Rapana had unsettled Canterbury in the first half. A moment later, Whitehead compounded his error with a dangerous tackle, while the Bulldogs continued to consolidate, thanks to a crossfield kick from Foran that Will Hopoate caught on the full, lost, and then regathered in both hands, only to just lose it as he tumbled to the turf, one of the most dazzling aerial displays of his Canterbury career. 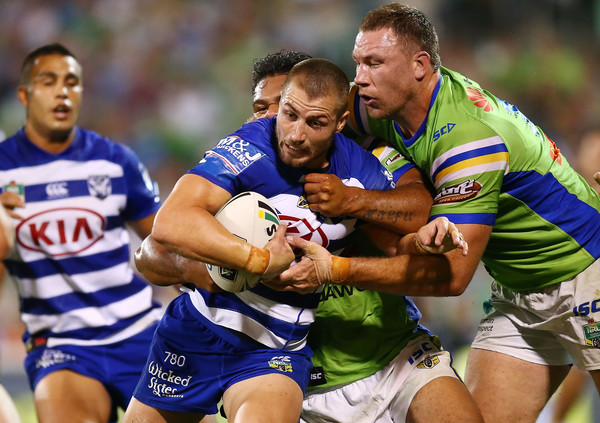 While Hoppa may have lost the football, his synergy with Foran was an indication that the Bulldogs meant business over this last part of the game, and with Williams now taken off the field, and the Raiders down to fourteen men, it was clear that the home team had to come up with something quick, convincing and economical. Amazingly, they came up with it, as a massive run from Leilua and a quick play-the-ball gained them the field position needed for Sezer to put through a pitch-perfect kick for Croker, who gathered the footy on his chest and slammed it to the ground. 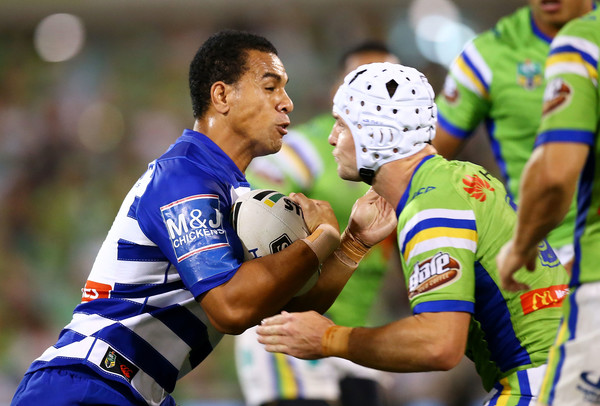 If that wasn’t stunning enough, then Sezer and Croker linked up again once more with sixteen minutes to go on the clock, and while Croker may not have added the conversion this time, he made up for it with a penalty goal a couple of sets later. Not only did their synergy completely overshadow Foran and Hopoate’s momentary linkup, but it was the best possible way for Canberra to acclimatise to their reduced lineup – only Liam Knight was on the bench – with Croker playing as if he’d been a winger his whole career, in a stunning testament to the Raiders’ backline versatility. 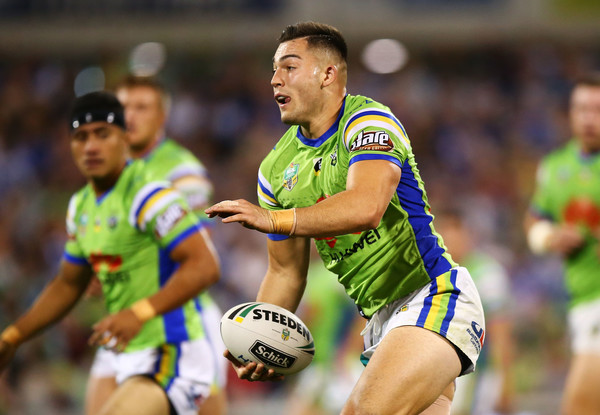 For the last ten minutes of the game, the Raiders were clearly yearned to put down a triumph try – if only to see just how much more flamboyant Ricky’s celebration dance could get – but in the end they didn’t really need it, quadrupling the Bulldogs at 24-6 as the last minutes arrived. With Jack Wighton and Josh Papalii off the field, that was an even more emphatic victory, even if it was against one of the most underperforming teams of the NRL season. With Sezer taken off the field after a late tackle from Josh Jackson at the 78th minute, the Raiders were finally down to thirteen men as Croker set up the final penalty goal to bring it to a stunning 26-6. 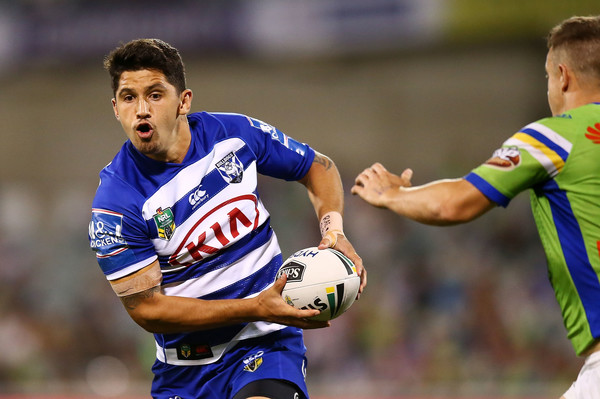 That turned into 26-10 once Morris crossed over in the corner in the final second, but the Raiders were so resurgent by this point that it barely even felt like a consolation try. Already, Canberra’s momentum had taken them onto the prospect of next week, when they’ll be taking on the Eels at GIO once again. If they can come away with another win there – and they should – then they may just have restored the self-belief needed to have another crack at the 2018 season, in what may prove to be one of their most critical and pivotal games of the year if they play it right.