Both the Dragons and the Bunnies were flush with success when they met at UOW Jubilee Oval on Friday night. On the one hand, St. George was high on a perfect winning record so far, a stat that only the Warriors can rival five weeks into the 2018 season. On the other hand, the Rabbitohs had made up for a bit of an inconsistent start to the year with a rousing win over the Bulldogs the week before, as well as an unexpected victory over the Sea Eagles in Round 3, and were clearly raring to spoil Jason Nightingale’s 250th game with a reprisal of their victory in the Charity Shield.

That said, the Dragons were clearly the dominant team on the park, running the visitors ragged over the first stanza, and clocking up 70% of possession by the half hour mark. In a way, though, that just made the Bunnies’ resolve all the more remarkable, as they held on to ensure that the Dragons were unable to get any more than eight points on the board by the time they headed into the sheds at half time.

The one and only Dragons try came on the back of a pair of stunning bombs from Ben Hunt, both of which provided Alex Johnston with a considerable challenge from the outset of the game. The first time around, the young fullback did a brilliant job of cleaning up the footy, while managing to gain some field position for his team after a tackle from Matt Dufty in the air, only for Cody Walker to boot the ball too far at the end of the subsequent set, granting the home team a fresh chance at Souths’ line.

Once again, Hunt opted for a big one with the boot at the end of the set, but this time it didn’t reach Johnston directly, with Dane Gagai fumbling the football before his no. 1 got a hand to it. Shortly after, Nene Macdonald appeared to have crashed over on the fourth tackle, slamming through Gagai, Johnston and Adam Reynolds for what was initially called a try on field, only for the Bunker to deem that the Steeden had been held up by Gagai, a terrific compensation for coughing up Hunt’s high ball.

Still, the Red V were desperate for four points, and a brilliant cut-out pass from Gareth Widdop paired with a short ball from Tim Lafai saw Macdonald almost crash over again the corner two tackles later, only for Hymel Hunt to steal the Steeden from him and take it into touch. It was a disappointing moment for Dragons supporters, and yet Hunt didn’t stop targeting Johnston, while an offload from Jack De Blin a couple of sets later allowed Euan Aitken to showcase some extraordinary footwork to get on the outside of Greg Inglis and put down the first try of the night.

To his credit, Robert Jennings may have run in to clean up, but he got there too late, in what amounted to a real watershed moment for Aitken, and just the display of dominance – a young gun outgunning a veteran – that the Dragons needed to start translating their field position and possession into points. While Widdop may have missed the subsequent kick, the Dragons were still leading by a converted try thanks to a penalty goal earlier in the game, although that still felt like a fairly narrow margin for a team that managed to reach 70% of possession on the subsequent set.

What made things even stranger was that the Bunnies didn’t really improve in their attacking or even in their cohesion, with Inglis conceding a penalty halfway through the restart, the Rabbitohs defensive line coughing up a critical fifth tackle grubber to return possession to the Dragons for a fresh set of six, and Reynolds then giving away yet another penalty for being offside within the ten. Despite the enormous escalation of possession and field position, Widdop chose to take the two – a decision that spoke to the odd precarity of the St. George dominance and advantage.

Things didn’t get much better for the Bunnies either, from a high shot from Junior Tatola on Matt Dufty, to a forward pass from Walker to John Sutton on the first occasion that Souths managed to make their way into the Dragons’ 20. The low point was probably seeing G.I. penalised for backchat, a sign of vulnerability that galvanised the Dragons into some of their best organisation of the game, culminating with Macdonald crossing over in the wing and then running round to plant down the footy beneath the posts, as the Rabbitohs’ big men looked on in utter exhaustion. 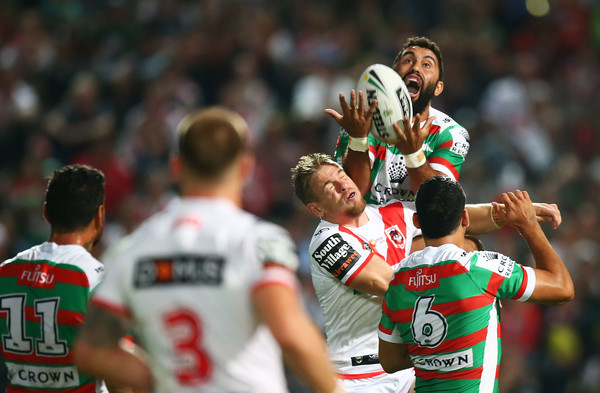 At first, this looked like the Dragons had reset the game. Seeing Macdonald put down the try he had promised earlier on suggested that maybe the Red V would now be able to finally translate their dominance into points. It was all the more dismaying, then, when the try was once again disallowed, this time due to contact on Sims in the buildup to Macdonald’s putdown. With Reynolds slotting through a penalty goal for the Bunnies just before the siren, the game felt more unsettled and unstable than any I’ve seen this year, since you could almost see the St. George players asking themselves why they weren’t miles ahead by this point in the night. 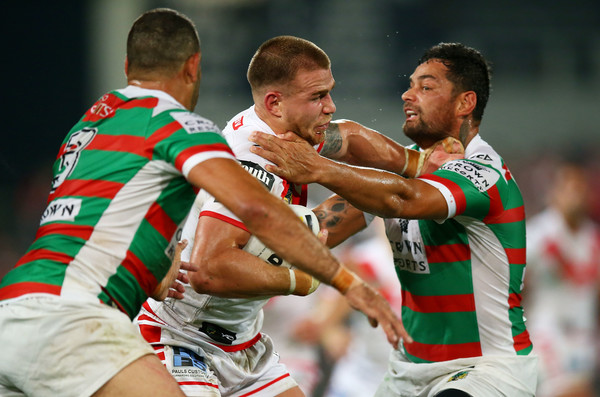 When they came back from the sheds, the Dragons once again seemed to have reset the game, with Hunt intercepting a pass from Sutton to Walker three minutes in and sending the footy across to Dufty, who then ran two thirds the length of the field with only Tatola glimpsing the possibility of bring him down. St. George were now fourteen points ahead, have only conceded an average of twelve points this season, had kept the Bunnies out for the entire first forty – with the exception of Reynolds’ penalty goal – and had set up the second stanza to finally trample over the guests.

As it turned out, however, these would be the last points scored in the game by the Red V, who found it just as hard to build upon their superiority on the field as in the first half. Over the next thirty minutes, they attacked and attacked, but the Bunnies defended and defended, until a towering bomb from Reynolds in the last ten minutes led to a knock-on from Luciano Leilua, setting up Walker to crash through the line on the back of a great pass from Cook, with Gagai adding the extras after Reynolds was subbed ofd for Doueihi following a hit-up from Sims just after his kick.

All of a sudden, Souths had glimpsed an opening, and they made the most of it on the restart, where once again an error from Leilua granted them some additional field position, and an offload from Jason Clark right on the line paved the way for a beautiful string of passes, as the ball moved through Cook, Murray and finally Walker, who sent a soaring harbour bridge pass to Inglis, who put down another try. 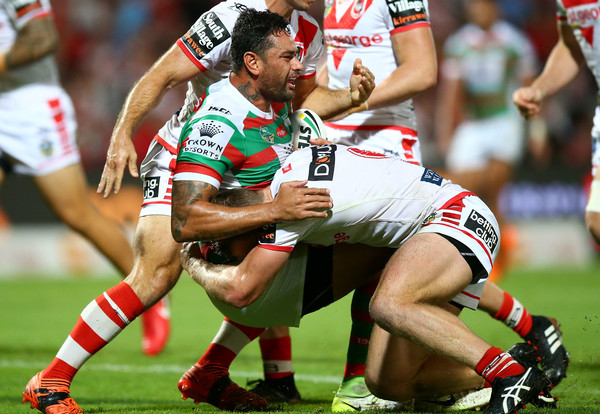 After such a frustrating half, and some particularly frustrating moments from Inglis himself, it was amazing to see the Rabbitohs’ patron saint put down points in this way, and the cardinal and myrtle supporters in the crowd grew even more excited when Doueihi slotted through the critical two points to bring it to a four-point ball game with five minutes to go on the clock. The Bunnies had put in such a sterling defensive effort over the course of the game – it was amazing the Dragons only had two tries to their name – that they deserved something for their efforts, and this final race for the win was true to the scrappy yet determined attitude they’d shown.

Nevertheless, it was the scrappiness that came to the fore in these final minutes, as Walker coughed up the Steeden with two and a half minutes to go, on the back of some escalating South Sydney possession and field position that, for a brief moment, genuinely looked as if it might lead to another four or six points. With another cough-up one minute out from the end, the Rabbitohs’ night was over, and yet their resilience was, in some ways, even more impressive than the Dragons’ professionalism; an incentive to victory when they take on the Roosters next week.