Saturday afternoon’s match may have technically been a home game for the Tigers, but for much of the first half it felt as if both teams were out of their element. The last time they met, Melbourne had come away with an unexpected loss and, combined with her defeat at the hands of the Sharks the previous Friday, they were clearly raring for a win. At the same time, the Tigers were resurgent after their match against the Eels in Round 4, and just as anxious to resume the winning streak that the agonising loss to the Broncos during golden point had seemed to thwart.

On top of all that, this was a milestone game for Melbourne, or at least for Craig Bellamy, celebrating his 400th coaching match at Mt. Smart Stadium. Still, you wouldn’t know it from the first thirty-five minutes, since while both teams may have been scrappy, Melbourne’s credentials made their scrappiness more noticeable. Twice, Cameron Smith tried for a 40/20 – the second time on only the second tackle – and twice he missed it. The third time he got the kick right, but with Tui Lolohea punching the ball back into play Smith’s boot once again failed to secure the goods.

It wasn’t just the Storm, however, but both teams who played awkwardly, with players frequently coughing up the ball, and the incomplete sets mounting as the half time siren drew near. In one particularly weird passage of play, Malakai Watene-Zelezniak caught a towering Melbourne bomb perfectly, only to spill it forward as he burned away from the line, leaving the footy in the perfect position for Billy Slater to spring forward, scoop it into his chest, and head for the chalk for the first Storm try.

In one of the rapid changes in fortune that made this first part of the game so frustrating, however, Billy the Kid spilled the Steeden himself right on the line, only for Esan Marsters to cough it up a couple of tackles later. Shortly after, MWZ fumbled a certain try, and with Josh Ado-Carr saving a certain try for Marsters a couple of sets later, it looked as if Melbourne were – just – managing to take control of a game that both outfits had struggled to invest with any real sense of cohesion.

That just made it all the dramatic, then, when Ado-Carr turned into try assister for his old club, on the back of a long-range kick from Benji Marshall that split the defence and was actually heading over the sideline when the Fox inexplicably smashed it back into the field of play. It was a brainsnap on a par with Blake Ferguson’s move against the Broncos at the end of last year – also in response to a kick from Benji – and the worst single moment of the game so far for Melbourne. 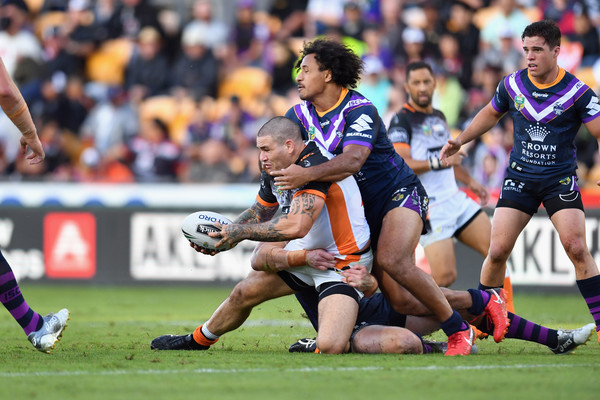 To their credit, the Tigers made the most of it as well, with Marsters now reversing Ado-Carr’s trysaving tackle on him from a couple of sets before by getting to the footy as quickly as possible, and flicking it over to Josh Aloiai before the Fox could quite get him to the ground. With his strength, and at such close range, it was inevitable that the big prop would crash over from there, although the fact that he’d already run for 58 metres – second only to MWZ – made his effort even more heroic. 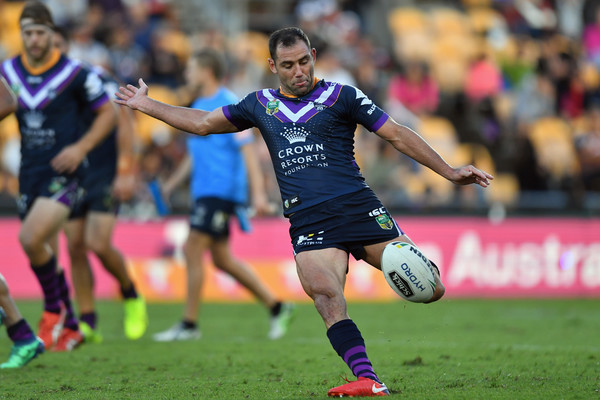 It was a testament to the Tigers’ ability to steadily build a game on defence, as well an indication of how much the Storm have been struggling in 2018 – at least compared to their former glory – since the wingers have typically been one of the safest parts of the team. Certainly this kind of error from Ado-Carr would have been unthinkable even last year, and yet with Lolohea failing to add the extras from right in front of the goal posts the Tigers’ fleeting two-point lead was anything but secure.

Sure enough, the Storm managed to consolidate in the minutes before half time, after Benji put the ball out on the full, leading to a changeover rather than a much-needed scrum feed for the Tigers. At first the hosts seemed to have been let off, thanks to a bad call on Ado-Carr for a knock-on that had actually been Corey Thompson’s mistake, but with Pita Godinet sending across a forward pass a couple of tackles later Melbourne had the scrum feed with just under a minute left to go.

They made the most of it too, with a classic Melbourne study in elegance and economy, as Cameron Munster booted the footy straight out the scrum and Slater stormed forward to get it to ground – a perfect encapsulation of the old Storm. Watching it in isolation, you could have assumed that Cooper Cronk was still on the field, although that just made it all the more surprising when the purple army failed to consolidate on this utterly terrific piece of play when they returned to the field.

For the first twenty minutes of the second stanza, they continually looked set to crash over, and actually came up with their second penalty goal of the night, after Brodie Croft had slotted through a two-pointer early in the first half. Given that the Storm thrive on momentum, this try drought was a bit of a problem, and it eventally culminated with their worst move of the 2018 season – a high ball that Croft simply failed to clean up, presumably because he thought that Vunivalu had called it next to him, leaving the footy to bounce beside them, as Bellamy’s rage reached fever pitch.

From there, the Tigers rapidly took advantage of the shift in momentum, with Brooks burrowing into the defensive line and shifting the footy across to Chris Lawrence, who simply slammed over the chalk as if his life depended upon it. For the whole game Lawrence had been the Tigers’ Mr. Fix-It, offering his team the connective tissue they needed to consolidate at key moments, so it was terrific to see him get the try here, with Lolohea adding the conversion to bring the scoreline to ten apiece.

For the last ten minutes of the game, both sides struggled to avoid sending things into golden point, but it was the Tigers who came up with the difference, with Lolohea catching the ball and getting a foot over the line to set up a seven tackle set, and Benji then booting through a long-distance field goal to bring the scoreline to 10-11. In the most nail-biting minutes all year for black and gold supporters, the Tigers now did what they have done best in 2018 – defend – as Melbourne’s options slowly but steadily ran out, and both teams found themselves facing the last minute.

It was the kind of clutch situation that the Storm normally handle with aplomb, so it was startling to see Slater reverse his magnificent vision at the end of the first half with an error, gifting the Tigers the scrum feed. With bated breath, the hosts then sent the ball down the other end of the field, trying to avoid any errors, or the possibility of an intercept, until the siren blared out and they came away victorious.

It can’t be underestimated how significant this win is for the Tigers, who seemed almost stunned in the immediate aftermath of the match. To beat Melbourne once was good enough, but twice in three weeks can’t be a coincidence, especially given that they’ve only been held out once so far this year – and in golden point. Sometimes whole eras and dynasties are laid on these kinds of foundations, and you can bet the the boys at Leichhardt will be discussing this match for years to come.

On the other side of the Steeden, the Storm have now suffered their first back-to-back loss of 2018, a situation only compounded by Smith’s sinbinning the week before, an event whose impact on the culture and atmosphere of the team can’t be underestimated either. They’re going to be desperate to rebound, then, when they take on the Knights at AAMI Park next week, while the Tigers are going to be just as determined against a resurgent Manly outfit anxious to hold down Fortress Brooky.