Friday night’s match at Scully Park in Tamworth was one of the most atmospheric in the 2018 season so far, as the Knights and Tigers battled it out as a beautiful autumnal afternoon turned into a gorgeous sunset in the distance. This was technically a Tigers home game, but it didn’t feel like a technicality, with the stadium entirely sold out to a largely Tigers-supporting fan base, lending the action on the field the small-scale, communal, cosy ambience of 1300SMILES or Hunter Stadium.

The game started with a missed penalty goal from Kalyn Ponga, and from there both sides struggled to put down the first points of the evening, with both Luke Brooks and Mitchell Pearce booting the ball too far early on, and granting the opposite team a seven tackle set. Despite the presence of the home crowd, the Knights probably looked more dangerous over the opening twenty minutes, continually on the verge of breaking through the line, thanks to an especially aggressive game from Shaun Kenny-Dowall, as well as some good organisation and focus from the whole backline. 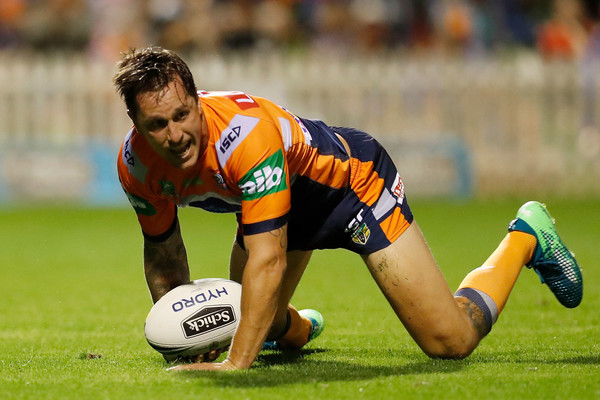 No surprise, then, that Ken Sio landed the first try, thanks to a superb harbour bridge pass from Ponga that had traces of Suliasi Vunivalu’s freakish cut-out pass to Josh Ado-Carr against the Broncos the evening before. With Corey Thompson and Esan Marsters unable to hold him up, Sio put the first four points on the board, and yet with Ponga once again unable to bring home the kick, the score was set at four-nil.

Newcastle were able to consolidate their lead a bit more shortly after, however, thanks to a second effort from Pita Godinet, who had subbed on after a high shot had forced Jacob Liddle off the field for an HIA. A short ball from Jack Cogger allowed Pearce to slide through the Tigers defence with alarmingly little resistance, coming closest to Sauaso Sue, who barely got a hand to him. For the top rated defensive team in the competition, it was a worrying sight, as was the prospect of being kept to nil by halftime, a feat Newcastle haven’t achieved against the team in 15 years.

In the buildup to half time, the Tigers got a couple of opportunities on the Newcastle line, but the Knights were able to keep them out, partly because of Benji Marshall’s absence from the field at this particular point. Still, the ex-Bronco made his presence felt as soon as he trotted back onto the park at the beginning of the second half, setting up Brooks for a short ball to Michael Chee Kam who took advantage of some indecision from Jack Cogger to lunge forward and ground the footy beside the posts.

If that wasn’t enough, a bomb from Benji now allowed the Tigers to go back to back, as SKD came in for the catch too late and found the Steeden bouncing through his arms and back towards the Tigers – a fumble that was all the more dramatic for the ex-Rooster’s terrific form over the night so far. It was too late for him to regather, though, as Kevin Naiqama stormed up from behind, grabbed the footy, and scrambled through the regathering Knights defence to slam down four more points.

The Tigers were now on a roll, and a massive hit-up from Luke Yates that saw Elijah Taylor taken off the field just roused them even more, inducing Benji to put in yet another beautiful last-tackle option. This time it was a deft chip right on the line that eluded Yates – just for good measure – and sat up superbly for Corey Thompson to put down a further four points, with Esan Marsters adding the extras shortly after. 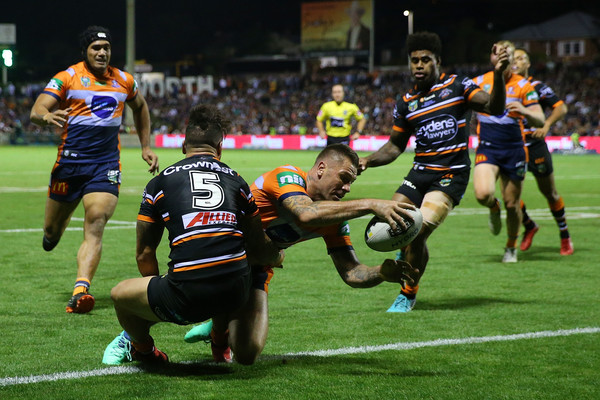 While the Tigers might have had some even better passages of play this season, none have been quite so stark in clarifying Benji’s enormous vision, leadership and organisation of the team. To come back, the Knights had to offer something special, and find a way to recapitulate their momentum from the opening minutes of the game. They did so, shortly after, in the most literal way possible, following a massive hit from Robbie Rochow on Jamie Buhrer, and then a messy offload from Marsters to Thompson that forced the Tigers fullback to cough up the footy back to the Knights.

From there, the Knights doubled down, as Lachlan Fitzgibbon more or less replicated Ponga’s long ball from the opening half – with perhaps a bit more spiral on it – to allow Sio to put down a double in the corner before David Nofoaluma could even get a hand to him. A couple of sets later, a trysaving tackle from Benji prevented Fitzgibbon putting down his own four points and adding to his excellent tryscoring record this season, a defensive move every bit as good as Benji’s previous try assists.

Still, some brilliant timing from Pearce at the end of the set allowed Sio to crash over for a hat trick, by which point Newcastle had more than recovered the momentum of the first part of the game, with the powerful winger having now three out of four Newcastle four-pointers. In many ways, it felt as if the visitors were already ahead, since the only real chink in their armour had been Ponga’s work with the boot, and once again the young fullback missed the posts, leaving the scoreline a tense 18-20.

With seven minutes left on the clock, it was pretty clear that the next team to score would be the team to win, and both teams dug in accordingly, since the two-point differential meant that a field goal was now out of the question for the Tigers. At first, things seemed to have gone against the Knights, who came up with an error at the very start of a seven tackle set, and then saw Pearce led off the field for an HIA.

In an incredible closing sequence, however, SKD milked a penalty from Godinet during the play-the-ball right after Brooks had opted to run instead of kick on the last tackle of the previous Tigers set. Down the other end of the field, Buhrer put in a Pearce-like kick from the halves, which SKD caught on the chest and slammed to ground with MWZ wrapped around his waist. It was an exuberant moment for Newcastle fans, and will probably turn out to be a critical moment in their 2018 season, not least as they head into their clash with Manly at Lottoland in Round 8.

Meanwhile, it was a bit of a deflating end for the Tigers, marking their first really emphatic loss of the year, and bringing their stunning defensive streak to a bit of an untimely end. While SKD’s final putdown might have been spectacular, the Knights had already effectively won the game in terms of skill by this point – it was only Ponga’s inconsistency with the boot that had kept them behind – and Ivan Cleary will surely be keen to rectify this when they take on the Eels for the Battle of the West next week.