It was always going to be personal when the Sharks and Panthers met for the first time following the Maloney-Moylan trade, with both teams anxious to prove that they had got the better deal. Given how stunning Maloney has been during Nathan Cleary’s absence, there was arguably a bigger onus on Cronulla to perform on Sunday afternoon, although the fact that they met at Shark Park gave them a bit of a competitive advantage too, even if the Panthers were also galvanised by the return of Dallin Watene Zelezniak on the wing, after a couple of weeks out on the sidelines.

Just to make things interesting, Moylan laid the foundation for the first points, sending a short ball over to Andrew Fifita, who then managed a superb off-the-ground offload to Josh Dugan. Even on its own terms this offload would have been impressive, but given that it had only been last week that Fifita had appeared to be out for the season, and given some of the big absences announced over the last few weeks – most notably Mitchell Pearce – there was something serendipitous about seeing the big Sharks prop get back to his trademark form so rapidly and efficiently.

That was just the start of the play, however, with Josh Dugan putting in a superb kick through the defence for Valentine Holmes, in one of the best arguments for their position at fullback and wing respectively that we’ve yet seen. Just to add insult to injury, Holmes got on the outside of DWZ, although with Chad Townsend not managing to boot through the conversion the Sharks were only four points in front. 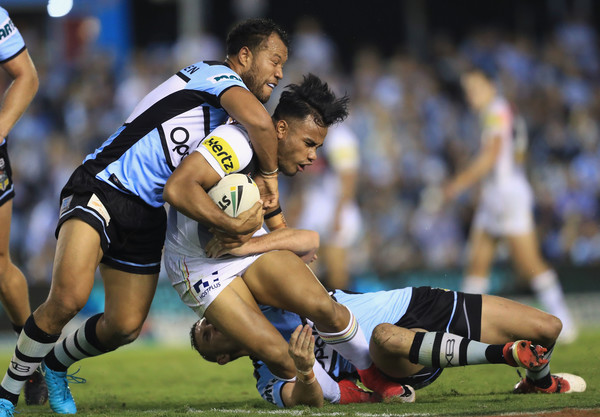 A couple of minutes later, Moylan made an even more emphatic gesture of leadership, kicking the ball through the defensive line and then running forward to contest Christian Crichton for it. In truth, Mansour’s replacement had time to get back into the field of play, but hesitated enough for the ex-Panther to get right up in his face and force the Steeden out of his hands, leaving it open for Jayden Brailey to slam forward and get it to ground in what at first looked like the second Cronulla try.

This was one of those moments, however, when the Bunker footage really comes in useful, since the replay confirmed that Moylan had made a deliberate play at the footy, rather than Crichton simply losing it in the tackle. Similarly, while the ball had moved backwards, the footage showed that Moylan had actually knocked it forward, with only the presence of the Penrith winger’s knee richocheting it backwards again. 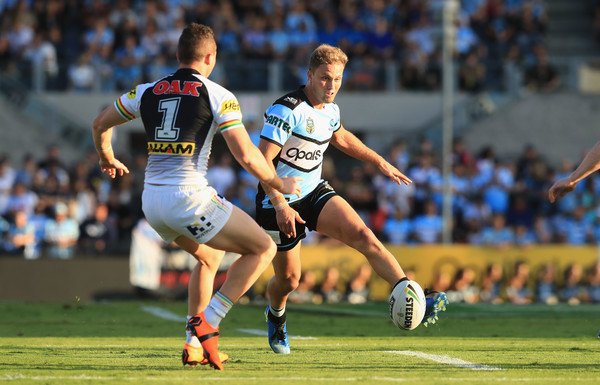 It was a big letoff for the Panthers, and for Crichton in particular, who’s had a few errors of judgement so far this year – errors that continued on the next set, when he inexplicably chose to scoop up a massive Cronulla kick that would almost certainly have travelled into touch, and then made an official error again a couple of minutes later. That marked the beginning of a more resurgent period for the mountain men, thanks in part to a pair of injuries from Luke Lewis, whose knee gave way, and Joseph Paulo, who had subbed on for Matt Prior ten seconds after Crichton’s mistake, but had to leave shortly after for an HIA thanks to a huge hit-up from RCG.

Meanwhile, the Panthers continued to consolidate, gaining a goal line dropout thanks to a perfectly weighted kick from Maloney that allowed DWZ and Dean Whare to clean up Valentine Holmes in the top left corner. With a last-tackle penalty shortly after, Whare and DWZ once again collaborated, as the centre popped the football over to let his winger through, a triumphant moment for the Panthers no. 2 after his time away from the field, especially after having let through Holmes earlier.

Just as the Sharks’ opening try had been followed by a phantom try, so the Panthers initially looked to have scored again shortly after, as Moylan caught the high ball in both hands in the in-goal area, only for Tyrone Peachey to get a hand to it just after and knock it away from him, setting up RCG to slam down the Steeden much as Brailey had before him. Once again, however, slow motion showed that there had been a knock-on, leaving both teams with a try apiece on the board, although Maloney’s consummate kicking prowess ensured that Penrith were now two ahead. 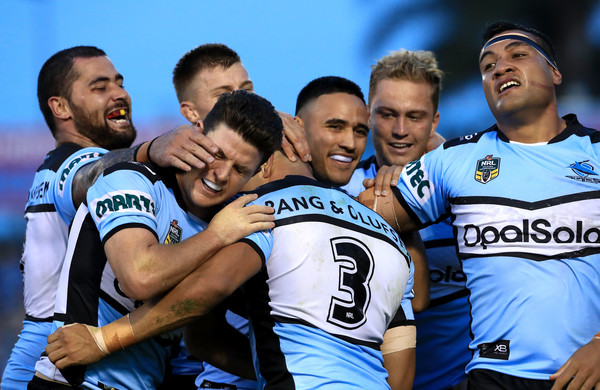 Still, the Sharks were the next to cross over, as a pass from Moylan and a decoy run from Fifita set up Scott Sorensen with some space in the middle of the ruck. He made the most of it, too, busting through a pair of barely-formed tackles from Isaah Yeo and Corey Harawira-Naera before pivoting off his left foot to elude Edwards and smash the ball to ground beneath the posts. It was the most plosive and powerful four-pointer of the afternoon so far, and with Townsend now adding the extras for the first time it formed a powerful riposte to DWZ’s previous effort out on the wing.

As half time loomed, both teams clearly felt the pressure to make their mark on the match, since Cronulla were only four points ahead, but the result was a surprising scrappiness and messiness from both sides, with the ball changing hands about seven or eight times in a row over the last couple of minutes, as we were treated to one intercept and cough-up after another. It was a passage of play that also captured just how evenly matched the game had been up until this point, with the 10-6 scorelines forming a pretty accurate summary of each outfit’s performance.

At the same time, though, this was the kind of clutch situation that normally results in a try for one team or another – if only because the other team grows just a little too scrappy, or a little too tired – so it was strangely anticlimactic when both teams headed into the sheds without having managed to make the most of this period of contested possession, even if it made the second stanza more suspenseful as well.

As with the opening half, the Sharks were the first to put down points here, thanks to a superb passage of play that started off, oddly enough, with a pinpoint perfect kick from Maloney to Crichton’s corner of the field. In yet another of the errors that had marked his game, the young fullback allowed Dugan to get out of his tackle, and from there the ex-Dragon stormed up the sideline of the field, getting well beyond halfway before shooting the football over to Edrick Lee to continue his momentum.

While a couple of wide passes may have given the Panthers time to reconstitute their sliding defence, Cronulla were clearly on a roll, and they put down points a couple of tackles later, thanks to a terrific set play that seemed to reassert their command of the ground and crowd. Scooping up the Steeden right on the line, Brailey started to accelerate over to the right wing, only to pop it behind him to Jesse Ramien, who crashed over the chalk before the Panthers knew what hit them. 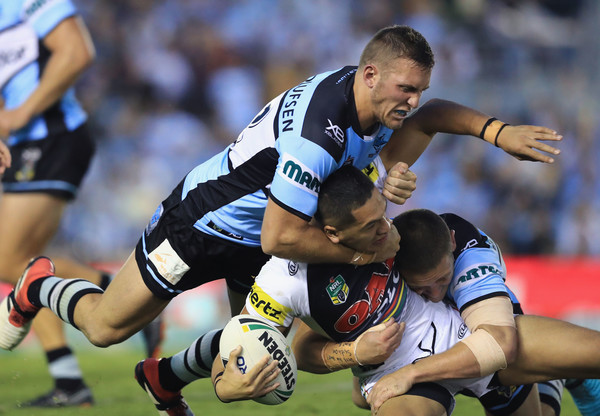 Penrith got a second wind, however, as soon as Sione Katoa subbed on for Wallace, with the young hooker threading the ball through the defence with impressive dexterity, setting it up for Edwards to crash through and get it to ground as Sorensen tumbled over the top of him. Shortly after, the Panthers seemed to have another shot at four points, with Maloney’s grubber ricocheting off James Segeyaro’s chest for him to recollect it and orchestrate another attack on the line after the refs had deemed the ex-Leeds hooker to have made a play at the ball as it struck his jersey.

Segeyaro got his own back a few minutes later, though, for what was probably the most impressive Cronulla try in the entire game. Slicing the Steeden through the Penrith defence, Chicko saw Maloney take Dugan out of contention before slamming forward to ground the footy himself, only for the replay to show that Ramien had got a hand to it just before him. Initially, the Bunker was considering whether or not the obstruction of Dugan was enough to constitute a penalty goal, but with Segeyaro and Ramien’s double putdown the question was moot, and the Sharks clocked up six more once Townsend sent the footy through the posts for the third time that night. 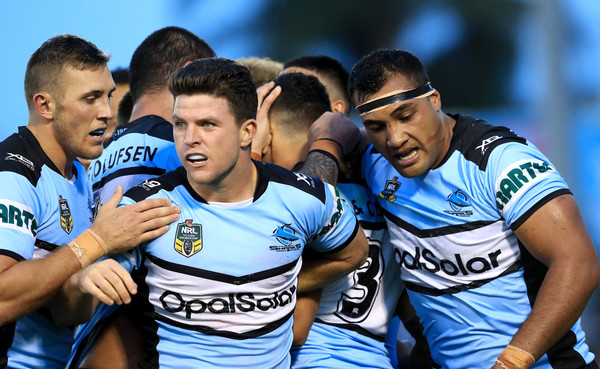 Seeing what effectively amounted to three Cronulla players in position to put down the try must have been an intimidating prospect for the Panthers, who were now only half the hosts at 24-12, and suffered two successive penalties from Trent Merrin as the game wound down, the second of which gifted the Sharks the penalty goal that won them the game. They weren’t to know that, however, as Moylan added the two points, since nobody could have expected that over the final four minutes the Panthers would almost manage of the greatest second-half comebacks of the year.

It started with Holmes fumbling the kickoff before booting it over the sideline in frustration – right into one of the cameramen, as it happened – and gifting the Panthers just enough time to score a couple of tries. They made the most of it, too, with Yeo smashing over the line through Moylan and Dugan a mere couple of tackles later. So easy did it happen that you had to wonder why the Panthers hadn’t gone down this route earlier, but with Maloney adding the extras as reliably as ever the visitors didn’t have time to reflect or even think – just time to put down the next try.

As it happened, it came just a little too late – at the seventh-ninth minute – for Penrith to be able to surmount the remaining two-point deficit, but even then Viliame Kikau’s putdown was a tribute to the Panthers’ efforts to reassert their control and command of the game in these final moments. While Merrin might be wondering how golden point would have looked without his second penalty, it’s also possible that the visitors wouldn’t have been fuelled into these last two tries in the first place if it weren’t for the frustration of seeing their big lock playing below par.

Meanwhile, the Sharks have another win behind them as they head into next week’s game against the Titans, while the Panthers are going to be sure to take all their frustrations out on a – somewhat – resurgent Bulldogs outfit, at least if we ignore this week’s game against the Roosters. Still, it feels as if Cronulla and Penrith still have unfinished business and that both sides are going to be searching for a strategy for coming away with a more decisive win when they next meet on the footy field.