Both the Eels and the Sea Eagles were in a fairly desperate state when they met at ANZ Stadium on Sunday afternoon. Most obviously, Parra were still without a win this season, and were looking to make the most of having Jarryd Hayne back on the field after a couple of weeks nursing his hip injury. Yet the Sea Eagles were almost as frustrated after their shock loss to the Wests Tigers the previous weekend, while the publicity following Daly Cherry-Evans and Jackson Hastings’ altercation meant that the club really needed a solid victory to reconsolidate their focus and cohesion.

In other words, it was going to be a really tough loss for whatever team lost. From the outset, DCE seemed unsettled and unfocused, missing a deft grubber from Corey Norman that Tom Turbo only just managed to tap into touch at the last moment. On the following set, Manly appeared to have cleaned Parra up on the final tackle, only to concede a penalty and provide the visitors with the option of whether to have another shot at the goal line or take the safe option and kick for the first two points. 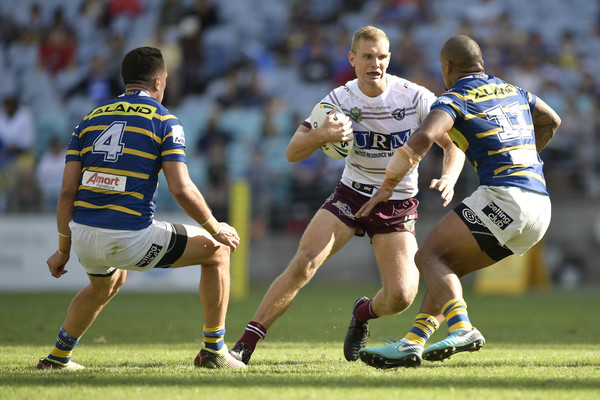 Not surprisingly, perhaps, Parra decided to take the two, as if anxious to get on the scoreboard as quickly as possible after being held tryless by the Raiders last week. It felt symbolic, then, when Mitchell Moses missed what appeared to be a fairly straightforward kick, hooking the football around to the left for a trajectory that seemed to summarise everything about Parramatta’s season up until this moment. 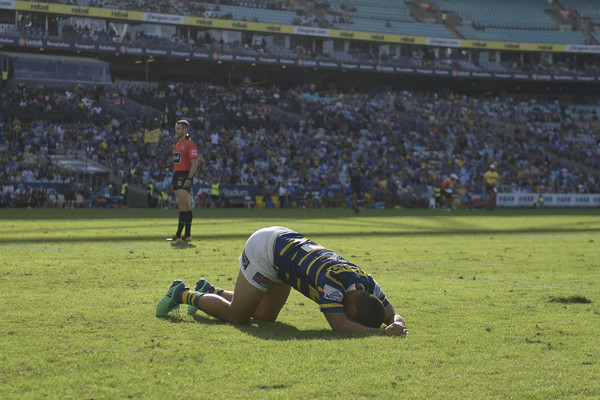 While Moses got a second shot at penalty goal shortly after, DCE appeared to have reset the game and shaken off his distraction at the twenty-fourth minute, when he managed a beautiful 40/20 that saw Brian Kelly slicing through the blue and gold defence a couple of tackles later. In the first major turning-point of the game, however, the replay showed that Joel Thompson had stopped in the defensive line to prevent Tony Williams making the tackle, a fairly fortunate outcome for the Eels given that Moses and Jennings had both tried and failed to prevent Kelly passing by.

You could tell that DCE was seething at their sudden turnaround in fortune, even as Parra responded with their most energetic football in weeks – perhaps of the entire season – culminating with Michael Jennings getting the ball across to brother George on the fourth tackle. For a moment, George considered crossing over in the right wing, before bringing the Steeden back to the middle of the field and sending it out to the other side, where the Eels’ left edge continued his momentum, and Hayne put in a mammoth effort to almost bust through two tackles to slam it across the line. 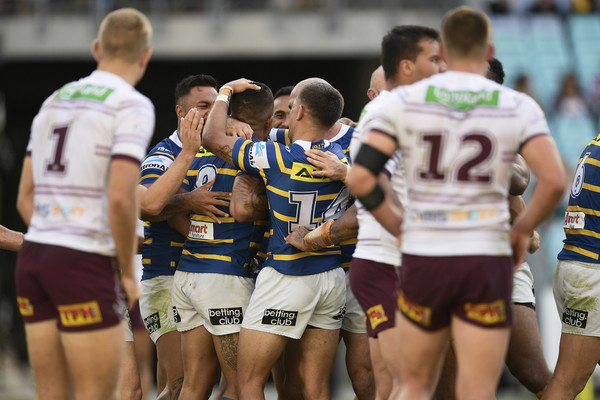 Only the best Sea Eagles defence of the game so far was able to keep him up, and, for a moment, a scrappy pass back to Norman seemed to signal the end of this set for the Eels. Once Norman got the ball over to Moses, however, the young halfback put in a terrific bit of play, realising from the previous set that the left edge was still the most promising prospect and bringing the footy back to Hayne, who caught and passed it over to Ma’u to curve around from the corner to score beneath the posts.

The downside for the Eels was that Hayne was now taken off the field with a resurgence of the hip injury that’s plagued him over the last couple of weeks. Nevertheless, Parra had built momentum, and they were able to consolidate it after an obstruction from Shaun Lane midway into the next Manly set brought Jake Trbojevic back just as he was just starting to break into open space, in one of the most frustrating and agonising moments of the afternoon for the Sea Eagles so far. 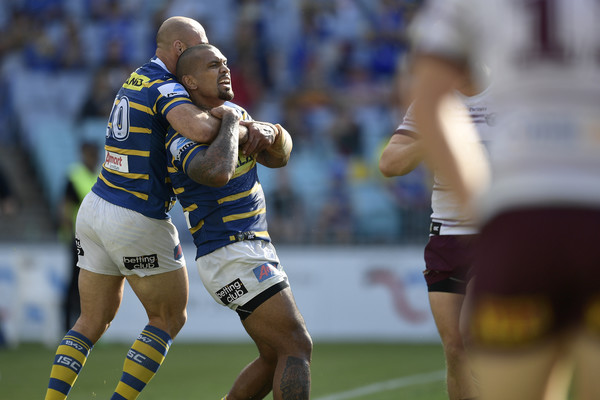 Three tackles later, the Eels had made it back to the Sea Eagles’ line, where David Gower almost crashed over, making up for having coughed up the footy early into the restart on the back of the blue and gold army’s first try. Once again, though, Moses consolidated his focus and leadership, sending a superb harbour bridge pass across to George Jennings to cross over for another four points in the right corner.

Even in a footy round characterised by massive spiraling passes – and kicked off with one of the best passes of the year from Suliasi Vunivalu – this was still a pretty special effort, as the ball cleared about five or six jerseys before finding Jennings right on the chest. By this stage it was easily the best first half of football from Parramatta this year, and as the Manly players’ body language got more frenetic and frustrated, Moses took a couple of deep breaths before once again slotting the footy straight through the uprights, as if resetting the Eels’ season before our very eyes. 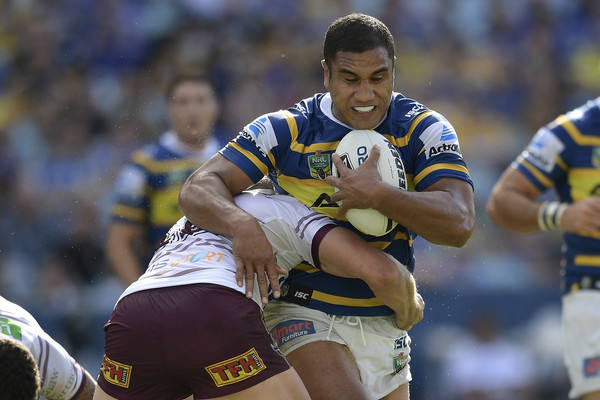 Parra weren’t done, however, with Kaysa Prichard bringing home another try less than a minute out from the half time siren, and in the most painful way for the Sea Eagles. Finding Jake Trbojevic offside on the fourth tackle, and right on the line, Pritchard simply ricocheted past the Manly lock to slam over the chalk, in what felt more like an optical illusion than a genuinely contested four points. Full credit has to go to Tony Williams, too, for a punishing run to set it all up, as the Eels headed into the sheds with an amazing 20-0 advantage after having been kept tryless last week.

With that kind of scoreline you would have expected some kind of epic comeback from Manly, but the points kept flowing for Parra in the second stanza. Eight minutes in, a cut-out pass from Michael Jennings allowed Norman to slam through a Sea Eagles defence that seemed utterly exhausted by this point in the game. With Moses adding the extras, the score was now 26-0, and the Eels had enjoyed over 66% of possession, an incredible statistic given their form over the last few weeks.

A couple of minutes later, Moses kicked on the third tackle for Michael Jennings to clock up a try alongside his brother – because why not? – in what was quickly looking as if it might be the landslide win of the year if Manly didn’t manage to put down points quickly. With Moses missing the conversion, they might have sensed a brief weakness, or gained a bit of confidence, but for whatever reason Brad Parker was the next to cross over, off exactly the kind of seamless ball handling and brilliantly timed passing that you would have expected from the outset from this Manly outfit.

The Eels responded so quickly, however, that it was as if the Sea Eagles had never scored. This time, there was no special play – just the seamless and clinical professionalism that Parra had somehow managed to inject back into their 2018 game over the last sixty minutes. All it took was a pair of passes – from Moses and Norman – to pinpoint the gaps in the Sea Eagles defence, and from there Edwards crashed over for the sixth Parramatta try of the afternoon, for what appeared to be a totally different team from the blue and gold jerseys we’ve seen over the last weeks. 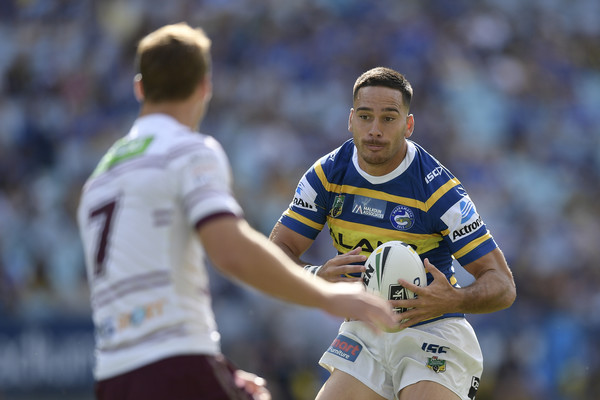 To his credit, Akuila Uate managed to respond with four points a couple of sets later – an important rallying point for Manly given his difficulties against the Tigers last week. Still, with DCE botching the conversion it was clearer than ever that the Sea Eagles had no chance of a comeback, and that the best they could hope for was to attempt to stop the Eels from adding even more to their enormous winning margin.

Unfortunately for the away crowd, they couldn’t even do that, with Moses once again showcasing some incredible vision after Parra had sniffed around the ruck and sent the ball through one player after another looking for a way through. Collecting it just to the right side of the field, Moses made as if to kick and then scooted his way through the line, before popping it across to Clint Gutherson who broke through two or three lines of Sea Eagles defence before bringing it to ground beneath the posts.

The subsequent two points couldn’t have been easier for Moses, and they had an air of something triumphal about them as the scoreline shot to 44-10, in one of the most devastating performances for the Sea Eagles in years, not least because Gutherson himself was a Manly junior. By this stage, the Eels were probably starting to think about a half century, and while it wasn’t to be, this still goes down as an incredible victory, tantamount to resetting their season for the coming year of footy. 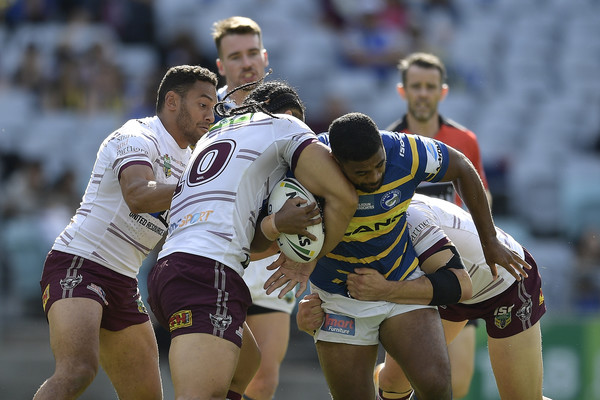 Meanwhile, Manly almost looked to have added another try to their scoreline, only for an unintentional knock-on from Uate to leave them at ten points. After the ex-Knight’s spotty performance the week before, this almost seemed to cancel out his earlier four points. Still, it was the team as a whole that hadn’t really shown up, and you can be sure they’ll be asking themselves some tough questions before they take on a Newcastle outfit roused by their win over the Wests Tigers at home next week.