Both the Dragons and the Roosters came into Wednesday’s match pumped for a win, and not just because this has become a traditional fixture and rivalry for them on ANZAC afternoon. Last week, the Red V suffered their first loss of the season against the Warriors, while the Tricolors had only barely come away with a 6-0 win over the Bulldogs, despite some impressive and sustained defensive work. Given their shock loss to the Bunnies the week before, though, they were just as determined as the Dragons to use this fixture to get their 2018 season back on track.

The loss to the Warriors must have hurt more, however, since the Dragons scored on the very first set, thanks to Ben Hunt choosing to run the football on the last tackle – a decision that was so surprising to the Roosters defence that the ex-Bronco was able to slot the Steeden over to Cameron McInnes without too much pressure, allowing the St. George-Illawarra hooker to pop it across to Gareth Widdop in turn.

From there, Widdop put in the fifth-tackle kick, booting the ball over to the left of the field for what initially looked like a bit of a misfire, only for a touch from Blake Ferguson to set it up perfectly for Nene Macdonald, who scooped the footy into his chest and crashed over the line for the first points of the afternoon. With Widdop adding the extras, the Dragons were a converted try ahead with barely a minute on the clock, setting in for what initially looked like it might be a rapid cascade of points.

Meanwhile, this was a pretty abrupt start for a Roosters outfit who had proven themselves capable of keeping the Bulldogs out for a full eighty minutes over the last week. Ten minutes later, Joseph Manu and Latrell Mitchell put their frustration to good use with an epic effort to drag Euan Aitken into touch, and with Cameron McInnes tripping Luke Keary at the end of the subsequent set the Chooks got six again – the start of an massive period of possession and field position for the visitors. 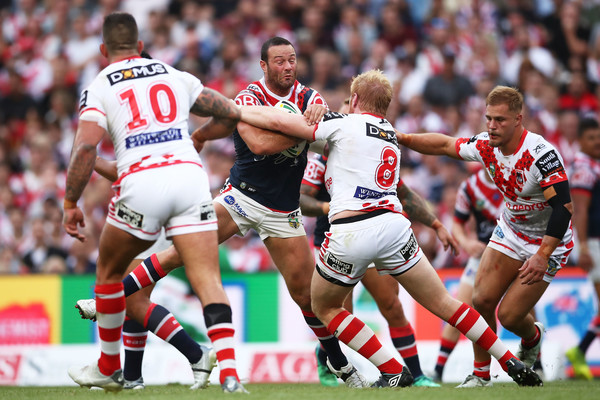 Over the next five minutes or so, the Roosters got chance after chance at the Dragons line, with St. George temporarily regaining the scrum feed only to turn the footy over immediately after. It was Mitchell who came up with it, receiving a penalty in front of the posts to boot, but this was just one of several errors that the Red V bled during this critical period of possession, with Tyson Frizell actually finding his face covered in blood during a brutal clash with Zane Tetevano that resulted in yet another penalty for the visitors, and another visceral surge at the St. George line.

Possibly the most frustrating moments for the Dragons came at the beginning of this period, when Macdonald scooped up a botched pass from Keary, only for the slightest of touches from Tim Lafai to return possession to the Chooks once again. Still, it was the Roosters who came away frustrated, as Cooper Cronk conferred with the other players on the back of yet another penalty and appeared to have decided that it was better to take the two than to risk coming away empty-handed after such a staggering period of possession, and such a string of errors from the opposition. 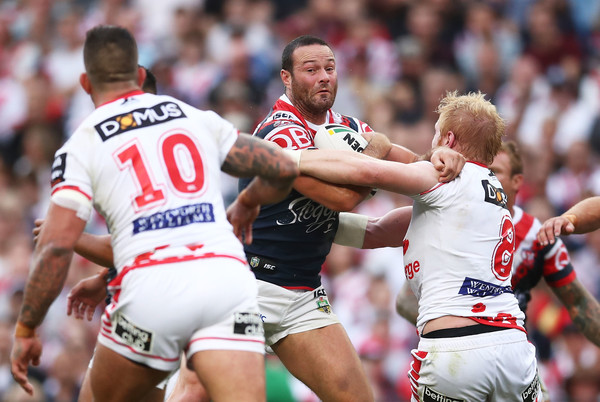 While the Roosters might have made it onto the board, this could only be a victory for the Dragons, who’d managed to keep their rivals tryless over the course of a stunning defensive effort. Jack de Belin seemed to capture the mood of the whole team with a couple of big claps as Cronk lined up the tee, but the Dragons didn’t manage to translate this letoff into more points until the last minute of the first half.

Once again, the Red V benefited from Ben Hunt running the ball at an unconventional moment, although the foundation was laid earlier in the set, with an intercept from Jason Nightingale down the other end of field and a barnstorming run that got him across the halfway line and up to the forty. Over the next couple of tackles, the Dragons consolidated everything that had been impressive about their first half, moving from side to side before Hunt straightened things up to get the footy under his arm and showcase one of the most dangerous right foot steps of the 2018 season so far to beat Boyd Cordner and Luke Keary over the line for four more. 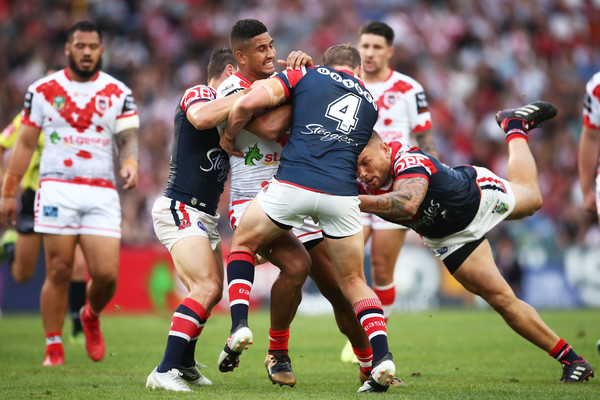 While they might not have achieved the cascade of points that their opening try promised, then, the Dragons had bookended the first stanza with a terrific pair of points, both of which had come off Ben Hunt running the football. Coming back from the break, however, the Chooks initially appeared to have received a chance to make their own early mark, thanks to some miscommunication between Macdonald and Dufty under the high ball that forced Lafai to run in and clear it up, but not before the defence made the most of his hesitation to drive him back and force a mistake.

It was a vision of disorganisation and vulnerability that we hadn’t really seen from the Red V this game, and yet Tariq Sims made up for it on the final tackle of the subsequent set, cleaning up Cronk with a brutal tackle that ensured that the Chooks were unable to make the most of the St. George clumsiness down the other side of the field. If that was a momentum-builder, the seeing Sims crash over shortly after on the back of a short ball from Widdop was the high point of the game so far for the Dragons, especially since it came on the back of a short pass from Kurt Mann, who more than made up for the error that he’d made towards the end of the first half.

Once again, Cronk was the casualty of the try, along with Mitch Aubusson, in what was quickly becoming a seriously distressing situation for the Roosters. It was exactly the kind of scenario in which James Tedesco should be able to shine, since his experience with the Wests Tigers and Blues means that no other fullback in the competition is quite so adept at making magic for a struggling team. Sure enough, Teddy chose this moment to shine, setting up Keary to boot the ball through the line, where it sat up for Mitchell to burn forward and ground it for the first Roosters try.

While the footy may have been grounded at the back of the in-goal area, Mitchell showed all the dexterity of a winger in the precision with which he got the Steeden to earth before his hand slid over the dead ball line, in what just looked like it might be the start of a resurgence for the Roosters, especially once the young centre added the extras. Sure enough, Ryan Matterson appeared to have crashed over shortly after, only for the footage to reveal a knock-on from Mitchell himself that led to a call of no-try, in what may well have been the critical turning-point of the game.

Shortly after, the Dragons enjoyed a condensed version of the Roosters’ sustained period and field possession in the first half – condensed, since they manage to put down four more points, at least according to the Bunker, at the end of it all. It started with an error from Zane Tetevano, combined with two terrific kicks from Widdop – one of which ricocheted of Tetevano’s chest, and the other of which Fergo had to smash into touch on the left edge, both of them gifting St. George six again.

Whereas the Roosters had struggled and strategised in the first half, however, the Dragons just consolidated here, culminating with a harbour bridge ball from Dufty that set up Macdonald for a double. With an on-field ruling of try, the onus was on the Bunker to disprove the grounding in what turned out to be a closer situation than anyone could have expected in real time, since you could have made a very good case that the big winger had lost the ball before it made contact with the turf.

Still, the difference between loss and putdown was so infinitesimal that the Bunker felt compelled to rule it a try – a decision that cemented the Dragons’ momentum, not least because Cronk had initially seemed to put in trysaving tackle to prevent Macdonald getting the ball to earth (and to many thinkers still had) For what it’s worth, I could see the Bunker’s thinking here, and didn’t find the putdown all that different, really, from some of the fingertip groundings we’ve seen over the last couple of years, even if it stretched that situation about as far as it could possibly go.

The fact that it initially the last try scored probably made it more controversial, and with the Dragons going into the sheds with triple the Roosters score this counts as a comeback after their first loss of the season to the Warriors last week. Meanwhile, the Chooks are going to have some soul-searching to do before they front up against the Sea Eagles next week, in what will surely be one of the most emotional clashes of Round 9, at least if Manly don’t manage to make up for being decimated by Parra.