The Bunnies were raring for a win at ANZ Stadium on Thursday night after a spectacular pair of victories over the Raiders and the Roosters during the last fortnight. With Greg Inglis clocking up his 250th game, it was even more important that they find a way to defeat a Broncos outfit that were also high from having shut down the Warriors for the first time of the season two weeks before, but who had been thoroughly schooled and even humiliated by the Melbourne last Friday night. 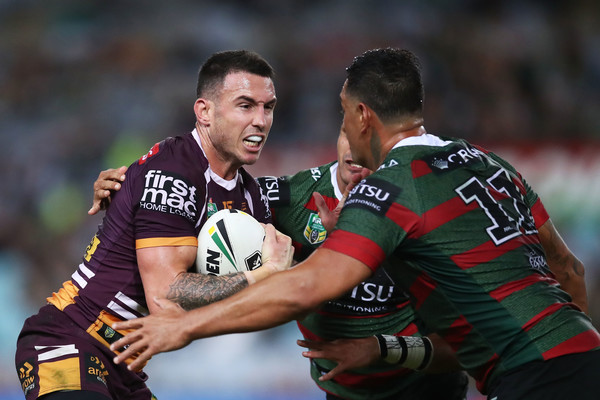 The game started a bit precariously for both teams, with James Roberts momentarily debilitated by a flare-up of the cartilage issue that has plagued him over the last few weeks of football, and an early error from Dane Gagai rupturing the Rabbitohs’ focus, especially once Adam Reynolds seemed to be down for the count as well. For a moment there, Adam Doueihi was poised to replace him, but that just made it all the more rousing for the Bunnies’ home crowd when their star halfback returned to his short kicking game a couple of tackles later, booting through a tryscoring ball. 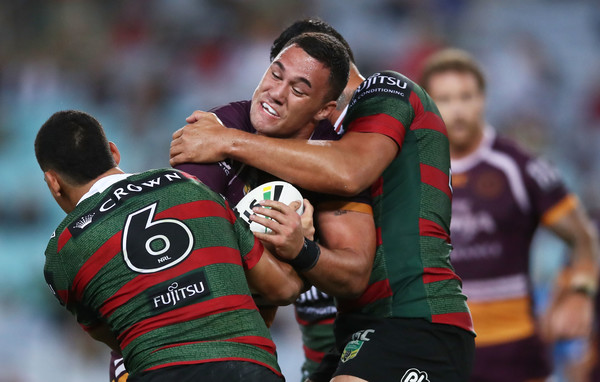 It wasn’t just Reynolds’ vision, however, but Jack Bird’s ineptitude that ensured these first four points for the Bunnies, with the ex-Shark arriving at the footy just as it reached the try line, only to fumble it forward, leaving it open for Cody Walker to slam through and get it ground at the back of the in-goal area. It was the very nadir for Bird after several weeks of questions about his performance at the Broncos, and with Reynolds adding the extras it was hard to think how the game could have started better for Souths, even if Gagai was still a little less organised than normal. 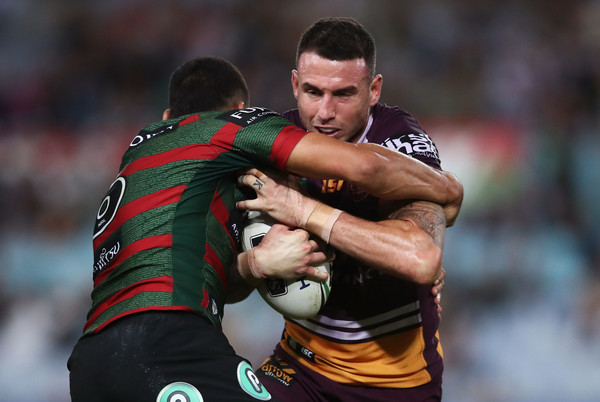 The Broncos had to consolidate quickly, then, if they were to regain control of the night, and Corey Oates announced himself as the man for the job shortly after, when he cleaned up a perfect spiraling bomb from Reynolds right in the corner and then advanced forty or fifty metres up the field. A forward pass from Matt Lodge might have undone it all a tackle later, but that just steeled the big winger for his best effort in weeks up the left side of the field on the next set, during which he got a hand to the ball several times before booting it through the defence for Darius Boyd to slam through and ground it as if he’d never had a hamstring issue in his entire life. 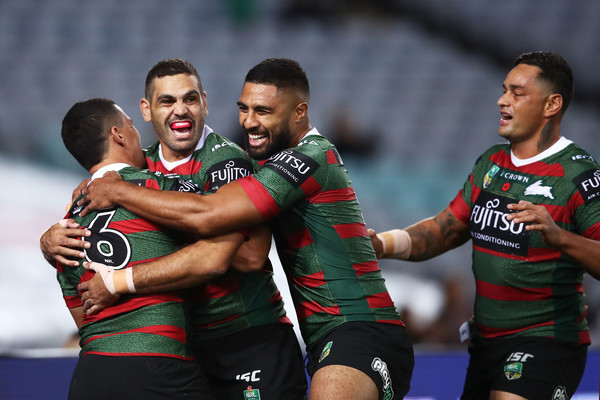 South Sydney didn’t take long to respond, however, with some deft passing from Cook, Reynolds, Walker and then Inglis sending the footy across to the left corner a couple of minutes later, where Alex Johnston put down their second try of the evening with characteristic elegance and focus. Ever since Johnston’s five tries against the Panthers in July last year the spectacle of him putting down points always seems to galvanise the Bunnies to a sense of what they can achieve, and it didn’t hurt here that it came off a particularly inspired short ball from G.Y., who spun around and out of a tackle from Roberts before sending the footy onto his wingman. 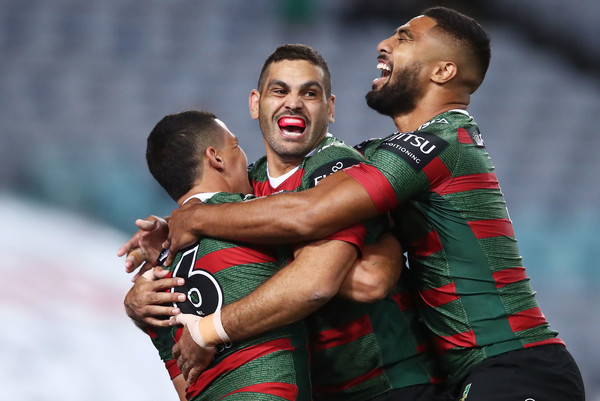 Towards the end of the first half, Johnston went from tryscorer to trysaver, thanks to a mammoth effort to prevent what initially seemed like a certain four-pointer from Kodi Nikorima. The Brisbane half got to ground about half a metre out from the line and then proceeded to slide over, with only his own hand between the Steeden and the turf in order to maintain possession. In that split second, however, Johnston managed to drag and pull him so that his hand remained there, with Reynolds coming in to clean things up just before Nikorima had a second shot at grounding it. 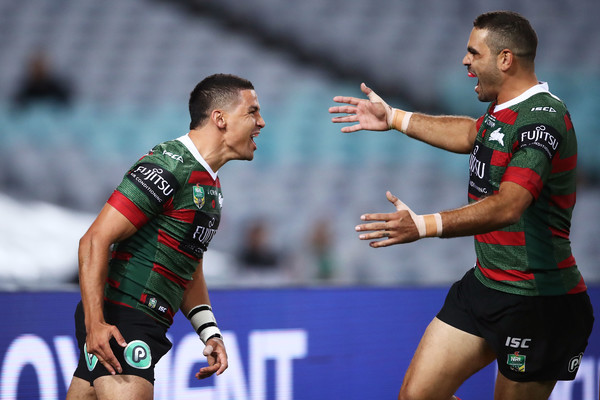 It was a spectacular clean-up – Johnston’s best defensive moment of the year so far – and yet Nikorima was the next to score, about ten minutes into the second half, on the back of a sustained period of field possession for the Broncos as the Bunnies bled penalties at their end of the field. Dummying  deflty to the right, Nikorima brought Walker into the line, and with Sutton unable to get him to ground as he dashed through the defensive line Kodi put down the first try of his first grade career in New South Wales, bringing the score to twelve-all with thirty minutes left on the board. 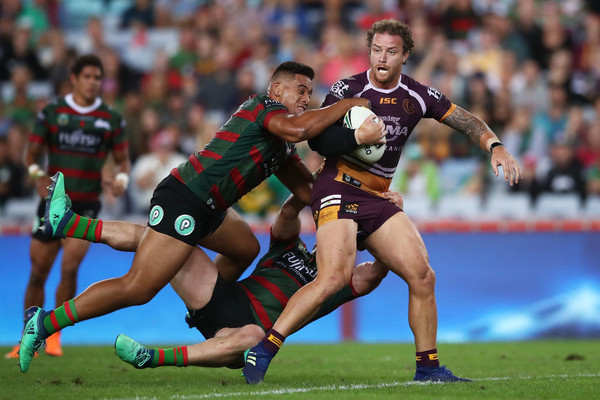 The Bunnies may have got the lead again with a penalty goal shortly after, but the Broncos had received a second wind that was only enhanced by a strip from Pangai, followed by Payne Haas subbing on for his NRL debut. All that energy found expression in a massive individual effort from Oates, who scooped up the Steeden and scooted up through the ruck, eluding Tom Burgess, Gagai and Reynolds before Johnston brought him to ground just short of the line and Kennar tumbled over for good measure, but not before he’d slid the football seamlessly into the in -oal area. 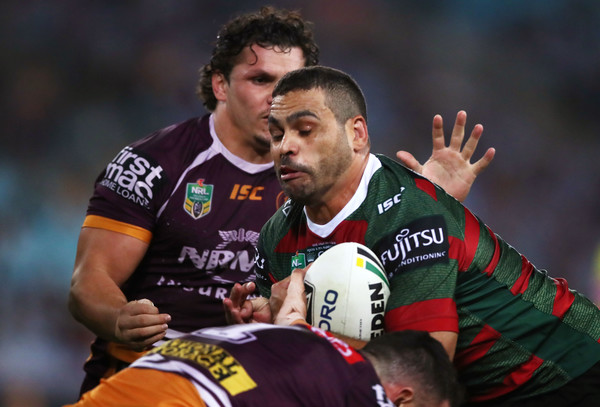 As the sixth successive game against the Rabbitohs in which Oates has put down points, this try had an air of consolidation about it, and that was only intensified with the Broncos’ next putdown. It came at the end of a seven tackle set, thanks to a poor kicking option from Reynolds, and then a forced dropout to boot. Five tackles later, Anthony Milford sent through a perfectly weighted grubber that sat up in just the right position for Roberts to pop over and slam the Steeden down to put the Broncos ten points in front once Jayamne Isaako continued his perfect night with the boot. 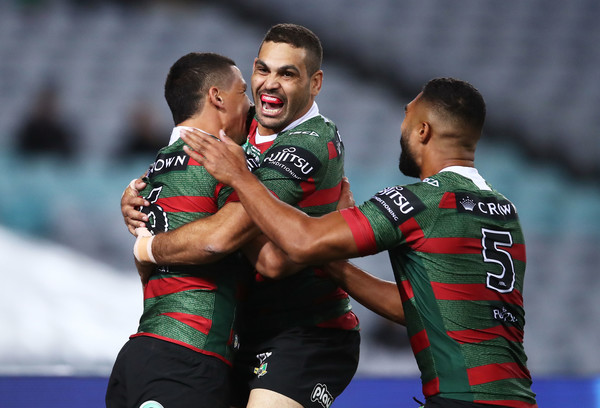 So far, Roberts hadn’t been playing as well as he usually does – it was clear that his injury was bothering him – while Milford had also been a bit quieter than normal, at least compared to Nikorima’s barnstorming performance. Seeing these two icons link up to put down what felt like the critical try of the night was therefore a bit like witnessing the Broncos starting to tie up loose ends, circling the wagons and organising themselves as they got set to maintain their lead in the last ten minutes. 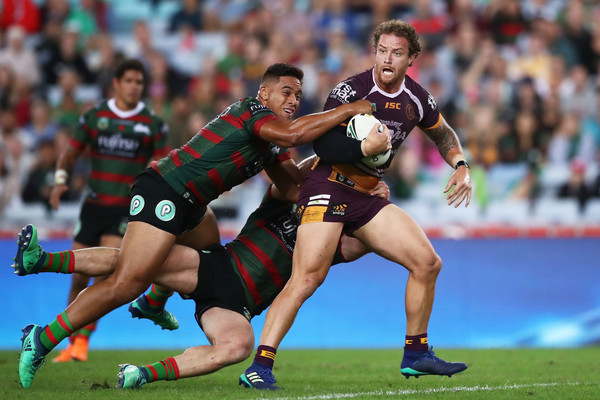 As the last part of the game wound down, it initially looked as the Bunnies not might have that much chance of a comeback. Whether it was Walker throwing the footy behind Johnston after breaking into open space, or some miscommunication between Doueihi and Gagi during a critical tryscoring opportunity on the wing, the Rabbitohs started to falter, showing more and more signs of exhaustion as their game got more disheveled and disorganised. A line break from Sutton changed that, however, bring the scoreline to four points with only five minutes left on the clock. 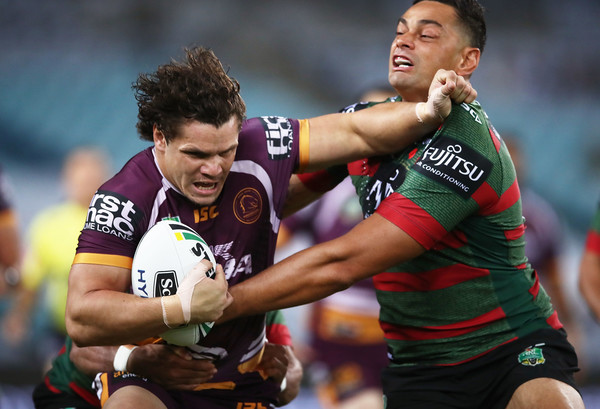 The Broncos looked set to maintain their lead on the back of a mad dash up the left of the field from Boyd, but the Rabbitohs survived without conceding points, and found themselves again attacking the Brisbane line only three minutes left to go. With Johnston coming to ground on the last tackle, however, and Inglis offloading to Sam Thaiday in the last thirty seconds, the game was over, in a deflating sequel to South Sydney’s last two wins. Meanwhile, the Broncos are going to be looking to consolidate this momentum when they take on the Dogs at Suncorp next round, while the Rabbitohs have a big task on their hands facing the Knights at Hunter.