Things have changed considerably since the Eels and Tigers last met in Round 4. Last week, Parramatta managed a stunning 44-10 win over a Manly outfit that has decimated them 54-0 in Round 2, while the Tigers had suffered their first really decisive loss of the 2018 season following the golden point debarle against the Broncos in Round 2. If Parra were anxious to prove that last week’s win over Manly was no anomaly, then the Tigers were just as keen to prevent their loss against the Knights turning into a losing streak, producing an apprehensive match for both sides.

While both teams managed a penalty goal in the first fifteen minutes, it took a while for us to see the first try, thanks in part to some sloppiness that set in around the ten minute mark. When the first four points did come, they started with a good decision from Corey Thompson to let the Parramatta high ball bounce, watching it as it hit the corner post and went dead. Down the other end of the field Esan Marsters slammed through the line and put in an enormous fend on Kaysa Pritchard, a cathartic sight fror Tigers fans given Pritchard’s pair of enormous hit-ups on Robbie Rochow and Luke Brooks earlier in the game, the first of which had forced a handling error and the second of which had immediately preceded another error from Chris Lawrence. 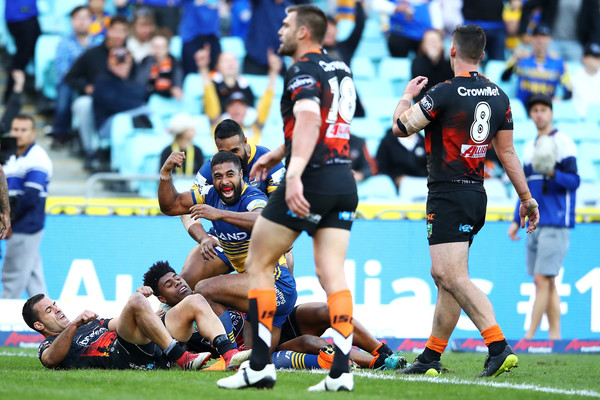 Meanwhile, Thompson was burning up the middle of the field for the play he knew was coming, getting himself in the perfect position for Marsters to send the Steeden across to him after he’d drawn in Clint Gutherson and forced his fellow fullback to commit to the tackle. Only Daniel Alvaro came close to catching up and bringing Thompson down, but even he was too far to stop the former Widnes Viking from setting up Marsters for an easy conversion with a putdown right beneath the posts.

Any momentum the Tigers might have accrued was deflated, however, when Josh Aloiai lost the ball during a hit-up on the first tackle of the next set, gifting the Eels possession and a fresh run at the visitors’ line. From there, Tony Williams almost crashed over, only for a low ankle tap from Brooks to get him to ground in one of the better David-on-Goliath efforts of the last few weeks. Still, it came with a penalty, gifting Parra a fresh set of six, and Corey Norman the opportunity to send a perfectly weighted kick to the left side of the field, where Bevan French was preparing for it. 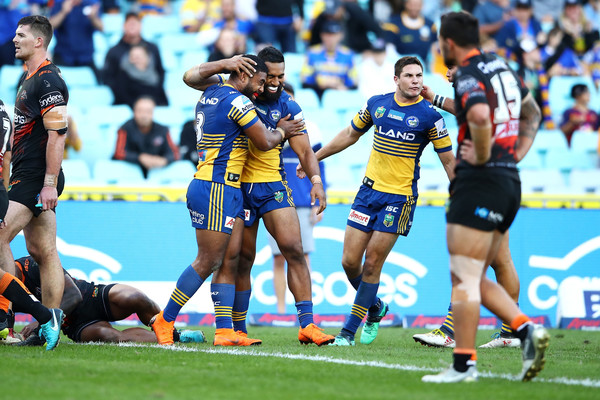 At first, David Nofoaluma seemed to have read the play and got there first, only for French to showcase his extraordinary agility by jumping over the big winger to simply steal the Steeden from him, before tumbling over and landing it just before the dead ball line as he somersaulted into touch. It was a move that looked even more precise and delicate in slow motion, as French leaned out his arm to ground the ball before him, for what almost looked like a soft try, so elegantly was it done. 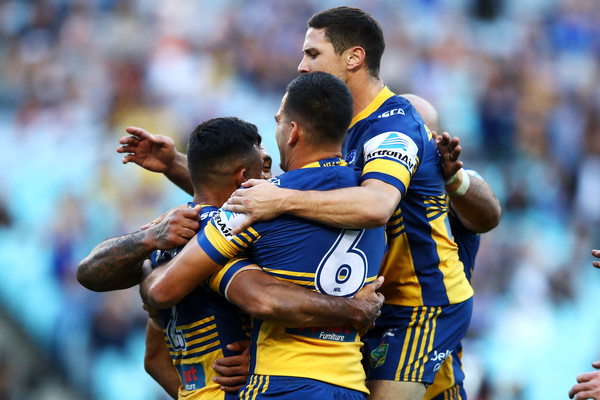 While Mitchell Moses may not have added the extras this time, he more than made up for it six minutes out from the end, when he received a short ball from Norman on the right edge, got a hand free during a massive combined tackle from Brooks and Lawrence, and popped the ball over to Michael Jennings to score in the corner. You could have made a case that it was a forward pass, but with an on-field ruling of try the Tigers had to cop it and search for a way to burst through the six point deficit that opened once Moses booted the ball through for his first conversion of the day. 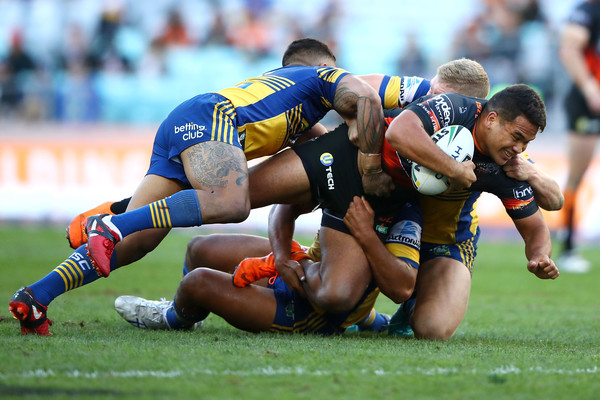 If Jennings’ four points were classy, then the next try was downright surreal, thanks to some terrific deception from Brooks right on the Eels line, where he made as if to send the footy backwards only to send it across to Matt Eisenhuth to jog through the defensive line as leisurely as imaginable without a single Parra player getting a hand to him. While he passed Moses and Alvaro on his way, the gap started with a terrible misread from Kenny Edwards, who actually slid away from the big Tigers prop instead of completing what should have been a fairly clear and manageable tackle.

For a moment, the Tigers looked set to capitalise further upon their momentum, with Brooks putting in a mammoth effort to scoop up a dangerous long-range kick from French and bring it back to the twenty. Still, a penalty from Marsters a couple of sets later ensured that the Eels were the next to score, thanks to a brilliant offload from Manu Ma’u and a low pass from Kaysa Pritchard that sent Brad Takairangi across, putting Parramatta in front once again when Moses slotted through the two. 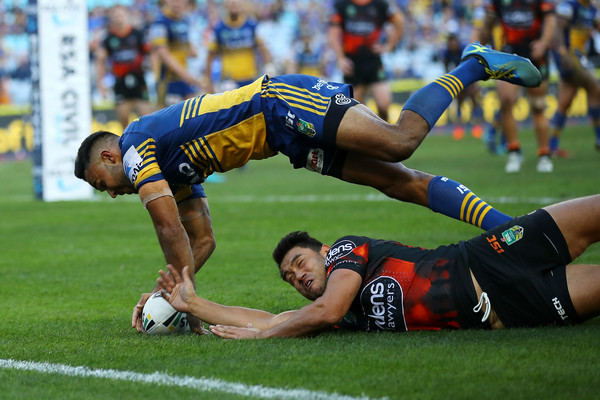 For a game in which the lead had mainly been advanced by two or four points at a time, it felt like the Tigers would be the next to cross over, and so they were, off the back of a terrific pair of linkups – the first from Chris Lawrence to Corey Thompson, who almost made it to the line with a barnstorming run and near tackle bust; the second from Mahua Fonua to Benji Marshall, as the massive winger made it right to the chalk before handing the ball across to his halfback to put down another four.

At first, it actually looked as if Benji hadn’t made it, but the replay showed that while he might have lost the ball on his way to the ground, he did manage to regather it between his hand and body just before finally putting it down. The Tigers didn’t get long to celebrate, however, as the rollercoaster continued a couple of minutes later when Ma’u took advantage of some quick line speed from Parra to bust through a barely-formed tackle from Benji to put down four points of his own, returning the advantage to the Eels once again as the game wound down to the final ten minutes. 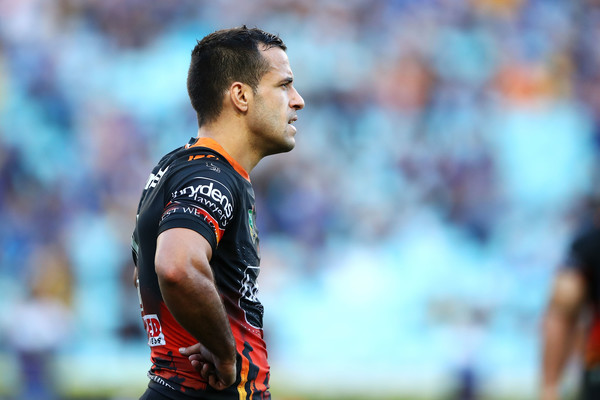 As it turned out these were the last points of the night, as the Tigers showcased some of their messiest play of the entire season in the dying moments of the match, from Ben Matulino’s inexplicable decision to dive on the ball during the last tackle of the second last set, to Josh Aloiai putting the ball down on the final set, culminating a pretty scrappy night from the big frontrower. It was Pritchard who enacted the tackle, and who now turned his big hits on Lawrence and Brooks into a brutal trilogy. 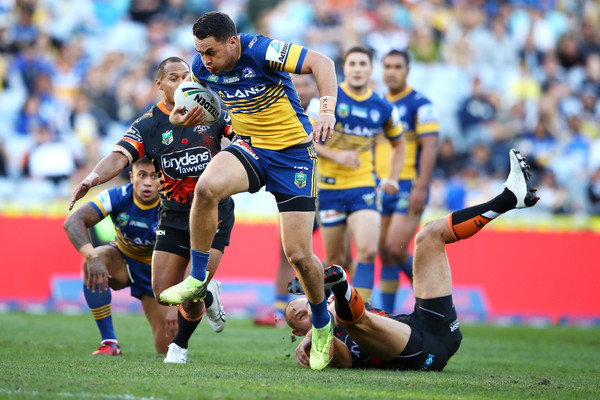 The Tigers are going to be desperate, then, to prove that these two successive losses don’t constitute a losing streak when they take on the Warriors in New Zealand next week. Meanwhile, the Eels are going to be just as anxious to prove their their two successive wins do form the start of a winning streak, and will surely be bringing everything in their arsenal to Woolooware when they take on the Sharks at home.