Both the Knights and the Bunnies have felt on the verge of a winning streak over the last couple of weeks. On the one hand, Newcastle have won two in a row over the Wests Tigers and the Sea Eagles, while South Sydney had enjoyed impressive victories over the Roosters and then the Raiders before going down by a mere try to the Broncos at ANZ last round. For both outfits, then, Friday night’s match in Newcastle felt like it could be a tipping-point for the next part of their season, and a crucial moment in consolidating the best of what they’ve offered up in 2018 so far.

No surprise, then, that both teams ran onto the park determined to score, resulting in three tries in the first ten or so minutes of the match. The first came from Robert Jennings on the first Bunnies set, thanks to an inspired linebreak from Alex Johnston, while a terrific dummy from Damien Cook cleared up some room for Cody Walker to put down four more points a couple of minutes later. Finding himself confronted with a sea of blue and red bodies, Walker just mirrored his hooker’s movements, dummying to the right before burrowing through the defence and getting to ground.

With Adam Reynolds as reliable as ever, the Bunnies were 12-0 with half as many minutes on the board, although the Knights recovered immediately, thanks to Kalyn Ponga cleaning up the high ball spectacularly and then looking dangerous back down the other of the field shortly after. As the ten minute mark approached, Shaun Kenny-Dowall bookended a superb Knights set in a similar way, breaking through the line with a dummy half run and then scoring in the corner a couple of tackles later.

After such a dominant opening from South Sydney this was a massive shift in momentum, even if Ken Sio’s aborted conversion reiterated just how perfect Reynolds’ boot had been for the first two tries. While the Knights may have scored, then,, and scored early, they were still one-third of the Bunnies’ score at 4-12, with Reynolds’ brilliance continuing onto the next four points South Sydney put down.

It started, as points so often do, with a terrific kick from the young halfback that forced Conor Watson to punch it into touch with Cameron Murray hot on his heels. For a moment, it looked as if the Knights had taken control of the dropout, thanks to a massive kick that bounced and skidded all the way back to the Bunnies’ thirty and turned it more into a regular set than a dropout. Still, the cardinal and myrtle barged their way back up the field on the back of a hard run from Tom Burgess, with Johnston ending with a dash that was almost as productive as his opening linebreak. 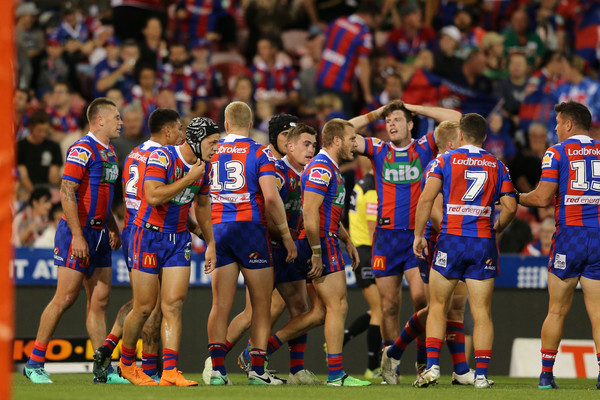 This time, it didn’t result in points, but it did set the stage for Reynolds to put in an enormous parabolic pass to get the Steeden right out to the edge where Campbell Graham was unmarked, and ready to put down the first try of his NRL career. It was the perfect way for the Bunnies to recoup their opening momentum, but it didn’t take long for the hosts to strike back, with Ponga taking the somewhat uncharacteristic decision – at least for Newcastle – to offload in a clutch tackle, resulting in another fifteen metres and a penalty to boot for the blue and red army.

It was a concise summary of how Ponga can expand and elasticise the Knights’ structure, and the first in a sequence of plays that turned this into arguably his most impressive outing of the 2018 season – the first game this year, perhaps, in which we’ve really glimpsed the extent of his rugby league genius. At the other end of the field, the Knights were still high on that offload, with Jack Cogger playing an instrumental role in a huge swing to the right after there was nothing doing in the left corner, and Ponga more than matching Reynolds’ harbour bridge effort with a huge, looping pass out to Sione Mata’utia, who read his mind perfectly on the wing.

Catching the footy and getting it under his arm in a single split-second motion, Mata’utia took Greg Inglis and Robert Jennings utterly by surprise, ricocheting off his right foot and spinning them around him before he came down half a metre out from the chalk, where he reached out an arm to clock up another try for Newcastle. Once again, Sio failed to add the extras, but the Knights had started to build momentum now, even if the first half still – just – seemed to belong to the Bunnies.

That all changed, though, in the last couple of minutes, with a series of quick play-the-balls initially suggesting that Newcastle might score on the restart, only for Inglis to make up for having let Mata’utia through with his best tackle of the night. Still, on the next set Ponga almost made it to the line and, with three seconds left on the clock and one tackle to go, he sent a huge pass across to Mata’utia, who then mirrored Ponga with an even higher pass to SKD for his second try of the evening.

You had to assume that the Bunnies were already mentally in the sheds by this point, since this was easily the softest four points of the night so far. Meanwhile, Ponga was resplendent, having gone from competing against Reynolds to simply competing against himself, and challenging himself more emphatically than in any game so far in 2018. Nevertheless, the next forty minutes belonged to the Bunnies, thanks to a botched try from the hosts that was the biggest turning-point of 2018.

It started a couple of sets into the second half with a linebreak from Sione Mata’utia, who made amazing metres but somehow didn’t quite orchestrate things enough to shift it across to Ponga, who was running up on the inside for just that reason. Yet somehow the Knights regrouped, sending the ball across to the left edge where Sio appeared to have scored four points that were all the more cathartic for Mata’utia’s frustrated effort, only for the replay to show that he’d dropped it just before scoring.

It was the kind of mistake that you rarely see in first-grade footy, and a pretty dispiriting moment for the Newcastle winger after a fairly scrappy night and two missed conversions. Things just got worse for Sio, however, on the next set, when he missed a corner kick from Reynolds and left the football open for Dane Gagai to scoot in and get it to ground, compounding his missed try with a missed trysaving opportunity, now having bled twelve blue and red points in the space of a minute.

Every player has their howlers, however, and this was definitely the nadir for Sio, who got better as the game proceeded. Still, the Bunnies had all the momentum, and a quick play-the-ball from Jason Clark set up Damien Cook to make yet another argument for New South Wales hooker shortly after, as he showcased some deft footwork to dodge through the line and score four points of his own, bringing the tally to 12-30 after Reynolds had added the extras – a pretty sobering prospect for the Knights after managing to get so close, in such spectacular fashion, in their pair of tries towards the end of the first stanza, which now seemed like a lifetime away.

As the minutes wound down, and the Knights remained scoreless in the second half, Mitchell Pearce’s absence started to feel more and more of a factor. While it had been obscured by Ponga’s terrific form in the first forty minutes, the shock of Sio’s uncharacteristic clumsiness required someone like Pearce on the field to inject organisation and focus to the team around him. Luckily for the home fans, a short ball from Ponga sent Lachlan Fitzgibbon through Inglis, Walker and Jennings, but it was too little too late, even if Sio did clock up his first conversion of the evening too.

Small consolation, too, that Ponga had distinguished himself once again, since with a scoreline of 36-18 after a last-minute try from Greg Inglis out on the left edge of the field, this was exactly the definitive victory that the Bunnies were looking for, and a critical source of motivation and inspiration when they take on the Dragons next week. Meanwhile, the Knights are going to have to bring everything their arsenal against a Panthers outfit desperate to prove that they can still maintain their season in the absence of Nathan Cleary, Josh Mansour and Dylan Edwards from their lineup.