Sunday afternoon’s match at UOW Jubilee Oval was easily one of the most hyped of the 2018 NRL season to date, and may well be a dress rehearsal for the 2018 NRL grand final if the form of these two teams so far is anything to go by. On the one hand, the Dragons have only lost once, to the Warriors, while the Storm have made up for a slow start with a series of barnstorming victories over the last few weeks.

Any sense that this would be the kind of immediate landslide we’ve come to expect from the purple army was put to bed, however, with a series of errors in the opening minutes of the game. From a mistake on the second tackle of the match from Nelson Asofa-Solomona, to a bad kick from Billy Slater who booted the footy out on the full, to a further error from Asofa-Solomona who came out of the line for some high contact on Cameron McInnes, this looked a bit more like the Melbourne Storm we saw earlier in the season than the team that smashed the Warriors to bits last round. 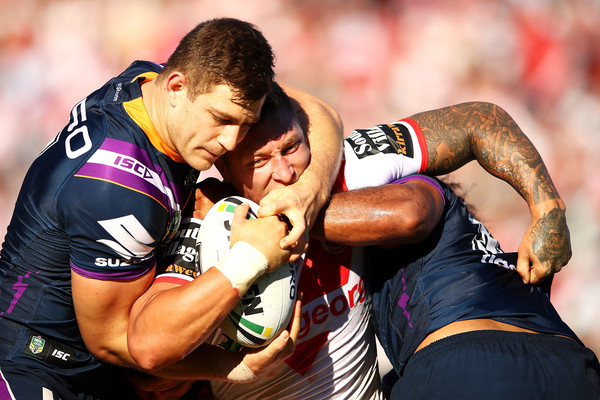 On the other side of the Steeden, the Dragons started with some of their best football this year, clocking up a penalty goal and then their first try after a brilliant grubber from Ben Hunt forced Josh Ado-Carr to take the football into touch. Two tackles later, Euan Aitken put down his sixth four-pointer of the season after McInnes drew in the defence and forced the Storm to slide across to the right edge, before a short ball from Hunt set up Aitken to slam right through Slater and score.

The Dragons didn’t let off, either, with Widdop showcasing not one but two perfect fifth-tackle kicks to put another two points on the board. After Suliasi Vunivalu failed to clean up the first, Nene Macdonald got a hand to it and shifted it over to his fullback, who booted it a second time and forced Slater, under pressure, to smash it into touch. While Will Chambers may have intercepted the football on the third tackle of the subsequent set, the replay showed that he’d come off his line years before the ball had cleared the ruck, forcing him to start the long walk back up from the other end of the park, where he’d grounded the ball under the posts just in case.

Watching Chambers break free from the Dragons and sprint up the other end of the field had all the makings of a classic Melbourne moment, so there was something especially deflating about seeing it called back, not least because the big centre’s premature movement had suggested a certain lack of confidence about his line in the first place. While Widdop may have slotted through the penalty to bring the score to 10-0, all the Storm needed was an error to start to make some amends, and they received it after Widdop was penalised for tackling Munster’s leg during a kick. 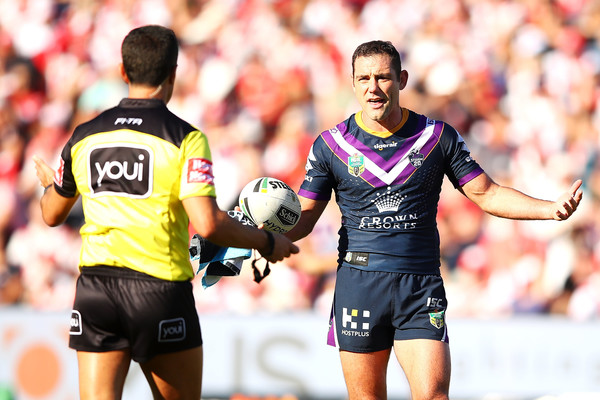 From there, all it took was a superb cut-out pass from Slater to Ado-Carr for the Storm to cross over on the second tackle, and yet with Cameron Smith’s conversion bouncing off the very tip of the uprights the Dragons remained a converted try ahead. Shortly after, Ado-Carr and Justin Olam dragged Matt Dufty into touch, and the Storm started marching back down the other end of the field, where a cut-out pass from Slater to Ado-Carr looked to have produced the second Melbourne try, only for it to be called back for one of the more curious refereeing decisions in 2018.

The reason given was that interference from the Dragons at the beginning of the tackle had prevented Sam Kasiano from completing a correct play-the-ball, meaning that Slater and Ado-Carr’s combination, as brilliant as it been, couldn’t constitute a try, just because the footy had never been in play to begin with. As much as Smith might have remonstrated with the refs, the Storm had to swallow the bitter pill of being granted a penalty rather than the four-pointer they thought they’d scored. 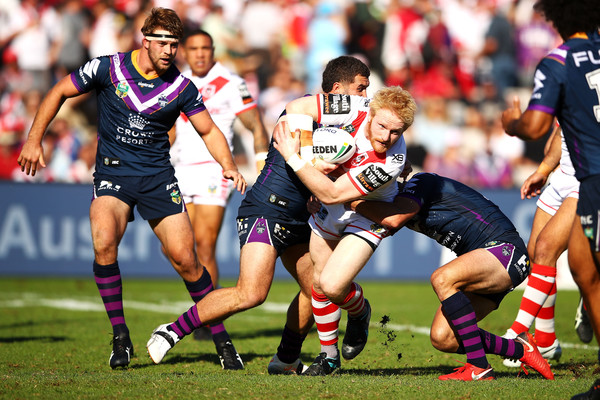 No surprise, then, that the Storm chose to run at the line rather than take the two – a decision that seemed to have provided some closure when Cameron Munster burrowed through the line and got to ground on the back of a quick play-the-ball. The onfield ruling was try, and in yet another blow for the Storm the replay showed that the young five-eighth had come down short of the line, where Tyson Frizell had completed the tackle, forcing him into a double movement to place the ball over it.

It was an extraordinarily dispiriting pair of sets for the Storm, and their desperation set in almost immediately, culminating with Chambers and then Vunivalu trying to burrow over during one of their last sets instead of sending the Steeden back for a fifth-tackle kick, as if trying to restore Munster’s near-try. In the final minutes of the first half, a messy pass from Slater to Brandon Smith gave possession back to the Dragons once again, while a penalty on the next tackle saw Widdop add two more. 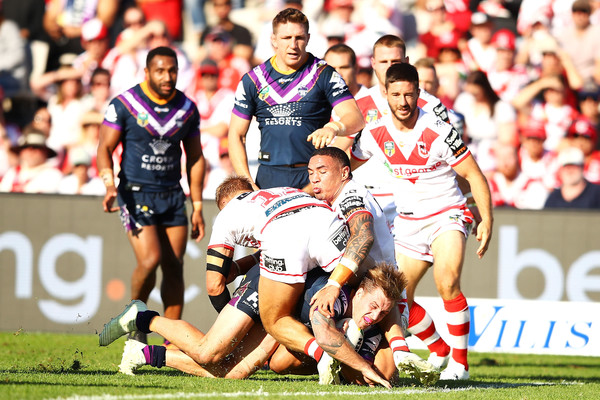 In any other situation you’d expect the Storm to come back resurgent after half time, but the Dragons are at the top of the ladder at the moment, and were equally determined to retain the momentum that they’d garnered so far. Two minutes into the second stanza, McInnes managed to split the defenders and crash over, thanks in part to an injury that Cameron Smith seemed to have sustained on the previous tackle, and which left him clutching at his chest as the St. George hooker went over.

Over the next couple of minutes Smith’s discomfort seemed to spread to the rest of the team, since while Jeremy Latimore may have coughed up the footy on the second tackle of the restart, Kasiano returned it one tackle later, allowing the Dragons to start marching back up the other end of the field again. With Slater also starting to tire, the Melbourne defence looked utterly non-existent during this sequence, allowing Lafai to clock up another four points in the wing, bringing the scoreline to an imposing 24-4 once Widdop had added the extras as reliably as ever. 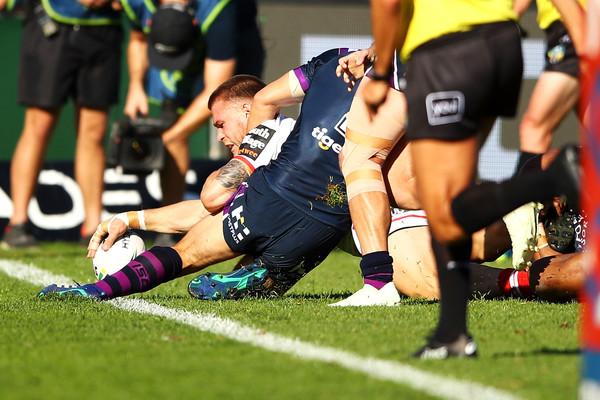 The pattern more or less continued for the next ten minutes, from an intercept from Dufty that disheveled the Melbourne defence, to a forward pass from Slater that undercut the most sustained attacking opportunity that the purple army had enjoyed this half. For a moment, the Storm looked like they might be back in the game after Ado-Carr collected a huge cut-out pass from Munster in one hand and then burned up the sideline to put down Melbourne’s second try of the afternoon.

Once again, however, the visitors couldn’t manage the conversion, while Aitken regathered the Dragons almost immediately with a double of his own, getting a hold of the footy about fifteen metres out from the line and then simply dancing through a pair of ankle taps from Munster and Kenny Bromwich to score directly beneath the posts, setting up Widdop for his easiest and most fluid conversion of the afternoon. 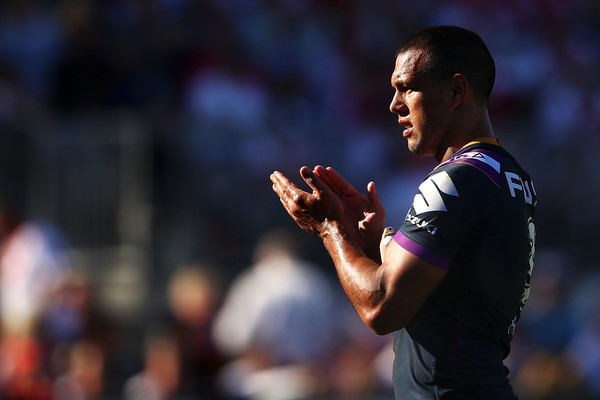 As quickly as Ado-Carr had broken through the line, then, so had the Dragons resumed their twenty-two point lead, in what was starting to feel like one of their most resounding and emphatic performances of the 2018 NRL season. With Melbourne called offside eleven minutes out from the end, St. George got two more points to put them four converted tries ahead, while another forward pass from Slater to Ado-Carr quashed whatever momentum the Storm could build in its wake.

Things just got worse when Asofa-Solomona compounded his errors from the first half of the game with a high shot on Widdop, and while a hat trick from Ado-Carr and Smith’s first conversion of the afternoon got Melbourne up to 14 points, the game ended in a fairly dominant way for the Dragons, with an intercept from Hunt on the second tackle of the last Storm set saying it all. From there, the Red V got one last dropout, and with Smith booting the footy out on the full Widdop lined up for two more points after the siren, bringing the home team to a twenty-point victory.

All in all, then, this would have to count as one of the most significant games of the 2018 season for the Dragons – possibly the most significant since they introduced their new-look side with their opening win over the Broncos at Kogarah. They’re going to be keen to maintain that momentum when they take on a resurgent Rabbitohs outfit at ANZ next week, while the Storm will be looking to utterly smash the Titans in the first part of Saturday’s double-header at Suncorp to regain some of the pride they’ve showcased in their wins over the last couple of weeks of football.