Penrith came away with a resounding 29-18 win over the Knights at McDonald Jones Stadium on Friday night, in what felt like a consolidation game – a summary of the best moments of their 2018 season so far. They were the first to score, a mere three minutes in, thanks to a high kick from James Maloney, and some further pressure from Corey Harawira-Naera, which saw Kalyn Ponga fumble the first really important catch of the game for Newcastle. 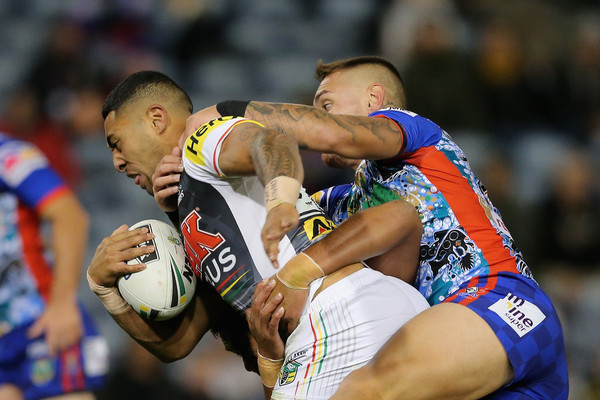 On the first tackle of the repeat set, Reagan Campbell-Gillard made a hard run at the line, and then collected the footy from Peter Wallace a couple of tackles later to crash over, as Trent Merrin ran a decoy to open up the defensive line before him. Given that the Panthers have conceded the first try in seven out of nine games so far this year, this was an encouraging start from the mountain men, especially for an away game. 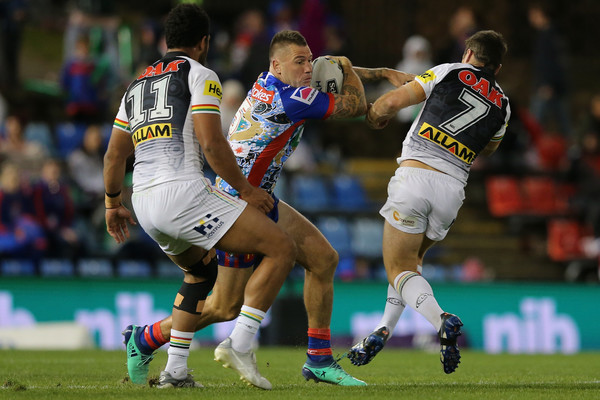 They suffered a bit of a lull, however, after letting a high ball from Brock Lamb bounce, allowing Peter Mata’utia to get to the play in time to collect it. If he hadn’t knocked on the footy himself, the Knights would have stood a good chance of scoring, but the Panthers didn’t respond all that well to the letoff – or, rather, Merrin didn’t respond all that well, leaking back-to-back penalties for a slow play-the-ball and for spending too long in the tackle respectively. 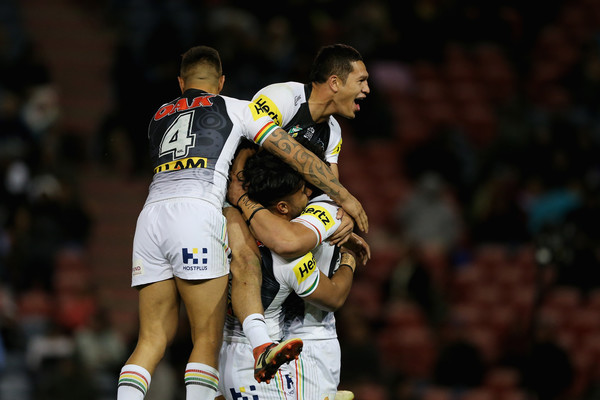 To an extent, you could perhaps attribute that to Merrin’s hand injury from the game in Bathurst the week before. In any case, the visitors regathered quickly, as Viliame Kikau forced an offside penalty from Conor Watson, and another terrific Maloney kick forced a goal line dropout after Lamb found himself caught with the Steeden behind the line. 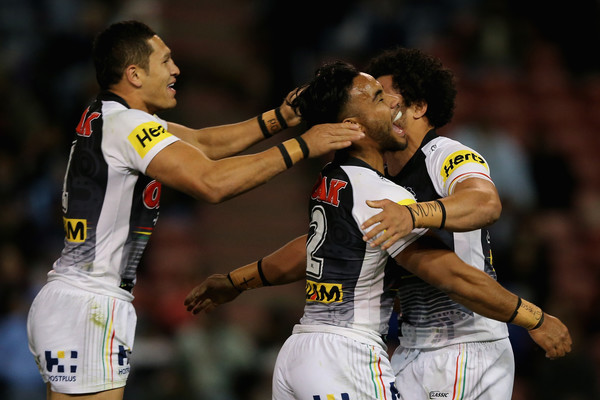 Nathan Brown would have been kicking himself when Josh King conceded a penalty on the fifth tackle, and Penrith also seemed to realise that this was their chance, consolidating towards the end of the tackle count for some of their most focused plays of the night so far. It all culminated with a skittering run from Dallin Watene Zeleniak, who shifted the football to RCG, who took it right up to the line in turn. 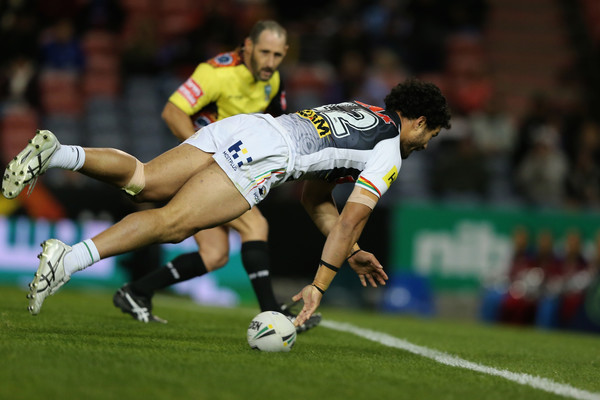 For a moment, it looked as if the big Penrith prop might just manage the offload of the night, but the Knights managed to wrap him up pretty successfully. It didn’t make much difference, though, since Tyrone Peachey made a blistering dash off the right foot a tackle later to slice past Ponga and Herman Ese’ese to score a second try for Penrith – a great spectacle for Indigenous Round, as well as a testament to the elasticity of the Penrith halves in Nathan Cleary’s absence, with Maloney booting through another conversion to maintain his kicking average of 82%. 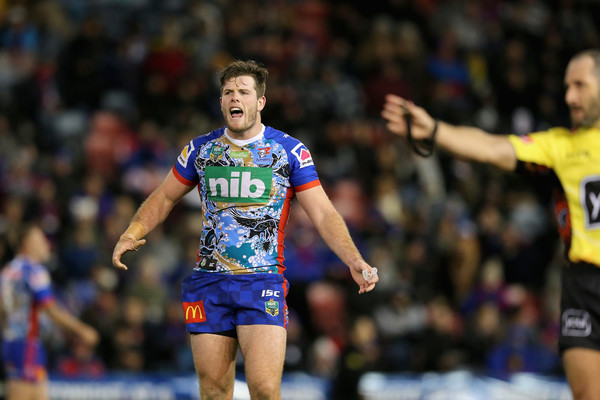 As the minutes wore on, the Panthers seemed to consolidate further, so it was a tribute to the Knights that they managed to score on their first really sustained period of possession on the Newcastle try line. More specifically, it was a tribute to Ponga, who made a beautifully timed dummy – the kind of dummy that looks slow-motion as it’s happening – to draw Peachey in out of the line, before sending the Steeden across to Mitch Barnett, who offloaded right before hitting the ground to assist Watson with the first four points of the night for the home team. 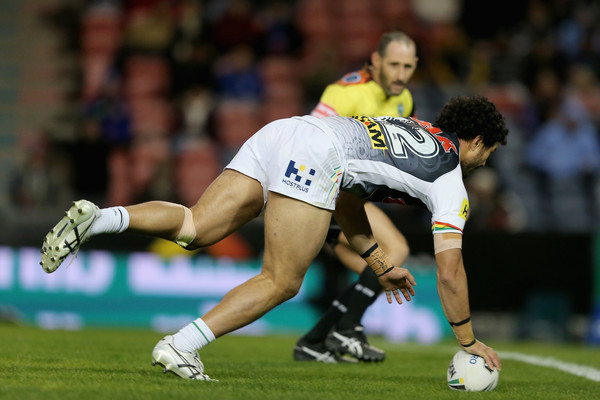 Shortly after, Wallace responded with a calculated risk, kicking and then trying to ground the ball after he glimpsed Ponga out of place. It went too far, though, granting the Knights a seven tackle set, where an error from Jacob Saifiti gave way to a barnstorming linebreak from Lachlan Fitzgibbon that sent Saifiti over a couple of minutes later, only for an obstruction from Watson on Phillips to cancel out the four points. 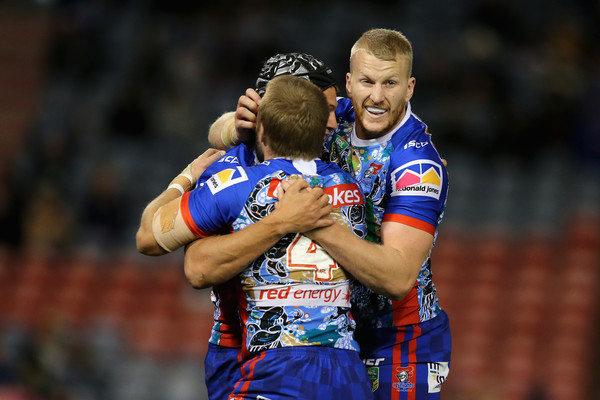 It would have put the Knights level with Penrith if they’d managed the extras, so there was a sense of frustrated momentum at this point, in what was probably one of the key turning points of the game, all things considered. On the next set, Mata’utia tried to regain some pride with a big hit-up on DWZ, but the wiry Penrith fullback barely seemed to feel it, and actually used Mata’utia to his advantage, ricocheting off his chest for one of his trademark runs along the front of the ruck. 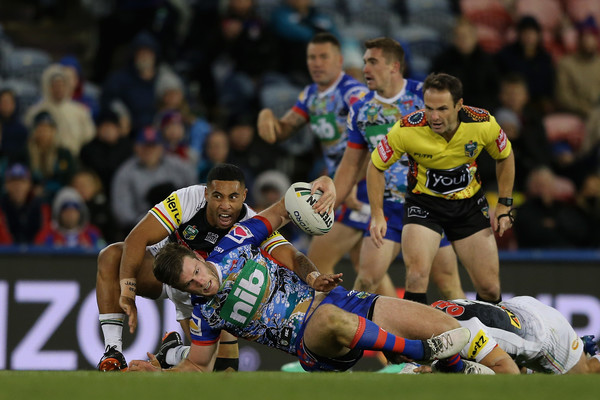 To make matters worse for the Knights, they had an opportunity to have another go at the try in a condensed form, as another terrific run from Fitzgibbon led to a linebreak from Watson, only for a truly terrible pass from Watson to Lamb to compound the ex-Rooster’s earlier obstruction by leaking yet another potential four-pointer for Newcastle. The Panthers made the most of it too, as Peachey scooped up the Steeden and careened back through a Knights attack that had barely had time to regroup in defence, so quickly and unexpectedly had the turnover occurred. 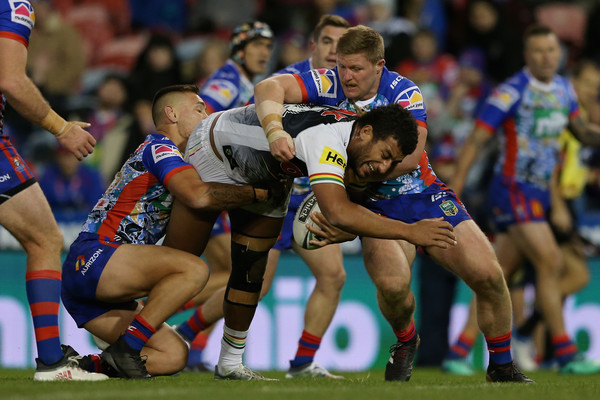 At the other end of the field, DWZ slammed down the most emphatic try of the night so far for Penrith, putting the mountain men at 18-6 once Maloney had added the extras. As the half time siren drew near, both teams tried to make a dent on the scoreboard, but they’d have to wait until the second stanza, which started with a short kick from Lamb to trap Phillips in goal. For a moment, the Knights had all the momentum, only for Ross to cough up the footy at the critical juncture. 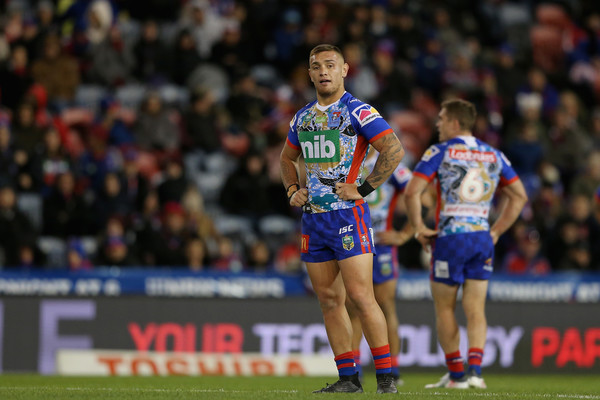 Nevertheless, a big hit from Ponga on DWZ got Newcastle possession shortly after, marking the start of an enormous period of possession and field position for the home team. First, Maloney took out the Panthers’ frustration with a slow peel on Ponga, then Peachey made another slow peel on the fourth tackle of the subsequent set, following an early ball from Ponga to Ross. One tackle later, on the first tackle of the next set, a strip from Fisher-Harris saw Maloney receive an official warning in Wallace’s absence from the field. 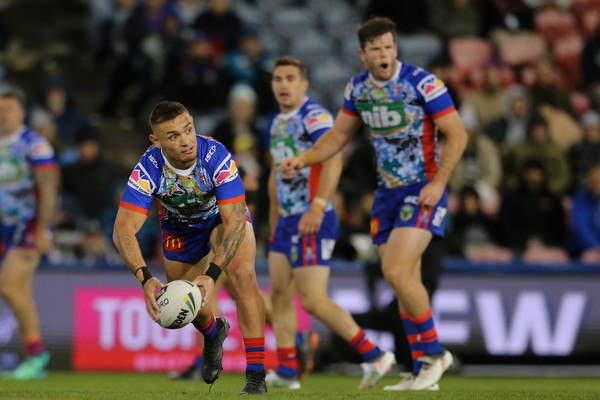 Things went from bad to worse as DWZ was momentarily downed with an eye injury after copping a fist in the face from Chris Heighington during a tackle, and was targeted accordingly by Lamb, who took advantage of his opponent fullback’s momentary disorientation to force yet another dropout for the Newcastle faithful. Yet with so much field position and possession, the Knights were starting to tire as well – they didn’t just need a try, but a really spectacular try, to make all that time with the ball feel worthwhile.

Luckily, Lamb provided just that, taking the footy up to the line and pausing for the briefest of seconds before beating Tamou and fending off Fisher-Harris to send Ponga over untouched. After so much grind and grit, there was something supremely cathartic about this break into open space, not least because of the way it culminated such a sustained period of leadership from both Ponga and Lamb in the Newcastle spine. Once Ken Sio had added the extras it genuinely felt as if the Knights had a shot at the win. 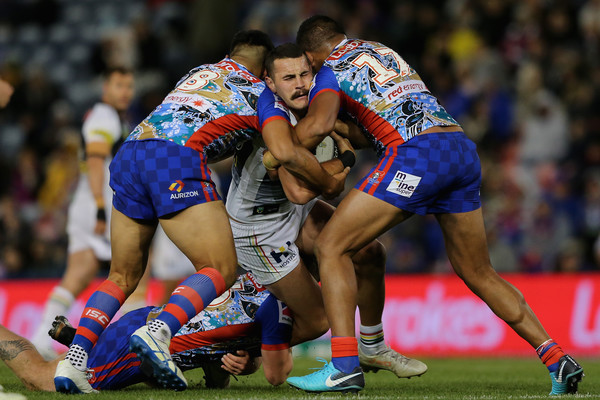 Indeed, so unarguable was this Lamb-Ponga linkup that the Panthers seemed compelled to approach the scoreline in a more tentative and hesitant way, with Maloney kicking a field goal, and then slotting through a penalty shot, to bring the mountain men to an unusual lead, resulting in a palindromic scoreline of 12-21. It didn’t last that way for long, however, as the Panthers scored their try in the most elegant and confident way imaginable – with a perfectly pitched crossfield kick from Maloney that found Harawira-Naera right on the chest. 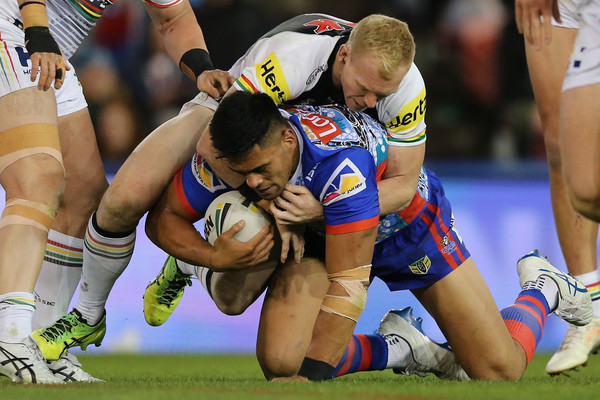 Watching the replay, it didn’t really look as if the big Penrith second-rower had had to make all that much of an effort to outleap the defending Newcastle players. Instead, Maloney’s boot had been so precise that Harawira-Naera had barely had to move, cementing the Penrith lead with a gesture of such confidence that it seemed to signal the end of the game then and there. Another penalty shot for Maloney after a leg pull from a frustrated Barnett sealed the deal, skyrocketing the Panthers to a 27-12 lead.

Three minutes out from the end, a try from Ross gave the Knights a bit of consolation, but there was no doubt that the back half of the match had gone all Penrith’s way, even or especially given the superb period of possession that Newcastle had enjoyed in the opening fifteen minutes. And the Knights are going to be keen to harness that energy, and the combined power of Ponga and Lamb, when the Titans at Cbus next week, since they very nearly could – and perhaps should – have won this one.