Things hung in the balance for both the Tigers and the Cowboys when they met on Thursday night at Leichhardt Oval. After a series of disappointing losses to the Knights, the Eels and the Warriors, the Tigers were desperate for a home win in order to prevent the last three games from settling into a losing streak. At the very least, they were anxious not to add a Leichhardt loss to that mounting tally, especially given their great record against Johnathan Thurston at their home ground. 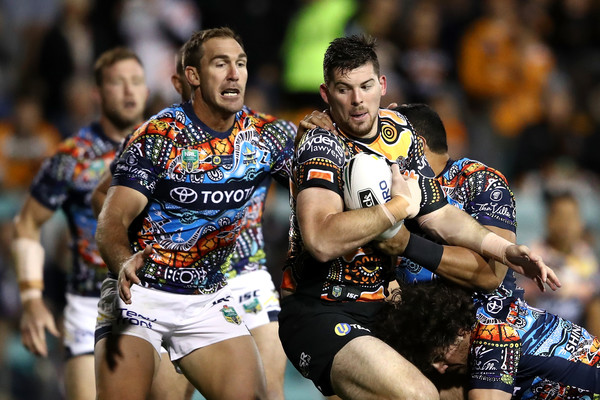 Yet that record just made this an even more suspenseful game for the Tigers, since on the other side of the Steeden North Queensland were clearly keen to use their underdog status at Leichhardt as a way of continuing to kickstart their 2018 season as well. For the first ten minutes so of the match, that tension produced a bit of a deadlock, with both teams trying and failing to make their way through the line, and both pairs of halves struggling to come up with consistently convincing kick options. 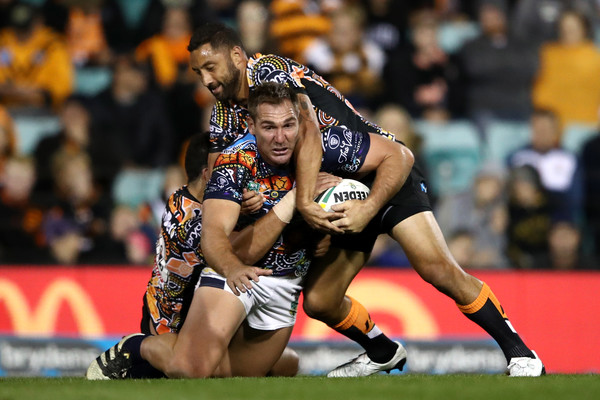 As the sets rolled by, it became clear that the Tigers needed to break the game open if they were going to assert their mastery of Leichhardt, and they did so in the most spectacular way, after an uncharacteristic error from Esan Marsters provided the Cows with the opportunity to apply some pressure and sustained field position. Kicking on the last tackle, Morgan sent the ball over to Kyle Feldt in the corner, only for the big winger to knock it back to Brooks, who took off up the sideline for one of the most spectacular runs of his career, with Morgan and Hampton in hot pursuit. 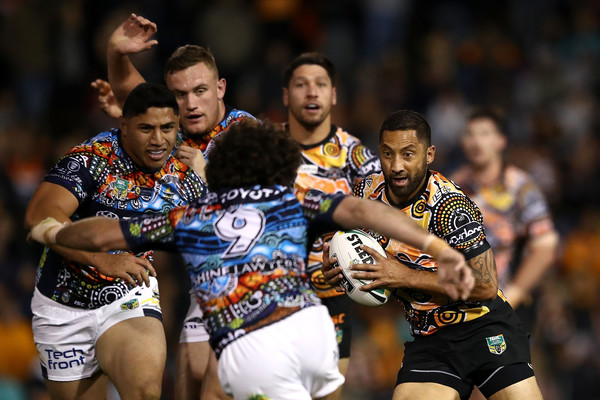 Ninety metres later, Brooks had put down the first points of the night, in one the most decisive Tigers openings at Leichhardt in years, and a testament to the young halfback’s transformation under Ivan Cleary into one of the most organised halves in the competition. While Marsters didn’t add the two, Brooks regathered them shortly after by setting the foundation for the their next four-pointer, dummying his way across to the left of the field before breaking out of a tackle from Morgan and sending the football across to Mahe Fonua who was waiting for him in the left wing. 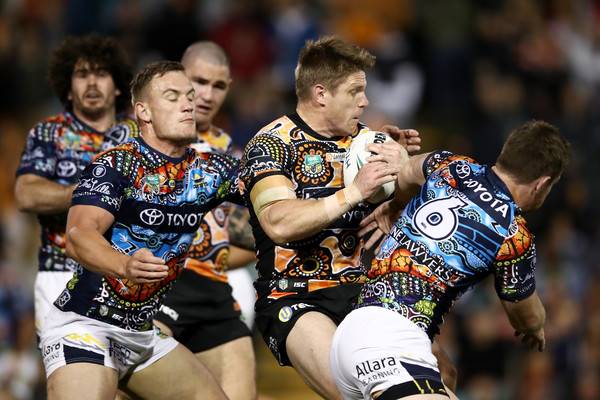 From there, Fonua put in an epic one-handed offload to Corey Thompson, who skidded and swerved up to the line before being brought to ground by a tackle from Morgan, albeit not before managing an offload of his own to Malakai Watene Zelezniak, who cruised over for four more points. Once again, the Tigers didn’t add the extras, and yet they felt more ascendant than the eight point lead would suggest, almost crossing over again a couple of sets later off the back of some great work from Thompson, only for the slightest of forward passes to hold them to eight. 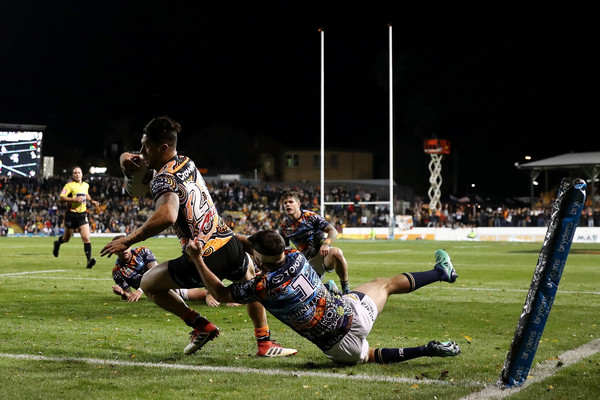 As the half time siren loomed both teams grew more desperate to score next, and yet it was the Cowboys who came up with the goods, as Thurston stamped his signature on the game with a terrific kick that sliced through the defence and then bounced backwards at an oblique angle, rendering it almost impossible for MWZ to scoop it up. Not so for Shaun Fensom, however, who shot out his right arm to collect the footy just as it was bouncing, before falling over backwards and offloading across to Te Maire Martin all in one motion, in a stunning display of grace under pressure. 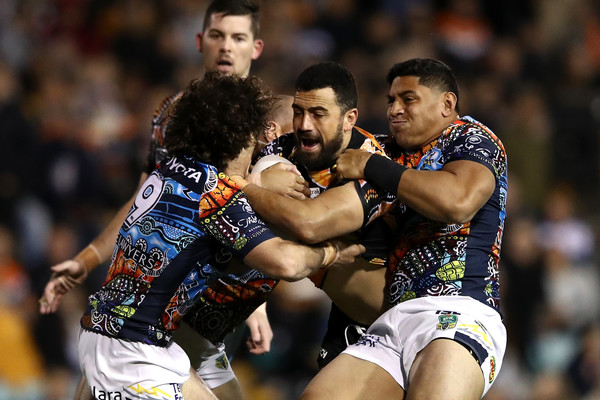 The classiness didn’t end there, though, with Martin continuing the play with a left hand fend on David Nofoaluma before beating Mahu Fonua to the uprights, where he tumbled to ground, but used the tumble to his advantage much as Fensom had before him, stretching out a hand to put down the first four points of the night for North Queensland. While Brooks and MWZ’s tries had been spectacular, this was undoubtedly the most impressive sequence of the night so far, especially once Thurston added the extras, unsettling the Tigers’ advantage at exactly the right moment to provide the Cowboys with the chance to reset things after the break. 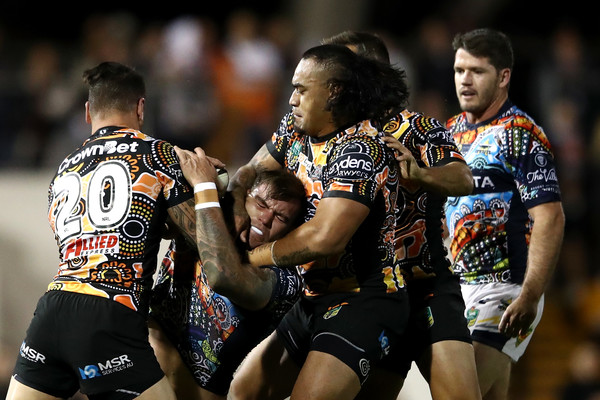 For a moment, in fact, they looked set to cross over again the first stanza, only for a terrific trysaving tackle from Alex Twal on Coen Hess and some good work from Brooks to clean up the final set. Still, the Cows suddenly had all the momentum, and yet they were unable to sustain it into the opening minutes of the second half, where three unforced errors and three incomplete sets seemed to turn their season back a couple of weeks at least, to Thurston’s first tentative return to the footy field. 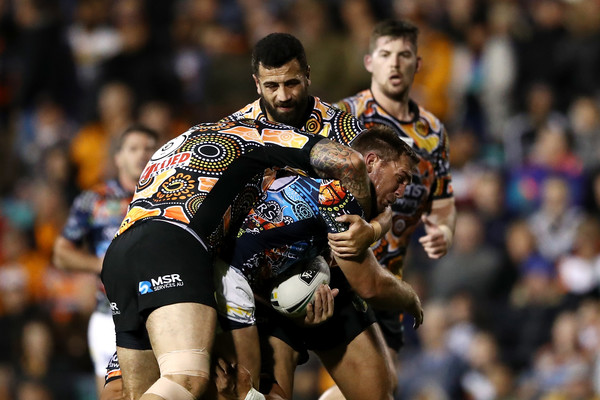 The first came from Ethan Lowe, who lost the ball midway through the tackle count, right on the Tigers line. On the next North Queensland set, Te Maire Martin lost it again halfway up the field, after having thrown what looked a bit like a forward pass to tackles before. Finally, Thurston knocked the footy on out of dummy half on the first tackle of the next set for the visitors, providing the Tigers with the scrum feed. 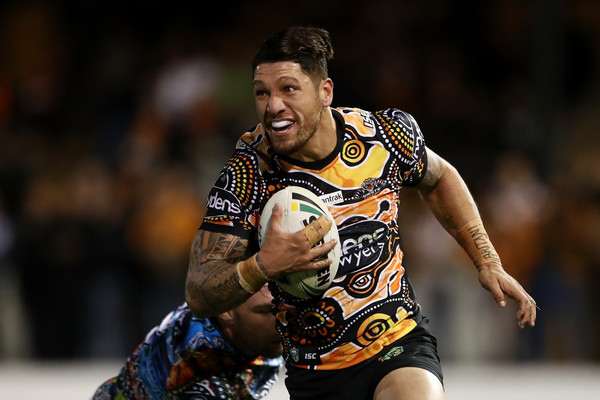 By this stage, the Cows had decelerated enough to provide the hosts with the advantage again, and sure enough the Tigers scored on the first tackle out of the scrum, in a sequence of play that was almost as elegant as Billy Slater’s combination with Cameron Munster right on half time earlier in the year. It started with some deft movement out to the right wing, and ended with a superb put-down from Nofoaluma, but the meat in the sandwich was undoubtedly Esan Marsters, who provided the connective tissue with a deft left step to get on the outside of O’Neill, forcing Antonio Winterstein to come inside and commit to the tackle in the process. 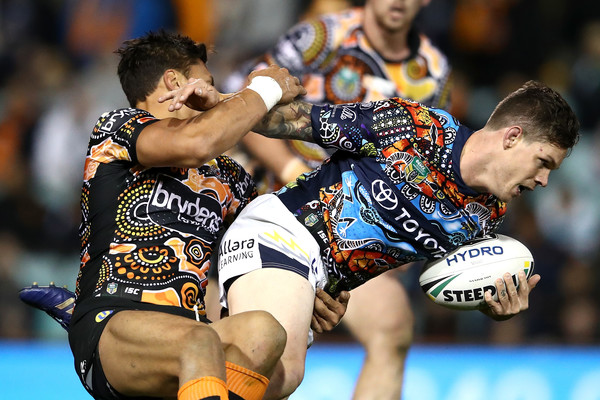 In its simplicity, economy and elegance, it was the perfect way for the Tigers to regain the momentum of Brooks’ opening run. It was equally important for the team and fans to see Marsters playing at his best, given the pivotal role he’s played in the club’s resurgence over the 2018 season. Still, with the young centre missing his third straight conversion the Tigers were only double the Cows at 12-6, despite having two more tries notched up on the scoreboard – a stat that came back to haunt them when North Queensland scored their second try of the evening a couple of sets later. 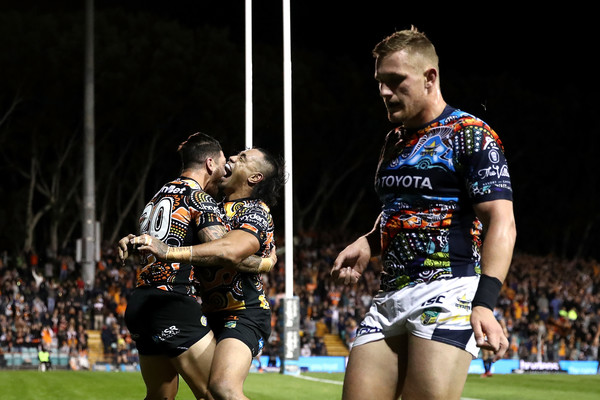 It started with a great kick from Morgan that Fonua nevertheless managed to contain, beating four defenders back into the field of play and earning the Tigers a penalty in the process. In some ways, however, it might have been better for the hosts to have given the Cows another shot at their line, since at the other end of the field Benji went for what seemed to be a pretty deft kick, only for Antonio Winterstein to scoop it up and mirror Brooks’ barnstorming run down the field, with Thurston’s conversion bringing the scoreline to 12-all, despite the three tries to two. 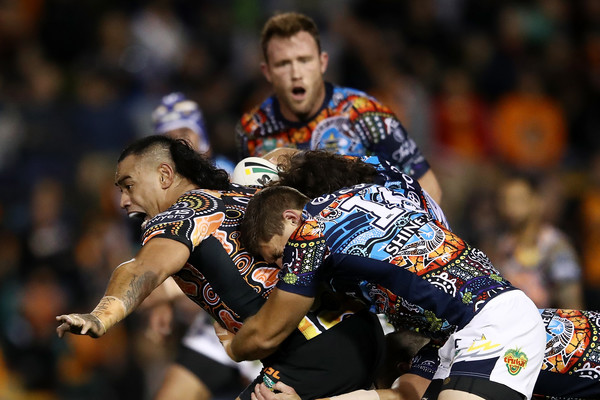 A penalty goal for the Tigers gave them the lead once again, and provided Marsters with his first two points of the night, but their advantage felt more tenuous than ever, with only a terrific trysaving tackle from Nofoaluma preventing Winterstein from clocking up a double a couple of sets later. Yet a knock-on from Matt Scott returned the rhythm to the Tigers once again, setting them up for their most spectacular sequence of the night, and a fitting culmination to Brooks, Marsters’ and MWZ’s brilliant efforts in the opening half, as well as a resounding play from Benji. 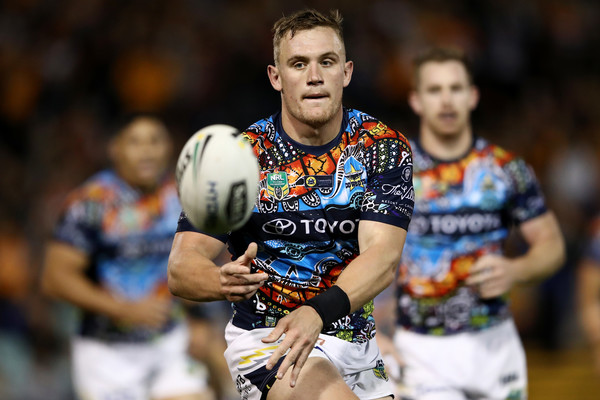 It started, strangely enough, with a fairly safe clean-up under the high ball from Winterstein, who popped it across to Lachlan Coote at just the wrong moment, sending the ball onto the grass where Russell Packer scooped it up and passed it across to Benji, who almost crashed over himself to the left of the posts. The North Queensland defence were there to stop him, but only just, and still hadn’t got their heads around the sudden change in possession as Jacob Liddle sent the footy back the other way to MWZ, who lobbed across the cut-out pass of the night to Marsters. 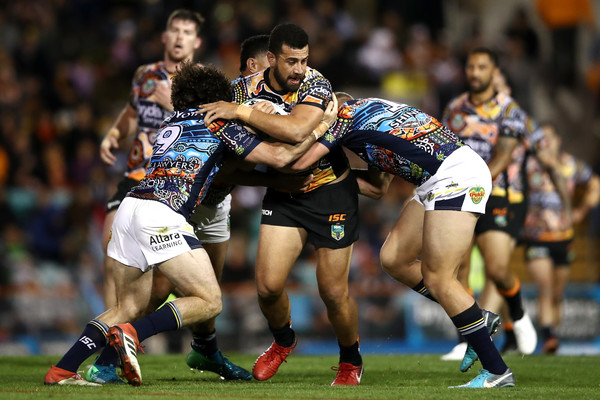 So quickly had it all happened that the Cows weren’t quite in place to prevent a play they would have seen a mile off in normal conditions, allowing Marsters to slide through fairly easily and plant down another four points to put the Tigers six ahead once again. The next minute was perhaps the most suspenseful of the game, as Marsters lined up the tee so that the escalating wind wouldn’t blow it over, but as fate would have it this was the first conversion he sent through, bringing the home team that much closer to the victory that seemed promised by Brooks’ opening run. 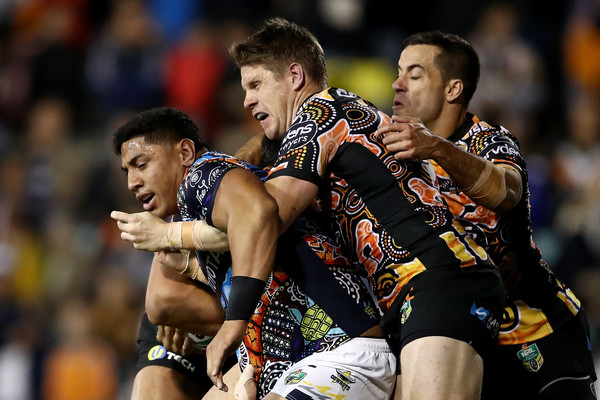 Those two points were the icing on the cake for a sequence of play and a try that seemed to both intensify everything that the Tigers had done well over the course of the night and resolve everything that the Cowboys had managed to bring against them. In other words, it was the kind of decisive gesture that the home team needed to prevent a victory being tainted by the second-stanza deceleration and deterioration that seemed to mark even their best work during the Jason Taylor era. 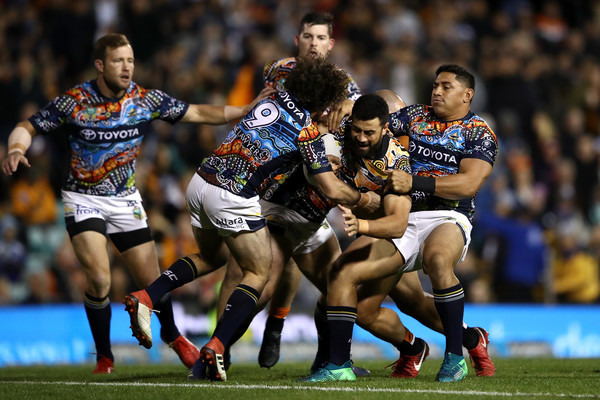 Still, the game wasn’t over, since with six minutes left on the clock the Cows still had more than enough time to put down two more tries. As the minutes wound down, though, their body language grew more tired and more defeatist, while the Tigers somehow seemed to grow more energised and determined than at any other point in the game. While neither side scored again, the 20-12 scoreline felt even more impressive for the home team given Marsters’ challenge with the boot, and will be a rallying point when they take on the Panthers next week. Meanwhile, North Queensland will be looking to regather when they face a Rabbitohs outfit desperate to maintain the drive they’ve started to showcase over the last few weeks of football.