The Warriors received an even ruder shock to their early season winning streak than their 40-point loss to the Storm when they lost 32-0 to the Roosters at Mt. Smart Stadium on Saturday night. Yet for such a landslide, and such a dramatic home loss, it didn’t start all that dramatically, with the Warriors glimpsing a number of tryscoring opportunities in the first stanza, and the Chooks struggling to really galvanise their momentum until Ryan Matterson scored the first try nine minutes out from the break.

It was also the Roosters who made the first bungles, as an error from Isaac Liu and a dangerous tackle from Dylan Napa gave New Zealand a good platform to execute an opening try. With Blake Green grubbering on the last, the Warriors regathering the ball, and David Fusitua clutching it to his chest and crashing into the corner, this seemed destined to be a boilerplate New Zealand four-pointer, only for Blake Ferguson and Cooper Cronk to spearhead a massive effort to keep the big winger off the ground. 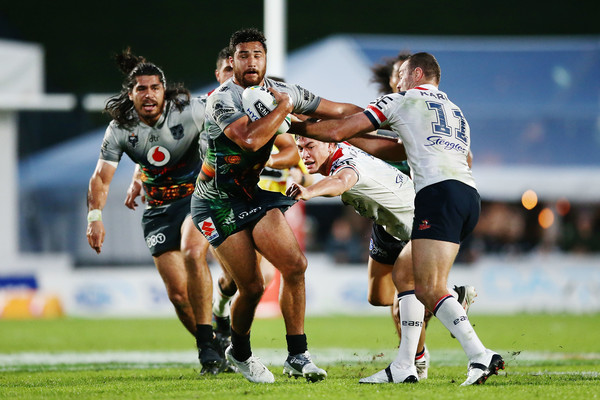 Still, a rare ball handling error from James Tedesco at the seventh minute provided another opportunity for the Warriors, who were starting to amp up their second phase play in the process, with a great over-the-head offload from Agnatius Paasi to Adaml Blair helping them get back down their end of the park a little quicker than Sydney City might have expected. Although Ferguson scooped up Green’s grubber a metre in front of the line, Green put in the kick chase of the night to team up with Paasi and Solomone Kate to drag Fergo back over, in a stunning riposte to the Roosters’ pack effort against Fusitua a couple of minutes before.

A shoulder charge from Napa saw Paasi taken off shortly after and replaced with Simon Mannering, who injected some fresh energy into the match, taking the first tackle for his 287th NRL appearance. With the Warriors’ second phase confidence growing, Blair went for an offload twice on the fourth tackle, and then took a chance for a third effort, getting the ball across to Mannering for one of the ballsier moves of the match. Yet with Mason Lino putting a bit too weight on the kick, this was another near-try for the Warriors, and another letoff for Sydney. 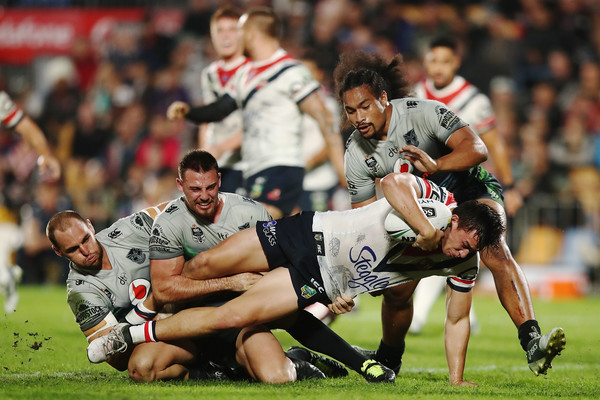 At the other end of the field, the Chooks gave Latrell Mitchell space for the first time of the night, and the change in energy was immediate. It didn’t result in a try this time, but it still felt apt that Mitchell kicked through the first penalty goal of the evening after a strip from Papali’i followed on from a last-tackle kick from Luke Keary that was knocked back by Jake Friend and then regathered by Napa. The Roosters now followed with one their best sets of the game, culminating with Keary booting the ball to Teddy, who popped it back for an offload to match New Zealand’s second phase efforts.

Keary had read the play well too, responding with a kick chase to match Green’s effort earlier in the game, only for a punishing tackle from Fusitua to force him to cough up the footy just as a tryscoring opportunity was really starting to crystallise for the Chooks. As if sensing that shift in momentum, Jared Warea-Hargreaves put in his biggest hit-up of the night on the next tackle, forcing Fusitua to lose the football in turn, and commencing the sequence that would conclude with Sydney’s first try. 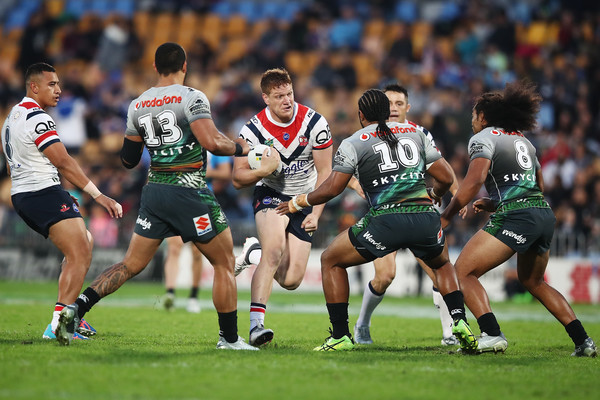 It didn’t happen right away, but there was no doubt that the momentum had swung in Sydney’s direction, especially once Roger Tuivasa-Sheck lost the footy on the second tackle under some well-timed pressure from Aubusson a couple of sets later. For a moment, the Roosters seemed to have scored off the back of it, only for a forward pass from Matterson to cause the try to be called back, although a dropped ball from Hiku gave them another shot at the line, and this time they came through.

The fact that there wasn’t even all that much pressure on Hiku – despite Mitchell being close – must have been a confidence-booster for the Chooks, since they congealed their attack even more over the next couple of sets, to the point where this could have been mistaken for a different game from the opening fifteen minutes. After a slow peel from Karl Lawton they got a penalty, and from there all it took was a long ball from Friend to Cronk, and a short ball from Cronk to send Matterson over the line for the first try. 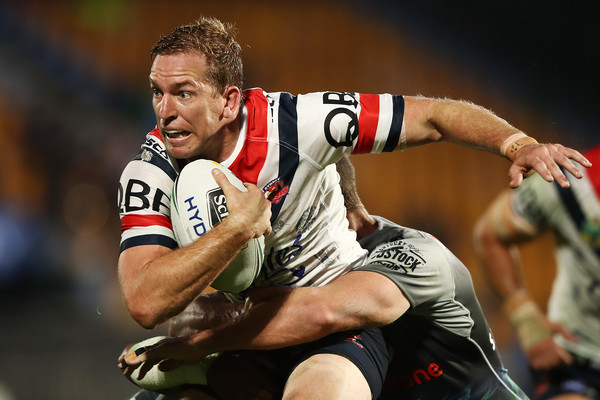 It was to be the beginning of a string of tries that weren’t especially fancy, or ingenious, or special, but just clean, clinical and professional in the best possible sense – exercises in consummate timing and organisation rather than showmanship or theatricality. Two minutes before the break, the Chooks directed all that clinical focus out on the left edge, where the Steeden moved through Friend, Cronk, Mitchell and then Manu, who beat DWZ to the turf, and made the most of a defensive misread from Hiku as well. 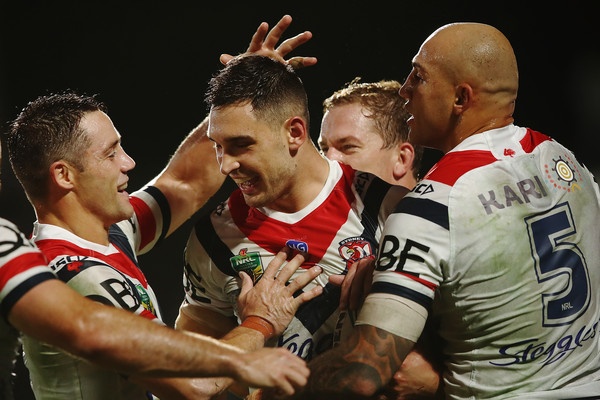 The fact that Manu had almost been off the park after his cannonball move against Dylan Walker the week before just made this try feel all the more decisive, and yet the Roosters continued that same energy after the half time break as if they hadn’t even hit the sheds, with a huge hit from Napa on Sam Lisone making it clear that they weren’t prepared to budge an inch.

Several tackles later, the Chooks consolidated on the right much as they had on the left, as Cronk came right into the line before sending the footy through Tedesco, Aubusson and then Fergo, who ground it as dexterously and elegantly as he ever has. Ferguson can be such a volatile and mercurial player that it’s always particularly powerful to see him just slot himself into a broader clinical rhythm like this, and his presence played an especially big part in centring the team in this game.

Things just got simpler and more elegant for the Roosters with their next try, as Keary put in the dummy and linebreak of the night to slip past Lisone and pop the Steeden back into Tedesco to crash over untouched. There was nothing fancy here – just clean, crisp, professional footy – and it was that simplicity that ultimately seemed to dishevel the Warriors, who just couldn’t find a way to contain the groove that Sydney City had found over the last fifteen minutes.

A lost ball from Jazz Tevaga under pressure from Nat Butcher brought the Warriors’ mistakes into double figures, but a bit of a spotty period now elapsed for the Roosters as well, forcing them to wait until the final five minutes of the match for their next and last try. First, it was a handling error from Cronk, then a second handling error from Tedesco, building a mounting sense of restlessness that was encapsulated when Mitchell got a penalty and set off for a quick tap, only to be called back because one of his team mates was offside.

The low point was probably an offload from Teddy to Kata, but the spectacle of another critical error from Tevaga helped to restore the Roosters’ confidence, while a great run from Mitchell on the second tackle of a slightly later set – ten metres while facing backwards – helped to reconsolidate the team. A minute later, Boyd Cordner almost made it over the line, only for a low tackle from Lino to hold him up, but with Lino himself taken off with a leg injury shortly after, the Warriors were forced to reconfigure their backline just when continuity was what they needed. 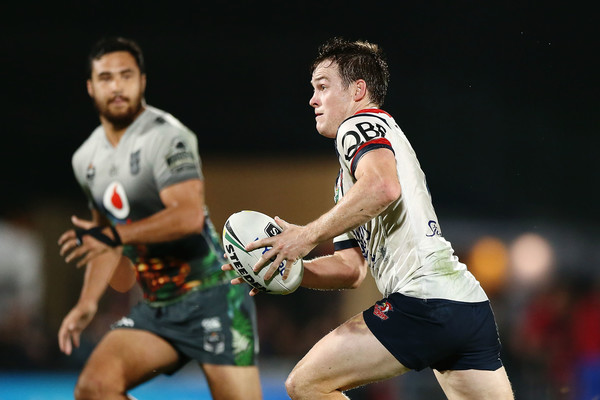 Latrell got another kick at goal after a penalty from Afoa for working on the ground,  but it was only in the seventy-sixth minute that the Chooks got their last try, as Liu spun around backwards to slam the Steeden over the chalk to bring the visitors to 32-0 once Mitchell had added the extras, and the Warriors to their first scoreless encounter since they lost to the Dragons at home in 2015. It was an eerie mood at Mt. Smart in those last five minutes – a mood that New Zealand will be desperate to put behind them when they take on Parramatta at ANZ Stadium next week.