The Storm doubled the Titans at 28-14 for the second of Saturday’s two matches at Suncorp Stadium, with Melbourne functioning as the home team despite travelling further afield. Still, Billy Slater and Cameron Smith feel sufficiently at home in Queensland for the purple army to have had the home advantage, at least in the opening minutes of the game. Nevertheless the Titans also gave the home team a genuine run for their money, desperate to come back from having conceded four straight tries to Canberra the week before, resulting in some of their very best sequences of the year so far.

The match started in Melbourne’s hands, with a series of wide passes from Felise Kaufusi, Cameron Smith and Cameron Munster allowing Curtis Scott to slice through the Gold Coast line four minutes in. Shortly after, offloads from Jarrod Wallace and Matt King seemed to give the Titans a chance to make a comeback, only for Slater to stick out a boot, collect the footy and then make his way back up to the Gold Coast forty, for what initially looked like the platform for a second Melbourne try.

While a Will Chambers error set the Storm back a bit, a slow peel from Wallace got them some decent field position, and on the second tackle they opted to take the two after Kevin Proctor was called offside. Yet despite a great take from Slater under the high ball moments later, this marked the start of a spotty period for the Storm, as some safe options from Smith and a couple of questionable passes setg the stage for a period of sustained field position and possession for the Titans. 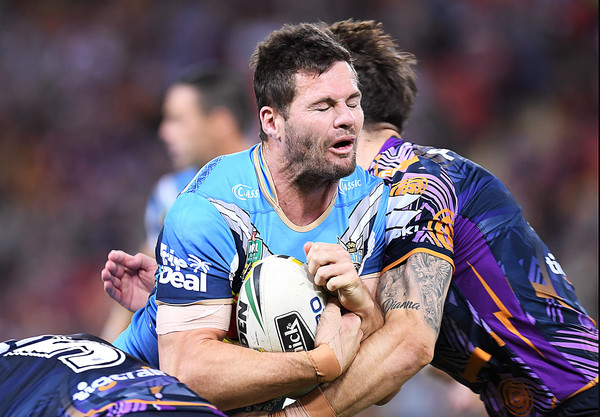 The turning-point was a contentious tackle from Brenko Lee on Josh Ado-Carr that got the Titans a repeat set, but could easily have gone the other way and resulted in a penalty and change in possession. A couple of tackles later, Lee scored on debut, after Taylor took the ball all the way to the line before popping it over to the ex-Bulldog, who twist and spun through Scott and Munster before reaching out a hand to ground the footy as calmly as possible with the two defenders on top of him.

Dexterous and gutsy at the same time, it was just the way to spook the Storm, and sure enough a rare error from Smith and Slater paved the way for the second Gold Coast try shortly later. With Smith mistiming a mid-field pass, and Slater dropping the ball, Mitch Rein scooped it up and then made about thirty metres, fending off Ado-Carr before coming to ground.

From there, Taylor made an incredible wide pass to Dale Copley, catching Chambers by surprise and forcing him to overchase, before the Gold Coast no. 3 fended off Kaufusi and then slammed through Ryley Jacks and Suliasi Vunivalu to get the Steeden to earth – a stunning way for him to announce his return after a three week absence. All in all, it was exactly the kind of kinetic, uncompromising, high-speed effort with which the Storm typically shock their foes, and they seemed shocked in turn, especially once Slater got himself tangled up in yet another uncharacteristic error.

This time Slater himself made the pass, which bounced off Chambers’ shoulder at a weird angle. Acting as quickly as Rein had before him, Philip Sami collected the Steede, and then got it across to Michael Gordon, who shifted it back to Sami on the inside for an even more galvanising and barnstorming run that Rein had made. To his credit, though, Slater made up for his error with an amazing trysaving chase, although a penalty on Ado-Carr for holding down allowed Gold Coast to make it a converted try lead after Gordo shot through the penalty kick a moment later. 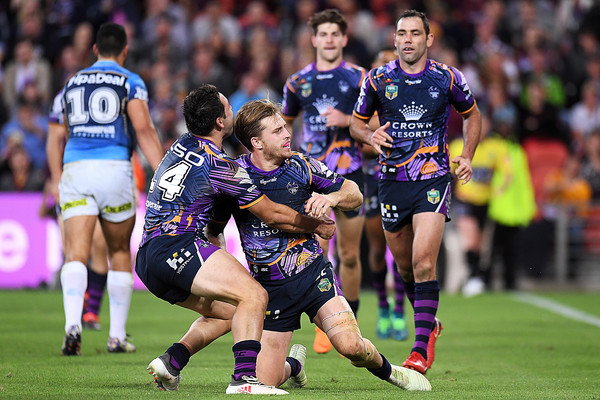 All in all, then, this was one of the very best periods of the year so far for Gold Coast, as a double movement and no try call for Brandon Smith moments before the siren brought Melbourne’s frustration to boiling point. The Fox, in particular, still seemed to be nursing a grudge from Lee’s tackle earlier in the game, and with thirty seconds to go he compounded his earlier penalty by tipping the ex-Bulldog on his head, getting the Titans one final shot before they headed into the sheds.

For a moment, this felt as if it might be the defining moment of the match for Gold Coast, as Taylor regathered all the team’s focus after a brief fracas with the Storm, by way of a brilliant fifty-five metre kick that he followed up with a field goal effort with ten seconds left on the clock. From the angle and trajectory, it looked as if the Steeden had to float through the posts, only for it to veer away at the last minute, as Gold Coast trotted off the field with the last points they would score over the night. 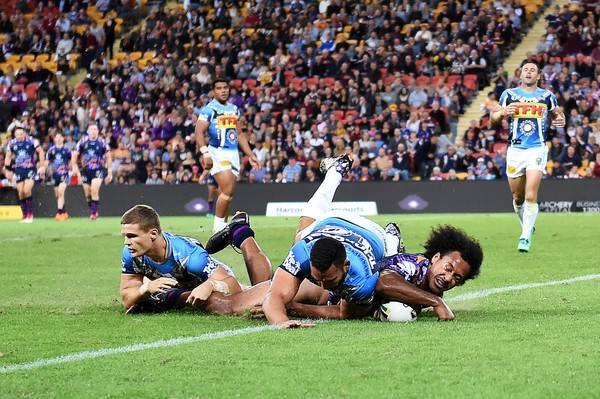 The second stanza saw a very sudden turnaround for the Titans, as the home team suffered a string of injuries that allowed Melbourne to gradually take control of the game again. The first was a groin tear for Kevin Proctor after a wishbone tackle from Smith, while a head injury for Jarrod Wallace and a fractured wrist for Keegan Hipgrave saw Gold Coast down to thirteen men by the time that Jack Stockwell headed out to the field. 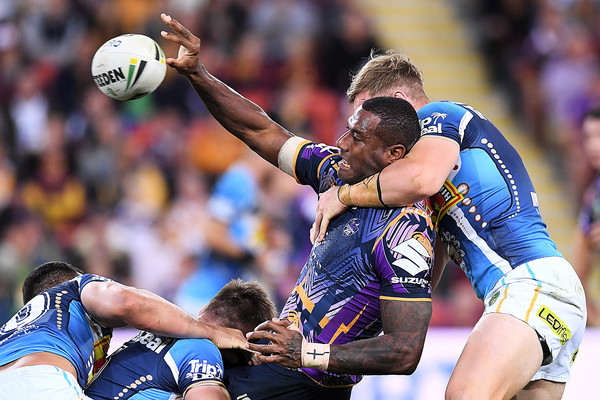 Meanwhile, Smith made yet another uncharacteristic error – this time a forward pass – only for Rein to pass the footy forward in turn on the next tackle, setting the scene for the next Melbourne try of the night. It started with a pickup on the ground from Munster, and ended with a monstrous offload from Stimson to send Kaufusi over the chalk with Copley wrapped around his legs and Ryan James slamming down from above.

With only thirteen players left in their arsenal, the Titans couldn’t afford any more errors, and Brimson mirrored Rein’s mistake a couple of minutes later, collecting the footy on the first tackle of an Ash Taylor-engineered dropout only to lob it ahead and return possession to the Storm once again. A couple of sets later, Smith got his team mates two more points after a penalty on King for holding down in the tackle, and while Wallace and Hipgrave were cleared to play at the same time, the Storm had managed to wrest control of the momentum of the match.

Ideally, the Titans wouldn’t have to resort to Hipgrave, who had suffered a fractured wrist, but the biggest hit-up of the night from Dale Finucane saw Stockwell now leave the field, forcing Hipgrave back onto the park as the Titans were once again faced with no bench. No surprise, then, that Munster scored four tackles into the next set, after a missed tackle from Lee. 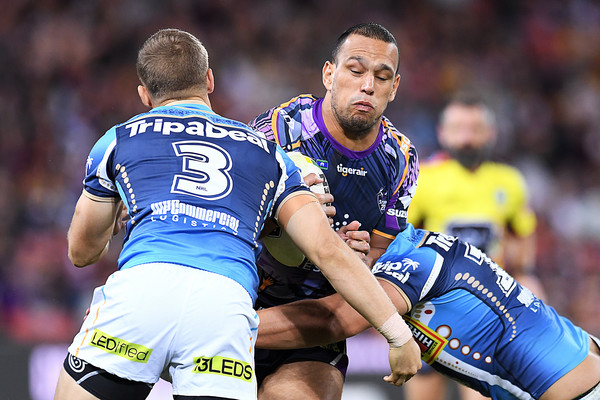 Seven minutes out from the end, the Storm found themselves with twelve players, after Christian Welch got in the way of Brimson for what could conceivably have been called a penalty try as much as a professional foul. Yet the Titans’ forward pass bungles came back to haunt them once again, as an error from Taylor quashed what little momentum had remained after Welch had shut down his halves partner. 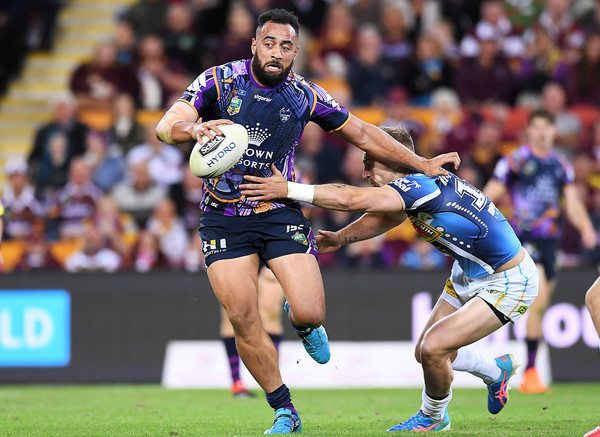 The Titans got one more chance with six minutes to go, when they made good headway up the field and opened up some space on their right edge. Taylor sensed the opportunity, and sent the footy across to Gordon, only for a well-timed tackle from Munster to thwart Gordon’s effort to send it to the right in turn. With the ball coughed up, Ado-Carr slammed in, scooped it up, and ran the length of the field to cross the line untouched.

As a spectacle in itself, this felt like a resounding and unquestionable Melbourne victory. Yet if the Titans had scored next, they might just have won it, while only their terrible string of injuries had dented their momentum, at the back end of what had ultimately been a pretty spotty night for the purple army, all things considered. They’ll be keen to tap into some of that quality, then, when they take on the Knights at Cbus next week, while Melbourne will be looking to streamline when they take on the Sea Eagles at AAMI Park.