After their stunning win over the Dragons in Round 10, the Rabbitohs were looking for a victory lap when they took on the Cowboys at 1300SMILES on Saturday night. Eighteen months ago, the motivation of a home game would have been enough to almost guarantee North Queensland the match, but this year Johnathan Thurston hasn’t been able to sync up with the local spirit like he once did, resulting in losses to the Raiders, Dogs and Panthers at what was once one of the NRL’s biggest fortresses. 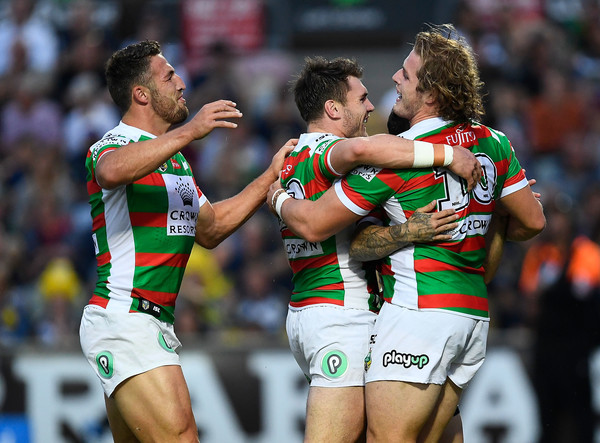 If the Cows won over the Bunnies, they would be at three home losses and three home wins, while if they lost, the number of home losses would be double the number of home wins. Coming away with the competitition points was therefore just as important for team morale as for their chances of success later in the season, resulting in a fairly high stakes game for both parties, although for different reasons. 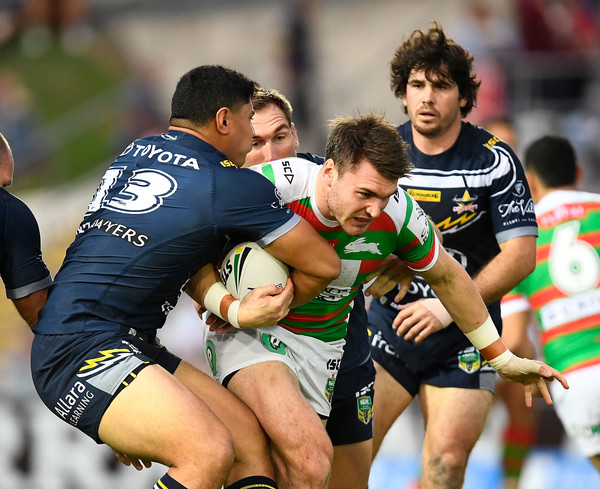 South Sydney were dominant from the outset, with an early linebreak from Campbell Graham and a penalty on Thurston for flopping paving the way for a clinical fourth-minute try from George Burgess. Seeing J.T. making an error so early in the match was pretty dispiriting for the Cows, and yet it was Cody Walker who lost his cool, remonstrating with the referee so emphatically in the wake of a penalty for being offside within the ten that he was abruptly sent to the sin bin for his troubles. 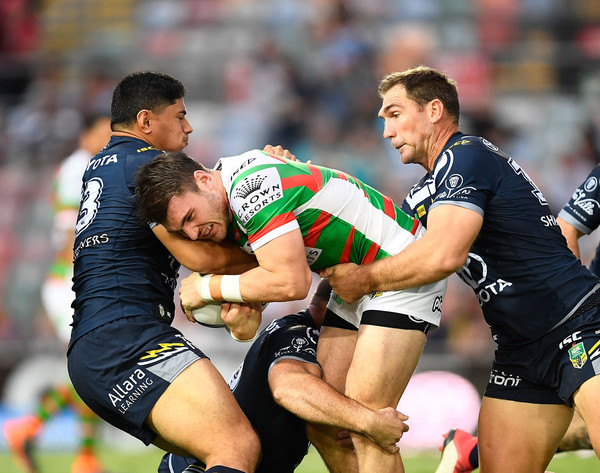 It was a silly move for a team that were six points ahead, and yet for a moment it looked as if the Bunnies might conform to the wider pattern of Round 11 so far, in which teams have bizarrely benefited from having a man off the field. Conversely, the spectacle of seeing Walker sent off seemed to make the Cows even less organised, granting South Sydney two penalty goals over the next few minutes. The first came after an error from Coen Hess, a slow peel from Matt Scott and a strip from Jake Granville, and the second after Justin O’Neill was called offside and Hess was penalised for having a hand in the ruck, in one of the messiest sequences for North Queensland this year, who felt like the team with twelve players on the park. 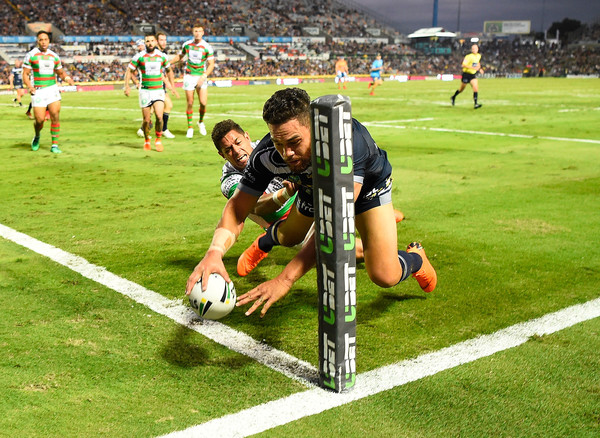 It was to their credit, then, that the Cowboys managed to regroup, on the back of a sequence that started with a fairly standard crossfield kick to the right corner from Thurston. Once the footy arrived, Hymel Hunt didn’t face any real challenge in collecting it and returning to the field of play, but when he coughed it up on the first tackle the Cows were given a chance to have the set over, especially once they got a penalty on the very next tackle, consigning the last several minutes to a rough draft. 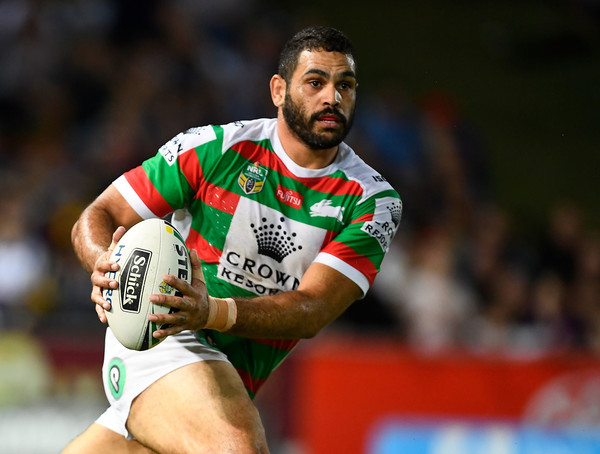 From there, both Michael Morgan and then Matt Scott came remarkably close to crashing over, thanks in part to a South Sydney line that was still slightly disheveled after seeing Hunt’s opening tackle come to nothing. At the same time, the Bunnies did a good job of scrambling their defence together in the middle of the field, forcing the hosts to send the Steeden through Granville, Thurston and then Morgan, who sent it across to Antonio Winterstein to put down their first four points in the corner.

For the first time in the evening the Cowboys had really seemed gel, although special mention has to to Morgan for his split-second pass just as Campbell Graham was jamming in. Seeing Thurston boot the footy through the post was also a good sign, cancelling out his opening error to make it really feel as if North Queensland were back in the game, and had managed to make something of Walker’s early absence. 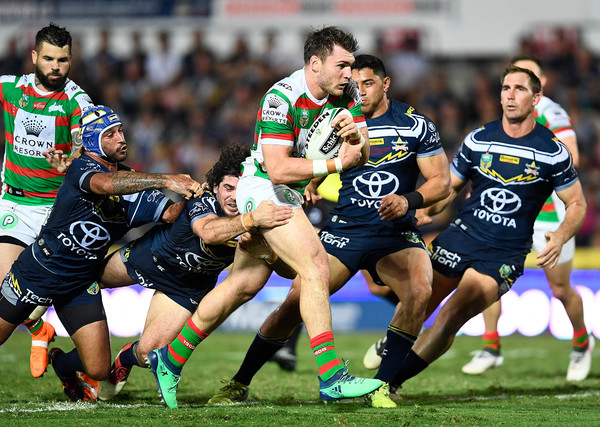 The Cowboys continued to consolidate over the remainder of the first stanza, clocking up a penalty goal and then managing two goal line dropouts, both orchestrated by Thurston and both at Inglis’ expense. Still, the fact that North Queensland had taken the two at all was a testament to their discomfort on the field, and the same thing happened again shortly into the second stanza, after G.I. put in a brilliant double-dummy to break through the line and get the ball up the other end, only for Hymel Hunt to be dragged into touch by Thurston and Morgan. 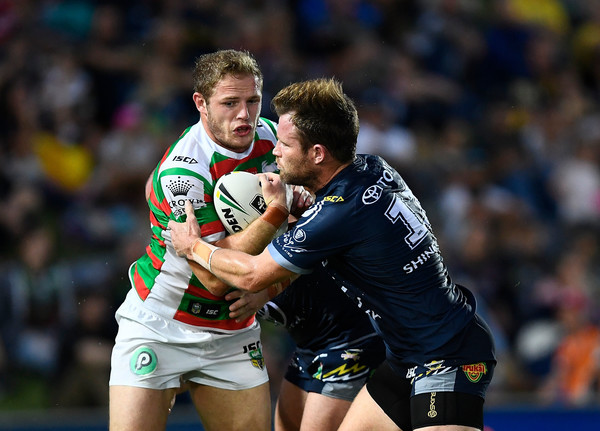 It was the kind of defensive effort that should have enhanced the Cowboys’ confidence, but when South Sydney were called offside at the end of their next set Thurston lined up the tee once again to make the score 8-12 the Rabbitohs’ way. Seeing North Queensland unwilling to make a shot at the line, even after Morgan and Thurston’s effort on Hunt, seemed to galvanise the Bunnies in turn, and only a couple of sets late Damien Cook sliced through the line like it was butter, running twenty metres from dummy half to crown his claims to a New South Wales jersey. 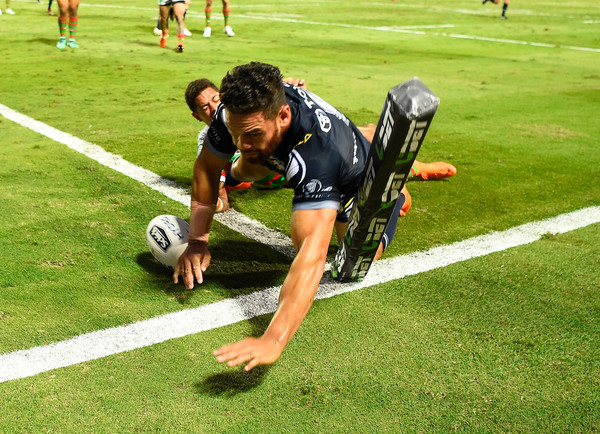 Over the next fifteen minutes, the Cows tried to make good on their opening try, but they couldn’t quite seem to pull it off, despite a few errors from the Bunnies that seemed to open some room to move. For a while, the closest they came was a reprise of their opening four points, as Antonio Winterstein headed for the corner only for G.I. to pull him back from landing the footy, as Dane Gagai hopped on top and forced him to knock it on, in one of the very best trysaving tackles of the night. 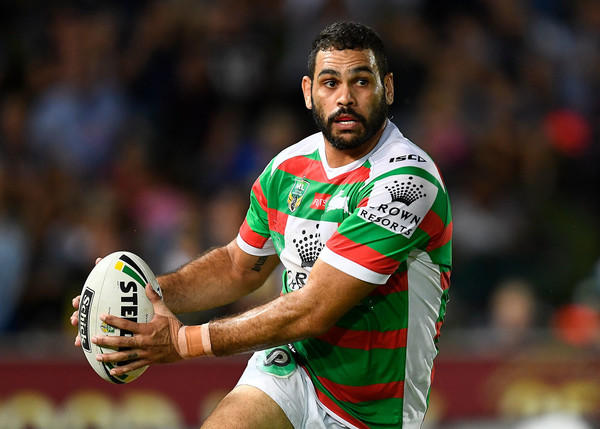 With Sam Burgess taken off early in the match, and Matt Scott also off in the second half for a suspected ACL injury, things were getting desperate, and the Cows responded by doubling down on the one formation that had generated points so far. Sure enough, then, when they received a penalty on their line eleven minutes out from the end, they opted to tap and go for what felt like the first time in weeks, setting up Winterstein perfectly to crash over with Gagai unable to get him this time.

In the way it reprised the big winger’s opening try and made on good his more recent almost-try, this felt like a significant shift in momentum, especially once Thurston added the extras and Reynolds booted the restart out on the fall. For a brief moment, there was the same sense of serendipity that hung over the Cows at the end of the 2015 grand final, and there was something of the excitement of finals footy as Morgan slotted through a field goal at the 74th minute to make it 19-18. 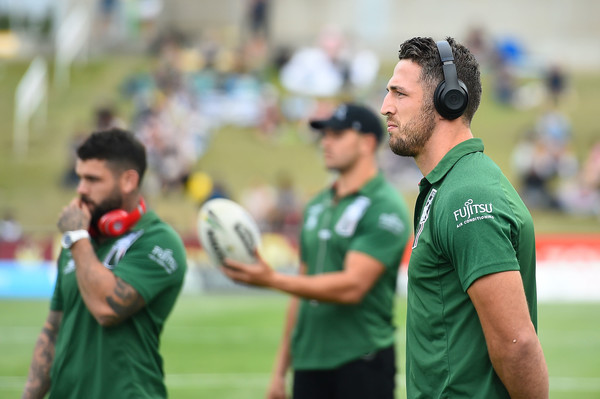 From there, the Cows seemed to be sitting pretty with a goal line dropout at the seventy-eighth minute, but a sudden shift in possession saw the Bunnies rapidly getting down the other end. Still, North Queensland managed to scramble to defend them, even as the cardinal and myrtle set everything up for a final field goal if they couldn’t manage to cross over. When the last tackle came, Reynolds missed the uprights, but with Granville called offside, it didn’t really matter, since the South Sydney halfback was given a shot another two points directly in front of the posts.

For a match that had been so defined by penalty goals this felt like an appropriate ending, especially since it marked the point at which the Bunnies broke the 3-3 penalty goal deadlock. Still, it was a heartbreaking way for the Cowboys to lose, and will surely sit with fans and with the team for some time, even if they manage a win over the Storm at 1300SMILES next week. Meanwhile, this was too close a game for Souths to really continue the momentum of their game against the Dragons, so they’ll be looking for a more decisive win over the Warriors when they meet in Auckland next week.