Saturday night’s game between the Storm and Sea Eagles at AAMI Park was not only the most visceral game of the 2018 NRL season so far, but one of the most visceral in years – grand finals included – featuring four sin bins and the first send-off since 2015 after Curtis Scott clocked Dylan Walker in the face halfway through the second stanza. After spending ten minutes playing with an eleven man team, Manly nevertheless managed to keep Melbourne tryless, in an extraordinary sequence that will almost inevitably crown the highlights reel at the conclusion of the 2018 season.

For a game that ended so dramatically, however, things started in a fairly nondescript way, with the first forty minutes driven almost entirely by penalties and penalty goals, leaving both teams two apiece at half time. While Manly were professional if unadventurous, the Storm were pretty clunky in the absence of Cameron Smith, and would grow even messier as the game wound down in the second stanza. Still, the stage was set in these opening passages of play, with Apisai Koroisau managing to knock the football out of Billy Slater’s hands about ten minutes in, and Slater himself then losing the ball halfway through the following set.

Here, as throughout the game, Melbourne weren’t short of opportunities, but were unable to make the most of them, with Brandon Smith’s loss of the footy on the back of a differential penalty foreshadowing most of what was to come. A slow peel from Christian Welch was all the Sea Eagles needed for Daly Cherry-Evans to kick through the first two points of the night, although they would end up twenty points ahead by the time they had disposed of the Storm in the final fifteen minutes of the match. 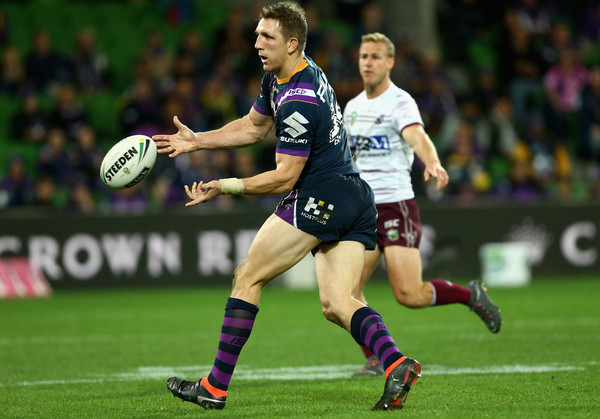 If anything, Melbourne probably played at their best towards the end of this first stanza, with Slater orchestrating a goal line dropout at the thirty-second minute with a beautiful grubber that Suliasi Vunivalu forced Akuila Uate to clean up right on the dead ball line. Without Smith’s organising presence, Slater had been compounding his fullback duties by foregrounding his efforts with the boot, and this kick was one of his best moments so far, especially once the Storm got a penalty on the next set and chose to tap and go rather than take a shot at slotting through their first two.

They decided to kick, though, on the back of two successive penalties from Dylan Walker, the first of which came for a bit of heavy-handed treatment in the tackle, paving the way for the punchup that would break out a bit later on. With Muster adding the two points, and DCE given a formal warning from the ref, things were starting to get precarious for the Sea Eagles, and sure enough Jake Trbojevic was sinbinned two minutes out from the end for an early tackle, bringing the 2018 sinbin count the highest it’s been since the 2000 season, with three more to go that night.

Nevertheless, an obstruction from Tim Glasby meant that Melbourne’s field position came to nothing. While the teams might have been 2-2 at halftime, that scoreline alone looked very worrying for a Storm outfit that are used to smashing their opponents by the time that they head into the sheds, or at least leaving the field with a try or two under their belts. To their credit, they managed to get an extra two points when they returned to the field on the back of a pair of penalties from Addin Fonua-Blake and Shaun Lane, but this was the first and last time that the Storm would be ahead on the board, and the last points that they would score that night.

In keeping with the general trend of 2018, the Sea Eagles actually ended up doing better with less men on the field, after DCE booted the footy towards the sideline to eat up the last minute before Jake Trbojevic returned to the field. As it turned out, this kick paid higher dividends than even the Manly halfback seemed to have planned, decelerating so slyly as it hit the corner that the Storm ran, hesitated and all but seemed to have given up on the play, before Matthew Wright stormed up beside them and put down one of the most spectacular groundings in several years. 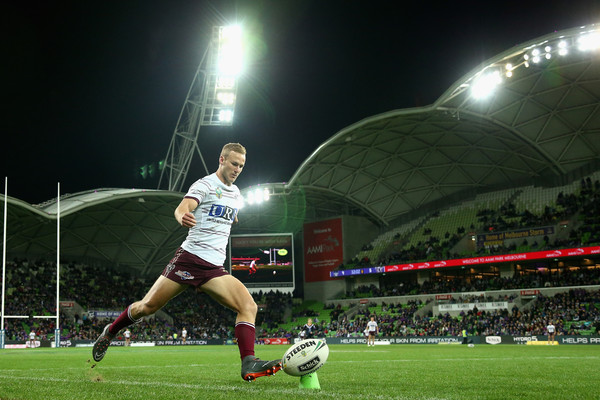 In slow motion, it was a thing of beauty, and looked more like ballet than footy, as Wright collected the football after it had actually cleared the dead ball line and planted it back in the field of play moments before his fingertips grazed the grass. It was the kind of footage that makes you realise that wingers have to think in slow motion to perform at such high speed, and while it may have cost the Manly flyer his hamstring, he went out in glory, for possibly the best Sea Eagles moment this year. 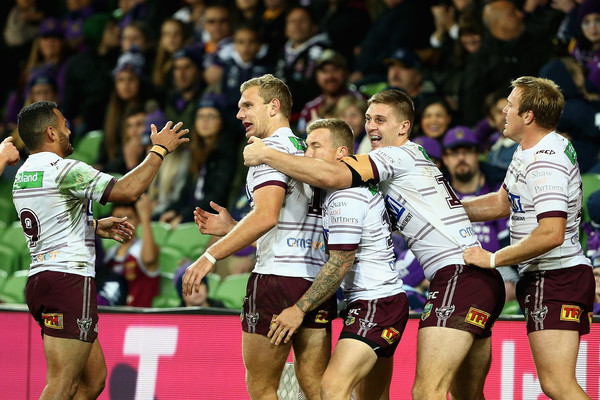 It wasn’t just the dexterity but the determination of this play that made it so rousing for Manly, since it was Wright’s refusal to ever give up on the kick that got him in position to ground it in the first place. Seeing him taken off was hard, but the silver lining was that Trent Hodkinson got the opportunity to debut his Manly jersey at this critical juncture, trotting out to the field for his first touch since leaving the Knights. 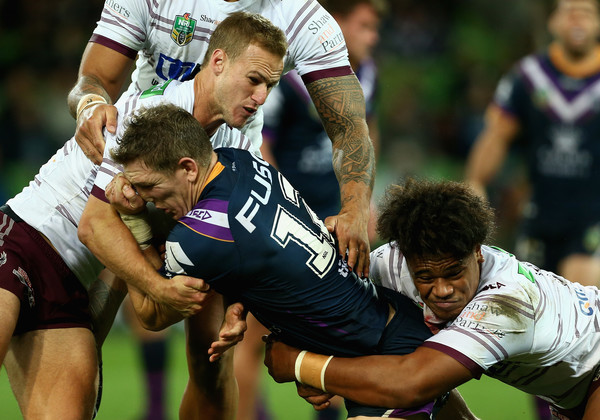 If the Storm had been disorganised at the start of the game then they were utterly disheveled now, with both wingers making errors in the space of as many minutes, and then an error from Scott, and some more sledging from Walker, leading to the most volatile moment of any NRL game this year. All night, things had been building between these two, and it lead to a bit of pushing and shoving here, only for Walker to come back with a further spray and Scott to break loose with a volley of punches.

The first only grazed Walker on the cheek, but the second found him straight in the face, in a sudden reprise of the Battle of Brookvale. Within seconds, Walker’s eye was completely swollen up, and Scott was sent off for the remainder of the game, but in an extraordinary sequel Walker was also sent to the bin, presumably for having spent so much of the match inciting the Melbourne centre. To make things even more incredible, the Bunker instructed Henry Perenara to send off Apisai Koroisau as well, a good decision since the replay showed that he’d come in from the right side to get a piece of the action, and that his fist had made contact with Scott.

In a bizarre sequence of events, then, Melbourne had one player off and Manly had two. Being down to eleven men didn’t prevent them scoring, though, on the back of a succession of errors from both teams – Uate, Smith, Hodkinson, Thompson and finally Hoffman – before Uate slammed through Vunivalu to make it to the corner. On its own terms, this was a slick, if standard try, but in the context of this particular match it felt utterly momentous, and the very pinnacle of the strange series of games, in Round 11, in which teams have done their best with a depleted lineup.

With fifteen minutes to go Uate put in a trysaving tackle on Will Chambers that was every bit as momentous as four more points. Shortly after, DCE put in a beautiful kick on the final tackle, inflecting the ball off the outside of his boot to send it right beneath the posts, where it sat up perfectly for Tom Trbojevic to put down four points. With Hodkinson adding the extras – amazingly, the only conversion of the night for the Sea Eagles – the visitors were now comfortably ahead on the board. 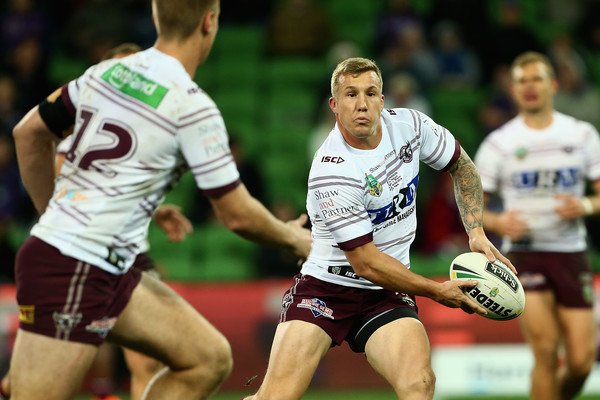 In another kind of game, the Storm might have bounced back, but things just continued and even intensified in this direction, with Josh Ado-Carr committing a professional foul on Tom Turbo to become the fourth player of the evening to be sent to the bin. With the Storm having now completed at only 56%, the mood at the stadium was pretty muted, and it didn’t help that Moses Suli crashed over with four seconds to go to mark his Sea Eagles debut more emphatically than he ever played for the Wests Tigers, in the most decisive moment of his own career to date as well.

All in all, then, this was an utter decimation, and even if the Storm manage to win their next couple of games, it’s going to take a bit of time to really put it behind them. Conversely, it must be comforting for the purple army to know that Smith won’t be leaving them for Origin, given the impact his absence had on the troops, although it does beg the question of whether Slater’s Maroons stint might prove just as debilitating. On the other side of the Steeden, this was one of the most glorious Manly moments of the last few seasons, sin bins notwithstanding, and they’ll be looking to maximise this momentum when they take on the Cowboys at Lottoland.