With only two wins to their name this season every game is a desperate game for Parramatta at the moment, but their heartbreaking last minute loss to the Sharks in Round 9 compounded by their loss to their traditional Canterbury-Bankstown rivals in Round 10 meant that Friday night’s match against the Warriors at ANZ felt even more desperate than usual. On the other side of the Steeden, New Zealand were coming off a devastating 0-32 loss to the Roosters that felt light years away from their form at the beginning of the season, and needed a victory as soon as possible when they fronted up to face the Eels for a Parramatta home game at ANZ Stadium.

Parra were actually the first to put down points, thanks to a penalty goal at the seventh minute. From there, however, the first stanza mainly belonged to New Zealand, who scored their first try shortly after Cameron King kicked the ball too far midway through an early tackle count. The four points were a classic Warriors effort, with David Fusitua making for the right corner where Corey Norman shoved him into touch, as every part of his body was left hanging above the field apart from his hand and the football, in one of the gymnastic displays Fusitua makes seem so effortless. 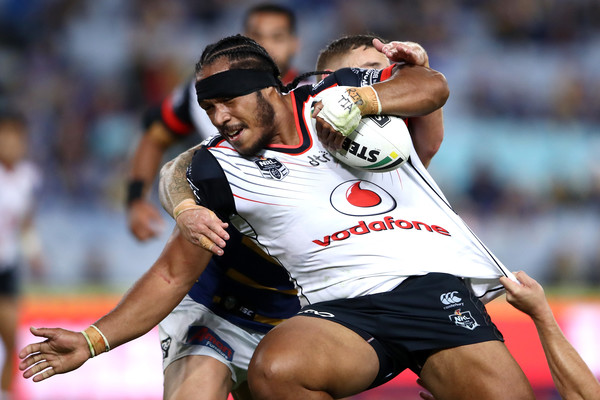 A knock on from Michael Kennings during a tackle from Issac Luke and Tevita Satae just enhanced the Warriors’ momentum, and with a penalty early in the next set they took the two to put themselves a converted try ahead. For a moment, the Eels seemed to have got a bit of headway a few sets later, thanks to a good hard run from Daniel Alvaro and a penalty a tackle after, only for Tepai Moeroa to lose the footy right on the New Zealand line. While we’ve seen the full gamut of facial expressions from Parra this season, few players have looked so sombre as Moeroa at this point, for what, in many ways, felt like the defining image of the entire game.

It wasn’t long before the Warriors scored again in the opposite corner, although this time the buildup was considerably more dramatic. At the start of it all, Mason Lino sent across a beautifully weighted crossfield kick, which Ken Maumalo managed to knock back before Parra hands could get to it, sending it into open space for Peta Hiku to clean up. So far, so good, but then with Hiku slipping over on the dewy turf the tryscoring opportunity seemed to be over, only for Hiku to put in one of the plays of the game to get right up and run over George Jennings for four more points. 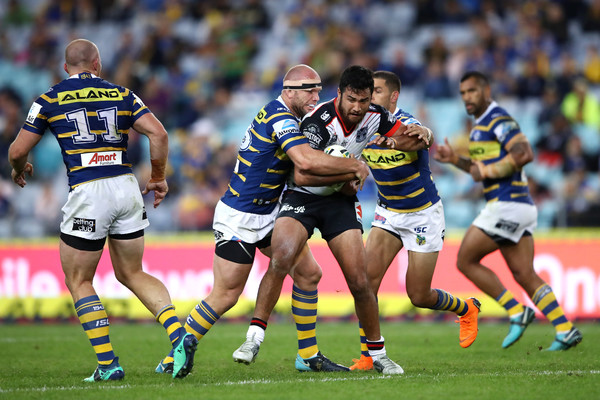 Bookended by Lino and Hiku, who were standing in for Shaun Johnson and Roger Tuivasa-Sheck respectively, the try was a great rallying-point for a New Zealand outfit without two critical members of their spine. It was just as much a testament to their determination, too, since Hiku hadn’t demonstrated any special play to get across but had just never given up on the play, despite Jennings and the entire Parramatta right edge defence assuming that his only option was to give up on it.

The Warriors were now ten points ahead, but things started to go against them a bit as the siren loomed, thanks to a series of penalties that saw Isaiah Papali’i being sent to the bin after being a given a penalty for being offside, and then another penalty for flopping, following successive penalties from Luke and Hiku as well. For the first time of the evening, Parra had the competitive advantage, and with Mitchell Moses sending through a deft grubber the Eels gained a dropout with three minutes to go.

Yet with Michael Jennings knocking on midway through the next set during a combined tackle from Maumalo and Blake Green the Eels lost their edge as quickly as they had got it, and found themselves heading into the break with only a lone penalty goal to their name. For a moment there, it almost looked as if the Warriors might have another shot at a point after Parra were penalized for a slow peel, with Lino attrmpting a drop goal, but the difference remained at ten as the siren rang out.

Given that the Eels haven’t won a game this year where they were behind at half time, and given the prospect of taking on the Broncos at Suncorp next week, they needed to come back onto the park in the second half looking like a different team. They did so, too, with a hard run from Beau Scott setting the foundation for a try from Clint Gutherson in the corner – a cathartic response to Gutho’s heartbreaking defensive slipup the week before, and a good riposte to the Warriors’ two wing tries. 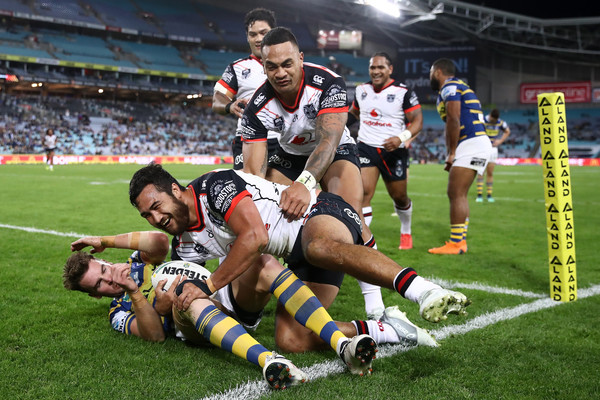 A nice kick from Moses capped it off, as the ex-Tiger sent the footy swerving to the left only for it to bend back at the final moment, in what felt like a promise that the Eels could also self-correct if they just ground in now. Not surprisingly, Parra followed with their best period of the game so far – a sustained bout of possession and field position that started with a terrific offload from Takairangi to Smith, and was compounded by an escalating series of penalties and errors from the Warriors. 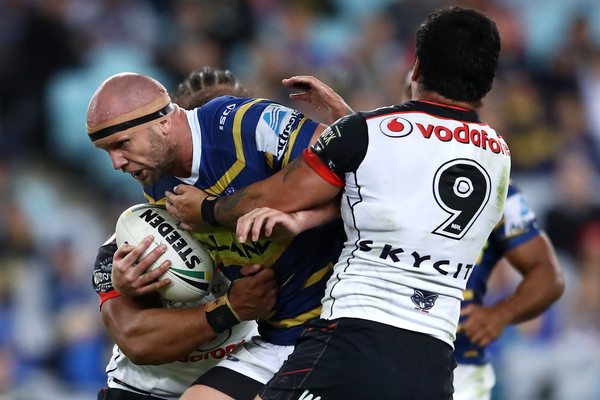 It came to nothing, though, with Moses following up a dropout-gaining grubber with a dummy kick on the final tackle of the final set, sending the ball across to Norman who booted it through just as Fusitua got in place to clean it up without a hitch. Seeing Scott forced to leave the field was another downer, especially after his issues with injuries this season, but Moses made up for it with a massive kick that forced Hiku to take it one-handed on the line, where George Jennings sent him into touch.

It was one of the moments in the evening where RTS’ absence was really felt, and the Eels seemed to sense that vulnerability, with their big men now making their strongest effort of the night to put down another four points. Collecting the Steeden ten metres out from the line, Peni Terepo sent a short ball across to Manu M’au, who simply slammed through three of the biggest New Zealand defenders to get the Steeden planted, for the gutsiest single try of the entire Parramatta season so far. 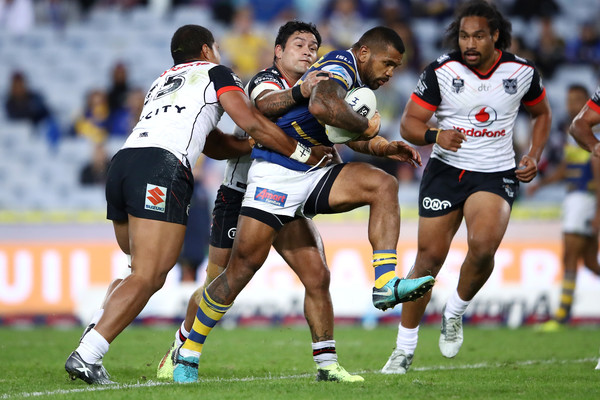 The try brought them level, and the kick from Moses put them two ahead for the first time since the Warriors had notched up their first try. The lead was short, though, with Moses now setting the platform for the next New Zealand try – first, with a penalty for a leg pull that stopped the Eels’ momentum in its tracks; then, by failing to collect a grubber from Blake Green right on the line, leaving the ball bouncing for Jazz Tevaga to put down another four points for the visiting footy team.

To be fair to Moses, the bounce on Green’s grubber was almost impossible to contain, even when French came from above to try and handle the ricochet. Still, this was a big change in momentum once again, and the trash talking accelerated over the next five minutes as both teams dug in to score the next four points. Yet the fact that it was only four points, and that a field goal wasn’t on the table, probably made New Zealand more determined, and sure enough Luke crossed over for a hard-won, short-range try that was the perfect last word after Terepo and Mau’s gutsy efforts. 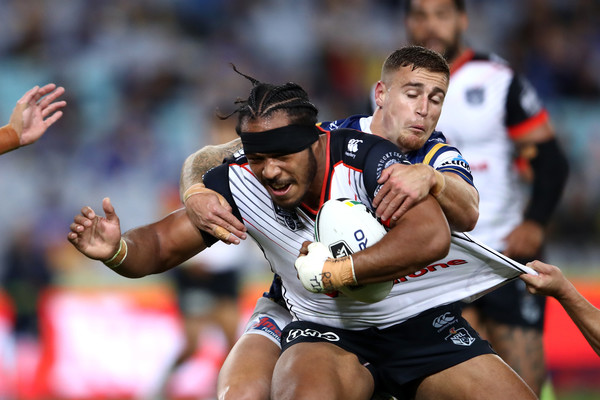 The try was all the harder for the Eels in that it had all started with Michael Jennings losing the footy at the other end of the field, and the mood was decisively sombre amongst the blue and gold players as they headed into the sheds. They’re going to just have to make their best effort against the Broncos next week, while the Warriors will welcome the home side advantage when they take on a Rabbitohs outfit galvanised by their last-minute, one-point victory over the Cowboys at 1300SMILES.